Henry Healy spent March 17, St. Patrick's Day, at the White House in Washington. His distant cousin Barack Obama had invited him. The US president has Irish roots on his mother's side of the family. "We went to a bar for a pint of Guinness," recalls Healy.

Last week, however, Healy, an accountant from the small Irish town of Moneygall, was no longer in a celebratory mood. "Joined the ranks of the recession brigade today!! #unemployed," he wrote in a Twitter message. His employer, an Irish supplier to the construction industry, had laid him off after six years. It was probably inevitable, Healy says without bitterness, pointing out that "the construction industry in Ireland is rapidly downsizing."

Healy is one of hundreds of thousands of Irish who have lost their jobs. Since 2008, Ireland has been struggling to overcome the financial crisis -- and can't seem to get back on its feet. The unemployment rate has stagnated at roughly 14 percent for months on end. Many young Irish have decided to leave the country altogether.

In 2010, the European Union had to support the country to the tune of €67.5 billion ($84 billion). Ireland's local banks had gambled and lost on real estate loans, and had been bailed out with comprehensive state guarantees. Soon thereafter, the Irish and their fellow Europeans throughout the continent had great hopes that the worst was over. Recently, the Irish were considered a paragon for the entire euro zone. In 2011, the economy even grew, albeit only by 0.7 percent. But such confidence proved illusory.

As things now stand, Ireland will have to be bailed out a second time. The banks have proven to be a bottomless pit. They have to be recapitalized once again. The previous write-downs of the 10 largest consumer banks, amounting to €118 billion, are still not enough.

The country's financial woes were also the main topic of last Thursday's referendum, in which the Irish voted on the European fiscal pact. The majority of voters reluctantly backed the pact, initiated by German Chancellor Angela Merkel, which aims to impose budgetary discipline on countries and prevent the excessive accumulation of debt. Ultimately the Irish were motivated by the fear that the Europeans would otherwise cut off the flow of money.

On the evening before the referendum, European Affairs Minister Lucinda Creighton was still canvassing door to door in her Dublin electoral district to discourage voters from supporting the "no" campaign. The politician relentlessly pointed out to the many skeptics that Ireland will need €18 billion in 2014. It will take €10 billion, for instance, to pay teachers' salaries and support the unemployed, she argued. The opponents of the fiscal pact, she argued, couldn't say where the money is supposed to come from.

Paying for the Sins of the Past

This argument apparently convinced many of her fellow Irish. Indeed, only those countries that have signed the fiscal pact can expect to receive aid from the European Stability Mechanism (ESM), the permanent euro rescue fund which will be launched this summer with a war chest of €700 billion. Officially, at least, the Irish government is sticking to its plan to return to financing its budget deficit on the capital markets as soon as possible. But during their election campaign, even government ministers sowed doubt about the feasibility of this idea. Interest rates on long-term Irish sovereign bonds have risen to well over 7 percent since mid-May, in part due to the turbulence in Greece and Spain.

"The situation continues to be very serious," says Stefan Gerlach, deputy governor of the Central Bank of Ireland. Ireland's budget deficit is still over 9 percent of gross domestic product, which is significantly higher than in Spain or Portugal. "As an extremely open, export-oriented economy, we are directly dependent on developments in other European countries," explains Gerlach, who was born in Sweden and, until the fall of 2011, taught economics at the University of Frankfurt.

It is above all the financial sins of the past that continue to trouble the Irish. Five of the country's six main banks have been nationalized and received a total of €64 billion in support. The Central Bank of Ireland has provided an additional €40 billion in emergency aid, and all euro-zone member states have contributed billions more in aid via the European Central Bank (ECB). But that's not the end of the story. The banks need an additional €3 billion to €4 billion in fresh capital, according to a cautious statement by the central bank.

Even that is unlikely to be enough, though. There are ghost towns in Ireland where nobody wants to live. The newspapers are full of reports of liquidators looking to sell off real estate. In contrast to the situation one year ago, though, these days this leads to actual sales because prices have gradually dropped to a realistic level.

A group of hotel employees was able to purchase their rural hotel for €60,000, despite the fact that it had been built for many millions just a few years ago. Broc House, a three-story apartment block from the 1970s located directly next to a Dublin golf course, is currently on sale for €1.2 million. This is an 87 percent discount on the price from the year 2006.

Joe Kiernan, 55, a muscle-bound man with a crew cut, experienced the 12 wild boom years while working for a wrecking company. None of the old brick buildings in the Dublin inner city was safe from his wrecking ball and the bold plans of the real estate developers. During the boom years, such entrepreneurs set out to make the Irish capital fit for the future. "Sometimes it did seem like a shame," he says.

Today, Kiernan is standing in front of the unemployment benefit office on Redmond's Hill. For the past two years, this specialist for demolition and groundwork has had to report here once a month to receive his weekly allowance of €188.

This is enough to pay for Kiernan's self-rolled cigarettes, his beer and his rent. He is glad, he says, that he "never listened" to the banks that were determined to talk him into taking out a mortgage. Others were not so wise.

Over 10 percent of all real estate loans are plagued by irregular payments. Central banker Gerlach admits that an even greater number of loan agreements may be affected by delays in payment. "These arrears are one of the greatest national problems," he says. When the borrowers can no longer pay, the properties end up in state hands via the nationalized banks.

Until now, most financial institutions have not seriously tackled the problem of bad loans. The bankers are hoping for a miracle. Real estate prices have fallen by nearly 50 percent, which is lower than in the US, Spain or the other crisis-ridden countries. The track record for payments is so dismal that last week banks asked their customers not to finance their planned trips to the Euro 2012 soccer championship in Poland and Ukraine by skipping the interest payments on their loans.

Now, the central bank has set a deadline for the banks to finally abandon their policy of sticking their heads in the sand. "The banks need to know which loans can never be repaid and where adjustments may help," says Gerlach.

A new personal bankruptcy law aims to help individuals free themselves from the debt trap. The idea is sound enough. But analysts at Deutsche Bank are already warning of the billions in write-downs that this will entail.

In order to make life easier for the banks and ultimately itself, the government is resorting to all manner of tricks. According to conditions established by the ECB, the nationalized banks are supposed to pay 9 percent interest on the €31 billion in aid that they have received. Last month, the state itself borrowed money -- no less than €3.1 billion -- so that it could transfer the interest payments.

Ireland is being "disproportionately burdened" by the interest on the bank aid, says European Affairs Minister Creighton. She anticipates proposals from the ECB that would significantly reduce the interest rates.

A Knack for Recovery

So it's not surprising that this small nation is currently highly supportive of a proposal made by the Spanish, which would allow the ESM rescue fund to directly bail out their banks. Should the Spanish manage to push through their demands, the Irish are hoping that they would have a right to the same benefits. This approach has already worked once in the past. When the Greeks were granted low interest rates for financial aid from the EU and the International Monetary Fund (IMF), Ireland was also able to negotiate a discount.

Aside from that, there are major differences between Greece and Ireland. Thanks to low corporate taxes, a well-educated workforce and a functioning administration, the republic boasts -- in contrast to Greece -- an intact business and social model, including tax benefits.

American companies, in particular, are attracted to Ireland. Google, Facebook and Twitter have located their European headquarters here. Apple has pledged 500 new jobs. Intel also intends to produce its new generation of chips in Ireland and other locations.

And even Healy, the relative of the US president, is confident that he'll soon have a job again. The future, he says, belongs to the knowledge industry, arguing that he has excellent opportunities with his degree. "The grass on our island is growing again," he told the concerned president during his visit to Washington. The Irish, he told Obama, are very familiar with standing up again. 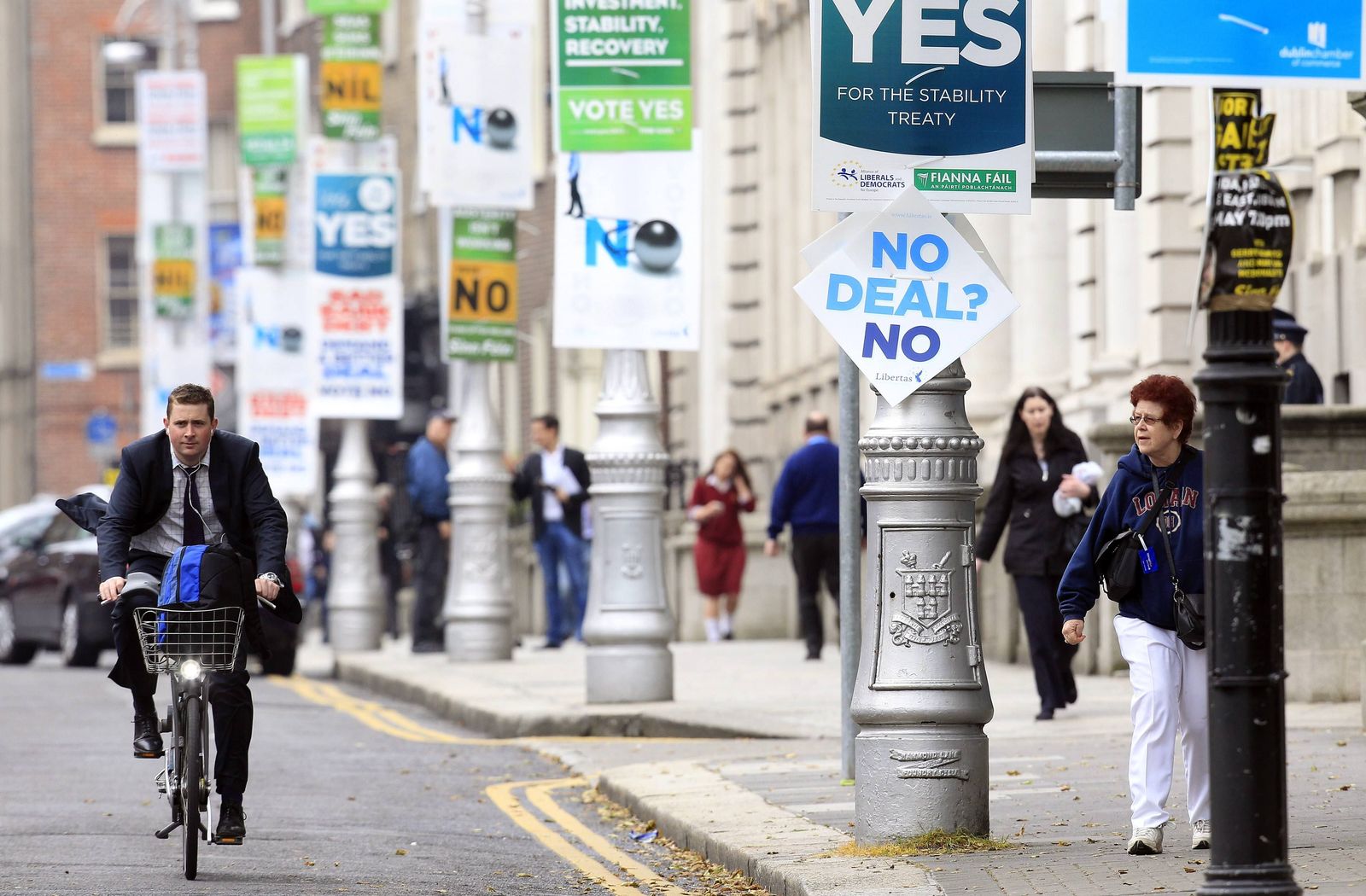 Posters for the fiscal pact referendum in Dublin (May 30 photo).