Though past referendums on European Union issues in Ireland have proven to be problematic, this time things are expected to go off without a hitch. When the Irish vote on the EU "fiscal compact" treaty on Thursday, their clear approval is expected. Polls predict that some 60 percent of the voters will tick the Yes box on the controversial treaty, which commits all ratifying members to fiscal responsibility.

But as certain as a majority vote may appear, German Chancellor Angela Merkel will nevertheless be anxiously focused on the activity in Dublin on Thursday. In the past, the Irish have repeatedly proven to be both unpredictable and resistant to being told what to do. Should they reject Merkel's fiscal pact, it would be a further setback for the German chancellor following the election of Socialist François Hollande in France.

Though the fiscal pact can still go into effect without Irish approval -- it only requires ratification from 12 of the 17 euro-zone countries -- a vote against it would be highly symbolic. After all, the Irish are the only Europeans allowed to vote on the treaty. On top of that, it would once again make investors on the financial markets question whether the euro zone has a future.

In recent weeks, debate on the treaty has become highly emotionalized on the Emerald Isle. Opponents of the deficit-fighting measure complain they are being forced into voting for it. Opposition leader and Sinn Fein leader Gerry Adams has accused conservative Prime Minister Enda Kenny's coalition of using fear tactics to gain voter support. The left-wing party has called on their countrymen to exercise civil disobedience. "Your gut is telling you to vote No," Sinn Fein parliamentarian Pearse Doherty wrote in guest editorial for the Irish Times on Tuesday. "Trust your instincts."

Indeed, the government has steadily been increasing pressure, with Kenny reminding voters that Ireland will lose access to the EU's future emergency loan fund, the European Stability Mechanism (ESM), if it fails to ratify the treaty -- funds the country will likely need at the end of 2013, when its existing bailout loans run out. A return to the financial markets is nowhere in sight, with interest rates on 10-year Irish bonds still over 7 percent.

"I'm recommending a Yes vote on Thursday so that we can protect that recovery and investment," Kenny wrote in a guest editorial for the Irish Times on Monday. "Voting No would slow us down and bring great uncertainty at a time Ireland definitely doesn't need it," he wrote, adding that now is not the time to take risks. The fiscal pact is a "vital insurance policy" for the country because it will maintain access to the ESM, he added.

Finance Minister Michael Noonan has been even more explicit, saying early this week that a No vote would keep foreign investors away and paralyze economic growth. Without access to the ESM, he said, austerity measures would have to be even more severe in the coming year, he said. The National Treasury Management Agency (NTMA), which is responsible for the country's cash flow, has also warned that voting against the treaty would dry up liquidity sources in the coming year.

As such, it is no wonder that many Irish voters feel bullied, and anger over the savings dictate by the troika of the International Monetary Fund (IMF), the European Commission and the European Central Bank (ECB) is running high. For the last four years they have seen repeated cutbacks as unemployment tripled and the economy stagnated. The troika has lowered their growth prognosis for 2012 to just 0.5 percent, while consulting agency Ernst and Young expects only 0.1 percent.

Economization efforts are clearly not working, Irish economist David McWilliams wrote in The Financial Times on Tuesday. But instead of spurring on demand, the government is allowing itself to be put into a "straitjacket" with the fiscal pact.

The level of discontent among the Irish people can be seen in the growing support for leftist party Sinn Fein. The anti-fiscal pact party has reached record support of 24 percent -- more than double their election outcome just a year ago. Party leader Adams is more popular than Prime Minister Kenny in polls.

Doubts About Germany and France

Still, fears of national bankruptcy trump outrage at those pushing austerity. The government's strategy of pointing out the threat of economic disaster seems to have been successful. No Irish citizen wants their country to once again become a plaything of the financial markets. Voting against the fiscal pact would heat up speculation over Ireland's future and that of the euro zone. Even the anti-treaty activists expect it to pass on Thursday.

If that happens, Ireland would be the fifth EU country to ratify the fiscal pact, which would come into effect on Jan. 1, 2013. But new doubts have been created in Ireland by the delay in ratifying the treaty in France and Germany. The former's new president François Hollande has advocated an additional growth pact before he will agree to the treaty. Meanwhile, German parliament, which was supposed to ratify the treaty in late May, will now address the issue after the next EU summit in June.

But why should the Irish, of all people, pass the treaty if it's not even finished, asked influential independent Irish parliamentarian Shane Ross in the Irish Independent on Sunday. He maintains that the threat that Ireland would be left out of the ESM is a bluff. "It is inconceivable that Greece would be saved and Ireland abandoned," he wrote, recommending that fellow citizens vote against the fiscal pact. The worst that could happen, he said, is that the country would have to vote on it a second time in autumn when a complete version will also include a growth pact.

Finance Minister Noonan thus remains wary. "We have had a long history of referenda in this country and they can swing at the end, so the government is by no means complacent," he said on Monday. 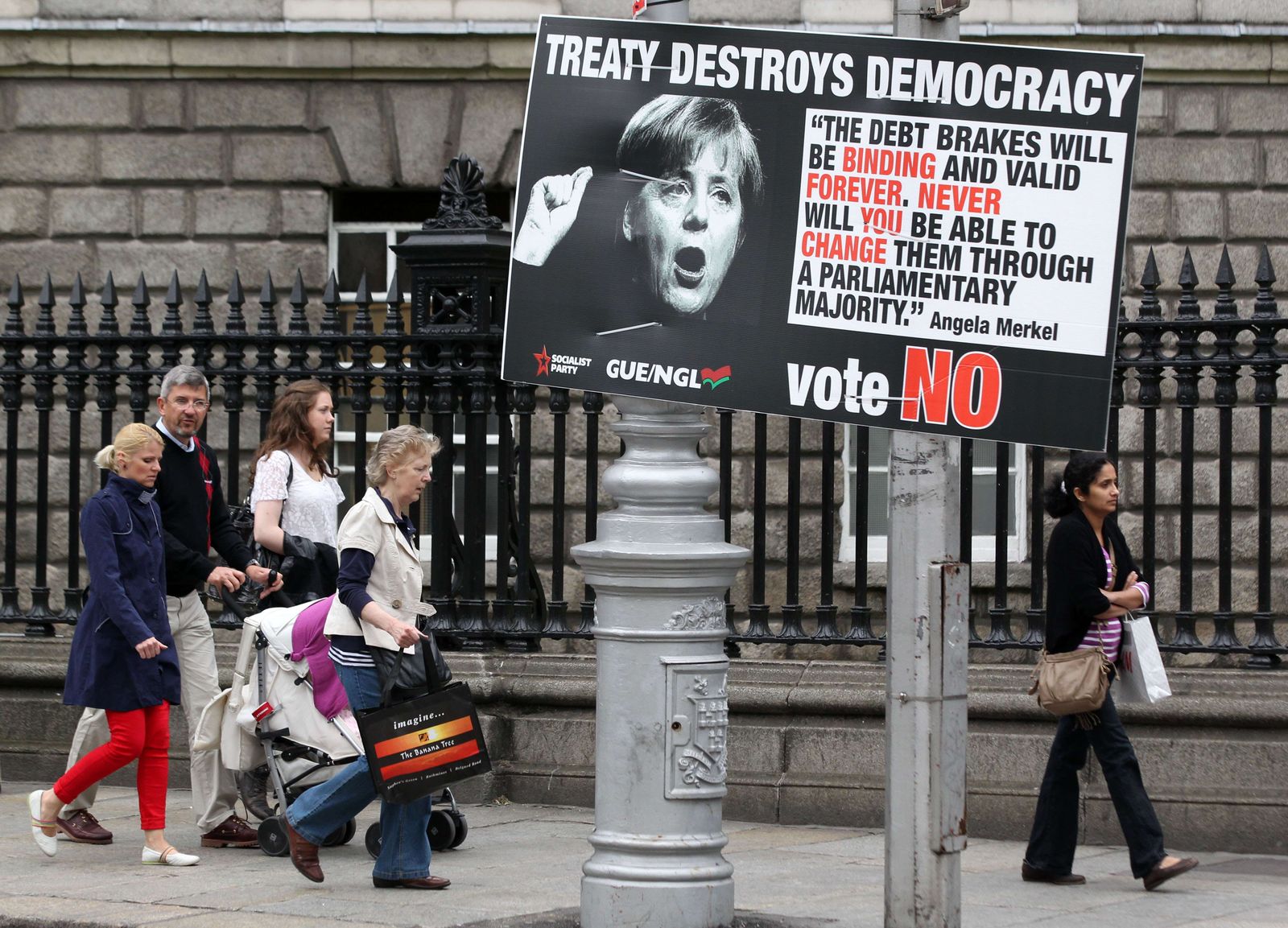