First Greece and then Portugal? That is what many skeptics of Europe's handling of the ongoing debt crisis have long been saying. And on Thursday evening in Brussels, they appear to have received high level confirmation.

In a video clip apparently made without his knowledge at the meeting of euro-zone finance ministers, German Finance Minister Wolfgang Schäuble told his Portuguese counterpart Vitor Gaspar that Berlin would be willing to make adjustments to the Portugal bailout package. It was the first time that a high level euro-zone official had admitted that such changes may become necessary.

"If then there would be a necessity for an adjustment of the Portugal (program), we would be ready to do that," Schäuble says in the video, which was posted on YouTube and on the website of the Portuguese television station tvi24. Gaspar responds: "That is much appreciated."

The comments were made on the sidelines of the Euro Group meeting called to discuss the planned second bailout package for Greece worth €130 billion ($172 billion). Schäuble made clear that the Portuguese aid package could only be revisited once a "substantial decision on Greece" is made and with the support of the German parliament.

The German Finance Ministry has declined comment. Gaspar told Portuguese reporters that Lisbon is not currently seeking an adjustment to the bailout package.

Many experts, however, believe that could soon change. The European Union passed a €78 billion bailout package for Portugal last May to help the country stay afloat until it could return to the international financial markets by the end of 2013. That deadline, though, has looked increasingly untenable in recent weeks as yields on 10-year Portuguese sovereign bonds exploded to over 17 percent in January before falling back to their current levels of around 13.5 percent. Anything over 7 percent is considered to be unsustainable in the long term.

Portugal has a better track record than Greece when it comes to implementing austerity measures and political reform, but the country's economy has been suffering mightily, having spent all of 2011 in recession. Portugal has already received over half of the bailout funds made available to it last spring.

Inspectors from the European Commission, the International Monetary Fund and the European Central Bank -- known as the troika -- are expected in Lisbon next Wednesday. Given recent labor market reforms and energy market liberalization -- both adjustments which have been pushed through parliament this year -- the ultimate troika report is likely to be solid.

Lisbon, however, will have to slash its budget deficit this year to 4.5 percent of gross domestic product. Last year, it was only able to meet its deficit of 5.9 percent of GDP by way of a €6 billion bookkeeping contrivance -- a one-off measure which the troika has asked Lisbon not to repeat. 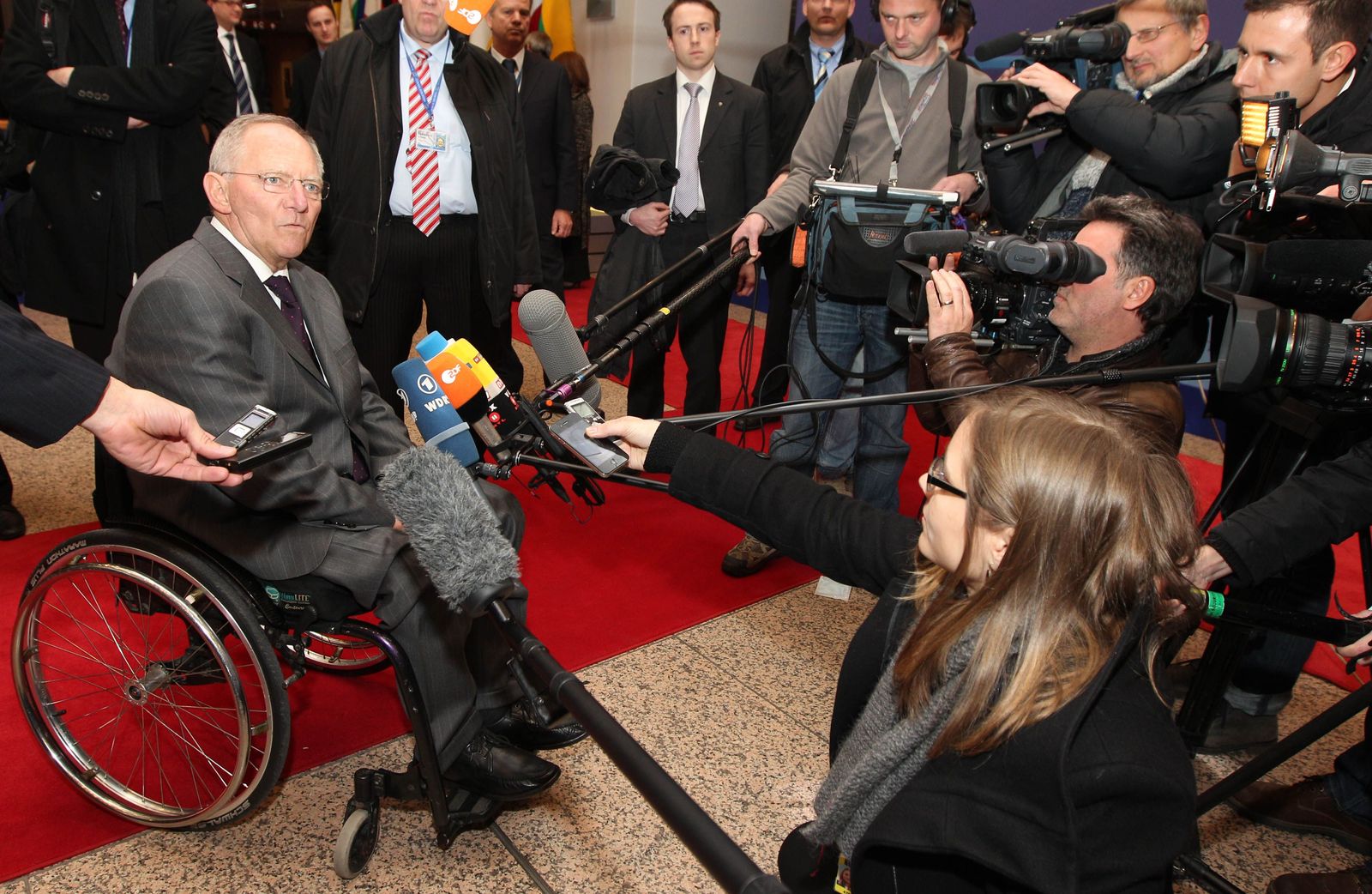 German Finance Minister Wolfgang Schäuble speaking to the press in Brussels on Thursday.