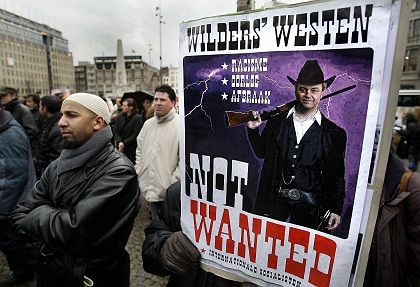 Protesters have opposed his film, but Geert Wilders says "Fitna" is a "last warning to the West."

Originally, he wanted to tell the Danes how much he admires them. "You are a strong people with a strong government," he told them in an appearance last week on Denmark's second-largest television channel, TV2. "Unlike my government, you haven't given in to militant Muslims!"

But the host had other plans for Geert Wilders. He asked the populist Dutch politician to take part in a psychological test, in which he would gauge his empathy on live TV. In one question, the host asked: "Did you decapitate insects as a child?" Wilders, with his reputation as a roughneck politician, was forced to offer a rare look behind his professional political façade. "No, never," he responded. "I was a nice, well-behaved child."

Do you dream much at night?, the host wanted to know. "When I sleep, I sleep," Wilders growled. And does it strike a chord in you when you see people crying?, the host asked. "Of course," Wilders purred. "And I've even been known to apologize when I've gone too far."

But then he reverted to the old Wilders, stubborn and unyielding. "When I am in the right," he snarled, "I push my point of view."

Wilders' hate-filled tirades and disrespectful statements have reverberated throughout the Netherlands for more than four years. His rhetoric is directed against the political establishment, leftist intellectuals and Eurocrats. But Wilders' chief criticism is reserved for Muslims at home and abroad. Even his opponents admire him for his determination.

They grudgingly admit that this man, with his wig-like, bleached-blonde hair, is currently setting the tone as the most rhetorically adept figure in the Dutch parliamentary business. Dutch journalists voted him politician of the year in 2007, and foreign reporters jostle for interviews with this supposedly unwavering man.

The 45-year-old Wilders' pushy behavior is exasperating to Dutch security officials and politicians alike. In the parliament, where he holds a seat with other members of his opposition group, the Partij voor de Vrijheid (PVV or Party for Freedom), he comes across as self-confident and defiant, dogmatic and unaffected. For months, various cabinet ministers, intelligence officials and police officers have urged him to abstain from his plan to release his film "Fitna" (Arabic for "strife"), in which he hopes to settle scores with what he calls the "fascist Koran."

But the more he comes under public pressure, the calmer the man seems to become, as he lounges in his purple chair in the Dutch parliament, twisting his stout, angular face into a mischievous grimace. He behaves with the infallibility of a missionary convinced that he has been chosen to disseminate his dark visions. "Fitna is the last warning to the West. We can choose to pass freedom on to our children or allow our freedom to sink into a multicultural swamp," he says forebodingly.

Wilders is depriving himself of a personal life with his obsessive hatred of Islam. His bodyguards move him to a different location every night. He sees his wife once every week or two. In his windowless office in the Dutch parliament building in The Hague, the Binnenhof, he smiles derisively as he shows films depicting his image, underscored with the rattle of machine guns and the snarling voice of a hate-mongering imam calling for his death.

He derives obvious enjoyment from forcing his political foes into a dilemma. On the one hand, the elite in the Netherlands despise him for his demagogic manner, with which he indiscriminately associates all Muslims with terrorism. But banning his film? That would violate the unassailable value of freedom of expression. This conflict has led the Green Party's leader in the Dutch parliament to grudgingly support the notion that the government should pay the cost of security for the public performance of his film.

He is only too pleased to watch intellectuals -- the people he routinely castigates as do-gooders and cultural relativists -- squirm. Nevertheless, his poll ratings are climbing. If the country were to hold elections next Sunday, his PVV, which currently holds nine seats in the Second Chamber, or lower house of parliament, would likely double its standing. His tirades against Moroccan adolescents jostling through pedestrian zones strike a chord with ordinary Dutch voters.

But political scientists also pay tribute to him occasionally, as they did a year ago when he pertly asked two newly sworn-in state ministers which state they actually served. Was it the Dutch state, he wanted to know, or the Turkish or Moroccan state, of which they were also citizens?

Everyone in the Netherlands has an opinion about Wilders, and yet little is known about him as a person. A recently published biography attempts to provide an initial impression of the origins of Wilders' rage against Islam. He was born in the city of Venlo, on the German border. He was a latecomer, and his mother spoiled him to no end. His father, the head of research at Océ, a manufacturer of copying machines, had hidden from the Nazis in World War II. Forty years later, he still refused to cross the bridges over the Meuse River to neighboring Germany. This strict devotion to principle seems to have made an impression on the young Geert. Referring to his military service, he says: "I too was happy not to have to share a tent with the Germans during joint maneuvers."

His goal after finishing school was to see the world. But he lacked the money to get to Australia, his preferred destination, so he went to Israel instead. Wilders, who speculates that some of his ancestors were Jewish, felt completely at home upon his arrival in Israel. "It felt like I had been there before," he says. He supported himself by working long hours in a bread factory, and he traveled extensively in the surrounding Arab countries. The Israelis, he felt, were not as pigheaded as the Arabs. "But when the Egyptians talked about Israel, you could see the hatred in their eyes."

He visited Muslim countries again and again. Even in the late 1990s, he flew to Iran, Syria and Jordan. To this day, he waxes poetic over these "magnificent countries," but then he adds: "It's a real shame that these places are so chaotic." Wilders is very familiar with the Arab world, the same world where he is now causing such a commotion. It is short-sighted to describe him as ignorant.

By the same token, he is not a dull racist and xenophobe, like his right-wing populist counterparts in France, Belgium and Germany. He wants to ban the Koran, the burka and the construction of new mosques. But he also wants to prevent "gays from being beaten up on our streets by Muslim youth." He is married to a Hungarian woman, a former diplomat who works for a multinational US corporation today.

The roots of his frustration with the political and social caste are much easier to uncover. Wilders became acquainted with the soft lap of the welfare state, complete with its proliferating system of subsidies and its corruption, when he worked for the Dutch social insurance agency. In 1990 he joined the People's Party for Freedom and Democracy (VVD), which purported to fight precisely that tangled social network. Frits Bolkestein, the party's charismatic leader, became his mentor and discovered Wilders' talent for writing speeches.

When Wilders entered the city council of Utrecht in 1996, where he represented the VVD, he lived in the city's Kanaleilanden neighborhood. As a resident, he had a firsthand view of the gradual demise of what had been a middle-class residential neighborhood. While the Muslim immigrants became radicalized in their faith, Wilders became equally radicalized in his conviction that Islam is backward and "will not be reformed in 1,000 years." People who know him remember that he used to complain about not feeling safe to walk in the streets of Kanaleilanden. Some conjecture that it was at that time that his rage against Islam was truly inflamed.

His anti-Islamic sentiments were exacerbated in November 2004, when a Muslim of Moroccan origin assassinated filmmaker Theo van Gogh in Amsterdam. Using a knife, the killer pinned a blood-spattered note to van Gogh's body, threatening the life of Somali-born Dutch politician Ayaan Hirsi Ali, an outspoken critic of Islam. The name Geert Wilders appeared in another letter that the police found in the killer's apartment.

Wilders has been accompanied by six bodyguards ever since. "They stand outside the door when I go to the bathroom," he once said. The irony of his situation, he says, is that the people who threaten him are more or less free to walk around on the street. "The people they threaten," he says, "are essentially living in a prison."

Wilders also does his utmost to prevent an early pardon. In February 2006, he posted the controversial Danish cartoons depicting the Prophet Mohammed on his website. This prompted visits and warnings from the Dutch domestic intelligence agency. Wilders responded in his own way, announcing his plan to shoot his own film about the Koran. It was a coolly calculated provocation, a propagandist trap for both government politicians and radical Muslims. It prompted Prime Minister Jan-Peter Balkenende to mobilize the police, intelligence agencies and even his colleagues within the European Union. Meanwhile, Islamists in Afghanistan and Pakistan were only too willing to set Dutch flags on fire, turning Wilders' prophecies into reality.

One organization did respond correctly: the Dutch Muslim Broadcasting Organization, which offered to air Wilders' film on its television network -- under the condition that Wilders would agree to take part in a discussion afterwards. But Wilders declined, just as he has turned down invitations to meet with Muslim organizations in the past. Apparently Geert Wilders isn't interested in looking his enemy directly in the eye.