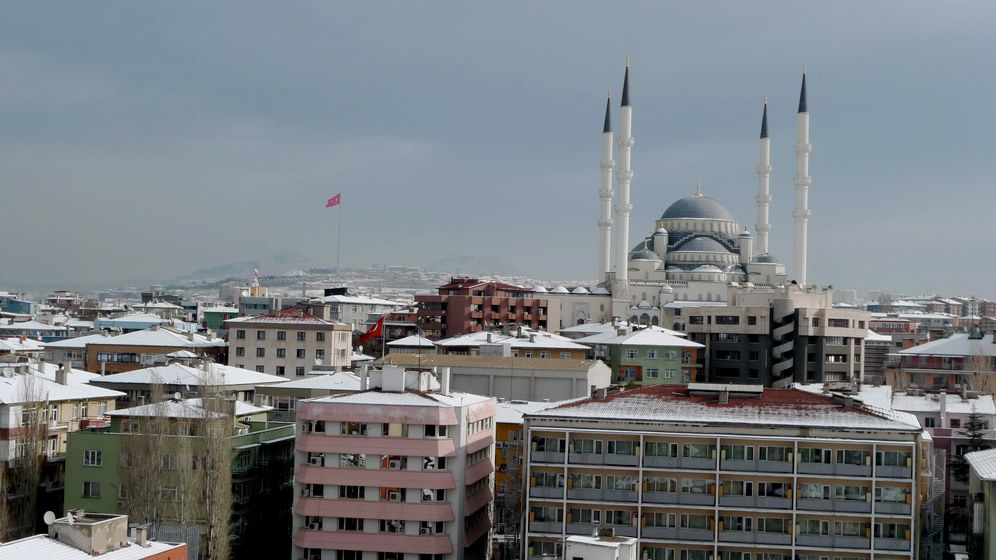 It was impossible to tell that the men who gathered in a German language class one frigid winter morning in Ankara, Turkey were Islamic religious leaders. They wore suits, or plaid button-up shirts, and could have easily passed for office workers or graduate students as they worked over phrases of German in their course book.

"Birgit Deichmann still searches," one man in a grey suit read aloud. He stroked his black mustache with a look of befuddlement. "What is a Deichmann?" he asked the instructor. Deichmann, she explained, was just a German last name, the name of the person still searching.

His question indicated the degree of culture shock that lay ahead. These men, who hail mostly from the villages and cities of Anatolia, would in the next several months depart for Germany to serve four years as imams, leaders of Muslim congregations in mosques throughout the country. From their classroom at the Goethe Institute in Ankara, where through the windows the students could behold the white and grey minarets of Ankara's Kocatepe Mosque soaring to such heights that the towers seemed to hang from the clear blue heavens, German society seemed like a distant notion. Most of the imams, in fact, had never visited Germany, much less held a conversation with anyone with a last name like Deichmann.

Germany lacks well-established Islamic theological programs that can educate German-born Islamic scholars, which means that Muslim congregations often have little choice but to import imams and religion teachers from abroad. But German policy-makers are increasingly considering whether religious leaders from Turkey or other nations are the best candidates to lead congregations in Germany, especially following a recommendation in February by the German Council of Science and Humanities, an advisory group to federal and state governments, which called for the prompt creation of two to three new Islamic theology programs within German public universities. The creation of such programs can be considered a progressive notion in a nation where even the construction of a neighborhood mosque with minarets can ignite fears over the increasing prevalence of Islam in Europe.

But for Germany, a country perpetually seeking antidotes to what many of its citizens see as the difficulty of integrating its manifold population of 4 million Muslims, comprised mostly of Germany's large Turkish minority, the idea of cultivating a distinctly German form of Islam that is rooted in German institutions, or at least mosque leaders with a native knowledge of the German language and the communities they serve, is increasingly seen as wise integration policy.

Within the Turkish Presidency of Religious Affairs, the state agency known as Diyanet that oversees the practice of Islam in Turkey and appoints imams to serve large segments of the Turkish Diaspora abroad, there is agreement that Germany could benefit from educating more home-grown imams in its own theological institutions. "But how can one do that now so long as the institutions in Germany or in Europe are not of the kind that exist in Islamic lands?" Ali Dere, who heads up foreign relations for Diyanet, said in his office in Ankara, where, on the wall, a portrait of Mustafa Atatürk, the founder of the Turkish republic, gazed down upon the room. "As a long-term goal, we wish that Europe somehow develops wholly strong and good institutions of Islamic theology." But, Dere added as a note of caution, it would take time to develop such programs since there is not exactly an abundant pool of German-speaking, university-trained Islamic theologians who could staff them.

Diyanet began sending imams to Germany in the mid-1980s, at a time when more fundamentalist Islamic movements that had been banned in Turkey had become increasingly popular among Turkish Muslims in Germany. In 1984, Diyanet founded The Turkish-Islamic Union of the Office for Religious Affairs in Germany (DITIB), now one of Germany's largest Islamic organizations, in a move that experts say was at least partly intended to counteract the influence of those movements. Today about 880 of Germany's estimated 2,500 mosques and Islamic associations affiliate themselves with DITIB, which maintains close ties to Turkey.

This class of 16 religious officials in Ankara -- including five women headed abroad as Koran teachers -- was near the end of a four-month course required by Diyanet. After school one day, many of the men from the class gathered in the common room of their dormitory, where during the course, they shared cramped rooms with as many as five single beds and barely enough floor space to lay down a prayer carpet. The men said they believed in a very tolerant strain of Islam, and indeed, they sounded almost idyllic when speaking of their faith. "Every Muslim loves everyone," said Murat Abdullah, a tall 39-year-old who towered above his classmates. "Not only human beings, but all God's creatures," added his colleague, Haluk Disci, a 29-year-old with a trimmed black beard.

'Our Job Is to Help them to not Forget their Roots'

But the Imams had a less idyllic conception of life for Muslims in Europe. As they gathered near the television, on which they mostly watched the news -- though occasionally also a popular game show called "Marriage," which pairs together new couples -- the Imams discussed increasing "Islamophobia" in Europe. Some debated the vote for a minaret ban in Switzerland and opposition to Turkey's membership in the European Union. Many said that they have heard of the so-called integration problems facing Germany's Turkish population, but the phenomenon still remained something of a mystery. "We cannot imagine what kind of problems the families are facing there," said Disci. "But on the other hand," he added later, "It doesn't matter where you go. We have the same job. To bring religion to the people."

Sitting nearby and sipping a cup of tea, Cüneyt Ayas, a 33-year-old who was born in Mainz, Germany and fondly remembered the early years of his childhood spent there before his family returned to Turkey, added to this thought. "Our job is to help them to not forget their roots," said Ayas of Turkish congregations in Germany. Of course, they should respect other lifestyles, he said, but they ought to "live a Turkish life."

Into the room entered Idris Lap, a 46-year-old who has already served a tour in Germany as an imam in Essen and Hagen. He was enrolled in a more advanced German class at the Goethe Institute in Ankara for religious officials who had worked as imams in Europe, and would now be returning for assignments as attachés overseeing imams. Lap and his classmates spoke of the difficulties of being an imam in Germany, where, they said, an imam is not just viewed as the man leading the prayers, but also as something of a social worker and moral advisor for an entire congregation.

Lap, a jovial man with a gray mustache, made himself a cup of tea and told tales about what it's like to be the Hodja, a Turkish honorific by which imams are often addressed. He often received phone calls in the middle of the night. "Hodja! I've had a fight with my wife!" a caller would say. An imam in Germany deals with several generations of Turks, Lap went on to explain, each with very different life experiences and outlooks. "With four-generations, you stay busy," he said with a laugh that indicated some amusement for what was in store for the young imams. "An imam works 25 hours a day."

A few of those headed to Germany for the first time were eager to understand some of the difficulties confronting the Turkish population there, and to help, even if they were not sure how. One day after class, one of the younger of the Europe-bound imams, Mehmet Ceviz, walked into the small library at the Goethe Institute, and asked the librarian if they had the film "In July" by Fatih Akin. Ceviz said he had recently discovered Akin, the acclaimed German-born film director and son of Turkish immigrants, whose films often depict the lives of Turks living in Germany.

Over a cup of hot chocolate in a nearby cafe, he talked about the characters in Akin's popular 2004 film "Head-On," about a suicidal young woman from Hamburg who married a drunkard solely to liberate herself from the control of her domineering father and brother. It was not the many indiscretions of the young woman in the film that concerned Ceviz as much as the lack of sympathy shown to her by her family. He said he especially wanted to help young people like the woman in the film, and wondered how he would deal with such a situation were he confronted with one like it in Germany. "If I could help their situation, it would bring great meaning to my life," he said. "But how will I help?" he added, shrugging as if he had given the matter careful consideration. "I don't know." 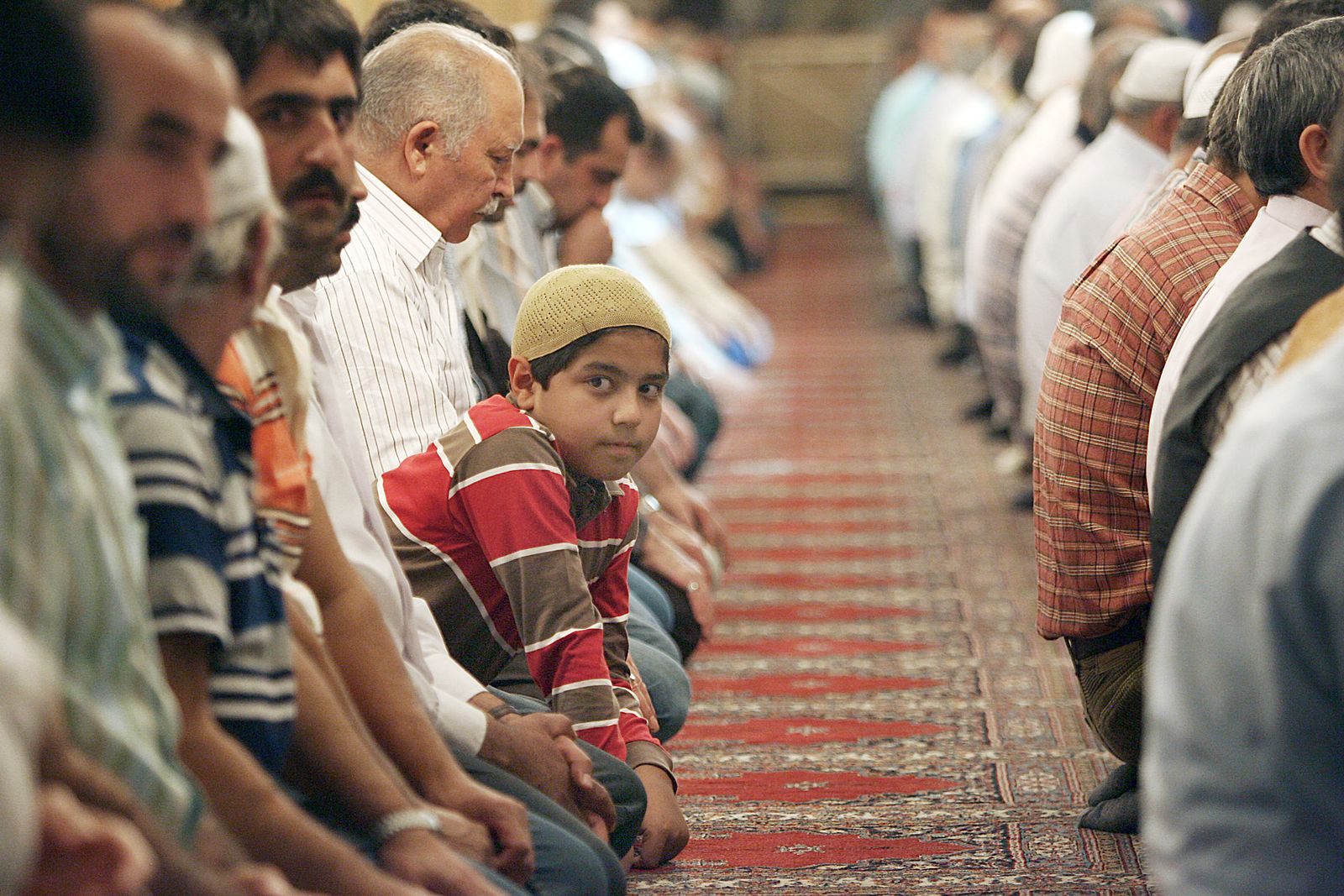 Prayer at a mosque in Cologne: Many advocates of creating Islamic theology programs in German universities believe that Imams born and educated in Germany would be better able to serve the needs of a younger generation of Muslims growing up in Germany.