For all of our knee-jerk sympathy for the protesters that have recently been gathering on Wall Street as well as in cities like Frankfurt and Barcelona, it would be interesting to know whether they're actually in favor of rescuing Greece or of booting it out of the euro zone. Likewise, are they fighting speculation and the power of the markets -- or simply capitalism as such?

So far, the signals have been ambivalent. The cluelessness of the elites has become the cluelessness of the street, and now average people are creating what might be called their own befuddlement. Given this situation, congratulations are in order for our completely overwhelmed politicians, who have managed to divert attention away from their own impotence by joining forces with the protesters against the easiest common enemy to target: the evil bankers!

Bashing banks has always been popular, though it has often, since the 19th century, come with anti-Semitic overtones. Even today, some crackpots are convinced that Goldman Sachs is part of some global Jewish conspiracy.

Banks are, of course, responsible for things like excessive bonuses, the bankruptcy of Lehman Brothers and financial instruments ranging from the murky to the devastating. But others have failed as well, including economists, journalists and, most of all, those politicians who, feigning understanding, are currently aligning themselves with the young protesters.

Economists have failed because they predicted neither the 2007 nor the 2011 crisis -- and because now they are talking each other to death in ideological trench warfare. We in the media must also admit to having failed because we've hardly been able to explain the crisis and because, now that a whiff of resistance is developing against "those at the top," we are looking forward to an anti-capitalist global revolution with greedy enthusiasm.

The Total Failure of the Political Class

Of course, other governments haven't been much better. Germany's current debt troubles really began to take shape under Helmut Schmidt, the Social Democratic chancellor of Germany from 1974 to 1982 who is now in great demand as someone who can supposedly interpret crises well. Greece simply deceived the rest of the euro zone with falsified financial data. And even before Lehman Brothers collapsed in the fall of 2008, 11 of the 15 countries that belonged to the euro zone then were not fulfilling the stability criteria of the Maastricht Treaty limiting gross government debt as a percentage of GDP.

Just Going Through the Motions

Today, the nations of the world have accumulated the almost unfathomable sum of more than $50 trillion (€36 trillion) in debt. And that figure even ignores other foreseeable burdens, such as old-age benefits and pension payments.

Almost all parliamentary democracies tend to greatly overdo it when handing out gifts to voters. The shouting only starts when, in the great circus of subsidies, a particularly frivolous clown routine is to be eliminated for cost-cutting reasons.

It's a political world chronically addicted to debt. And it's one that pats itself on the back whenever it merely succeeds in reducing the net amount of fresh borrowing -- in other words, diving just a bit less into the red. It's a political world that didn't have the courage to address the urgently pressing issue of regulating global financial markets even in the years when everything was still booming.

Likewise, it's also a political world that has been stumbling from one crisis summit to the next over the last four years, one that turns a blind eye, underestimates, appeases and delays. After European leaders met in Brussels, the European Financial Stability Facility (EFSF) was born. In addition to being virtually unpronounceable, it also stands for the elites' inability to at least drum up support among their own citizenry.

For the last four years, the members of this political world have portrayed themselves as being driven -- but by what? The evil markets, which simply want to know whether they will get their money back?

In the end, these markets -- and this is where we come full circle -- also represent those enraged citizens, the small investors now camped out in front of the European Central Bank (ECB) in Frankfurt, who don't even understand that this bank is the last fire brigade standing rather than the arsonist.

Perhaps those holding up banners saying "Down with interest and compound interest" are hoping -- like some politicians -- that the debts will somehow just disappear if they just keep their eyes closed long enough.

In 1992, when Bill Clinton was campaigning to become president of the United States, one of his best-known campaign slogans against George H.W. Bush read: "It's the economy, stupid!" Today, the slogan ought to read: "It's politics, stupid!" 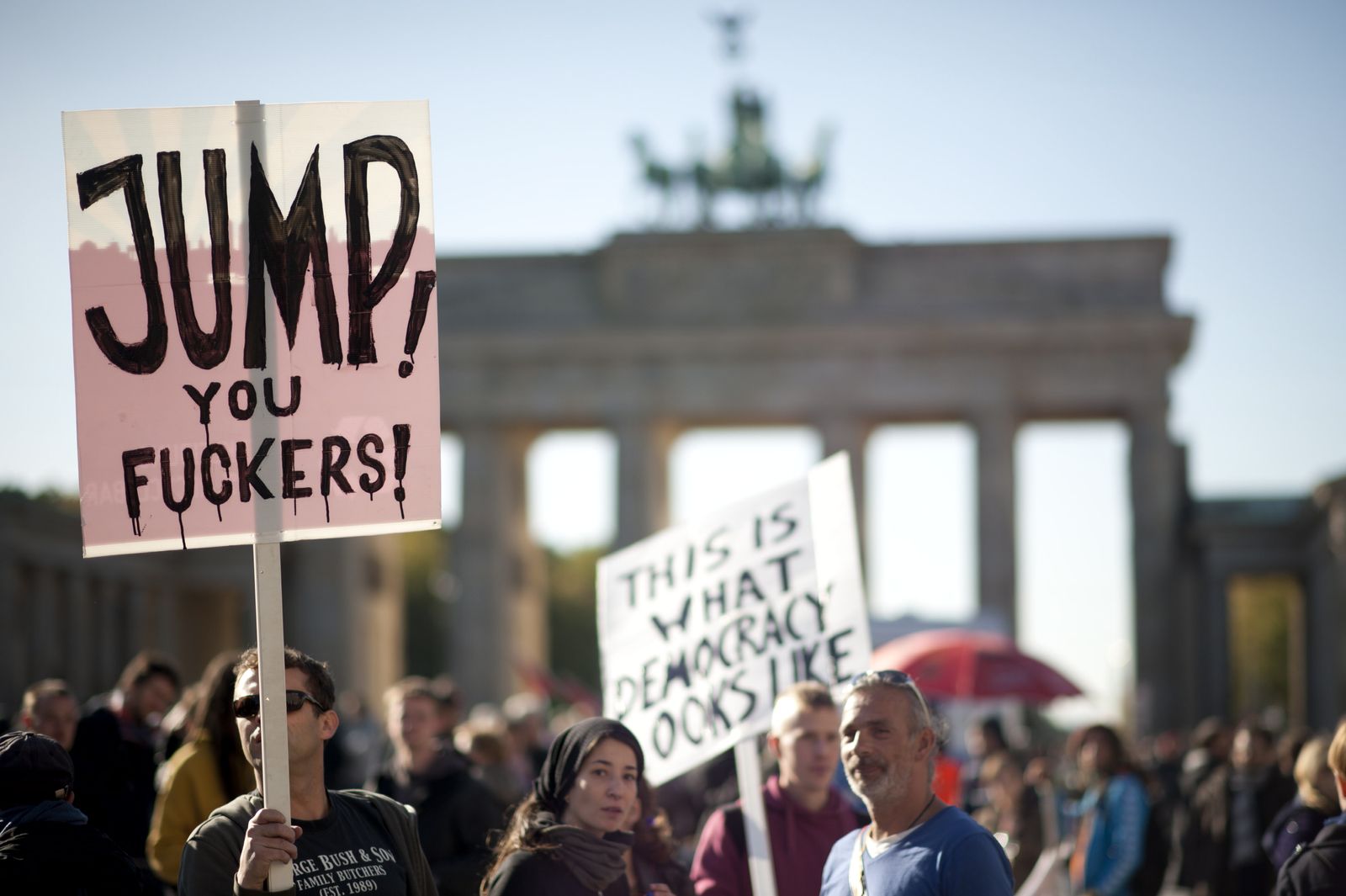 Demonstrators protest against banks in October in front of Berlin's Brandenburg Gate.