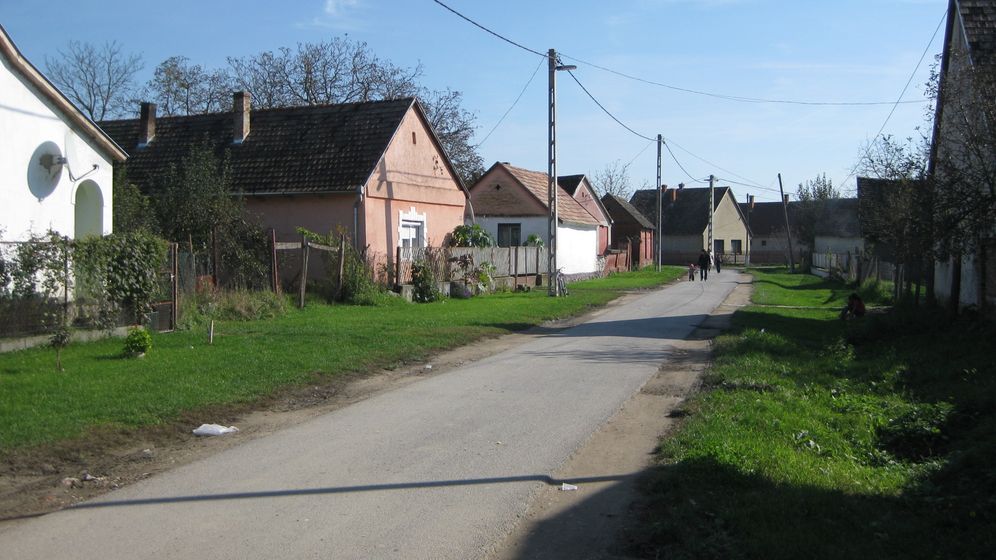 There are no shops, cafes or other small businesses in Alsószentmárton. One of the few things that stands out from the rows of one-story, shabby houses, is the imposing white church at the entrance to the village. Children play and cycle their bikes on the streets and young women, not much older, push strollers and call out greetings to one another.

Alsószentmárton is a small village in southwestern Hungary and all of its residents are Roma, Europe's most marginalized people. Living here on the very edge of the European Union, right up against the border with Croatia, the villagers are fighting the affects of decades of social exclusion and disadvantage. A project run by the local Catholic priest is attempting to tackle that poverty and to address one of the Roma population's biggest handicaps: the lack of access to a decent education.

Father József Lánko, a huge burly man with a white beard, wears a brown woolly jumper. The 55-year-old has been in the village for 30 years and has seen firsthand the ravages caused by the economic turmoil that followed the end of communism. "Earlier everyone had a job, the people in this village were in construction or road building," he explains. "They had a minimum salary, but it was certain that every month they would have money, so they lived in security." With the fall of the Iron Curtain, from one day to the next, they lost everything.

"The people live like beggars now," Lánko says. "It is against human dignity, it would be much better if they could take care of their own families by working."

Lánko says the unemployment here fluctuates. It is 90 percent most of the year, but drops to 60 percent during the wine harvest season -- the village is located near Hungary's famous Wine Road -- when the people are employed in the local vineyards. "There is little here in winter, the families have nothing to eat, then we help for a few days, give them something so they don't have to starve," he says.

With financial backing from Renovabis, a German charity which funds projects in Eastern Europe, the church now provides the village's poorest people with donated clothes and daily hot meals. The village's 1,200 residents are Boyash, a distinct group of Roma, whose language is an archaic form of Romanian. For most, Hungarian isn't their mother tongue. Lánko and other church workers also help bridge the language barrier by assisting when it comes to filling out forms or dealing with banks and state organizations.

As Roma they are members of Europe's largest minority group, thought to number between 10 and 12 million. Most Roma live in Central and Eastern Europe, and many of them live in extreme poverty. Hungary, home to some 700,000 Roma, says it wants to tackle the Roma issue during its six-month EU presidency. But Budapest, never mind Brussels, couldn't seem any farther away in this isolated place.

Alsószentmárton is surrounded by flat fields as far as the eye can see, but the villagers don't own the land. It used to be a mixed village, but then the non-Roma population began to abandon farming in the 1960s and 1970s and moved away to work in factories and industry. Although the Roma managed to buy homes cheaply, they couldn't afford the surrounding land. Now, even if they wanted to move away they couldn't sell their houses.

Lánko says relations with the wider non-Roma community can be fraught with problems. "When they need unskilled laborers, then the relationship is very good, they are cheap labor," he says. "But in winter when the gypsies are freezing, and they go out and get some wood, they don't ask who owns it. And then there is trouble."

He says that Alsószentmárton is plagued by the usual social problems that accompany poverty, including alchoholism. And the people here also suffer from a terrible kind of exploitation in which other Roma charge them huge interest payments on loans in a predatory manner.

"We cannot really protect the people. No one can protect me from myself," the priest argues. He does, though, try to help people apply for normal bank loans so they can escape the punitive payments to loan sharks.

The people here may live in relative isolation, some 230 kilometers (142 miles) away from Budapest, but they are still aware of the increase in violence against the Roma there, including a series of murders in 2008 and 2009 and the marches by the now-banned Hungarian Guard. Nor can they miss the prevalance of hate-filled anti-Roma rhetoric in Hungary, particularly from the far-right Jobbik party. Lánko is scathing about the claims by members of Jobbik, now the third biggest party in parliament, that the Roma are work-shy, and have many children simply to get access to generous welfare support payments.

"That is rubbish," he fumes. "They would like to work here, if there was work. And it is also rubbish that a family can live on child allowance. Please try -- those people from Jobbik should try living on child allowance, or on the small amount of social welfare. It's impossible."

While jobs are few and far between, Alsószentmárton is trying to at least give the children a head start and help them escape the vicious cycle of social disadvantage and reliance on welfare by ensuring they get a decent education. There are two daycare centers in the village, one state-run and one operated by the church, and an after-school club where teaching assistants help the children with their homework and organize activities for them.

Access to a proper education in Hungary can be extremely difficult for the Roma. Completion rates are particularly low, with only around 50 percent of Roma children even finishing an elementary school education. And the latest figures from the Roma Education Fund, based in Budapest, show that only about 5 percent go on to study at universities.

One of the biggest problems in Hungarian education is segregation, either through separate classes within schools or by Roma children being siphoned off into special-needs schools for kids with mental disabilities, often on their very first day of school. It is a form of discrimination that perpetuates the exclusion and poverty of Roma communities.

Kushen's organization has already successfully brought the issue of school segregation by the government of the Czech Republic to the European Court of Human Rights. The ERRC is also now monitoring the situation in Hungary, where it is estimated that one in five Romani children is incorrectly tracked in this way.

Ágnes Jovánovics is one of those few who managed to get an education. A Roma from the village herself, she is now the director of the church-run preschool. The 44-year-old had left school early like nearly everyone else in Alsószentmárton and trained to be a sales assistant. While working in the city, she decided to go back to school at night and get her high school diploma.

Lánko, the village priest, suggested she train to become a preschool teacher so that she could work in the new daycare center he was setting up. She now supervises nine kindergarten teachers, three of whom are not Roma. Lánko chuckles: "People are shocked that a Roma is the boss there. A Roma telling non-Roma what to do!"

For Jovánovics the most important challenge when preparing the children for school -- there are currently 81 at the center -- is to make sure they can speak Hungarian properly. However, the center operates in both Hungarian and the Roma's native Boyash language.

Lánko says it very important to maintain close contact with the children's families. He says the Roma "cannot live without family. They live in very close proximity to one another ... often with several generations in one house."

There are no schools in the village so children have to take the bus to a nearby town of Siklós to go to elementary school. Some also attend secondary school there, while others go to boarding schools elsewhere, including the renowned Roma-run Ghandi school in the town of Pecs about 40 kilometers away. Church social workers in the village check in to make sure the children have left for school in the morning. The project helps pay for the trip to school and food for the children whose families have no money.

Proud of her Roma Roots

Everyone in the after-school club knows Jovánovics. Children with their faces painted run up to greet her and tell her about their activities. On this day, about 30 children have been divided into groups to tell each other about the different continents, with members identified by different colored scarves. They then take turns putting on performances. Outside in the yard, 17-year-old Tomás is stirring a giant pot, cooking up a stew of potatoes and paprika. He is training to be a cook and says he would like to work as one in the village some day.

Jovánovics says the children all want to learn. "They have to, otherwise they have no prospects," she says.

It is not always easy, however, to persuade the Roma that education is something to which to aspire. She says that when she first decided to study, it was very difficult for the other people in the village, including her own mother, to comprehend why she, a Roma and "a woman of all things," would want to get an education. But Jovánovics told her mother it was something she wanted to do and she finally came around, saying: "If you want to, then do it."

Jovánovics motivation also helped inspire others in the village to follow in her footsteps. Her son is studying Italian at a university, and another young woman is completing a degree in education and hopes to become a teacher.

Jovánovics is proud of her Roma roots and says that being educated won't change that. "In gypsy families there are good traditions," she says, adding that she doesn't want to abandon what she earned from her parents. "Otherwise who am I? Regardless of how much I study, I am a gypsy."