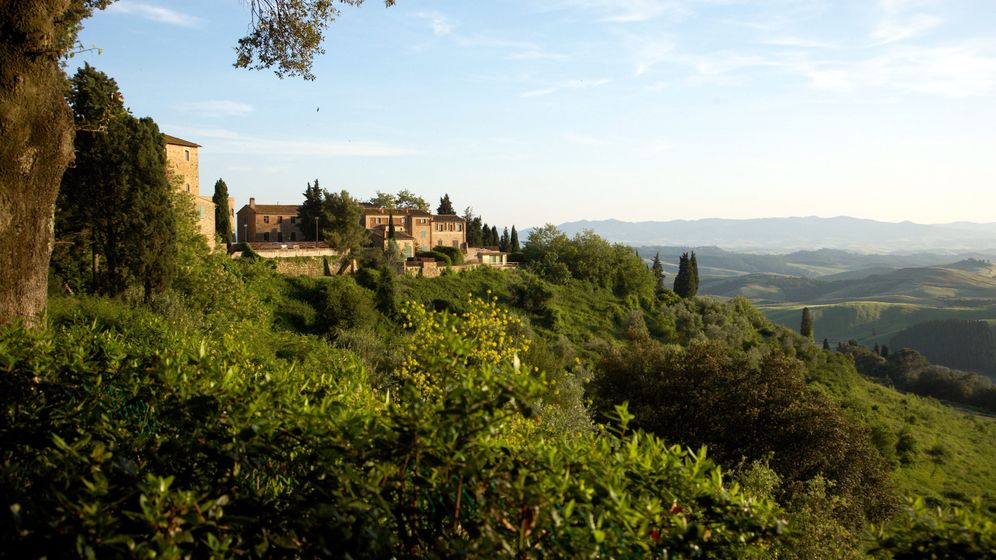 When God created the earth, it wasn't a terribly difficult task. Granted, he was under some pressure to get it done on time, but it was a deadline of his own making. After all, no one had stipulated that he had only six days to complete the project. In return, he had the seventh day to plant the seed for all kinds of social nonsense that persists to this day: driving prohibitions on Sundays, holiday surcharges and strict store hours.

God also did not have to contend with the challenges modern real estate developers face. Convoluted concepts like land use plan modification applications and toxic waste cleanup requirements weren't invented until much later. And although Mr. Schlüter really doesn't want to start with Adam and Eve, the task he faces is vastly more difficult: what could very well be the largest project ever launched to develop an earthly paradise.

Schlüter, who works for TUI, manages 11 square kilometers of prime Tuscan countryside between Florence and Pisa. "It's almost six times as big as Monaco," says Schlüter, which sounds a lot better than "at least half the size of Berlin's Marzahn district," although that too would be perfectly correct. Size alone is not the issue, but rather a dream of beauty, luxury and authenticity, or, as the brochure states philosophically: "a simple life done to the highest standards." Peace, joy and spa living.

Schlüter is sitting on the terrace of the golf-course restaurant, the only building completed to date. Green lizards dart across the tiles, and the lasagna is almost as warm as the midday sun.

A guest surreptitiously steps on a large spider, which Schlüter would probably have rescued. He has just devoted a sizeable chunk of the conversation to describing how sustainably his staff will protect this unique cultural landscape, which extends well beyond the 18-hole golf course -- also an authentic Tuscan creation.

He already has the bloodsucking horseflies under control. They weren't going over well with the golfers. Now the offensive insects are swimming in a brown liquid inside extremely green-looking traps hanging from trees on the edge of a slumbering forest. The resort has its own lake, and even a little village on a hill, not to mention 8,000 olive trees, which are already being used to produce olive oil once again, or the 400 wild boars that have to be kept locked up to prevent them from soiling the greens. Even eco-fun has its limits.

The godforsaken village is called Castelfalfi, but now that Schlüter has arrived, it goes by the name Toscana Resort Castelfalfi. Schlüter has obtained building permits for two new hotels with a total of 320 rooms, as well as about 160 new apartments, villas and townhouses -- which sound better than row houses.

A third, existing hotel is currently being gutted. The first pizzeria is under construction along the village street. Most of the 28 Casali (the original, now decaying hovels on the property) will be renovated, as will 50 apartments up in the village. All the old walls must be preserved.

When Schlüter's legions of construction workers, engineers, architects, craftsmen, designers and gardeners complete the project in the spring of 2013, this piece of Tuscany will look like…Tuscany. The only difference is that it will be a state-of-the-art resort with all the necessary accoutrements, including a security service, high-speed wireless Internet, pools and concierge service. The first visible evidence of construction which can now be seen -- drainage pipes, water pipes and cable harnesses -- will quickly be buried.

Schlüter finally has free rein to press ahead with the project. It's already been six years since he discovered the sleeping beauty of Castelfalfi. If the village were a woman, she might be said to have had a checkered past. Things have been going downhill for this diva since the end of World War II. Residents died or moved away. The farms became dilapidated. Italian investors came and went, had plans and buried them again. Castelfalfi became a sleepy village once again, until TUI bought the property in May 2007.

Prices were high at the time. Soon afterwards, the economic crisis erupted, and for various reasons nothing was happening in Castelfalfi once again, except that Schlüter brought his family to live there with him. He felt that he had to remain on site to familiarize himself with the Italian mentality, which is how his own tale of creation began.

There simply weren't enough interested parties with money to spend. TUI was suffering as a result of the economic crisis, and at home in gloomy Germany it was forced to bail out its container ship subsidiary Hapag Lloyd. And in Castelfalfi Paola Rossetti, the striking, leftist mayor of the town of Montaione, to which Castelfalfi belongs, was making things difficult.

Rossetti, whose father was also once mayor of the town, likes to talk about all the concessions she wrested from the Germans. Groups of angry citizens were causing trouble at the Teatro del Popolo. The guests from the north aren't exactly popular in Castelfalfi, particularly since it isn't their first time here.

During the Second World War, German soldiers shot Tuscan partisans, which didn't exactly improve German-Italian relations. Then came Germany's student riots of the late 1960s. When the investors finally materialized, the locals wanted to first show them what their money couldn't buy.

The seasons came and went. Schlüter discussed and appeased, explained and persuaded. There were hearings and PowerPoint presentations and meetings in Montaione, Florence, Rome and wherever else there were people were involved in the decision-making process.

Schlüter is like a tree, but more of an oak than a cypress. Nowadays, he can shout at his construction workers in halfway decent Italian. But even such an energetic and dynamic person needs a healthy dose of unshakable faith, lest his goal of creating a paradise become hell on earth when progress is hindered.

He is all too familiar with luxury resort dreams. Years ago he supervised the development of the Fleesensee vacation resort in the Mecklenburg-Western Pomeranian lake district for TUI. The most important difference between that project and the Italian venture is that Tuscany already has a reputation, and a very good one at that. And not just among Germany's limousine liberals, who probably can't even afford Castelfalfi. Gerhard Schröder, perhaps, or Otto Schily.

Meanwhile, none of the celebrities of the local Tuscany faction has put in an appearance, even though they fit into the target age group, which is no longer entirely relevant in terms of advertising: successful men starting in their mid-50s, with grown children and a second or third wife looking for a prestigious second or third home. Modern people with conservative values, which could include the owner of a chain of southern German butcher shops or the head of a Düsseldorf advertising agency -- just not too many of them.

If there is one thing TUI fears, it is that its future luxury village will become a Germanic haven of sorts, complete with Italian-style sausage and sauerkraut. First, this would only deter other nations, and second, the Germans who could afford Castelfalfi wouldn't want it anyway.

What they want is originality and international standards all in one, and the chance to chat with their neighbors in English over a non-existent garden fence, while someone named Pietro prunes the hedges and palm trees.

The German upper class is not alone in its yearning for such a global village. The first Russian potential buyer Schlüter remembers was mainly interested in knowing whether other Russians had already bought property in Castelfalfi. He was relieved to hear that the answer was no. But there is an even greater threat than the Moscow nouveau riche.

When Marco Boldrini of the environmental organization Lega Ambiente gazes at the golf course in Castelfalfi, he says: "We gave TUI too much freedom." But at least Germans and Italians have been interacting long enough that they understand each other. Boldrini still prefers the German picket-fence fetishists over the Chinese. He fears that within a few years they'll be buying up other Italian villages and copying what they see in Castelfalfi.

In fact, could this be the future of tourism? Instead of buying a club or a beach, a developer simply goes out and buys an entire strip of countryside. Right now an Egyptian has plans to transform the sleepy Swiss town of Andermatt into a giant resort, but faces massive local opposition.

Meanwhile, Schlüter's dream is something of a platinum card-carrying, multicultural society, which could look something like this: 25 percent Germans, 25 percent Britons, 25 percent Italians and the final quarter consisting of Swiss, French and Scandinavians. The one thing they would all have in common is a certain net worth. The executives at TUI believe that this mix of people would form an entirely new type of village community.

It would certainly be interesting to watch the London stock market speculator, the Swiss heir of millions, the Russian oligarch with his entourage of young female companions and the Swabian businessman gather for a glass of wine on the village plaza in the evening. The original inhabitants of Castelfalfi won't be getting in their way. In fact, only one still lives on the property.

But Schlüter's paradise urgently needs real Italians. The bartender in the castle has to be a Giuseppe. And perhaps Schlüter can drum up a few weather-beaten craftsmen in the surrounding region to play at life -- any life -- in Castelfalfi's little shops.

A few of the original inhabitants get together on Sundays in the small park at the castle, including people like kiosk owner Paolo Leoncini, who was born in Castelfalfi but has been living in Montaione for some time. Then they sit in the shade of ancient trees and reminisce about how their little village was free of aristocracy and landowners.

Although TUI's initial designs felt "like a punch in the face of Tuscany," says Leoncini, he also concedes that tourism is part of the region's future. Now the issue is jobs, and Schlüter is promising 250 full-time positions.

At any rate, there is still plenty potential trouble in Schlüter's paradise. It could end up looking like assisted living for millionaires. It could attract the wrong buyers. Even worse, it might not attract enough buyers at all.

"I'm not worried," says Schlüter, as the sun sets. "The entire project is fully financed. If the markets were to collapse again tomorrow, it might take a little longer. But we will finish this project."

Schlüter is now 51. He will stay for as long as his company in faraway Hannover lets him. He has been playing God in Castelfalfi on behalf of TUI for the last six years. It could take another six years to finish what he has started. And perhaps he would finally be able to rest in the seventh year.

But Schlüter says he would probably prefer to spend his retirement in Germany, anyway. It may have less sun and Carrara marble, there is also something paradisiacal about the safety net of an eminently reliable healthcare system.