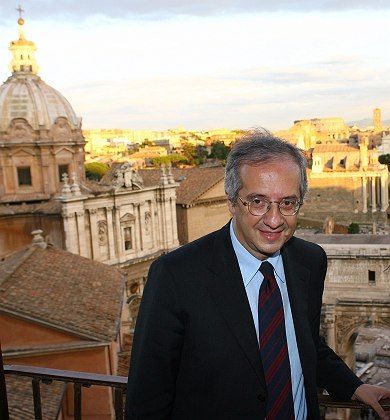 Rome's Mayor Walter Veltroni likes to show his guests the ruins of the Forum Romanum from the balcony of his office in the Senatorial Palace. A long list of illustrious visitors have admired the view of the field of ancient rubble, including Hollywood stars like Tom Cruise, and politicians such as Chile's President Michelle Bachelet who dropped by recently. The Capitoline Hill is where politics were invented. It was here that Rome's senators perfected the fine art of shaping realistic policies and reaching compromises -- and choosing the right moment for betraying friends and ideas.

Last Tuesday Veltroni gazed at the ruins and gave his visitors the usual introduction to Roman history, and if the 52-year-old happened to mention Brutus and his murder of Caesar then that was pure coincidence. Nonetheless, it looks as if he could soon find himself playing the role of political assassin.

Since Oct. 14, only one man has stood between Veltroni and political power: Romano Prodi, his longtime political friend and ally. On that momentous day, two and a half million Italians voted for Veltroni, making him the head of the newly established Democratic Party (PD). This marked a political first: Never before in European history had ordinary citizens, regardless of their political persuasion, voted in a secret ballot to select the head of a new political party.

The new Democratic Party was born of a merger of the socialist Democrats of the Left (DS) and the progressive Christian Democrats of the Margherita party. "This is our solution for the antipolitica," says Veltroni, referring to widespread disenchantment with the country's doddering political system.

This coming Saturday delegates are to meet in Milan for the first party conference. The new party is the third new political entity in Italy in just a few months, coming on the heels of comedian Beppe Grillo's populist V-Day movement ("V" stands for a rude Italian expletive) and the political clubs, known as "Freedom Circles," set up by businesswoman Michela Vittoria Brambilla.

"Finally," says Veltroni, Italy has a "reformist party to counteract all the conservatism" in the country. He says that his party is open to entrepreneurs and unemployed youth, Christians and atheists, socialists and liberals alike. The new party head even says that he is considering foregoing party membership cards.

Even more unusual than the way it was created is the fact that this supposedly new political force has already been in government for some time. Margherita and the Democrats of the Left are the two biggest parties in Prodi's ruling coalition, and Prodi has been appointed for the largely figurehead role of party chairman in Veltroni's PD.

This places Rome's popular mayor in a tricky dilemma. He would like to remain loyal, but not at the expense of his own political ambitions. If he grandstands at Prodi's expense, it will weaken the current government. However, if Veltroni gives too much support to Prodi, it could tarnish his own image as the homo novus.

Veltroni's political role models include John F. Kennedy, Nicolas Sarkozy and Tony Blair. He wants the PD to be modern, social and reformist, in the image of Britain's New Labour, and to be capable of winning a majority. Nevertheless, at his keynote speech in Turin when he formally announced his candidature he mixed in messages of unpopular belt-tightening with his upbeat vision of a "new Italy." Veltroni said that security was neither a right-wing nor a left-wing concept, but a civil right. And while he spoke of a "pact between the generations" he insisted that the social system should not discriminate against first-time employees in favor of pensioners.

It's easy to believe this man when he says that he was never a communist, despite the fact that he was responsible for propaganda and agitation in the Italian Communist Party for many years. While editor-in-chief of the party newspaper "L'Unità," he included the New Testament as a supplement. During his tenure as the minister of culture in Prodi's first government, he acted like a glamorous cosmopolitan. And as the mayor of Rome, he brought an international film festival to the city, tamed (to some degree) city traffic, and wrote novels to boot. Veltroni says it was in Rome that he discovered the joys of concrete achievements.

Clearly, his time has come. Prodi's government has been drifting like a ghost ship, steadily losing popularity and at the mercy of every political storm that shakes the Senate, where it only has a wafer-thin majority. The longer Veltroni waits, the greater the danger that he will sink with that ship.

Last week, Prodi and Veltroni's staff were busy playing down the dilemma. Veltroni pledged his loyalty "until the end of the prime minister's term." Prodi said: "The government is working and will ride the wave of support for the PD."

But in reality things are far from rosy for the government. Last Friday there were media leaks that Prodi is assuming there will be new elections in January: "Berlusconi has done it." The 71-year-old former Prime Minister Silvio Berlusconi has reportedly succeeded in winning over "at least seven senators" to the opposition, including former Prime Minister Lamberto Dini. This would be enough to erase Prodi's wafer-thin majority of one in the Senate, causing him to lose the budget vote at the end of the year. The government's vulnerability was in evidence this week when Justice Minister Clemente Mastella, a member of the small conservative Udeur party, threatened to resign if the cabinet did not support him in an embezzlement case.

New elections would be a tidy solution. Opinion polls still point to a "Veltroni advantage" over Berlusconi's center-right "House of Freedoms" political alliance. One recent survey showed that the Democratic Party could garner significantly more votes than the two entities that formed it. However, Italian politicians will first have to pass a new electoral law to prevent political parties from fragmenting into miniscule groups and pave the way for clear majorities in parliament. And even the opposition cannot agree on a position with regard to new legislation. Italian politics resembles the Forum Romanum -- a field of rubble but fascinating to look at.