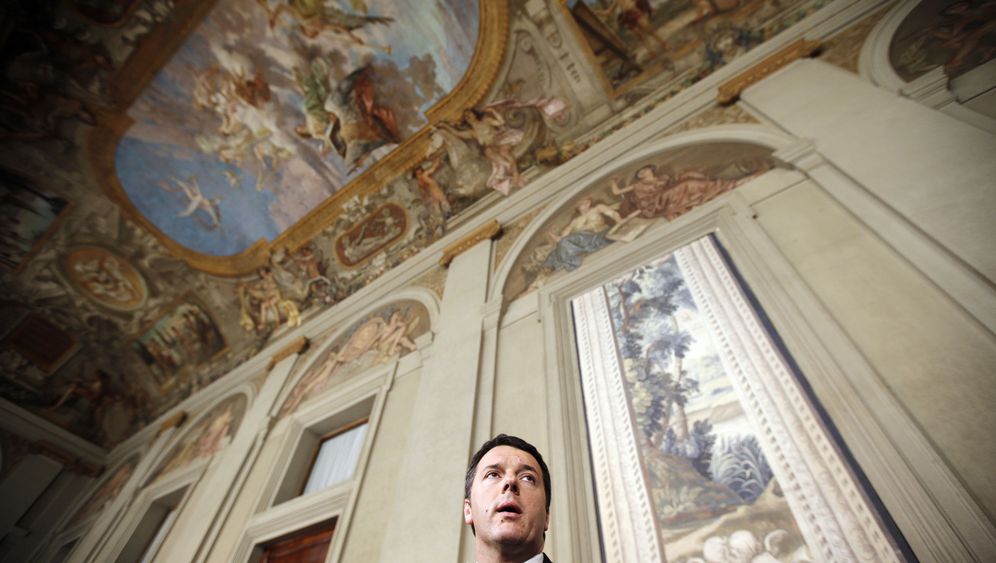 The dessert, following the seafood consommé and stuffed rabbit, comes in the form of a nice story from Matteo Renzi's early political career.

Fabio Picchi, a celebrity chef in Florence, tells it. It has to do with a former deputy mayor of the city who met the ambitious, young Catholic politician Renzi in the 1990s. He encouraged him, kept an eye on his development and, ultimately, came to marvel at him. Ultimately, he is said to have prophesied: "If this guy doesn't end up in jail, he'll become either the pope or the prime minister of Italy."

And that, the chef says, is exactly what happened. Picchi has cooked for Matteo Renzi for years -- as he has for Bill Clinton, Tony Blair and Gerhard Schröder during their visits to Florence. And now, the restless young Italian politician, who likes almost everything except mashed potatoes, is Italy's prime minister. State television spent several hours on a recent Wednesday broadcasting live from the parliament in Rome. The focus was on Renzi, who had been the Florentine mayor -- and Picchi's regular -- up until that point. It was his first appearance as head of government in Italy's representative body and he came across as self-confident and forceful -- as on the previous day when he told senators at a vote of confidence that representatives like them are no longer of any use in this "rusted, bogged down, chained up" country.

"To ask Italy's senators to vote for their own removal, that requires a real bravery," says Picchi. Others, however, especially those who live beyond Florence, are asking themselves: Are courage, chutzpah and obvious pride at having governed the city of Machiavelli and Dante for five years enough for the task that lies before him?

Renzi, 39, now tasked with leading the EU's third-largest economy, has never held political office outside Florence. The parliament and senate in Rome are foreign to him, not to mention the European Union bodies in Brussels. In the past, if he mixed up the Council of Europe with the Council of the European Union, almost nobody noticed. But now Renzi is being watched -- as the prime minister of a country in the midst of its most severe economic crisis since World War II.

Italy has now suffered through more than two consecutive years of recession. Sovereign debt stands at 133 percent of annual GDP -- among EU member states, only Greece has more. Rome is even €70 billion in debt to companies in Italy. Furthermore, business owners are complaining about the crushing tax burden and the country's unemployment rate has doubled since 2007.

Flag-Bearer of a New Political Class

Italy's parliamentarians, who earn net salaries of up to €12,000 per month, know the needs of their citizens. But they don't share them. Renzi, therefore, has become the people's council. Speaking over the heads of the lawmakers, aiming directly at the TV cameras, he says, "Italy can become a leader in the world, as long as there is a political class that doesn't just watch events like they're happening on a screen in a movie theater."

He sees himself as the flag-bearer of the new political class: modest lifestyle, down-to-earth, always on duty. Two weekends ago, between the swearing-in ceremony conducted by President Giorgio Napolitano and a phone call with Angela Merkel, he raced home to Pontassieve near Florence, to see his wife and three kids. Voters learned at just the right moment that Renzi and his wife Agnese, a teacher, have long earned less combined than an average lawmaker in Rome. Italians were also made aware that the three Renzi kids wore green, white and red -- the color of the Italian tricolor -- on the day of their father's swearing-in ceremony. And that Italy's new prime minister went to mass at his home church shortly thereafter, where the priest read the gospel of Matteo (Matthew), specifically the passage about turning the other cheek.

A bit of advice from the pulpit? Renzi hasn't been the kind of man to humbly take a back seat, he'd rather dish it out. Like when, after his election to head the social-democratic Partito Democratico in December, he attacked his party colleague Enrico Letta for failing in his duties as a prime minister and, ultimately, pushed Letta from his pedestal. It seemed an application to the pantheon of regicides.

Florence knows best what Rome and the rest of Europe can expect from Renzi. Renzi has both strong proponents and impassioned critics in the Renaissance city. They can, however, agree on a few things: Renzi is an exceptionally gifted communicator, industrious, and a type-A personality. Whether as leader of boy-scout troops, as party secretary, as the 29-year-old president of the province of Florence or as a 34-year-old mayor, Renzi has always been number one.

Whoever gets in his way had better watch out. When one tenacious reporter snuck into the VIP zone of the AC Florence Stadium, Renzi stepped pointedly and silently on his foot. His recall of unflattering newspaper articles is legendary. That his strictly rationed digital sound-bites are happily consumed in Italy makes his life easier.

Renzi has no shortage of high-profile supporters. The most famous of them can be found not far from Florence's city hall, with their stores clustered around the cathedral: Interpreters of the Italian lifestyle such as fashion designers Ferruccio Ferragamo and Roberto Cavalli, shoemaker Diego della Valle of Tod's and the gourmet chain owner Oscar Farinetti of Eataly. Ferragamo says Renzi has done a lot for Florence, but says his most important accomplishment is that he "gave Florentines their self-confidence back and brought life back into the city."

All of them, multimillionaires and billionaires, are now banking on Renzi -- a man who just one year ago badly lost an internal party vote to the ex-Communist Pier Luigi Bersani. That says a lot about the grim state of Italy's political landscape -- and about the devastation left behind by 20 years of Silvio Berlusconi. Mostly, though, it speaks to the desperation felt by the country's most successful people. The state of Italian education and training is now so terrible that, according to the richer circles of Florence, "it has become difficult to find qualified employees."

Now that he's arrived in his country's highest position, Renzi -- who admits to having started by "junking" old elites -- needs to show what he can accomplish. He'll have his first opportunity on March 17, when he plans to meet with Chancellor Angela Merkel. Ten days later, a meeting with US President Barack Obama in Rome is on his schedule. Both will give him the opportunity to outline his plans for Italy's economic and moral turnaround. They are, everyone agrees, ambitious.

Even before Italy's European Council presidency begins on July 1, 2014, Renzi intends to launch one large project per month: a new electoral law to go along with reform to the job market, public administration and the tax system. "In three months, three things that we've been waiting for for 30 years? Well then, good luck!" wrote the daily Corriere della Sera mockingly. Renzi, the paper went on, may have missed the fact that the Italian bog he described isn't only "populated by herons and flamingos, but by toads, vipers and crocodiles as well."

In other words: Not only Silvio Berlusconi and Beppe Grillo, the leaders of the two strongest opposition parties, could get in the way of Renzi's coalition with its thin majority. There are also problems within his own party, particularly when it comes to defending benefits and areas of influence that lawmakers have become used to. And then there's the question as to how all of the increasingly Mao Zedong-sounding ("let a hundred flowers bloom and a hundred schools of thought contend") ideas that Renzi tweets ("One thousand construction sites for one thousand schools") are to be implemented and financed.

For the time being, Renzi is still happy that his views -- "Europe's stability is important. The stability of our children's classrooms is more important" -- have caught on among party members and voters. Renzi's success, just like that of Berlusconi and Grillo, follows a common thread, says conservative parliamentarian Achille Totaro from Florence: "The Italians want to be entertained and for that reason will unfortunately vote 70 percent of the time for politicians that almost nobody would vote for in Germany."

That Matteo Renzo is still considered someone who is more flash than substance is one way of looking at him. On the other hand, he has won all of the important elections he has stood in essentially by himself, against the will of his party seniors.

'A Special Penchant for Regicide'

David Allegranti, a reporter with Corriere Fiorentino in Florence and author of the first Renzi biography, explains it like this: "Matteo is able to turn an elephant graveyard into a glittering circus; he concentrates on central projects that are easy to sell. And he's power-conscious in the Machiavellian sense, a postmodern 'Prince,' so to speak, with a special penchant for regicide."

Those wishing to understand Renzi's fractured relationship with many Florentine intellectuals, Allegranti explains, must only take note of Renzi's most notorious statement: "This city doesn't need a mayor, it needs a marketing expert."

But for today's Italy, a country crippled by intrigues and conflicts of interest, someone like him is perhaps perfectly suited to be prime minister, says Allegranti. "In Rome he's like a Martian, like someone who comes from a different planet, from Florence, who is not senile and paralyzed, but young and quick."

Renzi could indeed manage to wake his country from its slumber, exactly because he is seen as a man of the people, has strong ties to the youth, and his willingness to face up to problems that are much bigger than himself, as caricaturist Sergio Staino puts it. Renzi's "mixture of congenial appearances and superficiality, of sensitive antennae and incomplete knowledge" doesn't necessarily mean he will fail, Staino says.

Renzi critics are in the minority in Florence, but they cannot be dismissed. They include residents who accuse the former mayor of having tried to turn the city into a kind of "Matteolandia," a global trademark, for the sake of his own glory.

The former city councilor for bookkeeping, Claudio Fantoni, now once again primarily employed as a baritone in a theater, criticized Renzi in a letter for having allotted much more time for his Facebook updates than he did for serious discussions of the city's budget.

That Renzi has little interest in conforming to the constraints of the Italian stability pact, or "stupidity pact" as he calls it, can hardly be denied: The Italian court of auditors has found "repeated irregularities" in the financial conduct of the city of Florence. The municipality's debt load jumped significantly within just a single year and in 2012 was over three-quarters of a billion euros.

Hardly surprising then that newly installed Prime Minister Renzi said that he was prepared to violate the European Commission's 3 percent deficit rule in order to implement his planned reforms.

In late February, former cabinet minister Fabrizio Barca, a member of Renzi's party, was surprised by a prank caller asking him if he would take the helm of Italy's Economics Ministry. Barca unexpectedly went on the attack, saying that he couldn't take all of the slogans and hype surrounding the new government anymore. "There isn't any plan behind it," he fumed, "just a surfeit of adventurism."

Come on, says Renzi's favorite Florentine cook and confidante Fabio Picchi, you have to be a bit more laid back about everything. First and foremost, Picchi says of his buddy Matteo, "he loves neither money nor power, he's just dying to be in control. In that sense, he has remained a boy scout his whole life."

And, in contrast to "la Merkel," says Picchi, his friend Matteo will step down in eight years at the latest. Renzi's priest, after all, taught him humility at a young age. He once told Renzi: "There is a God, and it's not you. So relax."