DER SPIEGEL: Mr. Foreign Minister, Italy has been particularly hard-hit by the coronavirus. Your government is calling for support from its partners in the European Union, including Germany. Is Europe now experiencing an ordeal similar to the one it faced during the euro crisis?

Di Maio: We have never experienced a situation like the one today. There is simply no historical comparison to the huge health and economic consequences of the pandemic. We will not find a solution if we just look back. It does not matter today how the Marshall Plan once worked, what German debts were forgiven after the war or the role Greece played in the euro crisis.

Di Maio: The future of the European people is now at stake. We are facing a global challenge. Europe must measure itself against the United States and China. No one should expect to be able to trigger an economic upswing as an individual state after the crisis.

DER SPIEGEL: Italy and other southern European member states want new borrowing to be communitized in the form of EU bonds, which have been rebranded as corona bonds. But countries like Germany and the Netherlands oppose them. They fear they could become a bottomless pit.

Di Maio: Italy has always paid its debts. Furthermore: Last year, we even reduced our deficit to 1.9 percent of gross domestic product - although we had previously agreed on a margin of over 2 percent with the European Commission.

Luigi Di Maio has served as Italy’s foreign minister since September. Prior to that he served as deputy prime minister in Giuseppe Conte’s first government. In Rome, 33-year old Di Maio, a member of the populist Five Star Movement, is considered a pragmatic politician.

DER SPIEGEL: Why do we need corona bonds then?

Di Maio: I am not interested in what we call the instruments for combating crises. The aim is to find the best instrument and respond to this severe crisis together. We need the EU’s full power and European state guarantees to secure the future of Europe.

DER SPIEGEL: Portuguese Prime Minister António Costa has described the attitude of rich EU countries like the Netherlands as "repugnant." Is he right?

Di Maio: What we need right now is not a battle of words, but cohesion. We're talking about the next 10 to 15 years. We just experienced the euro crisis in 2010 – and now the corona debacle. No other generation in Europe has had to overcome two crises this big in such a short time. We can only do this with the utmost earnestness and strength.

Di Maio: At the moment, we first have to make sure that our companies remain liquid, that we can secure jobs and that wages are guaranteed. On this front, we are also taking a close look at the German model. And then we have to strengthen our health-care system in the coming years.

DER SPIEGEL: What’s the current situation in the medical sector?

Di Maio: We are relying on the strength of our doctors, nurses and health-care workers. They are working 24 hours a day to save the lives of the sick. I would also like to take this opportunity to thank Germany for accepting Italian patients. It is nobody’s fault that we are having to deal with a pandemic and that we have over 14,500 dead. Italy is now expecting a collective response to this pain, which affects everyone, as the situation is also difficult in Germany, France and Spain.

"We cannot forget the great success we have had with the European single market in the past, with open borders and freedom of movement. This must not be lost."

DER SPIEGEL: What have you done to alleviate the economic consequences of the pandemic?

Di Maio: In March alone, we provided 25 billion euros. If, as the International Monetary Fund has calculated, we in Europe are losing around 5 percent of gross domestic product for each month of the lockdown, we will have to invest much more.

DER SPIEGEL: How much?

Di Maio: We have to bear in mind that the U.S., as the EU's economic competitor, is providing $2 trillion. China is also mobilizing huge sums of money. The companies in those countries could even emerge from the crises stronger than they were before. We need to find an appropriate response to this in Europe.

DER SPIEGEL: Ultimately, then, you are arguing that we need corona bonds of enormous dimensions?

Di Maio: We need to find the best possible arrangement. And I am not saying this for the benefit of Italy, but for Europe. If one of us falls, we all fall. Europe is currently experiencing its zero hour. You either win together or you lose together. The EU needs to act now -- and not react to things unprepared once again.

DER SPIEGEL: A current poll showed that 72 percent of Italians are disappointed by the EU response to the pandemic so far.

Di Maio: These are momentary snapshots. Italians are Europeans and feel a sense of belonging to the European people. I only hope that the EU will meet the expectations of the people and find solutions to the crisis.

DER SPIEGEL: Your country is a net contributor to the EU, meaning it pays more into the budget than it gets back. Klaus Regling, the chairman of the European Stability Mechanism, has already proposed changing that. Would that help?

Di Maio: Of course, we can talk about the next EU budget. Or about reforms to the European Union, we can easily imagine such a thing. But in these days, we first of all need to quickly find the right measures and instruments for dealing with the present. We must ensure that the member states can spend as much as necessary to help their people.

DER SPIEGEL: Will the European Union break apart if its members do not come together now?

Di Maio: The financial markets see a strong Europe when it speaks with a single voice.

DER SPIEGEL: Lega party boss Matteo Salvini has resumed stirring up sentiment against the EU. Does that worry you?

Di Maio: Salvini is really the smallest problem at the moment. The issue now is not anti-European campaigns – it’s about European responses. If we find them, those who want to destroy Europe will not stand a chance.

DER SPIEGEL: Russia and China helped Italy early on. Is it possible that your country is turning away from Europe and toward other partners?

Di Maio: China helped us a lot, especially in the beginning, when it sent us doctors and, most importantly, made the export of protective masks and ventilators possible. But many other countries have also provided us with support in addition to the Russians – Albania, Cuba and Poland, for example. France provided protective equipment, Germany has taken in Italian patients, as I mentioned, and U.S. President Donald Trump wants to support us with $100 million. Italy has always been a bridge between East and West, but our home has always been in the European and Atlantic alliance.

DER SPIEGEL: How is the coronavirus changing international politics?

"China helped us a lot, especially in the beginning."

Di Maio: I do not believe that the geostrategic balance is shifting. I am more concerned about the impact the pandemic is having on the global economy. We cannot forget the great success we have had with the European single market in the past, with open borders and freedom of movement. This must not be lost. I cannot predict how the world will develop after corona. But perhaps we will learn from this crisis as a global community that it is not just economic freedoms that are important,  but also the social welfare state and health-care systems.

DER SPIEGEL: When and how will your country return to normality?

Di Maio: It would be irresponsible to plan concrete steps for loosening (the lockdown) as long as there are no corresponding signals from the scientists who advise us.

DER SPIEGEL: Do you think you are over the worst yet?

Di Maio: We'll see. The scientists tell us that we have reached the peak. But we haven't got past it yet. 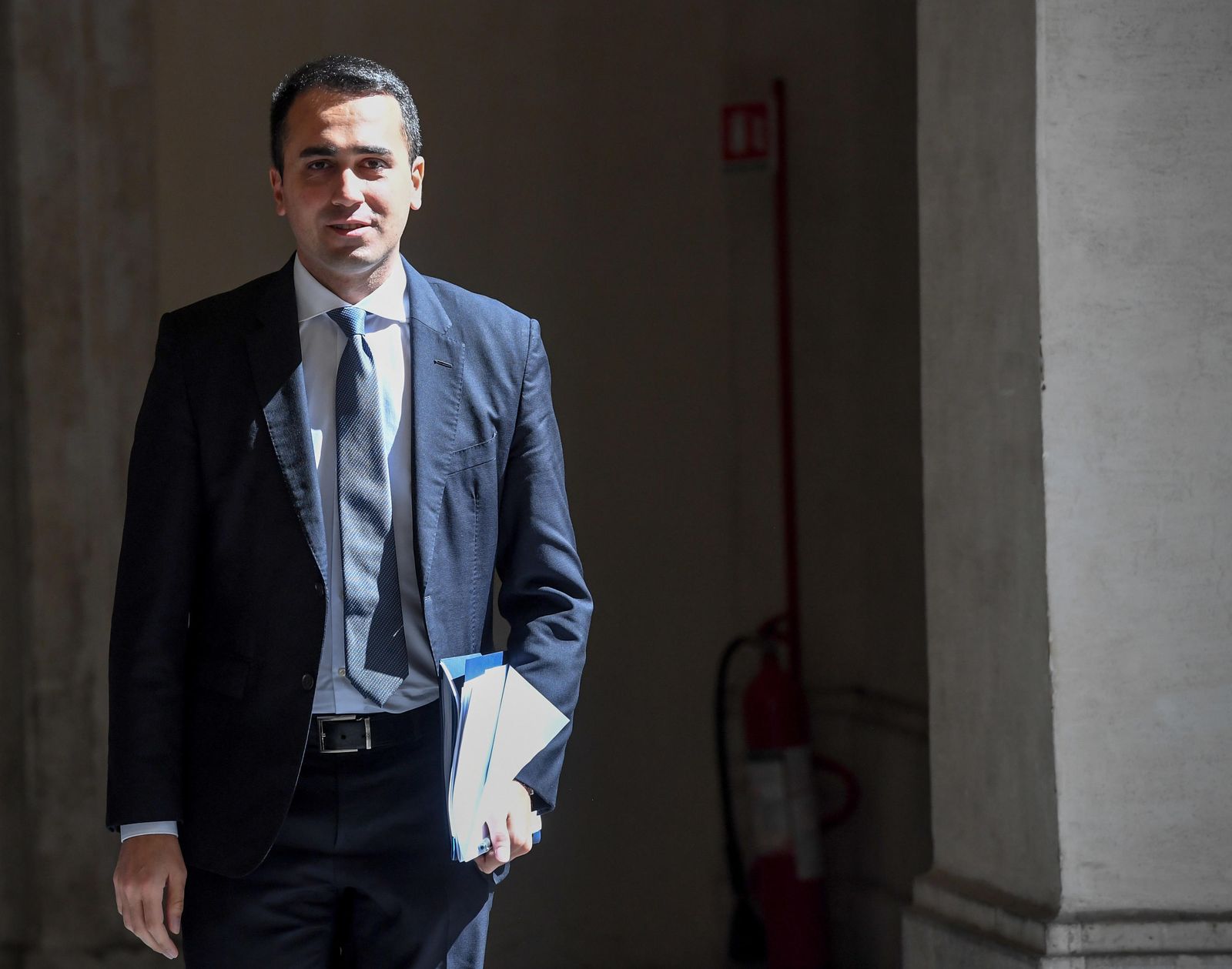 Italian Foreign Minister Luigi Di Maio: "If one of us falls, we will all fall."