The cornerstone for the political integration of Europe was laid just over 60 year ago in Rome. Today, though, Rome is the source of political risk that has the potential to inflict lasting damage on the European project, even more so than Brexit. The danger emanating from the current, out-of-control situation doesn't just come from the possible return of the euro crisis and its far-reaching consequences for growth and prosperity. It also comes from the new,toxic atmosphere of distrust among European peoples and nations. Many Italians believe the true source of the crisis facing their country is to be found in Germany and in "Teutonic austerity." Many Germans, meanwhile, view Italy and the Italian debt trap as themost pressing threat to the euro and to European economic stability. Such aren't particularly helpful when it comes to meeting the challenges that are now coming into view.

At 2.3 trillion euros, Italy has the largest debt load of any country in the entire European Union, and it is paired with the lowest rate of economic growth. Every third Italian under the age of 25 is unemployed. Banks in the country are struggling under the weight of a huge number of bad loans. In contrast to other eurozone countries that have experienced crisis, Italy never experienced an economic boom in the initial years of the currency union. Per-capita income has stagnated for 20 years. And yet Italy has still managed to adhere to strict EU deficit rules in recent years. From the Italian perspective, however, the benefits of doing so have been nonexistent. Against that background, the implosion of the country's political system can hardly come as a surprise.

Germany will not be able to isolate itself from the problems in Italy. If the crisis devolves further, a critical question will have to be asked: What is Germany prepared to do to keep Italy in the currency union? The explosiveness of this question is hard to overestimate. And unfortunately, it is already clear that there is no simple answer.

Italy needs more growth to be able to pay down its mountain of debt, and it also needs more social equality, especially between the rich north and the struggling south. The question as to how to achieve those goals, however, is a controversial one - both in Italy and in Europe at large. Would it be better for the country to leave the eurozone? Would it be helpful to abandon austerity, or is an even more ambitious savings program needed? Should the country restructure its debt? Should its debts be covered in a debt redemption fund? Even among economists, there is no consensus on these questions. Calling it helplessness would not be inaccurate.

One thing is certain: Every single one of these measures would likely initially lead to an additional crisis - either political or financial, either in Italy or in the rest of Europe. That is why any rushed decision on Italy is both naïve and dangerous.

Most options, viewed soberly, aren't really options at all. Italy's departure from the eurozone would plunge Europe into an even deeper crisis than the one we recently left behind. A debt haircut like the one applied to Greece would eliminate around a trillion euros in a single blow with uncontrollable consequences for the European banking and insurance system - and thus for the prosperity and social security of the people of Europe. A vast bailout package for the Italian economy, one which would also have to prop up Italian banks, is likewise unrealistic. Europe is simply unable to afford a bailout for the world's eighth largest economy.

And Mario Draghi? Could the European Central Bank stabilize the eurozone with a new whatever-it-takes approach? I believe doing so would be dangerous. It is not the central bank's job to solve political crises. And from a German perspective, it would be cynical to continue relying on the ECB given the intensity of the criticism that came from Germany when the ECB went to the limits of its mandate to save the euro.

Italy is too big to fail. But Italy is also too big to be saved. That is why comparisons with Greece aren't helpful. To help Italy, it is necessary to invent a new form of assistance. What is needed is a clear political strategy to ensure progress toward economic stability in Italy while ensuring that necessary reforms take place. Growth needs to lay the foundation for the modernization of the economy - through reforms which the government must be willing to then push through.

Unfortunately, the currency union has no instruments available to prudently implement such a step-by-step procedure. Repeated calls from others and myself that the euro must finally be shored up against possible crisis were primarily issued because it has long been clear that the Italian problem would appear sooner or later. In January 2017, four months prior to his election to the presidency, Emmanuel Macron said in his speech in Berlin that the euro wouldn't survive the next crisis if fundamental changes to Economic and Monetary Union weren't made soon. I believe Macron was thinking of Italy when he uttered that sentence.

There is still time to reform the euro area. But it must be done quickly, and it requires a strong political will. We must prevent a situation in which markets are able to speculate during a crisis against the euro and the principle of irrevocability enshrined in the treaty that established the common currency. The debate should not naively focus on the idea of a "transfer union," in which richer eurozone countries prop up poorer member states, and which is often used as a strawman argument against all kind of eurozone reforms (most recently in the form of an open letter signed by 154 leading German economists in the influential Frankfurter Allgemeine Zeitung newspaper). Instead, eurozone reform should be a combination of elements that combine market discipline with the introduction of more risk sharing. Earlier this year, I was part of a group of 14 French and German economists that formulated proposals in this direction.

Germany should stand up to the Italian challenge with a clear, twofold message: Italy must face up to its individual responsibility, but it can also expect solidarity from Berlin. A fundamental principle of the eurozone is that every member state must service its own sovereign debt. That is why the no-bailout clause is a central element of the currency union and one that should not be called into question. The euro does not imply automatic joint liability for banks either. Bank owners and bondholders should be liable for risks held by a their bank. Deposits must be insured on a country-by-country basis. All countries must take these responsibilities seriously and ensure that they can guarantee their own stability by limiting their exposure to risk.

But everyone knows that situations can arise when countries need external support. For such cases, the eurozone needs a re-insurance system that relies on a strong safety net in cases of emergency. The backstop of the European banking union is such a last line of defense. Investors will no longer speculate against countries, against banks or against the euro if they know that community solidarity is able to withstand an emergency. Currently, however, there are doubts about precisely that solidarity.

Once investors are convinced that the solidarity mechanism is solid, then they will cease betting against the survival of the euro. This will then open new possibilities in euro-area crisis management. Europe should sign a growth pact with Italy which combines badly needed structural reforms with investments. Such a dual-track approach could boost prosperity and open up a credible path to paying down debt.

But the question as to whether such a pact could be successful leads back to the question of widespread distrust in Europe. Do countries like Germany still believe in Italy? And does Italy still believe in European solidarity? The Italian electorate answered the second question with a clear "no" in the March 4 parliamentary elections. And now that the parliamentary majority in Rome is in favor of jettisoning austerity, the options available to Italian policymakers are clear: Either maintain austerity in opposition to the political majority, with the consequence of a deepening of the political crisis in Italy and an even greater distrust of Europe. Or spend even more money, as a majority of the population seems to prefer - with the consequence of increasing panic on the markets that could ultimately push Italy out of the euro.

Sooner or later, Italy's membership in the eurozone would be at stake under both scenarios. From the German perspective, one can either take a cynical approach to that dilemma, by relying on market pressure and the ultimate submission of the Italian population. Or one could take a constructive tack by establishing a new basis for trust.

The destructive potential of the storm currently brewing in Italy is considerable. Germany and Europe are not prepared, neither structurally nor institutionally. Every path toward a solution of the Italian challenge will be complicated, making it vulnerable to populist attacks across the Continent. But if the fear of populism prevents Europe from searching for the right solutions, then the collapse of the eurozone will be unavoidable. 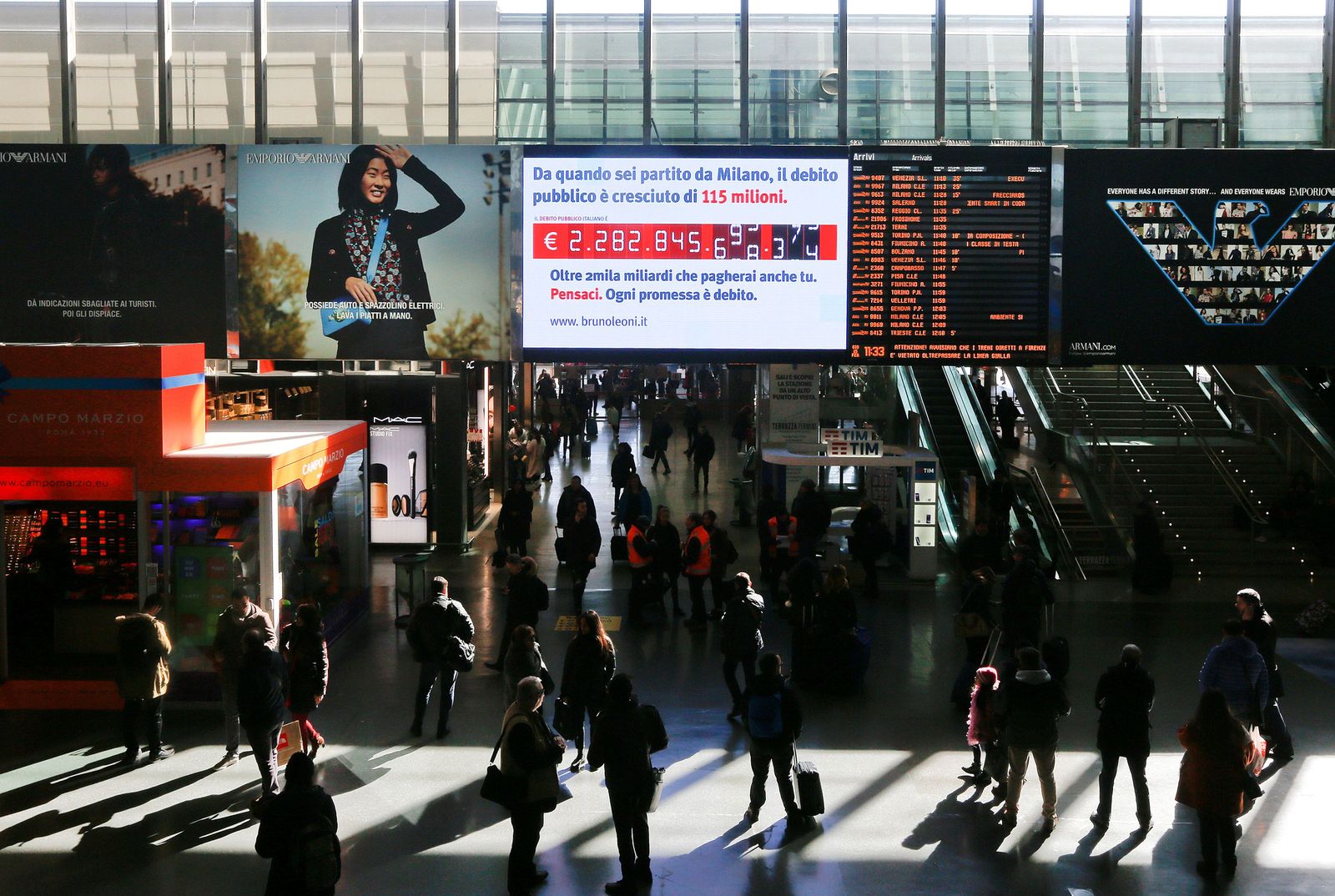