They look like images from an Armageddon dystopia, but they were taken in a regional hospital in the northern Italian town of Cremona. They show doctors wearing full protective suits, goggles, facemasks and clear plastic face shields as they tend to patients lying half-naked on their beds, attached to artificial respiratory devices. The doctors and nurses working in the clinic’s intensive care unit "are running out of strength and are incredibly tired,” clinic coordinator Carla Maestrini told the Italian broadcaster La7. "We have so many patients.”

Massimo Galli, chief physician for infectious diseases at Luigi Sacco Hospital in Milan says that the infectious diseases unit at the hospital has been cleared, as have two sections of the surgical ward, in order to handle just the most acute cases of COVID-19. Hospital personnel are working 12 to 14 hours a day, he says, and they are suffering from a shortage of virologists, internists and pulmonologists, all of which are badly needed in a catastrophic situation of the kind the country is currently experiencing. "Those who think the coronavirus is being exaggerated should come for a visit,” he says.

"Those who think the coronavirus is being exaggerated should come for a visit."

Cremona is located in the Lombardy region of Italy, just 28 kilometers from Codogno, the town where the first coronavirus case was diagnosed in the region and which remains the epicenter of the rapidly spreading viral epidemic in northern Italy. The numbers from Tuesday reveal the full extent of the disaster in Lombardy: a total of 5,791 cases with 135 additional deaths within just 24 hours. On Tuesday, there were 466 coronavirus patients in the intensive care wards of different hospitals. "We won’t be able to withstand another two or three weeks of this kind of crazy increase in the numbers of people in emergency rooms and intensive care wards,” warned Giulio Gallera, Lombardy’s top health official.

The intensive care unit at the hospital in Cremona.

Within just two weeks, he says, they have managed to establish an additional 223 intensive care beds, with a further 150 in planning. But demand continues to climb, with a third of those suffering from the disease now under 65 years of age. The option of setting up additional beds in containers or at the Milan convention center is being seriously considered, says Gallera. In describing the psychic and physical strain being faced by hospital personal, Gallera quoted a doctor working on the frontlines: "I will never forget the eyes of the patient who I hooked up to an artificial respiration device this morning.”

"Nobody knows if the apex of the epidemic is ahead of us or behind us.”

"Corona hit us like a tsunami,” says Raffaele Bruno, chief physician for infectious diseases at San Matteo Hospital in Pavia. This city, too, is in Lombardy, located around 30 kilometers from Codogno, and it is where so-called "patient zero” was treated in the intensive care unit, a 38-year-old manager. Bruno says that he and his staff have frequently worked 18 hours a day in recent weeks. "Every doctor, every nurse is involved.” For the moment, Bruno says, his hospital still has enough beds in the intensive care unit, "but nobody knows if the apex of the epidemic is ahead of us or behind us.”

"I Was So Exhausted"

In Italian social media, a photo has been making the rounds that was uploaded by Francesca Mangiatordi, a doctor who works in the emergency room of Maggiore Hospital in Cremona. The image shows the nurse Elena Pagliarini, who had fallen asleep from exhaustion at her computer wearing surgical gloves, a hair net and protective clothing. In an interview with the Italian website Nurse Times, Mangiatordi said that spending cuts have been hampering the Italian health-care system for years, with the number of beds available having been reduced and nurses poorly paid.

"And now we find ourselves facing this immense challenge. We don’t even know how we should staff the shifts.” Those on duty, Mangiatordi said, are running from patient to patient. "We are not able to provide everyone adequate care.” Pagliarini, the nurse in the photo, told the Italian daily La Repubblica: "My shift hadn’t ended yet, but I was so exhausted.”

"The situation is dramatic,” says Guido Marinoni of the state medical board in Bergamo, also located in Lombardy. "We are still able to admit those patients suffering from the worst breathing difficulties, but we are forced to send home even those with double lung infections. They can only get treatment from their family doctor.”

Sixty percent of seriously ill Italians live in Lombardy, but other regions have proven reluctant to help by taking on patients because the danger that the disease could rapidly spread there as well. As of Tuesday, only 15 had been moved to hospitals in Tuscany, Latium and Friuli, with those regions and others concerned that they might ultimately need the beds themselves.

But it’s not all bad news coming out of Italy, even if the small bits of optimism tend to be drowned out by the alarming reports from the country’s hospitals. "Patient zero” has since been moved out of the intensive care unit at the San Matteo Hospital in Pavia and can breathe on his own again. And the call for donations started by the rapper Fedez and his wife, Chiara Ferragni, to assist the San Raffaele Clinic in Milan received 165,000 donations in just the first day, collecting 3.1 million euros. 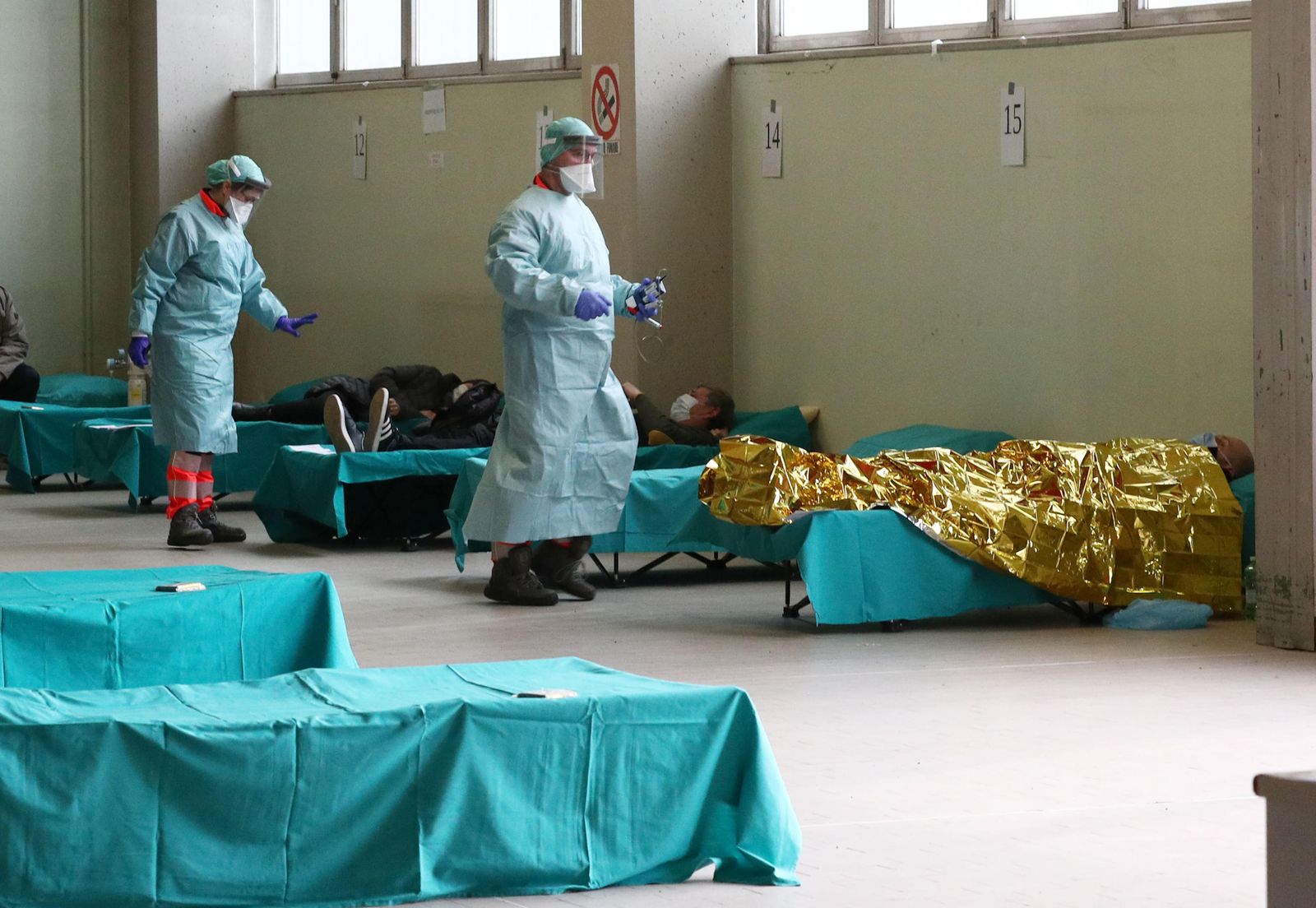 Doctors testing suspected coronavirus patients in front of the clinic in Brescia. 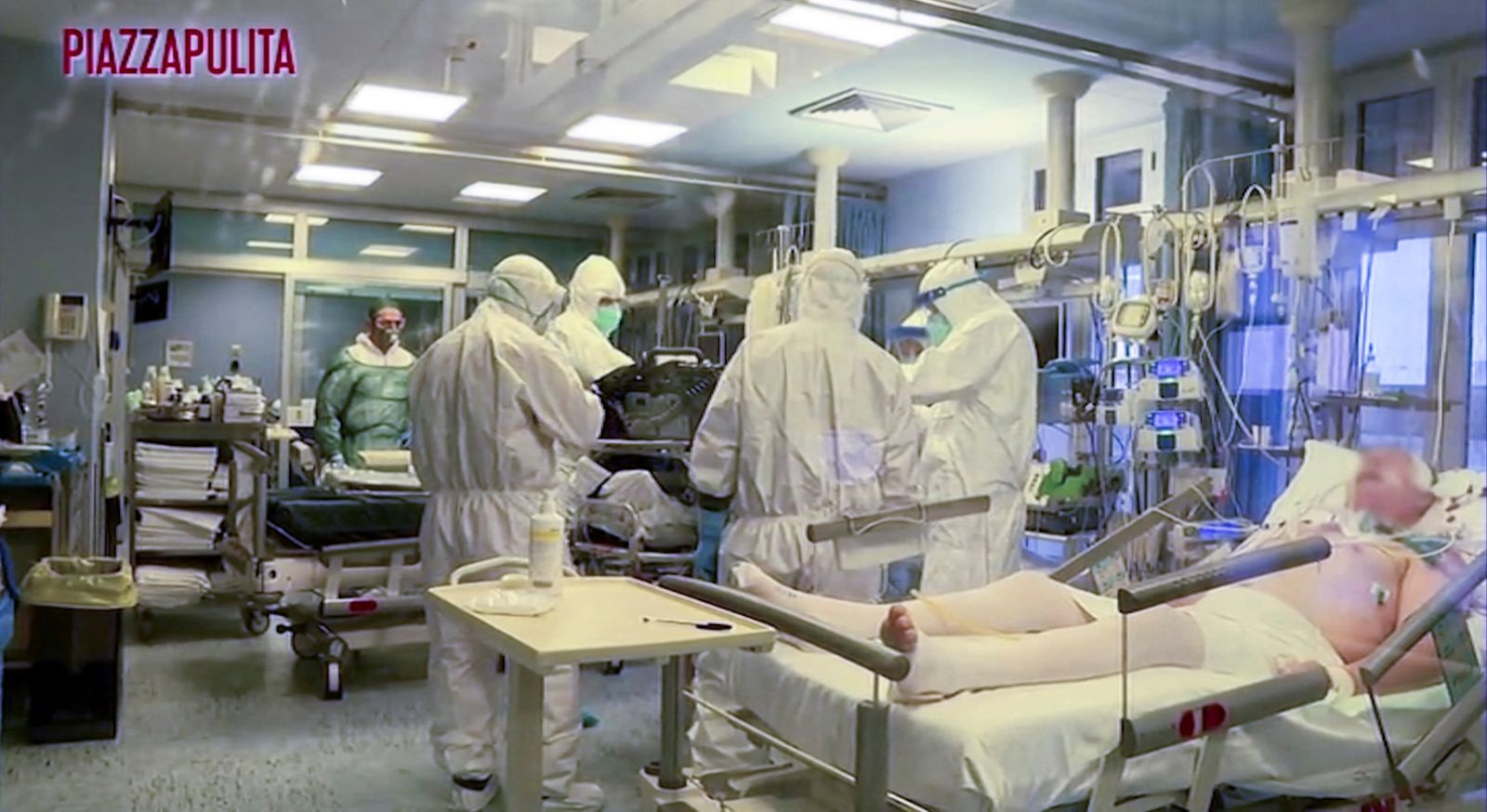 The intensive care unit at the hospital in Cremona.