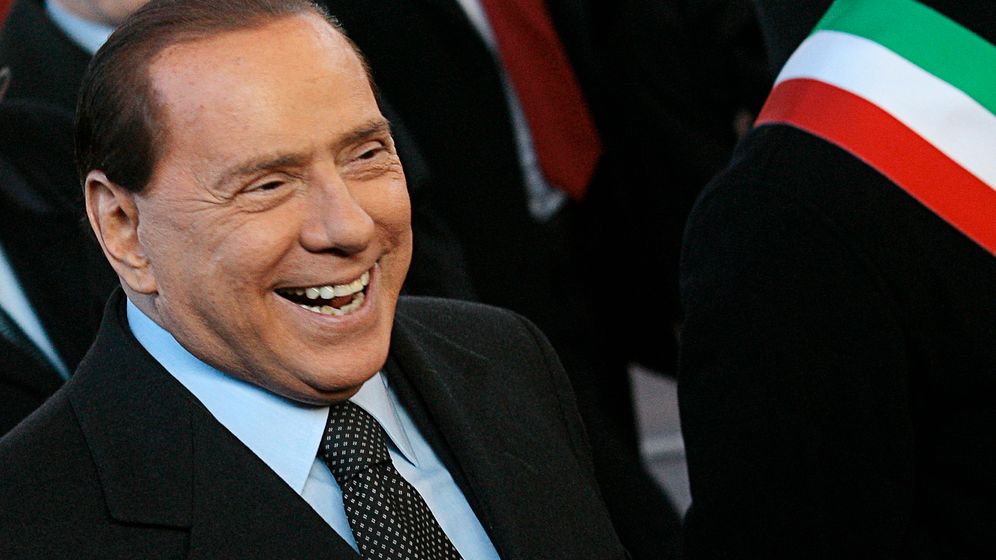 Should 74-year-olds be hosting group sex parties? Absolutely. And should they also be in charge of the government affairs of a core European Union country? Silvio Berlusconi would answer this question enthusiastically in the affirmative. "No one can convince me to change my lifestyle," the Italian prime minister has said. "I'm proud of it."

Once again, Berlusconi finds himself at the center of a scandal that involves underage women, prostitution and the abuse of power. And, once again, there are those who are predicting his political demise.

Gianfranco Fini, president of the lower house of the Italian parliament, the Chamber of Deputies, who has announced that his center-right party no longer wants to cooperate with Berlusconi, is demanding that the prime minister take "a step back." Last week three members of the Chamber switched party allegiances to join the former foreign minister's camp.

And all of this happened because of Karima el-Marough, the young woman who has just turned 18 and calls herself "Ruby Rubacuori," or "Ruby the Stealer of Hearts?" When she was just 12 years old her Moroccan father, who lives in Sicily, allegedly tried to marry her off to a much older man. Ruby fled and since then reportedly survived by stealing and working as a prostitute. Her dream was to join the world of showgirls, the world of Silvio Berlusconi.

An Evening with the Prime Minister

In May Ruby, still a minor at the time and without papers, was charged with stealing jewelry and cash. The Milan police were surprised to receive urgent calls from the office of the prime minister. Berlusconi's aides told the police that the girl was a relative of Egyptian President Hosni Mubarak and was to be released immediately. The prime minister himself reportedly spoke to the police, as well. "If I can help people in trouble, then I will," Berlusconi said, commenting on the matter.

The public prosecutor's office has stated that the release was legal. Nevertheless, it is still investigating a modeling agent suspected of having seduced minors into prostitution. Ruby allegedly told the authorities that she received €7,000 ($9,730) and other gifts for one evening.

An evening with the prime minister.

She also mentioned the name of a game that was allegedly played during parties: "Bunga-Bunga," an expression Berlusconi allegedly borrowed from Libyan leader Moammar Gadhafi. But the girl stresses that she never had sex with the premier.

Rome has long been full of rumors about sex parties at the prime minister's house, Villa Arcore near Milan, lavish affairs complete with half-naked young women and lap dancers, wine, drugs and seafood, Neapolitan songs performed by the master of the house, repeated hymn-like invocations ("Thank God for Silvio"), and all of it surrounding a golden throne that would suggest a liturgy dreamed up by Fellini. But the real Bunga-Bunga, reserved for the inner circle, allegedly took place afterwards, in Berlusconi's private rooms.

The Catholic weekly newspaper Famiglia Cristiani may describe Berlusconi as "sick and of unsound mind." Some may poke fun at "Burlesque-oni." But the prime minister applies the categorical imperative of the populist: Say nothing unless you can assume that the majority of voters secretly agree with you. This explains why it doesn't hurt Berlusconi to say: "It's better to like pretty girls than to be gay." After all, many Italian mothers would say the same thing.

Berlusconi Wasn't Elected for His Morals

Berlusconi talks the way patrons do in the "Bar dello Sport," the Italian version of the neighborhood bar. He lives a demonstrative and uninhibited life. His ideology is that everyone should be apolitical and think of himself first.

Many Italians are indeed ashamed of their prime minister. Nevertheless, as the psychoanalyst Sergio Benvenuto asks in the cultural magazine Lettre International, "isn't there a little Berlusconi tucked away in the corners of every Italian's respectability, even if he feels nothing but revulsion for Berlusconi?"

Meanwhile, the opposition doesn't exactly occupy a moral high ground. Berlusconi's publications reported with relish on how former Prime Minister Romano Prodi's spokesman was photographed conversing with a transvestite back in 2007. And the center-left coalition lost control of the Lazio region when its president was caught being driven in his official car to a rendezvous with a Brazilian transvestite.

Morality will not be Berlusconi's downfall. After all, he wasn't elected because of his morals. He may be brought down over the promises he hasn't kept or over the newly growing piles of garbage in Naples. Obsessed with his own problems with the courts, caught in a cocoon of sycophants, this powerful man seems incapable of achieving reforms. The fact that Italy survived the credit crisis more effectively than Greece, Portugal and Ireland is solely the achievement of Finance Minister Giulio Tremonti and the Italian economic system, which is still very traditional.

Many now hope that Gianfranco Fini will play the role of Brutus -- and not, as he has until now, that of Fabius Maximus, the Roman general known as the Delayer for his dithering ways.