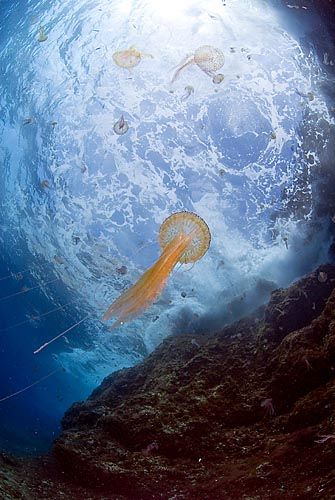 Pelagia noctiluca normally pester humans in the Mediterranean -- but they also seem to like salmon.

Marine biologists are struggling to explain a series of bizarre jellyfish attacks which destroyed the entire fish stocks of a salmon farm in Northern Ireland.

The farm, which is operated by Northern Salmon Co. Ltd., suffered a massive and unexpected jellyfish attack last week before being revisited by the same poisonous, ghostly tide over the weekend. The owners of Northern Salmon say they had no defense against the attacks, and what caused the unusual swarm is still a matter of debate.

The first attack was like a Biblical plague: Billions of purplish pelagia noctiluca, or mauve stingers, drifted over cages of salmon in Glenarm Bay and stung to death about 120,000 fish. Estimated damage to the organic farm -- which sells salmon to high-end caterers in Britain -- was over £1 million ($2 million, €1.4 million). The jellyfish wiped out the company's mature harvest a month before Christmas.

The UK's chief fisheries officer at the Department of Agriculture, Mark McCoughan, told the Belfast Telegraph last Thursday that Northern Salmon would now have "no cash flow" until autumn 2008, when young fish at another site, Red Bay, were big enough for the market. By Saturday, though, the Red Bay stock had been killed off by jellyfish too.

John Russell, the head of Northern Salmon, who had taken up his job at the farm only three days before the first attack, told the Associated Press that he hadn't experienced anything like it in 30 years. "It was unprecedented -- absolutely amazing," he said. "The sea was red with these jellyfish and there was nothing we could do."

A Question of Scale

Even marine biologists who believe the swarms were a natural occurrence were surprised by their scale. Until now, experts had thought of the waters off Ireland and Britain as too cold to make a home for these particular jellyfish.

Mauve stingers typically bother swimmers in the Mediterranean. The summer of 2007 saw swarms of them off Spain and southern France, and in 2006 they plagued swimmers in Italy. However the poison doesn't kill humans; it just leaves painful burns on the skin.

During the first attack in Northern Ireland last week, a floating bank of mauve stingers carpeted the Glenarm cages, stung the salmon, and kept Northern Salmon employees from reaching the fish. Three boats tried to push their way through a mass of jellyfish 10 miles square and 35 feet deep (16 kilometers by 11 meters), workers said.

"One of the difficulties with the Glenarm site is the strength of the tide," McCoughan told the Belfast Telegraph. "The tide pulled in the jellyfish and the water cannot move through the cages. The fish (were) stung and asphyxiated because they have no water moving through the cages to bring oxygen." He added that the attack was "an unusual natural phenomenon which is unprecedented in Northern Ireland."

What may seem surprising is the choice of prey: Why would jellyfish go after salmon? They're known to kill and ingest herring larvae, but not grown fish. Did they just want a nice fat organic lunch?

Of course not, says German aquaculture expert Uwe Waller. "It was a massive fluke," he told SPIEGEL. "Jellyfish movements are determined by ocean currents. What happened there is absolutely natural."

Jellyfish aren't strong enough to swim against a tide, and anything that disturbs their tentacles will get stung. Within a hundred-thousandth of a second, stiletto-shaped thorns shoot from tiny stinger capsules with a tremendous force that can pierce even the plates of a crustacean.

The stingers are like harpoons, connected to the jellyfish by fine threads which transport poison to the victim's muscles and blood. The jellyfish then draws its prey gradually up to its mouth opening. "The mechanism is brilliantly sophisticated," says Waller. "You have to take your hat off to a creature like this."

But what truly impels "blooms" of jellyfish, and what patterns they follow through the sea, is still largely a riddle. "Compared to fish, they're a neglected research topic," said marine biologist Ulrich Sommer, who added that jellyfish belonged to one of the "future research priorities" of his field.

Many scientists regard an unprecedented swarm of Mediterranean jellyfish in Northern Irish waters as a sign of global warming. The frequency of mauve stingers in the North Sea has, in fact, risen over the last 10 years. There are other factors, though. Jellyfish swarms large enough to rip fishing nets which were found off Namibia last year were attributed to overfishing.

Biologist Chad Widmer from the Monterey Bay Aquarium in California told National Public Radio at the time that the key to understanding jellyfish blooms was knowing where and how their "polyps," or early life-cycle forms, develop. Adult jellyfish produce polyps sexually, but the polyps then anchor themselves to a hard surface and wait for the right conditions to make asexual copies of themselves.

"Environmental clues, like changes in water temperature or salinity, turn on jellyfish production mode," said Widmer. "The thing that really makes it impossible for those of us studying jelly-bloom ecology is that nobody knows where the polyps live in nature. That's the holy grail of jellyfish ecology."

With reporting by Frank Thadeusz