When the call came last fall, Deborah Schembri was outside walking her dog. A member of parliament had made a motion to overturn the divorce ban in Malta, the last EU country with such a law on the books. Now a TV station was calling to ask if Schembri would be willing to explain the new law on a talk show -- and if she dared to take up the fight against the country's powerful church. Schembri agreed immediately.

They couldn't have picked a better person for the job. For the last decade the family lawyer has run her own small legal firm on a street near the beach. She understands the ills of modern life -- particularly those the Roman Catholic Church in Malta refuses to discuss. What God has joined together, let no state put asunder, the church insists. But sometimes there just isn't any other way, Schembri argues.

Eight months later, Deborah Schembri has won the fight. The crowd cheers as she takes the podium, wearing a high-necked blouse, with subtle make-up and her hair in a sober braid. Just one hour prior, she'd beamed when someone whispered the first results of the vote in her ear.

Now she's standing in a garden café outside Valletta, Malta's capital, for an impromptu press conference, her first public appearance since the divorce referendum. A Spanish journalist who flew in from Brussels asks the key question: "Mrs. Schembri, do you believe Malta is more European today than it was yesterday?"

Schembri tenses, her answer as prompt as ever. "Malta is just as European as it was yesterday," she says with a gentle smile. "The point is that we just realized it today."

Deborah Schembri's day is a historic event for Malta. In the referendum, fifty-three percent of the population voted in favor of having the right to divorce. It's a clear result and an unexpected victory. Only Schembri believed in her mission from the beginning.

Divorce is not the only thing at stake here. This is also about the influence of Catholic Church, which has now suffered a historic setback. Schembri and her side succeeded in bringing Malta in line with modern standards. Only the Philippines, Andorra and, of course, the Vatican still forbid divorce. The achievement comes thanks to the 35-year-old lawyer with the plump figure and crystal clear intellect, a woman feared by many in Malta.

Schembri was an unknown in Malta before this. She lives in St. Paul's Bay, where the Apostle Paul is said to have run aground during a storm 2,000 years ago. The powerful Knights of Malta ruled here for 270 years and 98 percent of the island nation's 400,000 inhabitants are Catholic, with more than 70 percent attending mass on Sundays. Pope Benedict XVI visited Malta last year in honor of St. Paul and praised the country's inhabitants, saying, "You should be proud that your country both defends the unborn and promotes stable family life by saying no to abortion and divorce."

But Schembri's clients tell a different story, one of psychological terror and domestic violence, of husbands who have second and third wives and don't pay child support. They describe taking part in divorce tourism to Great Britain, where couples live for a few months in order to end their marriage under British law. They also describe abortion tourism to Sicily, where Maltese women terminate their pregnancies in backstreet doctors' offices. Meanwhile people in Sweden can divorce by mail and homosexuals can marry in Denmark, Schrembi says, adding that she wants Malta to finally join the modern world.

Until now, the only way out of a bad marriage in Malta was through annulment by a church court, in cases where one spouse was deemed schizophrenic or addicted to drugs. But annulment proceedings are complex and can take up to 14 years. Schembri formerly represented clients in front of this court, but the church forbade this when she spearheaded the divorce campaign.

Malta's bishops did everything they could to fight the divorce law, plastering the island with posters showing children imploring their parents, "Don't plunge us into disaster, vote no!" Schembri was present when priests told congregations that "Jesus is watching when you go into the voting booth" and claimed that the Holy Virgin was weeping bitter tears at a procession in her honor. "That's not Catholicism," Schembri says. "That's crazy."

Shortly after polling stations closed on May 28, the church realized it had gone too far and the archbishop issued an apology to the faithful. Without the church's "spiritual terrorism," Malta's newspapers later wrote, the people would have voted in favor of divorce by an even larger margin.

The morning after the referendum, Schembri is at her office to fine-tune the divorce bill, which parliament is expected to pass this summer. In the afternoon, she picks her son up from preschool. Ryan, a four-year-old with blond hair and blue eyes, jumps into her arms. Another mother pats Schembri on the back. A father asks if she will help him leave the church, saying he doesn't want to be part of the old men's club of liars anymore.

Schembri believes leaving the church is going too far, though. She herself is religious and wants her fellow citizens to engage in debate with the church, not abandon it. She separated from her husband after their marriage failed three years ago. But divorce, she says, isn't an option for her, because she doesn't want to take her son away from his father. For now, she says she's satisfied with the prospect of being allowed to marry again someday and have a few more children -- ideally four. 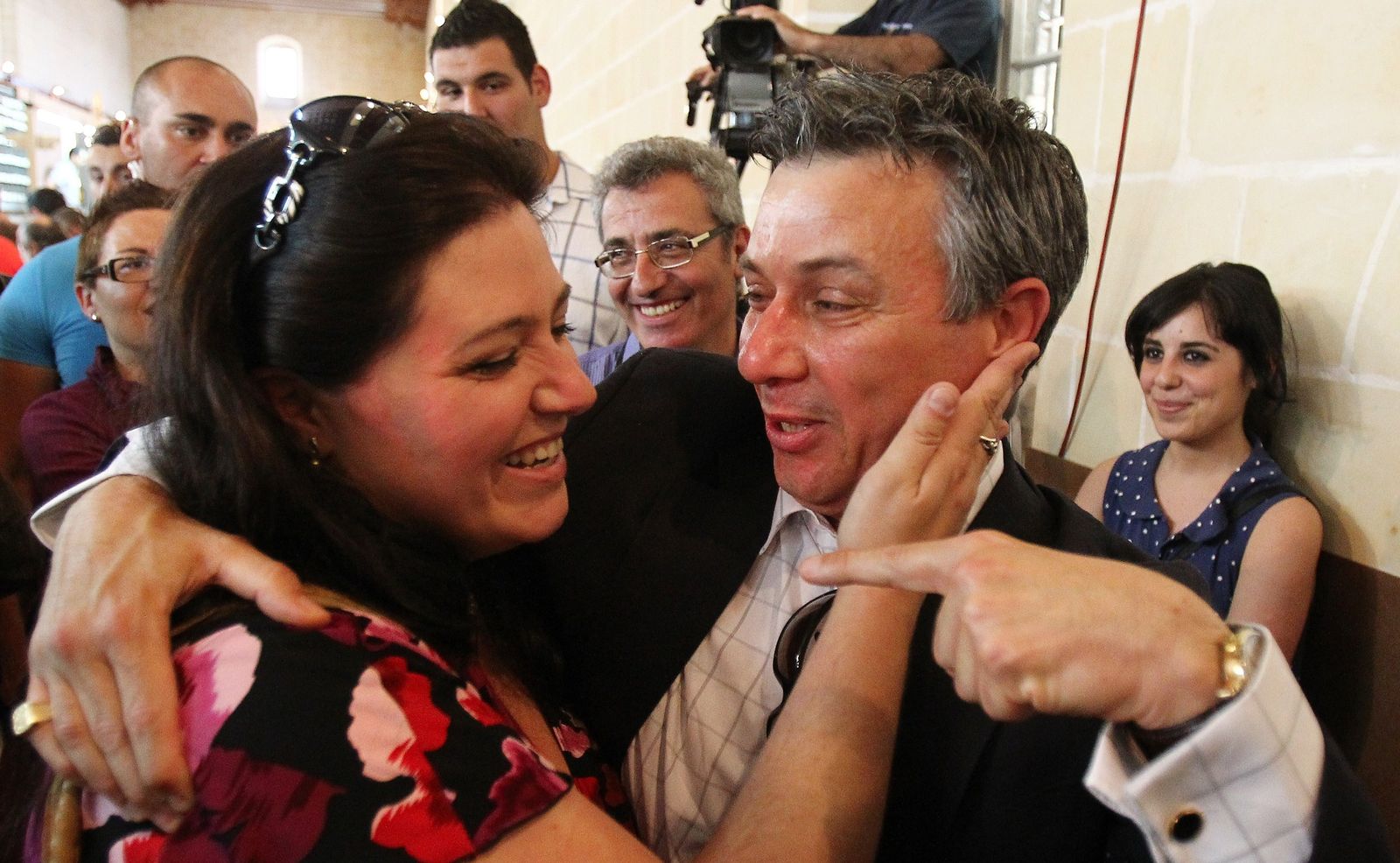 Schembri celebrates the results of Malta's referendum to legalize divorce on May 29.