The task was simple and at the same time a bit silly: Each of the 12 leading French candidates for European Parliament elections was to bring an object that symbolized Europe for them to the first TV debate. The conservative candidate with the Republican Party brought a copy of Homer's "Odyssey;" the leftist politician Raphaël Glucksmann brought a piece of the Berlin Wall.

Jordan Bardella, the lead candidate for Marine Le Pen's right-wing populist Rassemblement National, held up a red kitchen sieve to the camera. He was quite earnest as he did so, and it made for a rather absurd contrast: a young man in a suit, with his boyish face and slicked-back hair looking not unlike a bank apprentice -- clutching a kitchen utensil.

Bardella may only be 23, but he has a clear understanding of how political propaganda works. "I didn't have to think for very long, the sieve was perfect," Bardella said two days later. "Just like that sieve, the EU lets a lot through: Weapons, migrants and terrorists," he said. "Products that endanger our health. The EU isn't protecting us."

On a recent Saturday morning, Bardella was sitting in his party's local office in Rennes, situated in an industrial park outside the city. He was wearing a rustic outfit including a blue-quilted vest and beige buckskin shoes. No sign is posted to indicate the party has an office here -- for security reasons, as the local party head insists.

Bardella had spent the previous two days with party leader Marine Le Pen, traveling through small towns and villages that other politicians allegedly ignore. "To the places where those who have been left behind live," he said. The left behind, the forgotten: It's the language of Donald Trump and of the Brexiteers. It is the vocabulary of the populist international.

The polls are looking good for Bardella. The party once known as Front National, since rechristened as Rassemblement National (RN), is only about 2 percentage points behind the governing party La République en marche in the polls. At recent press conference, Bardella went down the list of all he wants to accomplish after the election: He wants to restrict free trade agreements, because they "are killing our farmers;" he wants to reduce the number of migrants, because "we don't need immigration;" and he wants to "return control of their money" back to the French. Though he is running for European Parliament, Bardella is anti-European to the core.

Once he finished speaking at the press conference, he turned to his companion and said: "So, Marine, now it's your turn." The two make for a polished team -- the talented suburban boy who has made a name for himself and the party leader who nominated him as the party's lead candidate in the European elections, the youngest ever. The roles are clearly defined: Le Pen is responsible for the overarching ideology and gravitas. Bardella is there to attract young voters. A recent poll taken by the Elabe Institute found support for RN at 23 percent among 18- to 24-year-olds, the party's most-promising voter group.

Both Le Pen and Bardella are radical, no matter how boyish and harmless the candidate may seem. His campaign is focused on the fight against immigration and against the Europe of Macron and Merkel. "The EU border protection agency Frontex behaves like a receptionist for migrants," Bardella said in an interview last week. His role model is Italy's Interior Minister Matteo Salvini of the right-wing nationalist Lega party. And his choice of words isn't particularly novel: They're the same slogans the party has been using for years. But the face is new.

And Marine Le Pen was in desperate need of fresh young faces. The party has been in a state of crisis since its clear defeat in the 2017 presidential elections against Emmanuel Macron. Le Pen's chief strategist and close confidant Florian Philippot, a graduate of the elite university École Nationale d'Administration (ENA) who wanted to make the party more attractive to the young and intellectual, left the party that same year. Even her 29-year-old niece Marion Maréchal-Le Pen, once the youngest member of French parliament, announced she was temporarily turning her back on politics.

For the first time in a long time, the number of party members began dropping. Le Pen changed the party name to RN, the National Rally, because the old one evoked the right-wing extremist period under her father, but at the same time, the party returned to the hard-line course it had taken in its early years. Once again, the party's message is that of giving France back to the French -- a France without immigration.

When you ask Le Pen why she chose a 23-year-old as a the party's lead candidate, she says that Bardella may be young, but he knows real life, the worries of many French, the tough everyday reality in the banlieues around Paris.

A Gift to the Party

And his background actually is something of a gift to the party. Bardella was born in Seine-Saint-Denis in 1995 to a mother who came to France as a child of Italian immigrants in the 1960s. She soon split up with Bardella's father and raised her son as a single mother in social housing, living off minimum wage. Saint-Denis, where Bardella grew up, is home to a large immigrant population and it has become an integral part of his campaign speeches. "The only forest I knew for a long time was a dreary row of skyscrapers, but I still feel a deep connection to Brittany," he told listeners during his recent campaign tour.

Bardella is the son of an immigrant and yet he's going to battle for his party against other immigrants. He is, according to the narrative, a "good" immigrant defending France against the "bad" ones. It's the perfect narrative for the party.

During the interview in the cramped party office that Saturday morning, Bardella said he was confronted by violence early in life -- gangs and Islamist fundamentalists, and drug dealers who would check him after school to make sure he wasn't a police informant. "That was the moment of my politicization," he said. "Saint-Denis was decisive in my decision to get involved politically."

At school, he found himself increasingly defending the positions of Front National. He enjoyed playing the outsider. Even then, he was concerned about immigrants and Muslims, who he felt were taking over the banlieues.

At 16, following the 2012 presidential elections, he officially joined Front National. As a minor, he had to get written permission to do so from his mother, who had never been a member of a political party herself. But she let him do it and in 2015, at the age of 20, he ran a successful campaign to become a member of the regional council for Île-de-France, which includes Paris. He courted immigrants with French citizenship for votes in the banlieues through his "Banlieues patriotes" (Patriotic suburbs) collective. A short time later, Le Pen brought him on board her team for the 2017 presidential campaign.

'Napoleon's Age Was Also Held Against Him'

When asked about his age, Bardella produces a sentence that sounds well-rehearsed: "Napoleon's age was also held against him. He said you grow up fast on the battlefield. And that's true." He may be young, Bardella said, but in contrast to Macron's candidate Nathalie Loiseau, he has already faced voters and won an election.

Loiseau is one of his favorite targets. He describes her as a technocrat who has no clue about the concerns of the French. He, on the other hand, is extremely aware of their worries. He says the banlieue where he grew up is like a microcosm of French society.

An additional campaign event was planned for that afternoon at an address no navigation system seemed to know. The party had invited guests to a field along the D 34 highway near the small town of Bruz, to farm warehouse. It's not always easy for RN to book venues: Many event promoters refuse because of security concerns.

Men in black windbreakers with the letters D.P.S. emblazoned on the back of them pointed the way from the parking lot to the rally. The abbreviation stands for the Department of Protection and Security, but what sounds like a state organization is actually the party's own security service. All visitors were scanned at the entrance with metal detectors. Hay bales were piled up in the hall, and harvesters and tractors were lined up opposite each other. It's precisely in these areas -- neither urban nor entirely rural -- that Le Pen's party is strongest.

The attendees included young families with children, farmers, retirees, well-groomed older ladies in suits and fashionably dressed 30-year-olds. Small children could be seen jumping around excitedly, waving flags. The heterogeneous audience was united in the conviction that their enemies, as they see it, were out there -- in places like Brussels, Paris and Berlin.

Many were there to see Bardella, who enjoys a certain amount of fame due his TV appearances. He leaped onto the stage, took off his scarf and spent 18 minutes talking about the EU, this "cold, soulless machine." About the "Dictatorship of Islamists" and a European Court of Human Rights, which prevents France from sending jihadists back to their home countries because they are threatened with inhumane treatment there. The audience booed. He then went on to talk about the banks and how they had gambled with the French peoples' money. And about an alleged decision by the EU, which never even happened, to take in another 6 million immigrants. That's Macron's Europe, he shouted.

"Let's kill them," someone in the hall shouted back. "No," Bardella quickly replied. He knows he needs to distance himself from such followers. "We're not going to kill them, but let's defeat them at the polls on May 26."

The odds for doing so are looking good, as he said in our conversation earlier in the day. Two years ago, his movement was still isolated on the European stage, he said, but the ideology has since spread and is even part of the governments of Austria and Italy. Such power is currently out of reach in France, but if everything goes according to plan, Bardella could at least get as far as Brussels. 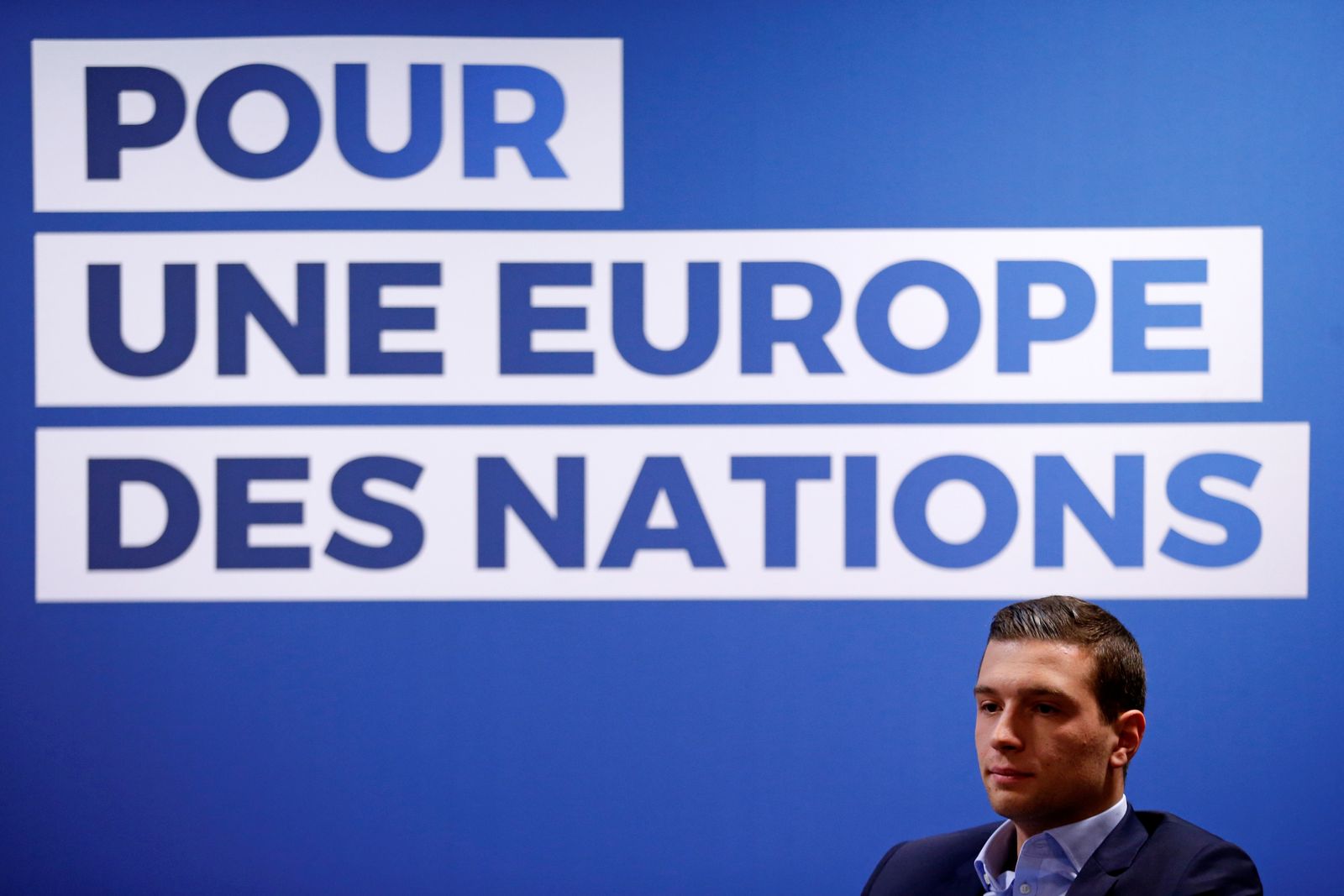 For a "Europe of Nations": Bardella at a press conference in Strasbourg presenting RN's European election platform