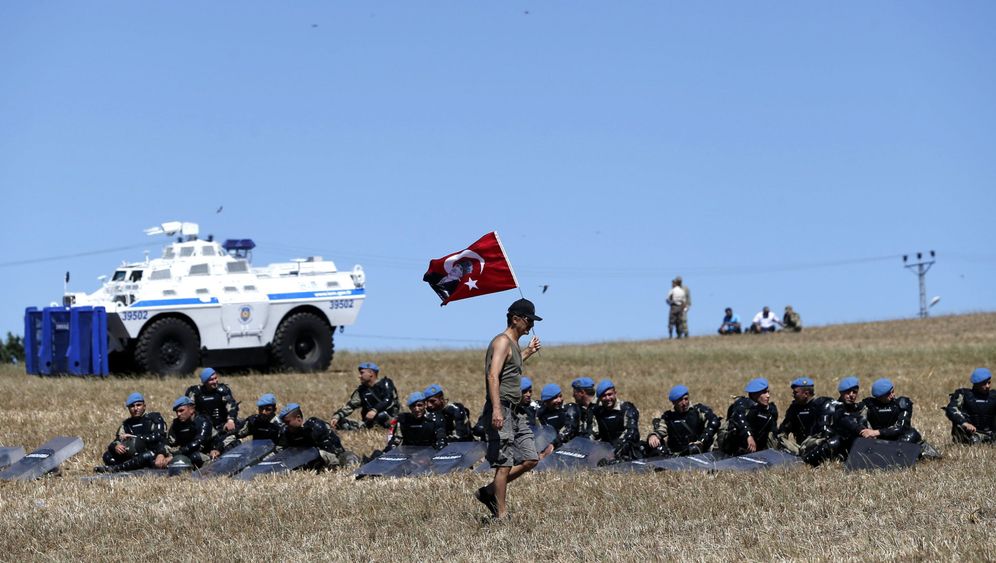 Photo Gallery: Convicted Despite a Lack of Evidence

Adnan Türkkan has been a convicted terrorist for two days now. The young Turk, 30 years old -- and dressed as if he's getting ready to go to the office in a blue shirt and gray suit -- is sitting in a basement apartment located near the central train station in Frankfurt, Germany. He's trying to decide whether to return to his home country -- or to apply for political asylum in Germany. As of Wednesday of last week, he was still uncertain.

On August 5, a special court convicted Türkkan, a student leader and the editor in chief of the television station Ulusal Kanal TV, in absentia of membership in the "armed terror organization Ergenekon." Türkkan first learned of his conviction through newspaper and television reports. He suddenly found himself an enemy of state.

"Ten years long," he says ponderingly. "Because I allegedly committed a so-called terrorist crime, they have sentenced me to 10 and a half years in prison. But I would really like to know what kind of crime they claim I have committed." The ruling stated that Türkkan's sentence cannot be commuted because of his "negative behavior" during the trial. It also described him as a repeat offender and stated that "his freedom of movement would be controlled."

Türkkan had flown from Istanbul to Frankfurt together with two journalists friends who were also charged in the case. The three Turkish journalists maintain that they came to Germany to participate in a conference and not to flee their country. Still, they were likely aware that they faced potential sentences involving years behind bars.

The court also convicted colleagues Mehmet Sabuncu and Mehmet Bozkurt Monday, August 5, on charges of alleged membership in the secret Ergenekon alliance -- with one being sentenced to six years behind bars and the other to nine years in prison. The convictions must still be upheld by Turkey's highest court, and the two journalists say they want to return to Turkey for the time being. However, an arrest order is in place for Türkkan, and he says he wants to remain in Germany.

'Trial of the Century'

The men represent three of 275 people who have been charged in the most spectacular and controversial trial in the recent history of the Turkish judicial system. Some 21 accused have been acquitted, but the rest have been convicted and slapped with largely draconian sentences. The court sentenced the former Turkish military chief of staff, retired General Ilker Basbug, to life imprisonment. And Mustafa Balbay, a columnist for the secularist daily Cumhüriyet, was handed down a sentence of 34 years and eight months in prison.

When the legal proceedings began in the summer of 2008, the Turkish press described them as the "trial of the century." At the time, public prosecutors filed charges against dozens of high-ranking former military officers, business people, demimonde characters, politicians, lawyers and academics whom they alleged had established a network of nationalists called Ergenekon. According to Turkish mythology, Ergenekon is a legendary valley in Central Asia where the original Turkic tribes are thought to have lived in the far distant past.

Prosecutors allege that the group had planned assassinations and terrorist attacks, and that the army wanted to take advantage of the ensuing chaos in order to intervene. Under the pretext of restoring peace and order, it would then topple the Islamist-conservative government of Prime Minister Recep Tayyip Erdogan.

At first, many in Turkey believed the disclosures. In a country that has experienced three military coups and numerous interventions by the so-called "pashas" -- a reference to high-ranking Ottoman political elites -- in politics, fears of a putsch still remain very deeply ingrained. And people have known for years about secret connections between the military, politicians and organized crime -- a so-called "deep state" that manipulates Turkish politics from behind the scenes. But just as widespread is a Turkish passion for conspiracy theories. The new wave of arrests simultaneously nourished suspicions that Erdogan was doing more than just trying to put a stop to the "deep state": He also appeared to be trying to put his critics out of commission.

Turkey's opposition Republican People's Party (CHP) has described the Ergenekon proceedings as a "witch hunt" against political opponents. Gareth Jenkins, a British expert on Turkey, says that while a few among the defendants were doubtless involved in criminal activity, the "majority of the accused … appear to be guilty of nothing more than holding strong secularist and ultranationalist views." He describes the investigation as being "politically motivated."

That could well be the reason investigators began to pursue Adnan Türkkan in 2008. On July 1 of that year, several armed police officers with the anti-terror TEM unit stood before the 26-year-old's door and led him away, justifying the detainment with the claim he was suspected of "membership in a terrorist organization."

The student was then placed in investigative detention and interrogated. Türkkan says the interrogations included questions largely focused on "protests critical of the government" he had allegedly helped organize. Türkkan is one of the founders of the Kemalist youth organization TGB, and has never sought to hide the fact that he has little regard for Erdogan's governing Islamist Justice and Development Party (AKP).

He was released four days later because of a lack of evidence, but investigators still kept an eye on him, wiretapping his telephone and confronting him later with the contents of his calls. "They twisted every word and interpreted things in a way that suggested I was a putschist," he claims.

He claims that during the legal proceedings -- which have taken place behind closed doors and out of the public eye -- he only testified one time. He says the justices only asked questions about his personal data. Then Türkkan read a statement. That was it. The statement made by the public prosecutor is a jumble of ominous allegations. It claims, for example, that suspicious business cards and credit cards were found during searches of Türkkan's belongings, that he worked together with radical parties and that he made calls for protests to be conducted against the government. Stringing those patchy details together, they concluded he wanted to establish some kind of Ergenekon youth organization.

Sabuncu and Bozkurt are also still waiting for evidence relating to the allegations against them to be presented. It appears that suspicions against the journalists are based on the fact that they both work for the leftist-nationalist daily Aydinlik. The newspaper had published excerpts of a compromising 2004 telephone call between Erdogan and the former president of North Cyprus in which they discussed the removal of a rival from power. "This conversation was played for all the newspapers in Turkey, but we were the only ones who published it verbatim," Bozkurt says.

Contradictions in the Investigation

Turkey observer Jenkins sees many contradictions in the Ergenekon trial. In a critical report he published in 2009 about the investigation, he writes that "no evidence" has emerged of the existence of a secret organization. There are merely statements from secret witnesses. It also remains unclear who had authored documents cited in the case. And even the transcripts of wiretaps lacked evidence suggesting Ergenekon's existence.

Jenkins finds it particularly odd that virtually every illegal organization known to exist in Turkey is named in the 4,000-page indictment. Going by the charges, one would be led to believe that Ergenekon enjoys ties to the Kurdish separatist Kurdistan Worker's Party (PKK), the Marxist Revolutionary People's Liberation Party-Front (DHKP-C) and the Turkish wing of Hezbollah.

Still, Türkkan is convinced the Ergenekon rulings will have a positive effect in the end. He says they reveal the Turkish government's true authoritarian face and that they may spark a new wave of protest actions. He thinks the situation could heat up this autumn.

To play it safe, however, he wants to continue in providing resistance against Erdogan from afar in Germany. "There is great potential for opposition here," he says. "Many young German-Turks have a problem with the Erdogan government."