On Wednesday evening, the Muslim month of fasting came to a close. For Jews, it was the beginning of the year 5771. But in the few hours between Ramadan and Rosh Hashana, history was made in Potsdam, just outside of Berlin: Kurt Westergaard, the Danish cartoonist, was honored with the M100 Media Prize, given out annually by a group representing the editors in chief of Europe's leading newspapers and magazines. It is an elite collection of heavyweights.

German Chancellor Angela Merkel delivered the keynote address, and Joachim Gauck, a respected German pastor who was a human-rights activist in East Germany, paid tribute to Westergaard in a speech. Both celebrated Westergaard as a pioneer of free speech who has left his mark in history. "Regardless of whether or not we view the caricatures as necessary or helpful," Merkel explained, "Europe is a place where a cartoonist is allowed to do something like this." For his part, Gauck said that bestowing the award on Westergaard was an "appeal to all to remain steadfast, value-oriented and courageous."

The two statements could hardly have been clearer or more unambiguous: for freedom and against fundamentalism; for the values of the Enlightenment and against cultural relativism. While Merkel read her speech from prepared notes, Gauck primarily extemporized, saying things such as: "I am filled with disgust when our advocacy of freedom is defamed in the culture pages as Western hegemony." Merkel declared: "Freedom of religion does not mean that Shariah stands above the German constitution. ... No cultural difference can justify the disregard for fundamental rights."

The roughly 200 invited guests listened on in amazement. Was this the same chancellor who fired the opening salvo in the battle over the recently published Islam-critical book by Thilo Sarrazin by calling it "unacceptable"?

To get a true measure of what happened on Wednesday night in the Raffael Hall of the Sanssouci Palace, one must roll the clock back five years. On Sept. 30, 2005, the Danish newspaper Jyllands Posten published 12 caricatures of the Prophet Muhammad by 12 Danish cartoonists. One of them -- by Westergaard -- depicted the Prophet wearing a turban with a bomb in it. At first, the caricatures went largely unnoticed. But then, a group of Danish imams saw to it that they were re-published in newspapers in the Arab and Islamic world -- and not only the ones originally run in Jyllands Posten. Others, including a praying Muslim being mounted by a dog, were also printed.

Millions of Muslims across the world took to the streets in protest. Danish flags were burned, and Danish diplomatic residences were set on fire and vandalized. But the reactions weren't limited to the Arab-Islamic world. While Islamists in London demonstrated against the affront to the Prophet ("Kill those who insult Islam"), Britain's foreign minister at the time, Jack Straw, told reporters: "I believe that the republication or these cartoons has been unnecessary, it has been insensitive, it has been disrespectful and it has been wrong." Indeed, not a single British newspaper dared to republish even a single one of the 12 caricatures.

The Observer said that Islam would have to be treated with sensitivity in the future. The Daily Telegraph also pledged respect of Islam. And the Times, a flagship of European press freedoms, said its reserve was not born out of appeasement, but out of a desire to wield free speech rights responsibly.

At first, Merkel said nothing. But at the Munich Security Conference in 2006, she said "I can understand that religious feelings were hurt. But it is unacceptable to find therein a legitimation of violent reactions."

When it came to Jyllands Posten and Kurt Westergaard, commentators were unanimous that they "had only wanted to provoke" -- damn the consequences. Indeed, the deaths of the over 100 people killed during the demonstrations were blamed on Jyllands Posten rather than Muslim fanatics. The writer Günter Grass spoke of the "conscious and planned provocation of a conservative Danish paper." Elsewhere, he called the paper "radical right wing." Likewise, he called the violent excesses of the Muslims a "fundamentalist response to a fundamentalist act," essentially equating embassy-torching with cartoon drawing.

Fritz Kuhn, flood leader of the Green Party in German parliament at the time, told the conservative daily Die Welt that it was time for a discussion "on the relationship between freedom of speech and the responsibility that grows out of it." He then went on to say that: "The caricatures make some people feel stigmatized. They reminded me of the anti-Jewish signs during the pre-1939 Hitler era."

Kuhn's party colleague, Claudia Roth, currently a co-chair of the Green Party, called for "level-headedness instead of cultural conflict" and posited that: "De-escalation starts at home." Her warning was directed at the media instead of the rioters.

Germany's recently deposed chancellor, Gerhard Schröder, told the Jeddah Economic Forum in Saudi Arabia that the publication of the Muhammad caricatures was a "big mistake" and called on Europeans to show "more understanding for the feelings of Muslims." Psychoanalyst Horst-Eberhard Richter exhorted the West to "refrain from all provocations that result in feelings of debasement and humiliation. We should have more respect for the cultural identity of Islamic countries.  For the Muslims, it's important to be recognized and appreciated as equals."

Even Franz-Josef Wagner, the prominent German columnist, has felt some solidarity with the offended Prophet: "When we die," he once wrote in the mass-circulation tabloid Bild, "we want to continue the journey. I want to continue the journey, whether as a Christian, a Muslim or a Buddhist -- and not be mocked like Muhammad." These days, though, he's more likely to shower praise on Kurt Westergaard, showing his solidarity for the cartoonist, who narrowly escaped being murdered last January.

One doesn't even need to go that far back to find criticism of Westergaard. At the beginning of this year, right after the failed attack on Westergaard, Andrian Kreye wrote in the center-left Süddeutsche Zeitung: "Whoever causes offense must also concede that the offended person has been offended." Two days earlier, Kreye had just explained how Salman's Rushdie's "Satanic Verses" was different from an ordinary caricature: "One is an intellectual masterpiece that should be defended; the other is a conscious provocation that is about as intelligent as training a tiger by first offering it a ham sandwich and then taking it away."

And now, on Wednesday evening, just nine months later, the editor in chief of Kreye's newspaper sat on the panel that gave Westergaard an award for courage. How the times can change! For Joachim Gauck, that was reason enough to ask during the ceremony in Potsdam, "Could it be that some of you are addressing this appeal to yourselves?" before quickly adding that it was only a "rhetorical question."

"What a difference a day makes," the old song goes, "24 little hours." But sometimes it takes a little longer -- five years, say -- before someone who has been labelled a fire-starter, an evil-doer, an amateur artist and a would-be tiger trainer is praised as a pioneer of freedom of opinion -- and by the chancellor, no less. In his acceptance speech, Westergaard said he would "never forget this day."

On Thursday evening, it's Thilo Sarrazin's turn to make an appearance in Potsdam. But he'll be without the chancellor at his side. For the time being. 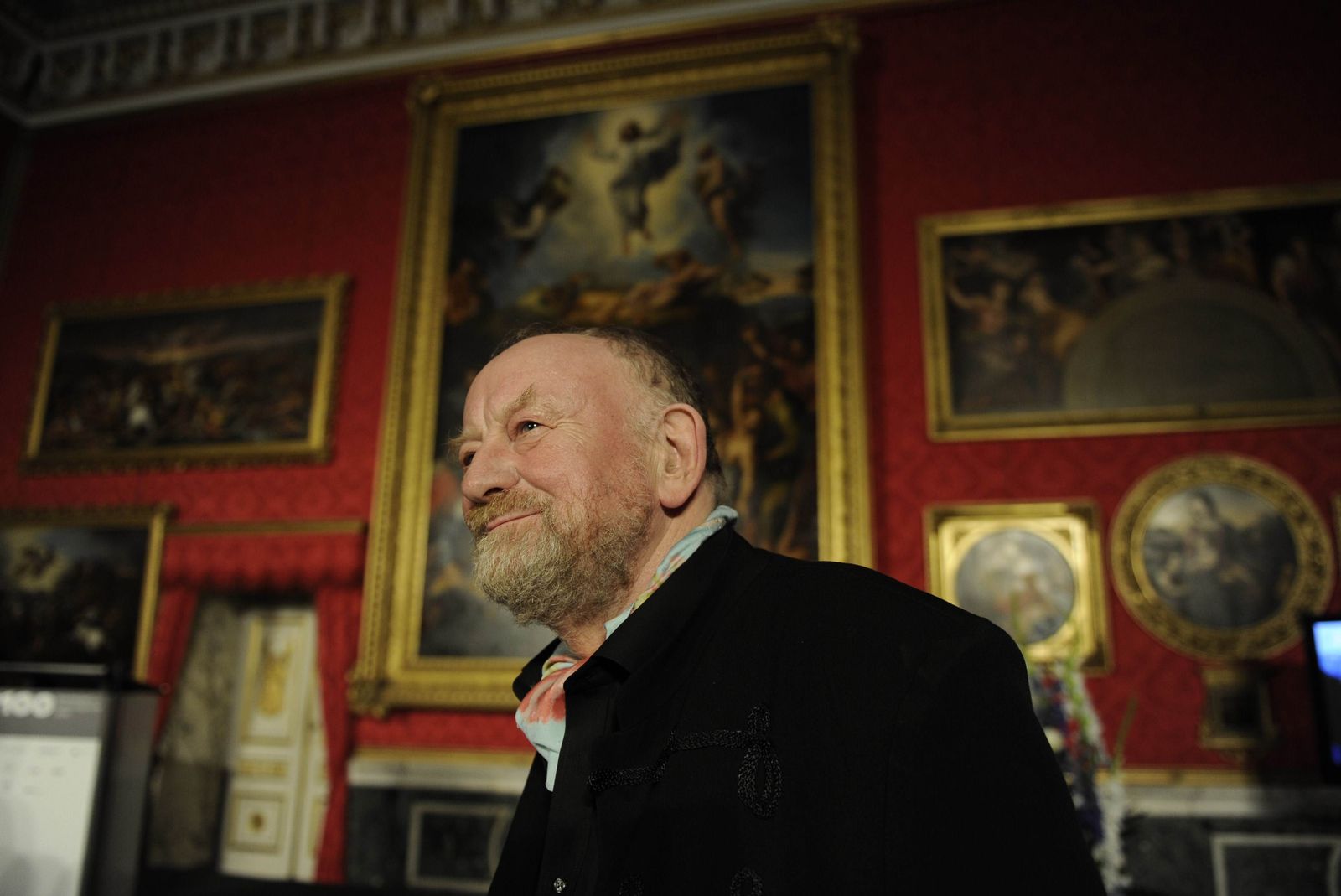