It was a beautiful evening in October and a few dozen German EU employees were gathered at the representation of the German state of Hesse in the European Quarter of Brussels. As is standard for such occasions, the event's primary objective was that of generating a few new contacts over a glass of wine and catching up on the scuttlebutt. But as the evening progressed, the discussion began focusing on the refugee crisis and its causes, an issue that was on the minds of many last autumn.

Martin Selmayr, a member of German Chancellor Angela Merkel's Christian Democratic Union (CDU) and head of cabinet for European Commission President Jean-Claude Juncker, took the floor. "Development Minister Müller isn't worth much there either," he said, referring to the German cabinet member Gerd Müller. Those present exchanged furtive glances, but Juncker's top aid continued undeterred. "The chancellor sees it that way too."

Even days later, Selmayr's comments were still being discussed in the halls of the Commission. It's not often in Brussels that a leading EU official passes judgment on a minister from an EU member state, even in private gatherings. Nor is it normal for such an official to dare to invoke the German chancellor when doing so.

But when it comes to Martin Selmayr, 46, the shock isn't quite as great. The German is the most powerful bureaucrat in Brussels, with some even going so far as to say that he is the true leader of the European Union. As head of Juncker's cabinet, he plays a significant role in determining which laws the EU passes and who is granted an audience with the Commission president. More than anything, though, Selmayr isn't satisfied with the duties typically performed by a top bureaucrat. He is determined to play a greater policymaking role.

Selmayr is one of the architects of the so-called political Commission, Juncker's concept of transforming the body from an agency that merely ensures that EU member states obey the rules into a true executive branch that flexes its political muscles. Most recently, he cleared the way for German Transport Minister Alexander Dobrindt to introduce a toll for travelers from outside Germany driving on the country's autobahn -- a political transaction that violates the spirit of EU laws, if not the letter.

Selmayr's voice in the EU is more influential even than some heads of government, even though he has never campaigned for an elected position. "I have never seen a bureaucrat with so much power," says one long-serving EU diplomat. Selmayr, in fact, has become a particularly welcome foil for critics of the EU. He is seen as the epitome of an EU bureaucracy that controls people's lives from faraway Brussels. Increasingly though, Selmayr is also attracting the ire of EU proponents as well. Last fall, EU Budget Commissioner Kristalina Georgieva told Politico that the working atmosphere with Selmayr "is just poisonous." Her comments came as she announced her resignation from the Commission, with her departure becoming official on Dec. 31, 2016. She has been replaced by Günther Oettinger.

The Rasputin of Brussels is sitting on a leather sofa on the 13th floor of the Berlaymont, the Commission headquarters in the European Quarter. Selmayr doesn't look the part of a villain, his smiling face more boyish than brutish despite his reputation for being Juncker's Doug Stamper á la "House of Cards."

Selmayr, though, prefers comparisons to "West Wing," the slightly older American series in which Martin Sheen plays a benevolent president. That is how the European Commission works, he says, like a big team: "professional, friendly." Important decisions, he says, are discussed jointly by all commissioners during their weekly meetings.

His thoughts come faster than his words, often beginning a new sentence before his listener has had a chance to decipher the one he just finished. Selmayr is the ADHD child of Brussels bureaucracy, but his hyperactivity is a strategy. A lawyer with a Ph.D. from the University of Passau, Selmayr knows how to get the often tedious machinery of EU bureaucracy moving. That much can be said in his favor.

When Chancellor Angela Merkel was facing the refugee crisis in Germany, Selmayr knew how he could make himself useful. He did everything he could to free up billions of euros from the EU budget within just a few weeks, even though expenditures are generally determined years in advance. It was an achievement that even generated praise from Merkel herself.

Handled at the Top

But Selmayr seldom relies on standard decision-making channels, a tendency that European Transport Commissioner Violeta Bulc recently found herself confronted with. Bulc learned from a newspaper report that the Commission had unexpectedly reached an agreement with German Transport Minister Dobrindt on the autobahn toll. The negotiations were handled at the very top.

An agency with 33,000 employees requires firm leadership, of course. But many officials and some commissioners complain that Selmayr is particularly cavalier when it comes to pushing through his agenda. "Early on, we thought his boorish approach would just last for the first six months and then abate," says one person who has had to suffer under Selmayr. "But it kept going."

Some have simply quit in frustration, such as the cabinet head of Valdis Dombrovskis, the commissioner responsible for the euro. The man, from Finland, no longer wanted to watch as the rules of the Stability and Growth Pact were constantly reinterpreted by the newly political Commission for countries like France, Spain and Portugal.

For Selmayr, though, such things are not out of the ordinary. He and his boss Juncker entered office intending to reform Europe and their Commission made it a goal to focus on larger problems rather than pestering European citizens with petty specifications. Recently, though, it is the larger issues where things have been going wrong: the refugee crisis has divided Europe and the British are leaving the bloc.

But such setbacks have not induced a more reflective approach from Selmayr. On the contrary, he is wont to see the positive sides to Brexit, even if he would never say so openly. Didn't London always stand in the way of a joint defense policy?

The door to Selmayr's office suddenly opens and Juncker strides in without knocking. The Commission president had just finished an appearance before journalists with the Ukrainian president. "Good press conference Jean-Claude," Selmayr says. If Selmayr is the most powerful bureaucrat in EU history, one reason is the fact that Juncker has given him such a long leash. Juncker is not the kind of hands-off president that many have accused him of being, but he is happy to leave those issues to his cabinet head in which he has no great interest.

'Someone Who Is Tough'

Recently, for example, when the conservative floor leader in German parliament visited Juncker, he was unable to answer questions about the planned registration program for travelers to the EU. According to meeting participants, Selmayr discreetly handed his boss a note with the requisite information.

Juncker is amazed by Selmayr's enthusiasm for work, often mixing in a bit of sarcasm with his public praise. "My sympathies, ma'am," he jokingly told Selmayr's wife at the end of 2015 when the three of them appeared together on a panel in Passau.

Selmayr's climb began where many a Brussels career has ended: as an aide to European Parliament veteran Elmar Brok. After serving the German parliamentarian, Selmayr transferred to the Commission, where he was responsible for press relations for then-Media Commissioner Viviane Reding before becoming her cabinet head. When Juncker became the lead candidate for the conservatives in 2014 European elections, but nobody knew how to organize a Europe-wide campaign, Brok advised Juncker to give Selmayr a try. "You'll need somebody who is tough," he said. It was a perfect situation for Selmayr: uncharted political waters, very few cumbersome regulations and little time for qualms. After his victory, Juncker made Selmayr his cabinet head.

But Selmayr's leadership style began generating problems even before the new Commission had taken office. Prior to future Budget Commissioner Cecilia Malmström's hearing in parliament, Selmayr redacted negative comments about TTIP from her statement. Unfortunately, though, he was found out because the changes could be reconstructed in the Word document -- and the impression was given that Malmström was not allowed to say what she thought.

Another example of Selmayr's heavy hand came in December 2015 when he was attempting to convince EU member states of the benefits of the refugee deal hammered out between the EU and Turkey. There were, he wrote, "first encouraging indications" that the deal was proving a success. He attached a chart to the message to illustrate that the number of arriving refugees had plunged substantially -- but the chart was inaccurate, as was later revealed.

Even when commenting on heads of government Selmayr has displayed no dearth of self-confidence. In late June, he was standing in the European Council newsroom surrounded by journalists. The British had just voted in favor of Brexit a few days prior and then-British Prime Minister David Cameron was on his way back to London. One journalist asked Selmayr if Cameron had been given a parting gift. "He got a warm meal," Selmayr answered wryly. "That's more than enough."

Within EU member states, Selmayr's self-importance has won him many enemies. German Finance Minister Wolfgang Schäuble was initially supportive, even meeting with Juncker and Selmayr at Berlin's Kaffee Einstein immediately following the 2014 elections to toast their success. But the relationship has cooled significantly since then. Schäuble believes it was a mistake for Selmayr and Juncker to do everything possible to keep Greece in the euro zone in the summer of 2015. The pair likewise offered significant assistance to Greece's then-Finance Minister Yanis Varoufakis, who was new to the Brussels stage, when it came to formulating complicated applications to his EU creditors. When the papers from Athens, composed with their help, finally arrived in Brussels late in the night, Selmayr gushed on Twitter: "New Greek proposal received by @JunckerEU, @Lagarde, @ecb. Good basis for progress at tomorrow's EuroSummit." Schäuble, who would like to have seen Greece leave the euro, grumbled that bureaucrats do not have the authority to make such comments publicly.

Schäuble is now considering how to rein in the power of Juncker and his top aide Selmayr. His position is that the Commission is welcome to conduct politics, but it should then be forced to relinquish tasks such as enforcing the bloc's competition policies. He says that a political Commission can no longer be a neutral arbiter of EU treaties.

Thus far, such threats have been largely empty, as Selmayr well knows. To modify European treaties, all EU member states must grant their approval. And his policies have granted Selmayr sufficient popularity among southern EU member states that he can afford a certain amount of insouciance.

The door to Selmayr's office swings open once again and a coworker hands him a brief note reminding him that his scheduled talk with Greek Prime Minister Alexis Tsipras is imminent. Selmayr hands the note back. The telephone call, he says, should be taken by someone else. 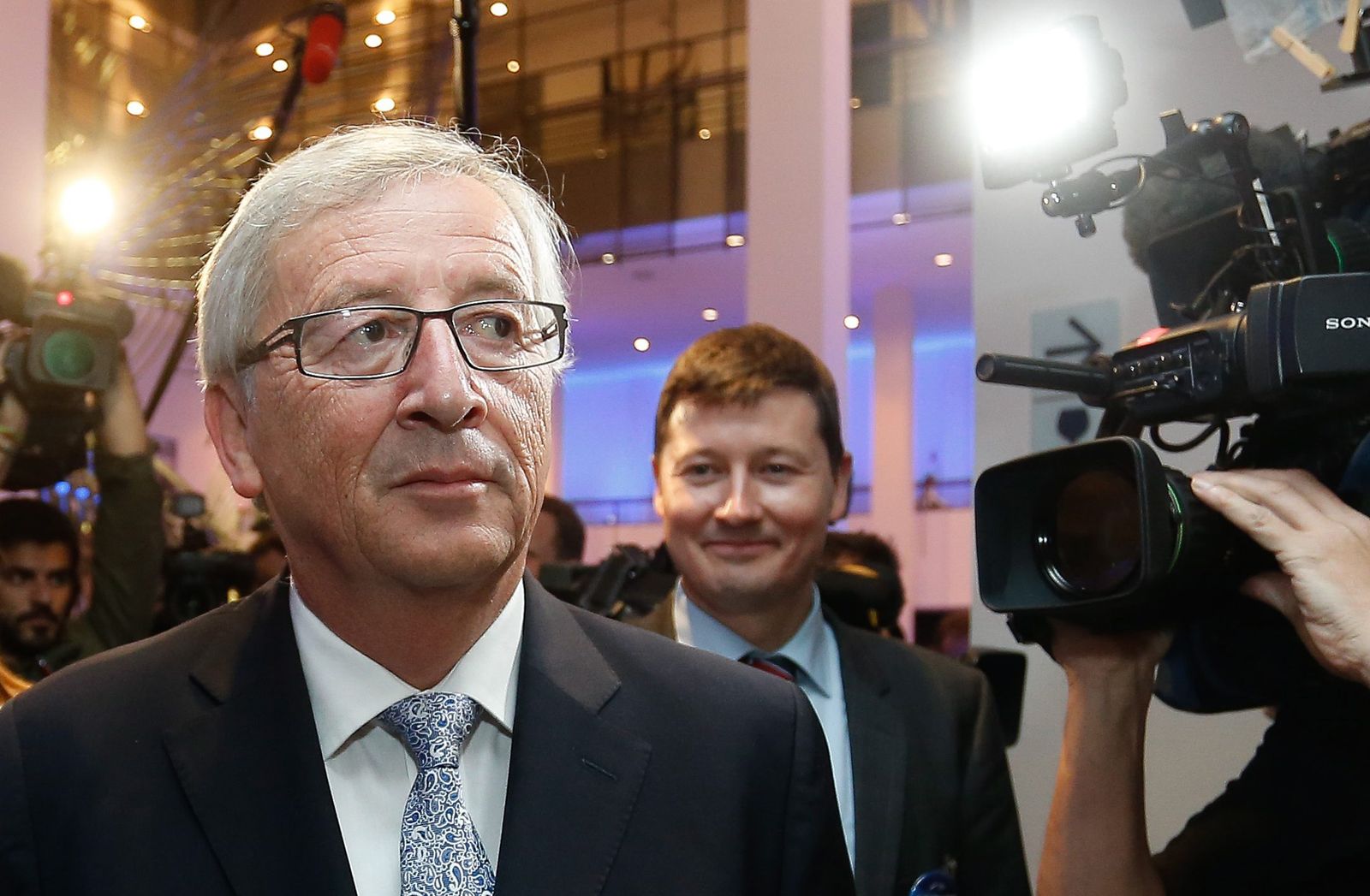