It wasn’t a pleasant appointment for James Brokenshire. In mid-June, the Minister of State for Security at the British Home Office told the responsible committee in the British upper chamber of parliament that Brexit won’t significantly curtail the security situation in the United Kingdom. Of course, he said, the country would continue working closely with the European Union.

The Lords didn’t seem convinced. Welsh Baron Ted Rowlands said the situation had been "hopeless” before the United Kingdom signed onto the European arrest warrant. Wanted suspects, he explained, had been able to move freely in countries without extradition treaties - "including those characters who lived on the Spanish Costa del Sol and felt immune from any formal proceedings.” Rowlands said, "I hope you're not suggesting that we might have to go back to that, are you?”

But Brokenshire couldn’t comprehensively answer multiple questions about how he believed cooperation with the EU could be replaced with something equivalent. At the moment, everything suggests that the British will lose access to all of the EU’s law enforcement networks when the post-Brexit transition phase ends on Dec. 31.

That could change if a comprehensive agreement is signed in time, but that doesn’t appear to be the case at the moment. Quite to the contrary. The British government recently officially ruled out an extension of the transition period, and the risk of a hard Brexit at the end of the year has returned once again.

Mini-agreements could alleviate the worst chaos in certain areas. European Commission President Ursula von der Leyen said in a recent interview with DER SPIEGEL that in that event, the emphasis would need to be placed on certain areas "where there would be the greatest potential damage without an agreement.”

It’s doubtful that judicial cooperation would be part of that. So far, it has, at best, played a background role in the Brexit drama compared to more prominent issues like tariffs, fisheries and the Northern Ireland question. And Katarina Barley, a member of the European Parliament for the center-left Social Democratic Party (SPD) and a former German justice minister, has said that the British have had "no interest whatsoever, let alone  a heightened” interest in the subject.

But much is at stake. For one, collaboration in the Schengen Information System (SIS II), by far the largest wanted-persons database in the EU. It contains data about terror suspects, weapons and several tens of thousands of people who are wanted on European arrest warrants – it contains a total of around 90 million entries. Although the UK was never part of the Schengen area, then Home Secretary Theresa May managed to secure access to SIS II for her country in 2015.

For the British, the deal was worth it. Of the almost 6.7 billion times the databank was accessed in 2019, almost 572 million were from the United Kingdom. Only Spain and France used the system more. The Interpol databases the UK would fall back on contain a mere fraction of that data. Shortly after the Brexit referendum, British Tory politician Timothy Kirkhope warned others that the UK "will end up being a little island off the continent” without SIS II.

And it wouldn’t just lose SIS II access. It would also endanger its participation in:

It would also lose access to 15 other networks, information systems and databases, including the agreement on security at football games whose origins reach back to the tragedy at Brussels’ Heysel Stadium in 1985, when rioting Liverpool fans set off a mass panic that led to 39 deaths.

"Worst-Case Scenario Would be a Terror Attack”

In the event of a no-deal Brexit, the UK would fall back on a number of bilateral or international agreements, some of which are decades old. British police authorities warned politicians shortly after the referendum about such a scenario. Sebastian Fiedler, the chairman of the Federation of German Criminal Investigators, says that people working in European security authorities are "stunned” that Brussels and London "are knowingly sliding into this kind of problem.”

If the British were to exit all EU networks overnight, there would be considerable problems when it comes to joint investigations and the rapid exchange of data. "A request for judicial assistance would be necessary for every individual measure, and there would be a lack of information,” says Fiedler. "That could cause large security problems in the UK and the EU, with a high potential for damage.” British Prime Minister Boris Johnson hasn’t addressed the issue so far.

"The worst-case scenario would be that a terrorist attack happens because information was not exchanged or was exchanged too slowly,” Fiedler says.

Attempts by the London and Brussels negotiating teams to find an appropriate replacement have so far remained largely fruitless. Instead, several disputes have arisen. In a 2018 audit report, for instance, the EU accused the British of violating dozens of the Schengen Information System’s rules. According to a confidential EU report, the British authorities even illegally copied large amounts of SIS II data. The British also reported it had only 9,542 hits on foreign alerts, but that number is not considered to be commensurate to the over 514 million queries made by the British that same year.

Some are also irritated about how extraditions will be handled in the future, given that the British will no longer take part in the European arrest warrant as of 2021. According to an internal EU memo to the member states in mid-June, there has been "almost no progress” on the issue.

Numerous special requests from London would also give the British authorities considerable leeway to reject extradition requests from EU countries. According to the document seen by DER SPIEGEL, the European Commission believes this would be "one-sided” and "not acceptable.” British diplomats, for their part, claim that they only want to anchor "important safeguards” in the agreement.

“We have made it clear to the British: You will no longer make a leap of faith for you.”

Katarina Barley, a German member of the European Parliament

There have also been disagreements over the Prüm Treaty. The UK has been taking part in the exchange of DNA information and fingerprints but, unlike the other countries, has only entered the data of convicted criminals, not of suspects. The EU gave London an ultimatum: If the British government didn’t change its practice by June 15, it would be expelled from the treaty. Ultimately, the British caved. A few hours before the deadline, Brokenshire announced that he would bow to the EU’s demand.

Barley, of the SPD, says that this was a "warning shot” from the EU. "We have made it clear to the British: We will no longer make a leap of faith for you.” Barley is skeptical, though, that they will learn from this lesson. "I am not optimistic that we can reach an agreement on a justice cooperation before the end of the year.”

A potential agreement could also fall through because of the British government’s dogmatic belief that it shouldn’t follow any EU rules in the future, and that it shouldn’t compromise its legal system. In early March, for example, Johnson informed the European Commission that his country would no longer formally apply the European Convention on Human Rights (ECHR).

The EU’s position on this is clear: If the UK follows through on this, law enforcement collaboration would be halted immediately, as was stated in the draft agreement about the countries’ future relations that EU Chief Negotiator Michel Barnier presented in mid-March.

This has not changed. The European Commission argues that the cooperation in law enforcement and judicial matters "shall be conditional upon the United Kingdom’s continued adherence” to the ECHR. The British, meanwhile, stress that they would continue complying with the fundamental rights standards - just not under the oversight of the EU.

Sources in the British government argue that the notion of the European Commission monitoring the ECHR’s implementation in the UK following Brexit is "inappropriate.” They argue it’s not a question of human rights, "but a question of sovereignty.” 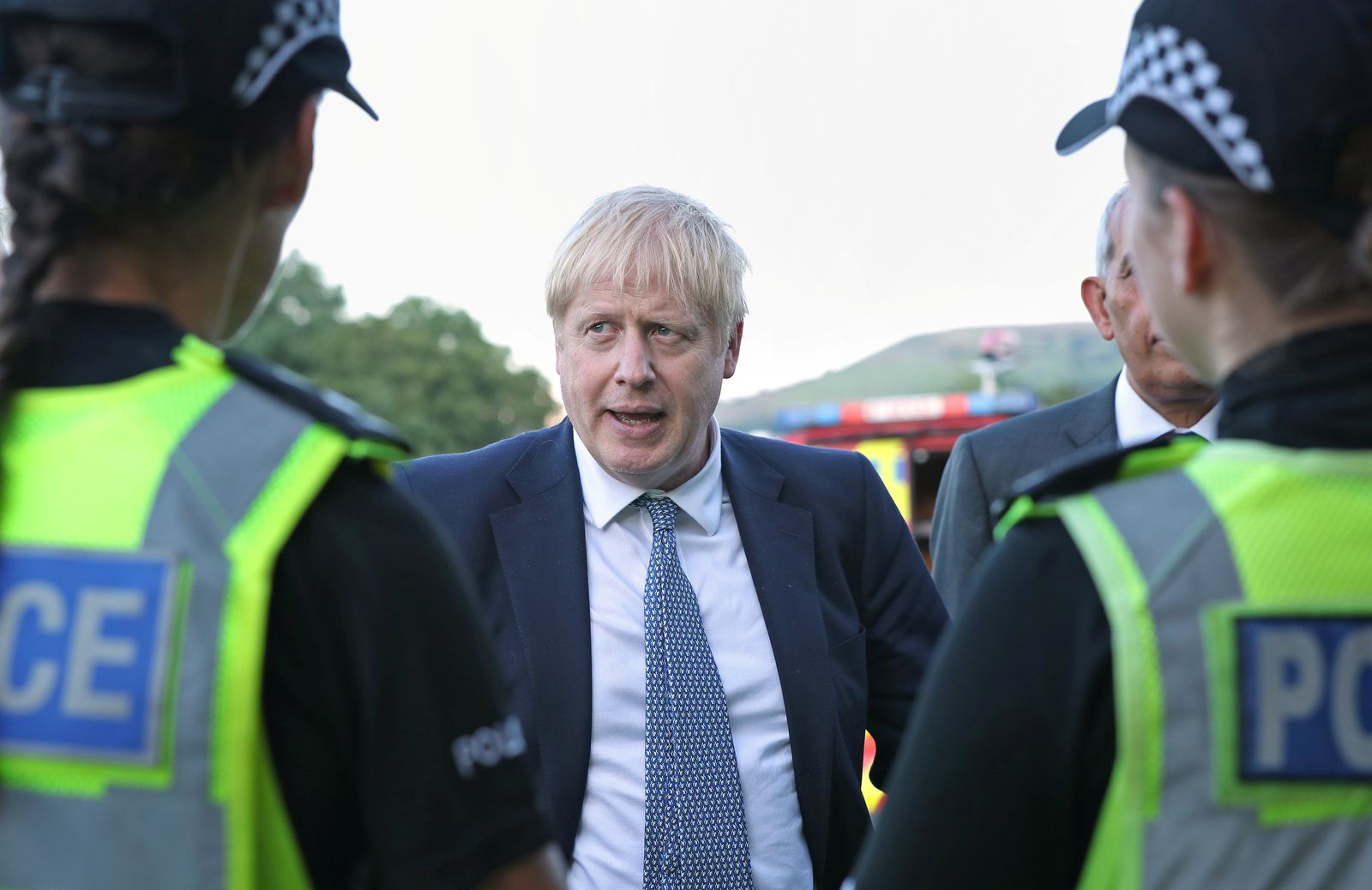 British Prime Minister Johnson with police officers: Cooperation with the EU in law enforcement is at risk.