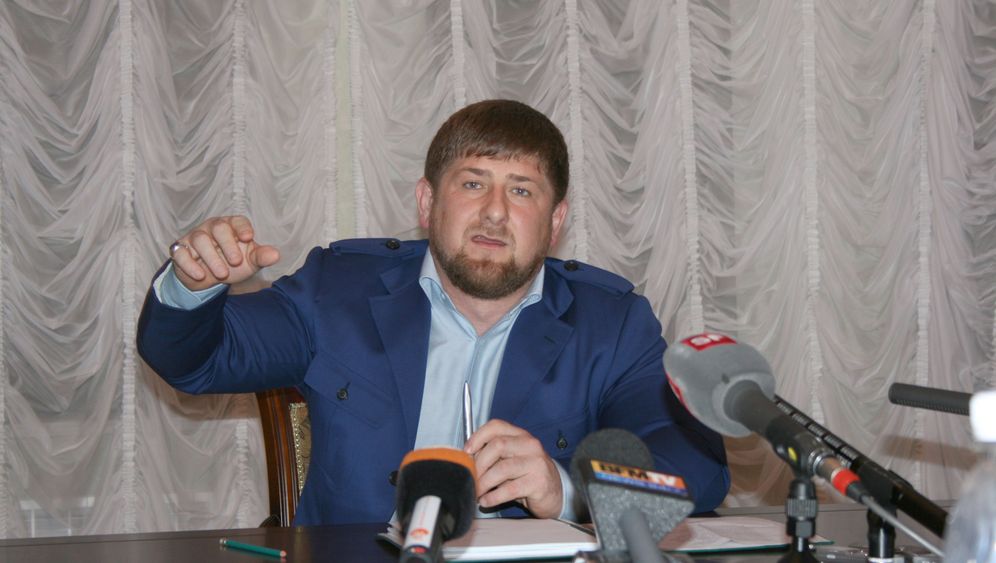 The room in the Berlin apartment has a dark wooden table and oil paintings on the wall. Water is being heated in a samovar. Men with serious expressions come in, embrace each other and sit down to drink tea.

The apartment is home to the translator Ekkehard Maass. The 51-year-old was a dissident in the former East Germany and now runs the German-Caucasian Society. It's a meeting point for Chechen exiles, people who have fled the violence in the Caucasus region and emigrated to the West.

When exiles meet for tea these days, two names are frequently mentioned: Ramzan Kadyrov and Umar Israilov. Israilov, a Chechen exile, was murdered in Vienna on Jan. 13, 2009. Kadyrov, the feared 34-year-old president of Chechnya, a man who likes to pose for photographs with a tiger or holding a gold-plated pistol, was allegedly behind the murder. Both Chechen exiles and Austrian investigators believe that it was a contract killing. Israilov had accused Kadyrov of torture and had brought a case against him before the European Court of Human Rights.

The trial of the suspected killers opens in Vienna on Tuesday. The spectacular murder is likely to be followed by an equally spectacular trial, in which prosecutors will seek to shed light on the exact circumstances of the crime, and on a "military intelligence service" that terrorism experts in Vienna believe Kadyrov developed in Europe. Kadyrov is currently being investigated, although charges have not been brought yet. He denies all involvement in the murder case.

German investigators are also interested in the Chechen president's activities. His agents have been spotted in Germany, where about 6,000 Chechens live. Some 500 of them are believed to be tied to extremist groups. German intelligence officials find it difficult to get a clear picture of the milieu. The distinctions among freedom fighters, terrorists and ordinary criminals are complicated. In addition, some Chechens owe their asylum status to their cooperation with German intelligence, and the lines are sometimes blurred between informants and troublemakers.

One thing is clear, however: Chechens in Germany live in fear of Kadyrov, who has unscrupulous bodyguards. Chechen exiles have frequently told German authorities about Kadyrov's influence in Berlin. The president is apparently determined to convince exiles to return home, if necessary with rough measures. He allegedly has middlemen and agents that he uses specifically for this purpose.

The award-winning Chechen poet Apti Bisultanov was one of the exiles who received an unwanted visit from Kadyrov's men in Berlin. Apparently two former members of the Chechen government were working as agents for Kadyrov in Berlin: the brothers Umar and Magomed Khanbiyev. A witness told Viennese authorities about a conversation he had had with Umar Khanbiyev in Berlin. The Chechen agent apparently told the witness that a major campaign was underway to bring Chechens home, and that Kadyrov was behind it. According to the agent, Kadyrov had a team of six agents working in Europe. They had been provided with Russian visas and were apparently staying in a Berlin hotel.

Kadyrov's agents, say Chechens in Berlin, try to entice exiles to return home with promises of jobs. Apparently the agents have also threatened violence against the exiles' families at home in Chechnya. In the case of Bisultanov, Kadyrov's men and Russian officials worked hand in hand. Russia had demanded his extradition and was trying to torpedo his application for asylum, but was unsuccessful on both counts.

Car Was Found near Crime Scene

One of the men now on trial in Vienna has also been seen in Berlin: Otto K., who was born Ramzan E. in the Chechen capital Grozny in 1968. Among fellow Chechens living in Austria and Germany, he was considered an amiable father and an opponent of Kadyrov. But, as it turns out, he is the owner of a green Volvo that police found near the scene of the crime after the Israilov murder. That is one reason why he is at the center of the Vienna case. Investigators believe K. is one of Kadyrov's henchmen, but K., who is in custody, denies the charges. But if K. is really an opponent of Kadyrov, then why did he go to Grozny in 2008 to meet with the Chechen president? The investigators' files contain photos showing the two men meeting.

And what brought Otto K. to Germany? Officially, the asylum seeker was there in his role as the chairman of a Chechen cultural association in Vienna. Investigators believe, however, that K.'s work on behalf of the association was just a front that was intended to help him gain an insight into the exile community in Germany. In any case, the association's activities appear to not be entirely cultural. During a raid several years ago, German police found firearms in the trunk of a car from Vienna. The car, a BMW, was registered to the cultural association.

In some ways, the conflict in Chechnya already reached Germany a long time ago. Domestic intelligence officials believe that some Chechen refugees are raising money in Germany, money that couriers later forward to rebels in Chechnya. Apparently there have also been attempts to recruit fighters in Germany and to smuggle them to the restive Russian republic.

'There Was a Bad Person Among You'

The discussion around the table in Maass's apartment, however, mainly centers on Kadyrov's attempts at intimidation. The men talk about the Chechen agents' attempts to blackmail exiles on the phone. The Viennese investigators are also familiar with the agents. The police have listened in on many telephone conversations in which the name Kadyrov is mentioned again and again, as are thinly concealed threats. The following exchange is an excerpt from the transcript of one of the calls:

Agent: "There was a bad person among you, who has already been eliminated."

Exile: "The one who was already murdered? I didn't know him."

Agent: "I know who you are. Do you want a few people to come to see you tomorrow and pick you up? Come to us voluntarily. You don't want us to come and get you using force."

In May 2009, a Chechen living in Vienna who had received similar calls contacted the authorities. The terrorism experts were even able to identify the suspect in the case: a wealthy Russian citizen known in Berlin for his big cars and his villa. Was he planning a murder from his base in Berlin? The files suggest that the telephone surveillance and the subsequent investigation did not lead to any action against the suspect in Berlin, however. A memo from Vienna states matter-of-factly that officials took "no further steps." Police investigators in Berlin were told nothing about the case.

Kadyrov's men are also interested in Maass's apartment, but they're not the only ones. As paradoxical as it may seem, German authorities are also keeping an eye on Maass, whose name crops up in the files of the Office for the Protection of the Constitution, Germany's domestic intelligence agency. The files describe him as the representative of a Chechen government-in-exile. Exiled Chechen politician Akhmed Zakayev, who lives in London, named the Berlin-based translator as an honorary consul, prompting the Russian government to lodge a protest with the Foreign Ministry in Berlin. Maass, for his part, has reacted calmly to the Russians' objections.

Sometimes suspicious-looking cars park near Maass's home. The drivers and their passengers are not interested in talking to him, however.