It has been 14 years since Bonsian-Serb leader Radovan Karadzic was indicted. But on Monday, his trial at the International Criminal Tribunal at The Hague in Holland got under way. If only briefly. Karadzic failed to appear and declined to send a lawyer to defend him. Trial judges, however, said that proceedings would continue on Tuesday, with or without Karadzic.

Karadzic himself has said the trial should determine "the final truth" about the 1992-1995 Bosnian conflict. "It will determine future relations in the region for at least a century and perhaps forever," he said. 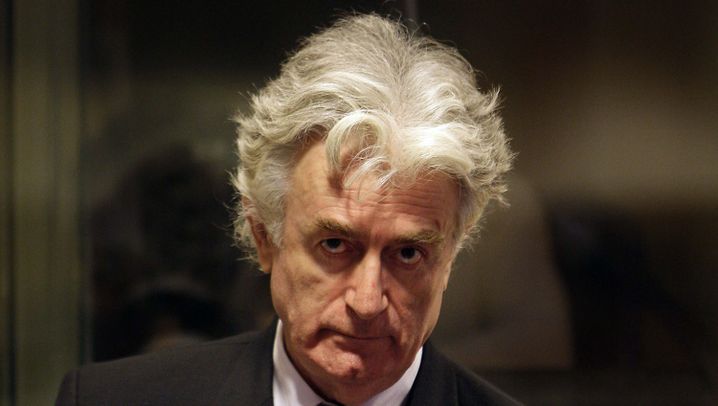 Karadzic faces 11 charges of war crimes and crimes against humanity related to the 1992-1995 Bosnian War where at least 100,000 people were killed. Two of the charges facing him are related to genocide.

The former Bosnian Serb leader remained at large for 13 years, until he was snatched off a Belgrade city bus on July 18 in 2008, posing as an alternative medicine healer called Dragan Dabic.

For three days, he was kept in the dark about what was awaiting him. "I didn't know if I'd been arrested by the authorities or by bounty hunters who wanted to sell me for $5 million," Karadzic said in a recent e-mail interview with NRC Handelsblad.

His kidnappers, Karadzic said, took him to a house where he was locked up in the basement. "They were civilized, but they refused to reveal their identity or that of their superiors. They wouldn't tell me why they'd picked me up and they wouldn't allow me to make a phone call."

Three days later Serbian president Boris Tadic announced to the world that Radovan Karadzic had at last been apprehended by the Serbian security forces, and that he would be extradited shortly to the International Criminal Tribunal for the former Yugoslavia in The Hague.

Dragan Dabic was the perfect metamorphosis: the alternative healer as alias to the ruthless politician. His long gray hair was held together by a pin at the top of his head. He had lost weight, which had made his face narrower, his hollow eyes were hidden behind glasses, and he wore an impressive beard and moustache. In the TV footage there is of him, he is seen shuffling and bent over.

Once he arrived in The Hague Karadzic immediately shaved off the facial hair. He also straightened his shoulders; his eyes were alert again and his voice clear. He refused to be represented by a lawyer, taking it upon himself to prove to the court that he is innocent of the charges against him.

Radovan Karadzic was born on June 19, 1945 in Petnjica, a village in what was then the Yugoslav republic of Montenegro. His parents, Vuk and Jovanka, got married during World War II and Radovan was the first of their five children. His father fought in the war on the side of the Chetniks, a Serb paramilitary group that started out as part of the resistance movement against German occupation, but subsequently switched sides towards the end of the war.

After the war, Vuk Karadzic was arrested by Tito's Partisans, the communist-led resistance, who were settling old scores. Radovan Karadzic was five when his father was released from prison.

The young Radovan was intelligent and well-behaved. "He was as pretty as an apple," villagers told the BBC journalist Nick Hawton, who wrote a book about Karadzic. Karadzic left Montenegro in 1960 and settled in Sarajevo -- what was then the capital of the Yugoslav republic of Bosnia-Herzegovina. He studied medicine there and joined the ruling communist party. At university he met Ljiljana Zelen, whom he married three years later.

Karadzic also sought out artists, writers and intellectuals and took up writing poetry himself. In 1967 he graduated as a doctor. A year later, when Europe was in the midst of the student revolt, he led a student demonstration in Sarajevo. From the roof of the philosophy department he gave an eloquent speech with Serbian nationalist overtones.

In 1974 Karadzic won a literary scholarship to Columbia University in New York, where he learned to speak and read English fluently. However, it is a language he refuses to speak in court in The Hague. "I'm not going to defend myself in a NATO language," he has said.

Upon his return to Yugoslavia, Karadzic set himself up as a psychiatrist and became the team psychologist for the Red Star Belgrade football team. In 1990 he co-founded the Serbian Democratic Party (SDS) as a response to Alija Izetbegovic's Party of Democratic Action (SDA), whose followers were mostly Bosnian Muslims.

This was around the time when Yugoslavia, which had been firmly held together by Tito until his death in 1980, was beginning to unravel. Following the lead of other ex-Soviet states, Slovenia, Croatia and Macedonia all declared their independence in 1991, leaving only Serbia, Montenegro and Bosnia-Herzegovina in a rump-Yugoslavia.

In 1992 the democratically elected Bosnian government called for an independence referendum. A majority of Bosnians (mostly Bosnian-Croats and Muslims) voted for independence, but most Bosnian Serbs chose to boycott the referendum.

On April 6, 1992 Bosnia-Herzegovina's independence was recognized by the EU countries. On the same day, Karadzic, as the head of the leading Bosnian-Serb party, responded by severing all ties with the Bosnian government in Sarajevo and allying himself with Serbia. The Bosnian-Serb paramilitary forces launched the first attack in what would become the siege of Sarajevo -- which would last 44 months and claim more than 12,000 lives.

In the early stages of the war, Karadzic ensconced himself at the Holiday Inn hotel opposite the parliament building. He divided his time between his political activities and his work at the Nedjo Zec psychiatric clinic at Sarajevo's Kosovo hospital.

In May 1992, Karadzic was voted president of the Serbian Republic of Bosnia-Herzegovina, renamed Republika Srpska a few months later. Together with Serbian president Slobodan Milosevic and the Bosnian-Serb military leader Ratko Mladic, Karadzic is held responsible for the politics of ethnic cleansing in Bosnia in the years that followed.

After the Bosnian Serbs overran the Muslim enclave of Srebrenica in the summer of 1995, killing 8,000 Muslim men in the process, Karadzic and Mladic were indicted by the Yugoslavia Tribunal. The charges included the siege of Sarajevo, taking UN peacekeepers hostage, and war crimes committed in prisoner camps. In Nov. 2005, the charge of genocide in Srebrenica was included.

The Srebrenica massacre increased the pressure on the international community to end the war in Bosnia. At a military airbase near Dayton in the US, diplomat Richard Holbrooke finally got the presidents of Croatia, Serbia and Bosnia to reach a peace agreement in Nov. 1995. Part of the agreement was that Karadzic, who was not at the meeting, the Bosnian Serbs being represented by Milosevic, would disappear from the political scene.

"My father called us into his office late one night," Sonja Karadzic recalled over the phone from Pale, where she still lives. "He said he had made a deal and he wouldn't have to worry about The Hague. It was like a gentlemen's agreement."

Years later, at his first arraignment in The Hague, Karadzic would invoke this deal. But the UN judges decided the agreement, which Holbrooke has denied, was "irrelevant" to the trial. "If I had been negotiating with [former US President] Jimmy Carter," Karadzic said by e-mail, "I would now be working in a clinic in Bosnia."

For months after the Dayton agreement, Karadzic moved freely, without concern. "He would pass the international checkpoints," his daughter Sonja said. "The international observers would greet him and wave to him."

William Stuebner, a former adviser to the tribunal, negotiated with Karadzic in those days about a voluntary surrender. "The last time I spoke with Karadzic was in the spring of 1996," Stuebner told NRC Handelsblad. Karadzic had been biting his nails, he recalled. They talked for two hours. It was not the first time that Karadzic had said the tribunal was biased against the Serbs.

When asked in the e-mail interview if he expected to get a fair trial, Karadzic replied: "I hope it will be fair, but my expectations are low."

Stuebner went on preparing for Karadzic's arrival in The Hague, despite the obvious lack of political motivation in the West to have him arrested by the NATO troops that were now keeping the peace in Bosnia. Only years later did the pressure to arrest Karadzic become high enough for Karadzic to have to go underground.

He doesn't want to say what he did during all those years in hiding, when thousands of NATO soldiers were on the look-out for him, except to say they were looking in the wrong place.

Karadzic had in fact been hiding in plain sight. He took the name Dragan Dabic in 2004, and by the time he was arrested he had become a respected alternative healer in the Serb capital. He had a regular column in the magazine Zdrav Zivor (Healthy Living) and he had made a career for himself at a company making vitamin supplements.

"We are energetic creatures," Dabic would preach. "The energetic processes that determine our bodily functions are caused by the energy of the higher (cosmic energy, prana, mana, organic energy, quantum energy and the Holy Spirit)."

He had told his friend Mina Minic, a fortune teller, that he used to live in New York and had divorced his wife, who had stayed there with their two children. In reality Karadzic's family stayed in Pale, 200 kilometers away, the whole time. Dabic spent a lot of time in Minic's office. Sometimes he would spend the night on a cot there. As Minic recalled in The New York Times, he would always carry "four of five" mobile phones, which would ring constantly. "He was always calling people back. I thought he was a spy."

In the run-up to the 10th anniversary of Srebrenica, the search for Karadzic intensified. Police searched the houses of Karadzic's brothers Luka and Ivan in Belgrade and Obrenovac in Serbia. His son Sasja was held for 10 days because NATO troops in Bosnia suspected him of helping his father. Karadzic's wife made a short, emotional appeal on Serb TV: "I'm begging you with all my heart and all my soul to please surrender." Still there was no word from Karadzic.

Then, on July 18, 2008 around 9.30 p.m., Dabic/Karadzic got on a bus for a two-week holiday at a health resort outside Belgrade. At an intermediary stop seven men got on the bus. "Three tough guys in civilian clothes grabbed him," eyewitnesses told Serb TV. "Be quiet and come with us," one of them told Karadzic.

Sonja Karadzic had not been in contact with her father for five years at that point. She and her mother had already started legal procedures to have him declared officially dead. When Sonja heard the official news of her father's arrest three days later she immediately called her mother. "Daddy is alive and he's been arrested," she said.

Questions and answers in the e-mail interview with Karadzic were subject to approval by the Tribunal Registry under its media rules.
Mehr lesen über
Srebrenica War Crimes