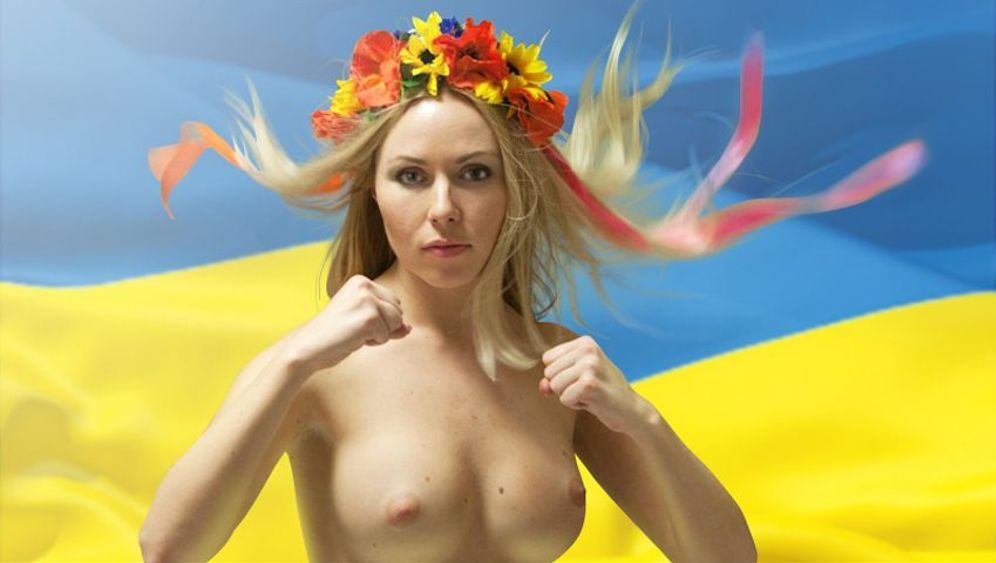 The Rock is New Zealand's most beloved radio station, although not necessarily the country's most sophisticated. "Music is the ONLY thing we take seriously," is the station's fitting motto. Recently, The Rock offered its male listeners the chance to win a trip to an exotic vacation spot in eastern Ukraine. In addition to 12 paid nights, the prize includes 2,000 New Zealand dollars (€1,000) in pocket money. The grand prize, however, has to be chosen on location by the winner himself: a wife.

"Win a trip to beautiful Ukraine," announces the contest title, "And Meet Eastern European Hot Lady Who Maybe One Day You Marry."

The contest logo shows the pixelated face of a bleach-blonde beauty. Her hair is adorned by a red headband, with a gift tag hanging from it as if she were a Christmas present.

A beefy man in his mid-30s, Greg, won the trip. In a questionaire about himself, Greg said that he is looking for a partner, "someone to share everything with, and enjoy intimacy with." He also revealed that he showers daily.

The New Zealander is set to fly via Moscow to Donetsk, the regional capital of eastern Ukraine. Coal mines and heavy industry have made some of the region's oligarchs very wealthy, but the majority of the population lives in poverty. Many women here dream of a better life in Kiev or the West, and many fall prey to false promises and end up as prostitutes in brothels.

Some travel agencies offer "Romantic Tours," in German and English, of eastern Ukraine. In Kiev, meanwhile, pimps will call the hotel rooms of foreign guests and offer to sell them "a good time with a girl." According to a survey, 70 percent of students in the capital have been approached at least one time by a foreigner offering them money for sex.

Inna gets dolled up to greet Greg, the bachelor from New Zealand. The blonde slips into her crocodile-skin high heels and shiny leather pants, and places a crown of flowers in her hair. Waiting in the arrival hall at Donetsk airport, she has a sign in hand with "Greg, come here" scrawled across it.

But it's unlikely Greg would be able to overlook her: Her breasts are bare.

Inna Shevchenko, 20, a student from Kiev, is a "Topless Fighter," as activists with the women's rights group Femen call themselves. For two years, the organization has been fighting against sex tourism and prostitution in Ukraine, a country that even Google automatically associates with "dating agencies" and "women." The advertisements to the right of a Google search for "Ukraine" are for "Single Ukrainian Ladies," "Women From Ukraine," or "Partner Search Ukraine." Although the group has only a few dozen activists like Inna and around 300 supporters, the topless protests have established a global reputation for Femen.

One year ago, half-naked activists warning against the "Rape of Democracy" stormed the polling station where presidential candidate Viktor Yanukovich was casting his vote. After winning, Yanukovich curbed freedom of speech and the press, and even imprisoned members of his opposition.

Since Yanukovich came to office, the SBU, Ukraine's top secret service, has attempted to intimidate the Femen activists. They claim that SBU officials even threatened to "break the legs" of the group's leader if she didn't cease her attacks on the government.

"The state fears Femen because they are increasingly targeting Yanukovich's government," said Taras Chornovil, an independent member of the Ukrainian national parliament.

"We understand that the root causes for many of the problems in Ukraine run very deep," says Victor, one of Femen's few male members. "That's why we take the concept of prostitution one step further: The entire Ukraine is a brothel."

The heart of Femen beats in a dimly lit cellar bar in the center of Kiev. The Café Cupidon is named for the Roman god of desire, son of the goddess of love, Venus, and the god of war, Mars. It's a fitting headquarters for the feminist guerrillas: It provides free Internet access, a mailbox for Femen and a 10 percent discount on coffee for members.

Anna Hutsol, a petite figure with red-dyed hair, is the head of the movement. The 26-year-old economist sits in front of her laptop, directing her topless fighters with the help of two mobile phones. She has positioned Olga, a fellow fighter, in front of the Prosecutor General's Office, where she is awaiting Leonid Kuchma. The Ukrainian courts have opened a case against the former president for his alleged involvement in the death of journalist Heorhiy Gongadze. Gongadze's decapitated body was found in the woods outside Kiev in November 2000. Kuchma has long been suspected of having given instructions for the murder, and he is now expected to be questioned in the context of investigation into the slaying.

Femen activist Olga bares her breasts for the lenses of the dozens of photographers who have gathered to see Kuchma. She holds up a poster: "Walk away, Lyonya, I will shield you,'" alluding to the fears that the Yanukovich-controlled courts only opened the case for PR purposes. "It's a farce: the statute of limitations has expired," Hutsol, sitting in Cupidon says. "In truth, they just want to close the file."

'We Want a Real Women's Revolution'

Since Yanukovich took over the helm, the Ukrainian security forces have become increasingly interested in Femen. In summer 2010, men from the Ukrainian intelligence service SBU forced their way into Anna's apartment at night. They held "preventative talks" and threatened to "break the arms and legs" of the Femen chief.

The leaders of a Kiev university recently sent summonses to several students because they were engaged in Femen activities. Then, in the rector's office, SBU staff interrogated them. The men asked students "where the money for your campaign comes from" and "for whom you work." Rumors about Femen have long been circulating in Kiev's government district. One day, the word is that the organization was commissioned by the ex-prime minister and opposition leader Yulia Tymoshenko; the next, it's Russian Prime Minister Vladimir Putin himself who is supposedly supporting the project in order to ridicule Ukrainian policy.

In truth, Femen survives on modest contributions from a handful of donors. German Helmut Josef Geier, better known as DJ Hell, supports the group. They also sell fan items on the Internet and auction small pieces of art. To produce the latter, the activists first paint their breasts yellow and blue, and then they make prints on cloth or canvas. What would feminists, like Germany's Alice Schwarzer or America's Gloria Steinem, have to say about that?

Old school feminists find the topless troops strange. "They dress like prostitutes," criticizes gender researcher Maria Dmitrieva wrote of Femen in a Russian magazine. "The display of bare breasts, with or without cause, is certainly not conducive to social discourse."

"Yes," sighs Anna Hutsol im Café Cupidon. "We're different from classic feminists. In order to gain a voice, they had to become like men. But we want a real women's revolution. Our naked protests are part of the fight for women's liberation. We have the right to use our bodies as weapons. It was men who made breasts into a secret."

"I think men like women's breasts," says activist Inna Shevchenko, "but they don't like it when a woman has something to say as well." It's not just other feminists who have expressed concerns about Femen's exhibitionism. Facebook blocked the Femen page because officials there suspected it was pornographic. Inna's mother no longer wants to have anything to do with her -- she recently told her not to call her ever again.

On the anniversary of the Chernobyl disaster in late April, a photographer snapped a shot of the Femen activists, wearing only boots, underwear and gas masks, in the Chernobyl Dead Zone. The photos are supposed to appear in the Italian edition of Gentlemen's Quarterly, a men's magazine that, at least in Italy, likes to splash its pages with naked photos and confessions from female celebrities.

For Femen, it's not an issue: "We want to show the entire world our neo-feminism," says Anna, as she makes travel plans on her PC. In the coming months, she wants to travel to Switzerland and Italy to establish contacts. She raises her mug in a toast: "To the Femen in all countries," she says ceremonially. "To our plans to conquer the entire world."