When it came to deep male bonding, the two were bosom buddies. Moammar Gadhafi, the self-named "Revolutionary Leader" of a North African country rich in oil and gas, even invited his "amico" from Rome, Prime Minster Silvio Berlusconi, to his harem, where the Italian leader learned about "bunga bunga" sex games. Berlusconi reciprocated in his own way. Last spring, a guest at a meeting of Arab leaders in Sirte, Libya, Berlusconi kissed the Libyan leader on the hand to greet him, a gesture he usually reserves for the pope.

Berlusconi long remained loyal to his buddy from across the Mediterranean. Just last week, as Gadhafi had already begun to gun down and bomb Libyans protesting against his regime, Berlusconi refused to utter a single word of criticism, saying instead that he preferred not to "disturb" Gadhafi.

As recently as Monday, Italy blocked a European Union resolution condemning the killing. Only after Washington exerted massive pressure -- including several phone calls by Secretary of State Hillary Clinton to Rome -- did Berlusconi cave in. When he finally did, though, he did so completely. Italian daily La Republicca quoted him as saying that Gadhafi was "crazy," and that he might even resort to firing rockets at Italy.

But even if the Libyan leader doesn't live up to such dire predictions, the damage to Italy is already immense. The Italian business sector is particularly concerned. Libya, after all, is far more to Italy than a mere raw materials supplier and important importer of Italian products. It also has stakes in many Italian firms. With a 7.2 percent holding, the desert nation is the most powerful shareholder in Unicredit, Italy's largest bank. Correspondingly, the bank's vice president is a Libyan, Farhat Bengdara, who is also the head of the central bank in Tripoli. His whereabouts are unknown at the moment. Unicredit President Dieter Rampl says they have no contact with Bengdara. 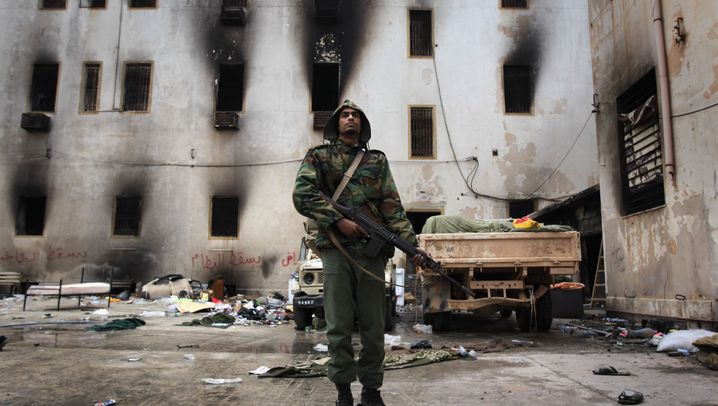 Italian technology and defense industry firm Finmeccanica is also part owned by the Libyans, as is energy utility giant Eni. The Libyans even own 7 percent of Juventus Turin, one of Italy's most popular football clubs. At first glance, the holdings seem small -- only 2 percent at Finmeccanica and hardly more at Eni. But the importance lays in the mutual dependency behind those holdings. Take Eni, for example, which is known across Europe for its Agip chain of gas stations. The former state-owned enterprise has invested more than $50 billion in the exploration for and extraction of oil and gas in Libya. Further billions in investments by the corporation are expected to follow in the next several years.

"The fate of Libya and Eni are tied," Rome-based external trade expert Nicolo Sartori said. But it is possible events will impact more than just the fate of Eni. One-quarter of Italy's crude oil needs and 10 percent of its gas imports come from Libya. The Greenstream gas pipeline running from Libya to Sicily, one of the most important gas mains for all of Europe, has been empty for several days.

In the short term, that won't be a problem, Italian importers are saying. But what happens if the unrest persists? A large portion of Italy's electricity comes from power plants fired by natural gas. With oil exports from Libya likewise suspended for the moment, Italian energy prices -- already among the highest in Europe -- are heading higher still.

Berlusconi had barely returned to the office of prime minister in 2008 when he donated €5 billion to his counterpart in Tripoli after agreeing to a friendship treaty with Libya. The money, conceived of as compensation for Italy's former colonial rule of Libya, was meant to be invested in roadways and railway infrastructure. But Gadhafi also pledged that the money would flow back to Italy in the form of contracts for Italian construction companies and defense firms. That was the way things often worked between the countries. Each country invested heavily in the other and got as much out of its partner as it could.

Long before Berlusconi's time, in 1976, Gadhafi even rescued carmaker FIAT, which had been deeply and adversely affected by the oil crisis. For a period of 10 years, he owned 15 percent of the company before the Italians pressured him to sell his shares. After the bombing of a Pan Am jet over Lockerbie, Scotland, people in many parts of the world considered Gadhafi to be a terrorist -- a man whose reputation was clearly bad for car sales. But Gadhafi wasn't particularly offended when the Italians pushed him out.

Strong relations between Libya and Italy did not escape the attention of the US. In embassy dispatches, US diplomats kept Washington up to speed on the alliance. According to the cables, part of the cache of secret diplomatic communications released late last year by WikiLeaks, Gadhafi was not always the easiest business partner to have.

In a cable from 2006, US diplomats report that officials from SACE, Italy's export insurance company, were concerned about Gadhafi's "erratic economic policies" and myriad bureaucratic hurdles. "The Libyan leader is notoriously capricious and prone to sudden reversals," the diplomats write in summarizing the concerns. Still, the diplomats write, "Italy's dependence on Libyan oil and gas ensures that business with Libya will continue, regardless of bureaucratic problems or other impediments."

Just how tight the Libyan dictator's grip on the Italian government was becomes clear from a 2009 dispatch. Gadhafi visited Rome that year for the first time since he took over power in Libya in 1969 -- and his entourage was immense: four airplanes and 446 visas, the Italians told US diplomats. The offices of Berlusconi and Gadhafi prepared the visit in direct talks.

But on the day of the visit, Berlusconi had terrible back pains, the US diplomats cabled to Washington. Gadhafi's planes were already on the approach to Rome when he found out that Berlusconi was not going to be able to receive him at the airport. He threatened to turn back to Tripoli. In response, Berlusconi received a cortizone injection and made his way to the airport -- though he almost collapsed from the pain, the cable reports.

It remained a very long and intensive friendship. Now, it finally appears to have run its course. During a telephone conversation with Berlusconi this week, Gadhafi grew angry and claimed that insurgents had obtained Italian weapons. Berlusconi denied complicity. Nevertheless, the Italian leader still fears his former buddy will attempt revenge. Around 10,000 Italians live in Libya and only a few have any real desire to leave. In Rome, concerns are growing that they could quickly become the targets of a vengeful despot.

Fears also persist that the Gadhafi regime could open the gates and allow an exodus of hundreds of thousands of refugees across the Mediterranean to Italy.

Industrial leaders in Italy have an altogether different concern. If the tyrant and his clique are driven out and the country changes significantly, will once tight and lucrative economic ties enjoyed under Gadhafi's reign become a millstone around their necks? A resentful new Libya might withdraw its investments in Italy and boycott Italian products. Should that happen, Italy could be staring down the barrel of a deep economic crisis. 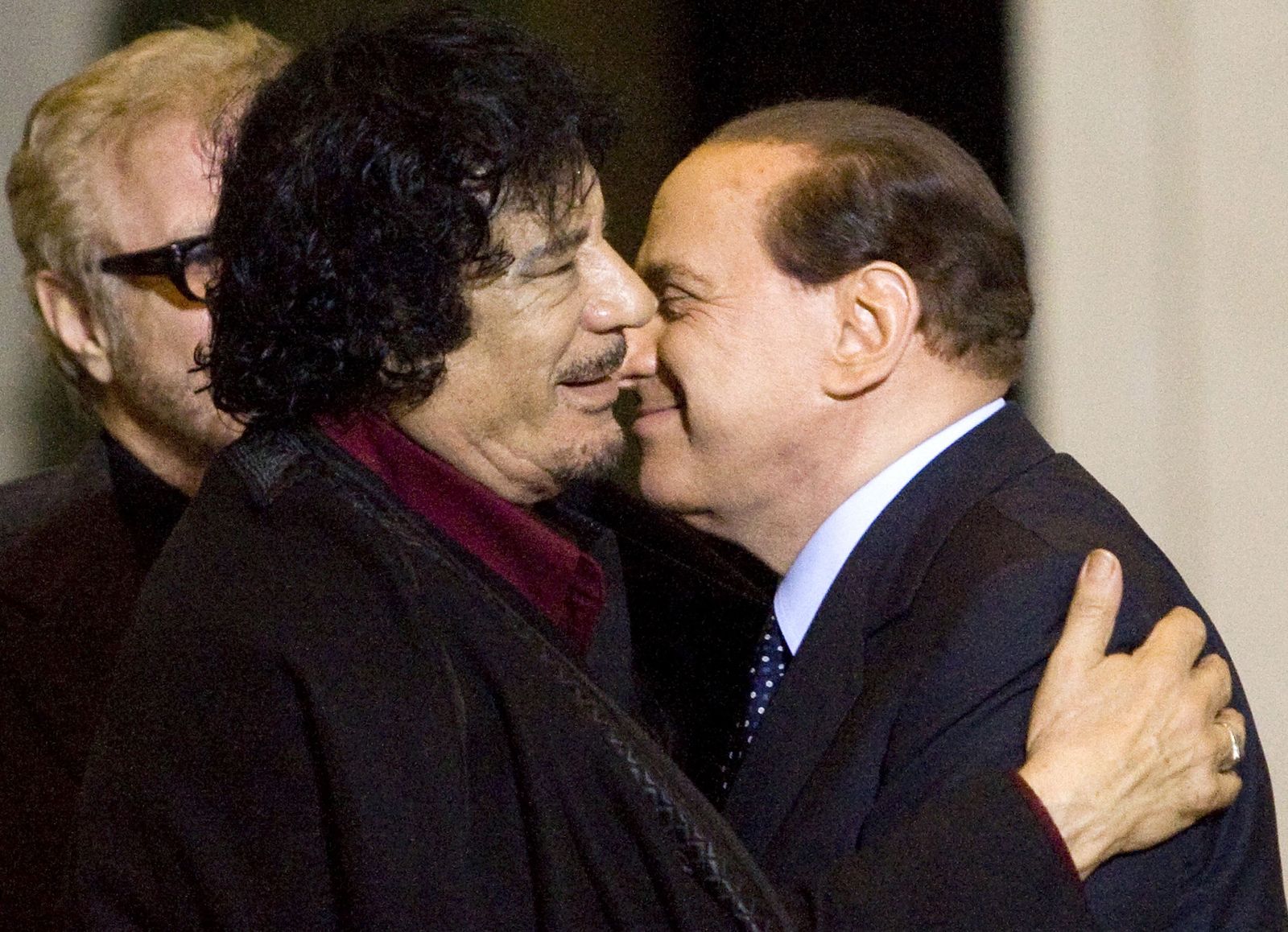