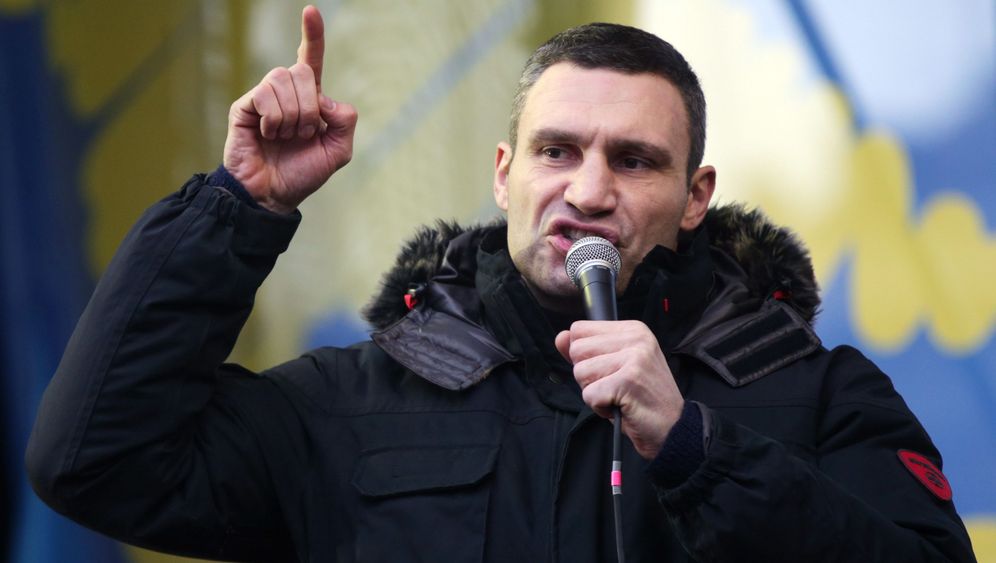 Every sentence German Foreign Minister Guido Westerwelle utters in the lobby of Kiev's five-star Hyatt Hotel betrays a sense of helplessness. He says that the "gateway to Europe is open" for the country, that there are "shared European values," that Germans are "not indifferent to Ukraine," and that it is in fact "culturally and historically" part of the old continent. Then he says "thank you so much" to the Ukrainians and walks out into the street.

It is already dark as Westerwelle walks from St. Michael's Monastery down to the Maidan Nezalezhnosti, or Independence Square. He is flanked by Vitali Klitschko of the Udar opposition party on the right and Arseniy Yatsenyuk on the left, a former foreign minister and current acting head of the Fatherland Party. He is the party's acting leader because its official leader, Yulia Tymoshenko, is now in prison. Klitschko's brother Vladimir is also there. "It was a good conversation with Westerwelle," he says. "But what's it supposed to achieve?"

"Klitschko! Klitschko!" people on the sidewalks shout to the two boxing greats, but they don't recognize the shorter man with his hands in the pockets of his black overcoat. "I was here recently, and everything still seemed okay," Westerwelle says to Vitali Klitschko. "This has taken us by surprise." Truer words were hardly spoken. At that moment, bodyguards and photographers push the German minister into the crowd on the square in downtown Kiev, where history is currently being written.

It is the fifth day of protests against President Viktor Yanukovych. They began when the president returned from the European Union summit in the Lithuanian capital of Vilnius without having signed a completed association agreement with the EU. Instead, Yanukovych announced, Ukraine planned to shift its focus toward Russia once again. Protesters, who felt that they had been lied to about their future, soon began appearing on the Maidan, a square they have renamed the "Euro Maidan."

Five days proved enough time for the spontaneous uprising to establish itself. Portable toilets are lined up neatly in front of the occupied city administration building, barricades have been built, opposition lawmakers meet with citizens in tents, and activists are collecting signatures to demand the resignation of Yanukovych and his government.

There are now about 20,000 protesters in the square, not hundreds of thousands. It's a workday. They have wrapped the blue-and-yellow Ukrainian flag around their shoulders. It's cold, and medical personnel in the ambulances parked along the side of the square have already been treating people for frostbitten toes. A man from Lviv, a city in western Ukraine, is selling Indian cough syrup from boxes. "I paid for the stock with my own money," he says. "We have to persevere." The pungent smell of wood fires and field kitchens hangs over the square -- the smell of all post-Soviet revolutions.

The protesters are in good spirits, shouting "Long Live Ukraine!" and "To Europe Without Yanukovych!" But it's still a long way from here to Europe. Prime Minister Mykola Azarov has just declared that he views many of the protesters on the Maidan as "Nazis, extremists and criminals."

The Ukrainian leadership has sharpened its tone, a sign that Yanukovych and his supporters already consider themselves victors. The police announced that they are giving the demonstrators until Tuesday to end their blockade of government buildings. "We're strong enough to defend ourselves," the prime minister noted.

Azarov is currently doing the dirty work, while Yanukovych is on a state visit to China. The premier has resorted to threats and bluffs. He recently told a group of foreign ambassadors that the Kiev police chief had resigned over the forcible clearing of the Maidan two weekends ago. The interior ministry went on to deny any such resignation ever happened.

Yanukovych condemned the brutal police actions, in which a "Berkut" special-forces unit attacked protesters still on the square early Sunday morning with clubs. But the president neither took responsibility nor apologized for the incident. And now he is feeling more secure than in the days leading up to it.

'I Have a Very Bad Feeling'

For a brief period of time, panic erupted within the government. No one there had expected 200,000 people to take to the streets to protest Kiev turning down the EU agreement. The president's chief of staff submitted his resignation, and there were rumors floating around in Yanukovych's party that 20 lawmakers planned to defect to the opposition. But then the government quickly recognized and made use of the opposition's weaknesses.

"It was a mistake to try to bring down the government with a vote of no confidence in the parliament," says Mustafa Nayem. "At that moment, the other side understood that the people behind Klitschko and Yatsenyuk don't want a war. So they quickly regained control over their own party." The opposition failed to achieve the 195 votes it had expected.

Nayem is a Ukrainian with Afghan roots and one of the country's most popular TV hosts. He and seven other well-known journalists founded Hromadske.tv, on online TV station that now reports live from the scenes of unrest.

"It's the first time we Ukrainians are demonstrating for something -- namely closer ties with the EU -- and not against something," says Nayem. "But I have a very bad feeling. The opposition has set the bar extremely high, and now it's become a hostage of the street."

Then Nayem, a 32-year-old with a shaved head and a goatee, talks about how at a recent meeting with Klitschko and Yatsenyuk, both men said that they themselves didn't believe that hundreds of thousands would take to the streets again after the failed Orange Revolution. "And now here they are, afraid of the demonstrators and unwilling to take responsibility. Instead of burning all their bridges, they've gone to the parliament." According to Nayem, the Yanukovych camp quickly recognized that the opposition had no idea what to do next. "Replacing the old government through legal means is not possible until February, because the no-confidence vote couldn't be repeated until then. All we have left is the street."

Klitschko and his allies aren't letting on that they are being outflanked in the new struggle for Ukraine. The louder the people on the Maidan call for a plan for the coming days, the more aggressive do the opposition leaders become. At the "National Resistance Headquarters" in a union hall, they announced their intention to expand the resistance movement to eastern and southern Ukraine, where most of Yanukovych's supporters live. Now they also want to blockade the interior ministry, the courts and the country's security council. "We gave Yanukovych two more days. If the government still doesn't resign by then, we will also cripple the remaining government bodies," says a spokesman for Tymoshenko's party.

The question now is how many people will be left on the Maidan in the second week of the revolution. "Many of the opposition's demands are unrealistic," says Nayem. "Its leaders have no political experience, and they mistrust each other. Klitschko depends entirely on his popularity and the power of his fists, but he lacks the drive and determination of someone like Yulia Tymoshenko."

Last Friday, when Yanukovych was returning from his trip to China and had taken a detour to Sochi to meet with Russian President Vladimir Putin, protesters on the Maidan seemed clueless and unsure how to proceed. Even the newspapers sympathetic with the opposition are now writing that it made a mistake when it failed to agree on a single leader from the start. This has given the government the opportunity to claim that there is no one on the protesters' side with whom to negotiate. Besides, the government has stated that it will not so much as speak with the opposition as long as it continues to issue ultimatums.

The uprising will probably end with a bogus compromise. Yanukovych could invite opposition members to a round table brokered by the European Council. But he has already made it clear that he will only take this step once the protesters have stopped their blockade of government buildings. Yanukovych insists the opposition send home all of its supporters -- its strongest weapon. 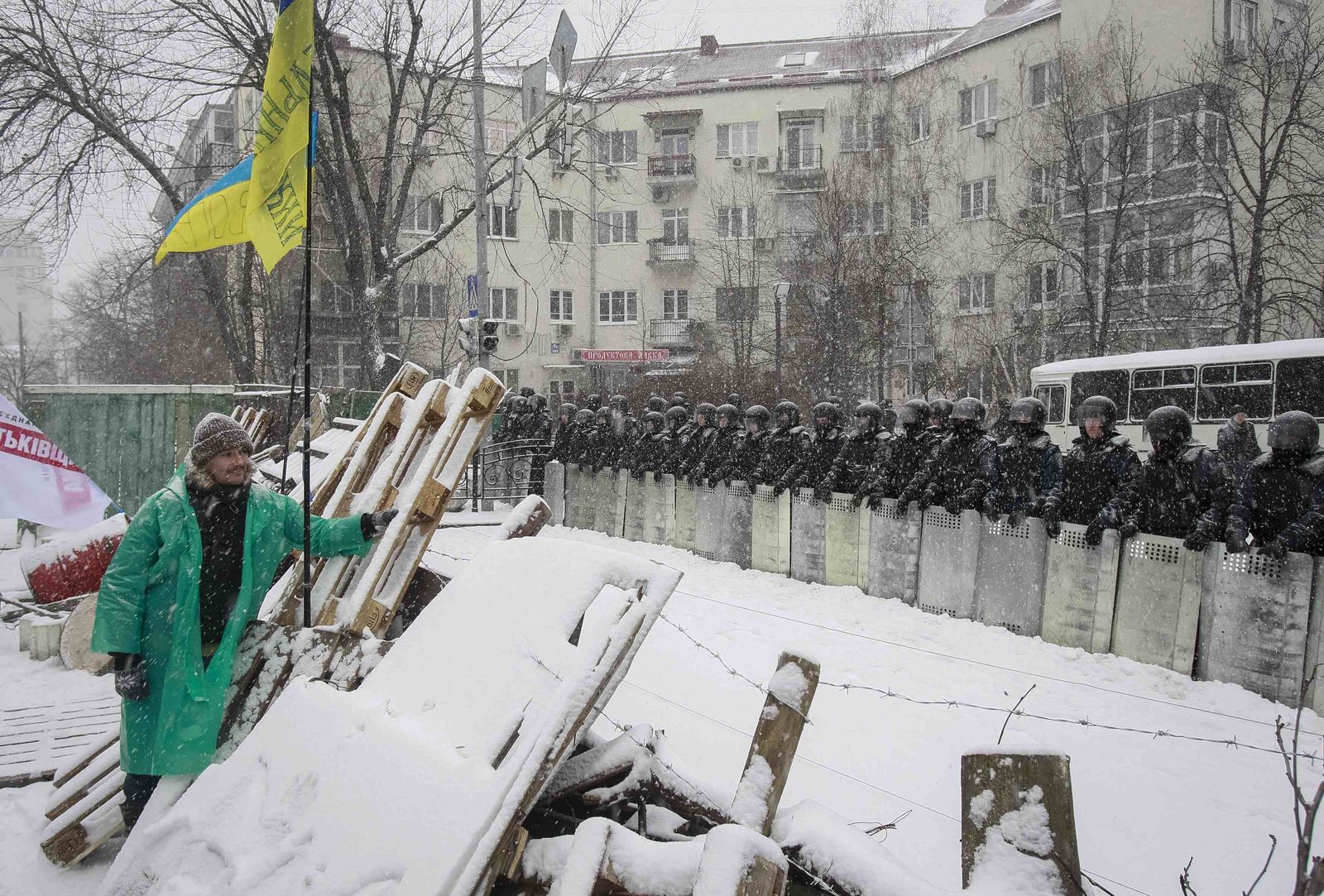 Interior ministry personnel stood guard opposite a barricade erected by supporters of EU integration as snow falls around them.