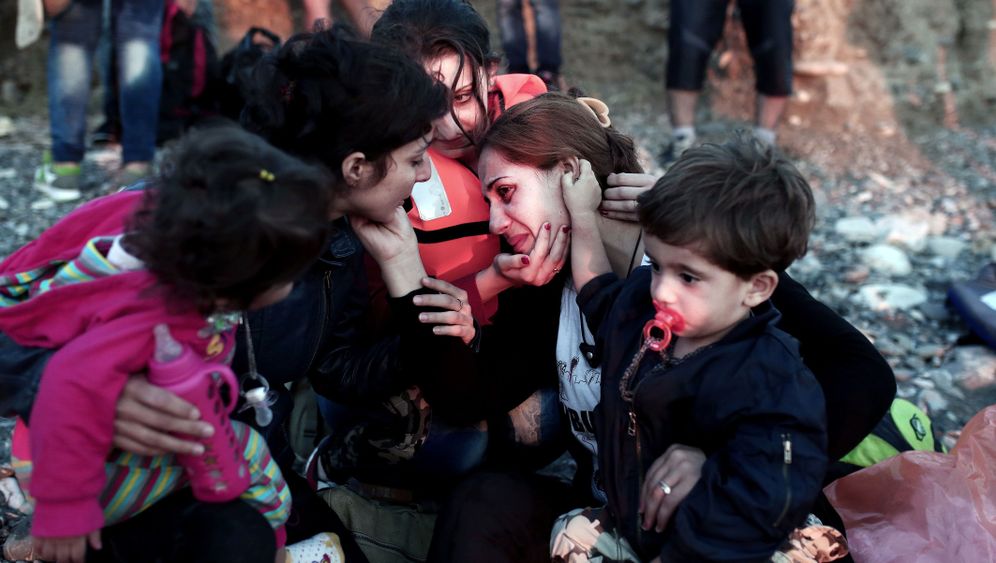 Along the beach promenade on the island of Kos, a small settlement of tents has sprung up. Colorful clothing flaps in the breeze, hanging from a palm tree after having been washed in the sea. In the shade beneath the tree sits a 14-person family from the war-torn Syrian city of Aleppo. Children, the 65-year-old grandmother, the pregnant aunt: They're all there.

The women don't want to give their names or be photographed. But they do have something they want to share. "Will you just look at that!" says the grandmother, pointing to the broad, black overcoat that covers her body. It is covered in light-colored dust -- the product of having to spend the night outside, sleeping on a patch of dried-out grass.

The family's home back in Aleppo was destroyed just a few days ago after fighting in their neighborhood flared up again. Now, they are camped under a palm tree on a Greek vacation island with nothing to eat or drink. There is no toilet nearby, much less bathing facilities.

The grandmother once again points accusingly at the spot on her overcoat. Up until 10 hours ago, before her first night under the stars on the island of Kos, she was a proud woman. After leaving Aleppo with her children and grandchildren, she found hotel rooms in Turkey for the family and paid traffickers for the trip across the small strip of the Aegean Sea that separates Turkey's west coast from Greece's easternmost islands. Once they arrived, the family did what they could to find a hotel room on Kos, but nobody wanted to rent a room to them.

Suddenly, on the Greek island, the 65-year-old matron is someone who is unwelcome in the homes of respectable people, someone who the police drive out of the city center at night, someone who is beginning to smell due to a lack of facilities to wash. Someone whose clothes are dirty. "Are we really in Europe here?" she asks. She had expected respect and human dignity.

Like other Greek islands near the Turkish coastline, Kos has for months been experiencing a huge number of new arrivals. Around 600 people land on the shores of the island every day, says the Greek coast guard, in addition to those arriving on Chios, Samos, Lesbos and other nearby islands. The European Union's border agency, Frontex, announced last week that nearly 50,000 migrants arrived in Greece in July. That would be an enormous challenge for any country. But one gets the impression that Greece isn't even trying.

No Shelter, No Sanitation

On Kos, there isn't a single official reception camp for refugees, and this despite the fact that the current wave of arrivals has already been going on for months now. Local authorities haven't made shelter, or even sanitation facilities, available to the newcomers and the refugees are forced to buy food and drink themselves at the local supermarkets.

Earlier this week, up to 2,500 refugees were even locked into the Kos stadium for almost 24 hours, with some forced to stay there for three days, many with no access to shade, much less food and water. They had to climb over barricades just so they could go out and buy sustenance. Nobody felt it necessary to tell them how long they would be held there and, when the situation started becoming uneasy, Greek police waded in with batons and fire extinguishers.

In addition to those, like the family from Aleppo, who are camping out along the shore, many have taken up residence in an unfurnished building on the edge of town that used to be the Captain Elias Hotel. The owner went broke years ago and the structure has been empty since then. Months ago, it was said that authorities intended to turn the vacant hotel into a refugee shelter, but since then, nothing has happened.

Nevertheless, the building has become an unofficial migrant shelter in the meantime, providing a temporary home to hundreds of people from across the world. But there is nobody in charge. The aid organization Doctors Without Borders has erected six portable toilets in the yard outside and doctors affiliated with the group regularly visit the former hotel. But otherwise, the people inside are left to their own devices.

Losing Their Belief in Europe

And the conditions are terrible. There is no electricity and overcrowding has forced many to live in makeshift huts built out of palm fronds in the yard outside. In the evenings, they build open fires to cook rice procured from the local supermarket. Many at the Captain Elias have lost their belief in Europe.

The hotel is also symptomatic of a new challenge facing Kos and its refugees. Migrants are people too and, like many of the Greeks living on Kos, they too have prejudices. There isn't a single Syrian living in the Captain Elias, for example, despite the fact that Syrians represent the biggest group on the island. They prefer to sleep outdoors along the beachfront promenade rather than to squeeze in with their wives and children among all the young men from Pakistan, Afghanistan or Mali. Until recently, it was mostly young men who were making the dangerous journey across the Mediterranean. But the suffering has become so great in Syria that now, entire families -- babies, young women, pregnant women, the elderly -- are making the journey. And they need sanitary facilities. Washing themselves bare-chested in the sea or with a hose like the men do is not an option for them.

The one thing that does appear to be working on the island of Kos is Greek bureaucracy. Every new arrival has to report to the coast guard, which only works between midnight and 6 a.m., largely, some people believe, so that the tourists aren't confronted with the process. After that, migrants must register with the police. That can take some time, due primarily to a shortage of personnel on the island. But Kos has increased the speed of registration in recent days and the long lines have shrunk considerably as a result. Refugees from Africa, however, complain that they are systematically disadvantaged, claiming that they often must wait weeks to register whereas those from Syria or Iraq are registered within days. "They want to keep us blacks out," says one young man from Mali.

'We Want a Better Life'

Still, it looks as though local authorities on Kos want the refugees to leave the island as quickly as possible. They have refrained from building a reception camp, but those who have been registered are allowed to take a ferry to the mainland and, from there, continue onwards to Western Europe via the Balkans. They must pay for the ferry to Athens themselves -- €40 to €50 per person -- and Greek shipping lines don't deny that it's a good business for them. The ferries are always sold out.

On Friday, a large ferry arrived at Kos to provide temporary shelter for new arrivals, but only for the Syrians, officials said. Others will still be forced to camp in the open or endure the miserable conditions in the Captain Elias Hotel. The mayor of Kos, Giorgis Kyritsis says the ship will only remain for two weeks. It will not, he insists, become a permanent refugee camp.

But many of the newcomers will still be forced to make the best of their situation. Like the group of four friends from Baghdad, between 24 and 30 years old. Two of them say they served in the Iraqi military, but deserted because they wanted nothing to do with the atrocities committed as part of the war against Islamic State. The other two are engineers. "We couldn't sleep at night," one of the engineers says. "We were constantly afraid of the militias. They kill people and throw them onto the garbage piles. We want a better life."

In shorts and flip-flops, the friends from Baghdad stroll down the Kos promenade. They have lived in the park for the last four days, but now finally have their police registration. But the next ferry to the mainland comes only on Saturday, so they have to wait. "We're going to take a swim in the sea. We know that you shouldn't pour shampoo into the water. But when we have nowhere else to wash ourselves, what are we supposed to do?"