The three German intelligence agents detained in Kosovo on suspicion of terrorism may return to Germany this week, according to the Süddeutsche Zeitung. The paper reports that the Kosovo and German governments -- eager to save face as a "spy" scandal spins out of control -- have found a solution to a growing diplomatic problem. 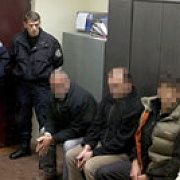 If Kosovo's criminal-justice system hands the suspects and any relevant evidence over to German authorities for processing, the paper reported, the men could fly home this week.

The three suspects reportedly work for Germany's foreign intelligence service, the Bundesnachrichtendienst or BND. They were detained for 30 days by a judge after questioning on Saturday in connection with an explosive device tossed on November 14 at the International Civilian Office, where the European Union maintains a presence in Kosovo's capital. The explosion shattered some windows but hurt no one.

Kosovo police claimed that one of the Germans -- named as Andreas J. by the Süddeutsche Zeitung -- had been caught on video tossing the device. The German government maintained that the video, which has not been released, was blurry and inconclusive, and that J. came to photograph and inspect the scene four hours after the crime.

Kosovo authorities said they found it suspicious when J. tried to destroy a SIM card in his mobile phone just before his arrest. The German government has maintained all along that the terrorism charges were "absurd," and that Germany had no motive to attack or threaten an EU building.