Calm in the gas dispute between Russia and Ukraine lasted for only a few hours on Tuesday. After six days of blocking supplies, Russia began pumping natural gas through Ukraine at 8 a.m., bound for European Union customers.

But before the supplies could even get to the EU, the pipelines were reportedly shut down again. European Union observers in place to monitor gas flows said they had measured "little or no gas" in Ukraine. They said it was too early to draw conclusions from the observation, but the situation "is obviously very serious and must be improved quickly."

Kiev soon admitted that it had, in fact, blocked the transit of Russian gas through its territory, citing "unacceptable conditions for transit" that had been imposed by Gazprom, a spokesperson for Ukraine's state-owned Naftogaz, which manages the pipelines, told the French news agency AFP.

Gazprom deputy chief Alexander Medvedev called the incident a "violation" of the deal that had been reached between Moscow, Kiev and the European Union.

Gazprom officials also blamed the United States for the current state of the gas dispute with Ukraine, claiming that the US government was steering Kiev's negotiations. The company claimed that Ukraine was stealing gas despite the presence of EU monitors and that it could, therefore, not provide supplies to Europe. 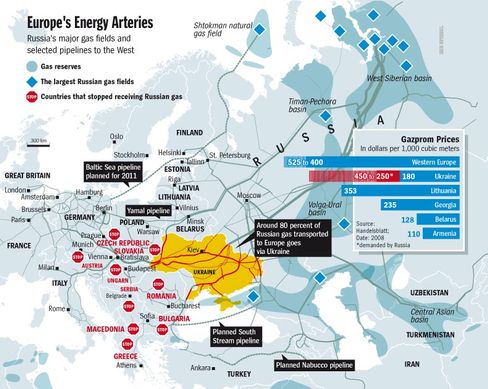 EU officials had no initial comment on the renewed gas stoppage on Tuesday. The European Union had been hoping to put the crisis behind it quickly, after bearing the brunt of the dispute between Kiev and Moscow in recent days. A handful of EU member states, led by Bulgaria, are massively dependent on Russian energy supplies. According to newspaper reports, the six-day energy outage caused by the gas dispute led to an estimated €35 million ($46.3 million) in losses for industry. Around 80 percent of the natural gas imported by the EU from Russia is delivered via Ukraine pipelines.

On Monday, the energy ministers of the EU member states met to discuss the crisis. According to EU Energy Commissioner Andris Piebalgs, Europe is seeking ways to make itself less dependent on Russian gas. He said Europeans needed to diversify their sources and delivery routes for energy supplies. In order to defend itself against future crises, he said the EU needed to increase the number of storage facilities for gas reserves and to have a better network of pipelines.

The core conflict behind Europe's gas shortages this week -- a price and past-due billing dispute between Kiev and Moscow -- continues to simmer. The unprecedented freeze on gas deliveries was prompted by the ongoing dispute between Russia and Ukraine over gas pricing and the lucrative transit fees paid to Kiev for gas transported across its pipelines. Ukraine has been hit severely by the economic crisis, but Moscow is still demanding a price of $400 per 1,000 cubic meters of gas. Up until now, Kiev has paid $179.50. In exchange, Ukraine wants Russia to pay higher transit fees for the gas traveling through its country.

No end to the dispute is currently in sight. Russian President Dmitry Medvedev has only reiterated that Moscow would like to meet Kiev at the half-way point in pricing negotiations. One proposal currently being discussed is an EU loan to Ukraine that could also be partially backed by Russia. Russian Prime Minister Vladimir Putin has also stated that Moscow is interested in taking partial ownership of the Ukrainian pipeline network.

Meanwhile, bickering has already begun over the duration of an EU-led monitoring mission in Ukraine. Gazprom officials would like to see ongoing monitoring of gas deliveries through Ukrainian pipelines to Europe, but Ukraine would like to limit the operation to one month.

Putin made the EU monitoring mission a precondition for resuming gas deliveries. Observers still hadn't been dispatched to several important measuring stations as of Monday. But Russian President Medvedev said airplanes had been made available by Moscow to fly inspectors to those sites.

Negotiations surrounding the monitoring agreement were tense and collapsed several times before it was finally signed on Monday. An initial agreement collapsed after Ukraine added handwritten notes to the contract claiming that Kiev was a reliable transit partner, that it hadn't stolen any gas and that it had no outstanding debt to Russia gas delivered in 2008. Medvedev said the additions were false and declared the deal null and void. Throughout the dispute, Russia has accused its neighboring country of siphoning off and "stealing" gas intended for Europe.

After eliminating the notes and signing the agreement for a second time, Ukraine bizarrely accused Russia and Gazprom of not even having enough gas to supply to its European customers and that, as a consequence, it would take even longer to bring an end to the crisis.

Meanwhile, Slovakian Prime Minister Robert Fico has said that his country will not seek to resume operations of its controversial Bohunice nuclear reactor. Slovakia, he said, "would suspend all preparations for a resumption of service" if Russia resumed delivery of gas on Tuesday as it had promised, Fico told Austrian Chancellor Werner Faymann on Monday afternoon. The EU had made the closure of Bohunice, a Soviet-era reactor considered dangerous by most Western European countries, a precondition for Slovakia's membership in the European Union in 2004. Facing a massive energy shortfall as a result of the cut in Russian gas deliveries, Slovakia in recent days has threatened to put the reactor, which only suspended operation in December, back only, prompting the vociferous protest of neighboring Austria.