There are two types of European state visitors in the United States capital. One seeks to underscore his or her closeness to Washington. The other likes to emphasize how independent Europe really is. But French President Nicolas Sarkozy, who is visiting American Senators and US President Barack Obama, would like to be both at the same time.

And that's his problem.

Of course Sarkozy -- who loves Elvis Presley, takes vacation in Maine and has long carried the nickname "L'Américain" in France -- wants to maintain his image as a friend of America. Members of his entourage have pointed out that after his working meeting with the president on Tuesday he has also been invited to a dinner in the Obama's private residence in the White House. It will be the world's most exclusive guest list, French diplomats are proudly stating: just Sarkozy with his wife Carla Bruni and the Obamas.

But Sarkozy also wants to remind the Americans that, as a European, he can defy them. In a speech given in New York on Monday, the Frenchman repeated his demand for better regulation of the global economy. "We can no longer accept a capitalist system without rules or order," Sarkozy said. "The world economic regulations cannot go on as they are," Sarkozy said. "A system in which the most money is earned through speculating instead of producing, I don't want to live in such a system."

The Americans don't like those kinds of populist tones. Sarkozy's promise that he will have strong words for Obama about the failed EADS bid to build planes for the Pentagon has also led to skepticism in Washington about the nature of his visit. The French are blaming American protectionism for the decision by the European aerospace giant and its partner Northrop Grumman to withdraw from a bid to manufacture 179 tanker jets for the US Air Force in a massive contract with a total value of €35 billion. Sarkozy claims the bidding process favored Boeing.

Of course, Sarkozy needs to score points back at home, too. Only last weekend, he was punished in regional elections in France. In an interview, Sarkozy's own father advised his son not to run for re-election. Given his electoral setback, it makes sense for Sarkozy to bang the drum for French and European interests in Washington.

Obama, on the other hand, is feeling reinvigorated following the passage of his healthcare reform through Congress and the new arms treaty with Moscow. And his whirlwind trip over the weekend to Afghanistan underscores the fact that he now feels prepared for new tasks -- on the international level, too. He could probably simply laugh off any possible French provocations.

But that's exactly what gets under Sarkozy's skin. For a long time he has tried to position himself as Obama's biggest fan. During group photos he always squeezes his way in next to the American, and he has tried to secure for France the special relationship that Britain has traditionally had with Washington. At the end of the day, even the otherwise US-critical French love Obama -- even if they have reservations about his country's policies.

But Obama hasn't seemed to take Sarkozy seriously. When he has, he has often reacted with irritation towards the French president's brisk leadership style. When the US president traveled to Paris last year, he preferred to dine with his wife Michelle rather than Sarkozy. "The hoped-for partnership never materialized," the French daily Le Figaro wrote.

Sarkozy hasn't forgiven his American colleague for it, either. He has complained to those close to him that Obama is ill-prepared to govern, noting that he didn't even hold a cabinet-level position before taking office. And he has responded in public to Obama's vision of a nuclear weapons-free world with little more than a polite smile. During his recent speech before the United Nations, Sarkozy reminded the Americans that we live in a real world, not a virtual one.

Sarkozy has little to contribute when it comes to Afghanistan, either. Close to 4,000 French troops are stationed there. But when the Americans asked for more, Sarkozy refused to pledge further troops. The deployment is very unpopular in France.

Of course, that will all be forgotten during his Washington visit, French officials claim. They insist that the alleged conflicts are media fabrications. In an interview with the International Herald Tribune and French journalists last week, Obama's National Security Advisor, James Jones, described Sarkozy as a "very helpful and steadfast ally."

'I Am a Friend of America'

But this visit will hardly be as triumphant as Sarkozy's last big trip to Washington in 2007. Back then, the French wanted to single-handedly repair a trans-Atlantic relationship that had suffered under the strains of the Iraq war. "I am a friend of America," Sarkozy beseeched his fellow countrymen in France before he departed for the States. "Don't torture me for it." During a gala dinner at the White House, Sarkozy promised to win back the hearts of Americans. He spoke before Congress and he commemorated the historical roots of the French-American partnership together with then-President George W. Bush -- the 250th birthday of General Lafayette, whose military genius saved the Americans from the Brits during the War of Independence.

By comparison to that, his dinner in the Obama's residential quarters looks to be a pretty modest affair. It's also symbolic of the disillusionment right now in trans-Atlantic relations. The Americans are disappointed that, even after the ratification of the Lisbon Treaty -- which was meant to give the European Union's common foreign policy more clout -- the individual European countries are continuing to pursue their own interests abroad. The question, former senior US diplomat and current Harvard professor Nicholas Burns argued in an interview with the New York Times, is whether Europe can "develop a collective European idea of global power? They talk about it a lot, but they don't do it."

At the same time, the Europeans have been irritated by the cold shoulder Obama has shown them. The US president hardly seems to even pay attention to France's reintegration last year into NATO's structures. The Washington Post has even criticized Obama for this, noting that in contrast to his predecessors, he hasn't established close ties to a single European leader.

But those close to the president say this is simply a misunderstanding that will be cleared up during personal meetings like Sarkozy's visit to Washington. John Podesta, the leader of Obama's transition team that helped prepare the newly elected president for the White House in 2009, told SPIEGEL: "His style is certainly different from George W. Bush who wanted to be liked and really developed deep personal relationships." 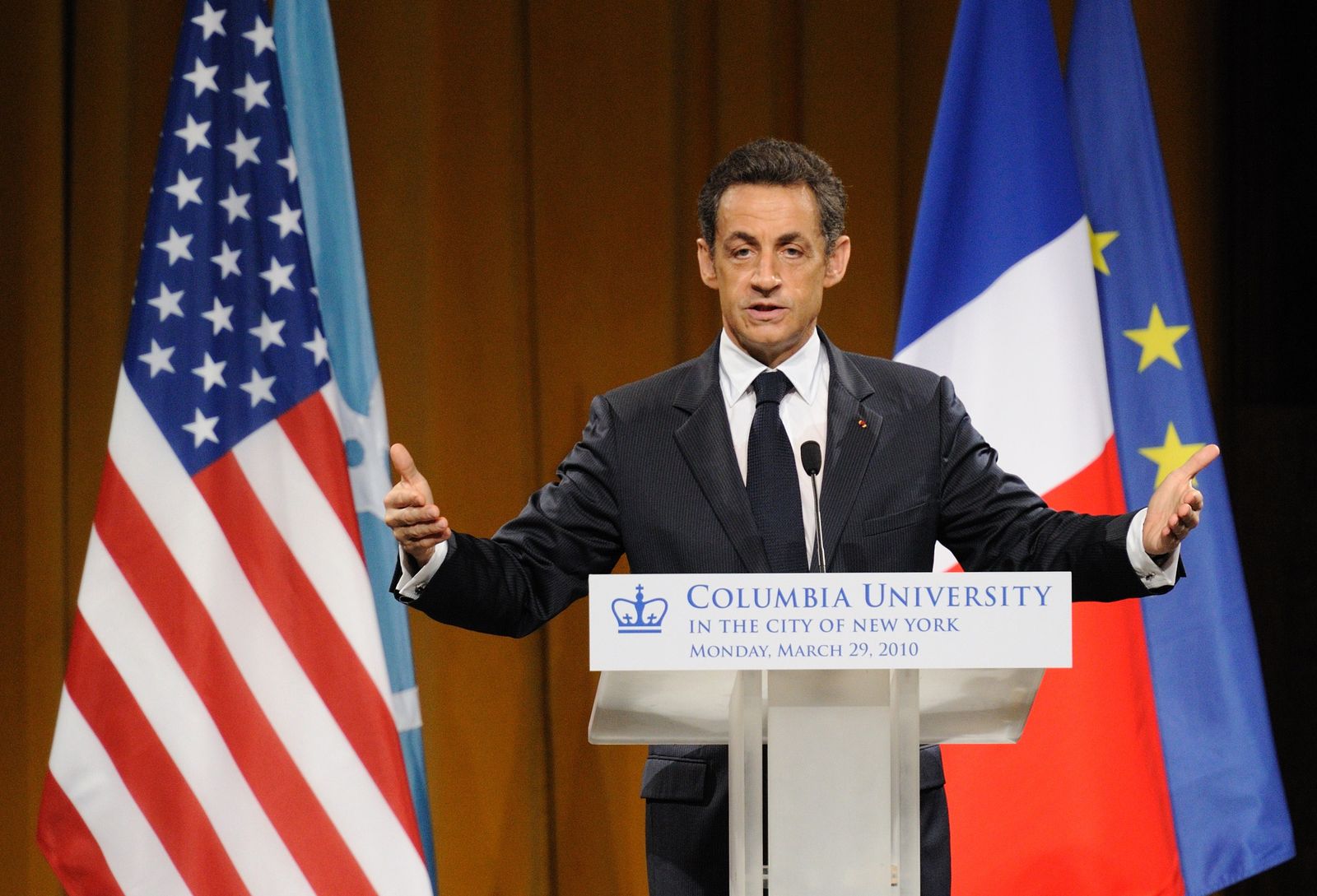 Nicolas Sarkozy: The French president during his speech on Monday to American students at New York's Columbia University