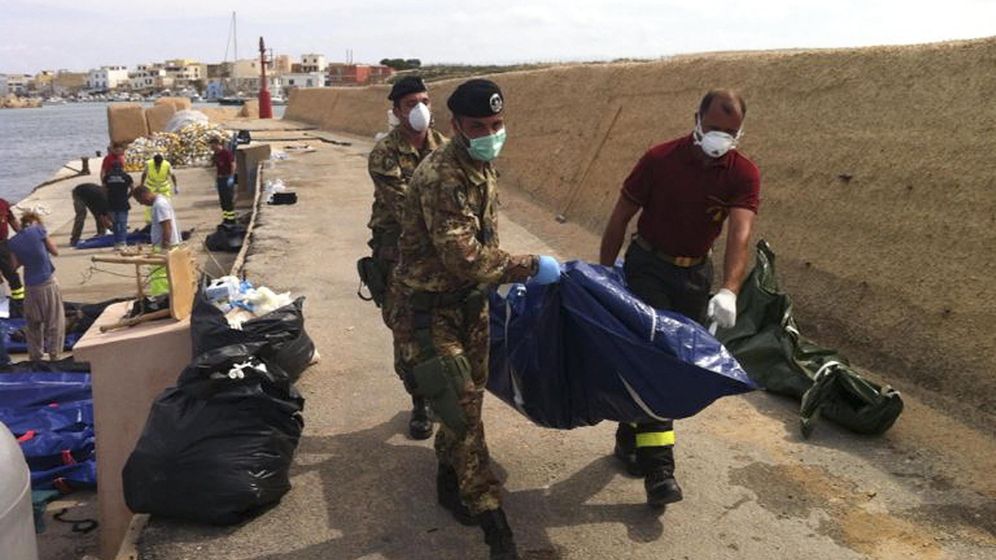 Photo Gallery: Death in the Mediterranean

The scenes verged on the apocalyptic: 500 people, many of whom couldn't even swim, were forced from a burning ship into the sea. The events that took place early Thursday morning off the Italian island of Lampedusa have shaken all of Europe.

More than 100 refugees were killed, including children. Hundreds are still missing. It's the second such disaster to happen within just a few days. On Monday, 13 refugees drowned off the coast of Sicily as they attempted to swim to shore.

Now the bodies have been laid out in Lampedusa, Europe's southern-most outpost in the Mediterranean Sea. The island's desperate mayor even called on Italian Prime Minister Enrico Letta to visit the site. "Come here and help us count the bodies," she said.

Residents of the small island, which is situated more closely to Tunisia than to the Italian mainland, feel abandoned -- and not for the first time. Since 1999, more than 200,000 people from Africa and Asia have landed on the island fleeing civil wars, hunger and misery. It is estimated that 10,000 to 20,000 people have perished making their way to Lampedusa.

This year, more refugees have arrived on the island than in any previous year. They come from Somalia, where criminal gangs spread terror and death each day, from Eritrea, where people have no future, and from Egypt, Libya and Tunisia, where the Arab Spring started as a dream but has since become a nightmare for many. Since January, 22,000 refugees have arrived on the coast of Lampedusa. The island has become a powerful symbol of the failure of the European Union's refugee policies.

The Myth of an 'Freedom, Security and Justice'

The attempt by European politicians to find the middle ground between populist slogans like "The boat is full" and a half-way ethically sound migration policy has long since proven to be a dead-end. But no one wants to admit this because they have no other answer at hand. So each time another tragedy occurs on Lampedusa, leaders from other European capitals travel to the site, offer condolences and promise there will be a political response.

On Thursday, European Commissioner for Home Affairs Ceclia Malmstöm said that authorities must improve procedures for identifying refugee boats in trouble. She also said dialogue must be intensified with the countries the refugees come from as well as the transit nations they travel through as they attempt to reach Europe. At the same time, she appealed to EU member states to do more to help people who are seeking asylum.

That's all well and good. But Malmstöm, just like all the other politicians involved in the issue, knows that the problems aren't easily solved. History has shown that. The EU first agreed to a common asylum and refugee policy in 1999 with the Amsterdam Treaty, but it has never worked.

Europe has not become the "area of freedom, security and justice" pledged in the treaty, one in which every refugee, regardless of where in the EU he or she is, is guaranteed the same fair asylum procedure. Nor has the EU come through on the pledge that the disproportionate burdens faced by countries on Europe's borders would be fairly shared by other member states. And how can it? In practice, the policy had one thing in mind: taking in the smallest number of refugees flowing in from the south and the east as possible. The modus operandi has always been that European countries take care of themselves. Their only common position has been in fighting against those who want to come to Europe.

The countries of Southern Europe -- Italy, Spain and Greece -- have been hit particularly hard by the transcontinental migration and have been quick to take their own initiative. In almost theatrical gestures, politicians, led by Italy's Silvio Berlusconi when he was still prime minister in Rome, traveled throughout North Africa to pay homage to presidents and dictators, to coddle Libya's ruling colonel and enter into treaties by the dozens. The message was always the same: We'll pay you money, give you speed boats and other weapons, and you keep the refugees from our shores. We don't really care how you do it.

Those who nevertheless decided to dare the risky trip over the ocean in dilapidated boats were often intercepted at sea and sent back. It was a nifty way of circumventing the legal right to submit an asylum application in Europe. As a result of the policy, the number of asylum requests filed in Europe dropped from 460,000 in 1992 to 220,000 in 2007.

Despite all statements to the contrary, the EU partners built a "Fortress Europe." When that image at times appeared too tough, politicians issued words of regret or tried to hush up events.

And it didn't matter if it was the United Nations High Commissioner for Refugees, Amnesty International or the Catholic charity Caritas that was doing the criticizing; the EU countries simply didn't care. Germany itself was able to keep away from the refugee trail through the EU's Dublin Convention, which stipulates that an asylum seeker can only apply for asylum in the first member state that he or she entered. So anyone who comes to Germany through Italy or Greece -- even if they have a legitimate reason for seeking asylum -- is sent back to that country by German authorities.

To be sure, Fortress Europe's walls are becoming less and less porous -- with radar and satellite controls in the Mediterranean Sea, for example -- but they still haven't stopped millions of people from fleeing the world's impoverished and war-ravaged nations. They sacrifice their family savings and risk their lives to get here. And for as long as these people have no future at home and can't even be certain they will survive the next day, they will continue to flee -- either to a place that is better or one that at least offers the prospect of a future.

The majority flee to refugee camps in neighboring countries. Others go further -- often in the direction of Europe. With the anti-refugee treaties between Southern European and Northern African countries, the price for passage across the Mediterranean is also rising with the need to bribe officials in those countries. Risks are also increasing for the refugees, with human traffickers often dumping them near rather than on shore -- which can be deadly for the large number of non-swimmers making the journey.

This makes disasters like the one that occurred in Italy on Thursday a foregone conclusion. Pope Francis described the tragedy as "a disgrace." He's right.