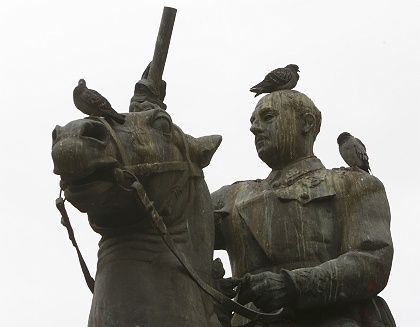 A statue of Franco in central Santander. Spain is coming to terms with its past through a new law.

Unlike other countries, such as Germany and Argentina, Spain has never fully come to terms with its former dictatorship. Instead, its politicians have tacitly agreed to not mention the legacy of the Franco regime in the interests of national harmony. But now the country is addressing its dark past with a landmark piece of legislation that has divided the country.

The Spanish parliament Wednesday passed a historic bill that condemns the almost 40-year dictatorship of General Francisco Franco and makes symbolic amends to victims of the 1936-1939 Spanish Civil War.

The new "Law of Historical Memory" declares that sentences handed down by kangaroo courts during the regime, which led to the imprisonment or execution of thousands of Franco's opponents, were "illegitimate." It also decrees that local governments must help locate, exhume from mass graves and identify the bodies of victims of the dictatorship. The remains of tens of thousands of Franco opponents are believed to be buried throughout the country.

The bill also requires that all statues, plaques and symbols of the regime be removed from public buildings. However, an amendment to the law means that the Catholic Church will not have to remove Francoist symbols -- such as the national badge with an eagle or the Fascist arrows and yoke symbol -- from memorials and other locations, provided "artistic-religious" reasons justify keeping them. The Church was a staunch supporter of Franco.

The bill was a priority for Socialist Prime Minister Jose Luis Rodriguez Zapatero, whose own grandfather was executed by Franco's forces, and it is expected to become law later in November after being rubber-stamped by the upper house of the Spanish parliament.

The new law is highly controversial within Spain. Politicians from the conservative opposition party, the Popular Party, founded by a top Franco minister, oppose the law, saying it reopens old wounds that had not completely healed. Popular Party spokesman Eduardo Zaplana said Wednesday the law was "unnecessary" and "prejudicial to national harmony."

On the other side of the political spectrum, left-wing Catalans have said that the law does not go far enough, as it does not annul convictions of left-wing prisoners under Franco.

Nevertheless, many Spaniards support the new bill. "This is a very important moment for Spain," said Emilio Silva, who heads an organization that works to exhume bodies of civilians killed by Franco's forces during the Spanish Civil War. "But this law is the beginning, not the end, and it is long overdue," he added.

The law comes just days after the Vatican, in the largest-ever ceremony of its kind, beatified nearly 500 Roman Catholics killed during the civil war. The move was criticized by some Spaniards as most of the martyrs were victims of Franco's leftist opponents.

Franco and his supporters staged a military coup in 1936, overthrowing the elected leftist Republican government and triggering the Spanish Civil War. Franco would remain in power until his death in 1975.

Although Spain underwent a transition to democracy after Franco's death, political parties made an unspoken pact to ignore the suffering of the war years and the dictatorship in the interest of national reconciliation, and no war crimes trials were held.