The Hungarian high school in Komarno, Slovakia is the picture of bourgeois solidity. Its facade is 101 years old and typifies the colossal architectural style typical of the late Austro-Hungarian Empire. The building is a haven of classical education and an elite training center for the children of the upper classes in the town of 40,000 inhabitants situated at the confluence of the Danube and Vah rivers.

To mark the start of the new school year, the pupils are wearing white shirts and a blue tie emblazoned with the school crest. And today they also intend to break the law. 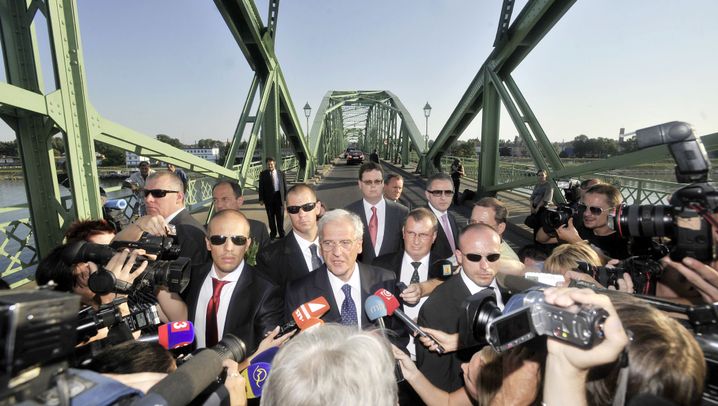 Some 600 boys and girls walk two abreast onto the basketball court to the strains of Beethoven's "Ode to Joy." A senior reads a poem in Hungarian about the beauty of the surroundings. The school principal then addresses the pupils in Hungarian, and he is followed by the principal of a partner school in Hungary, who also speaks in Hungarian.

After half an hour standing in the sun, the pupil's shirts are sweated through, but not a single Slovakian word has been uttered. And that is apparently now illegal.

According to legislation passed in Bratislava that came into effect on Sept. 1, the Slovakian language must have precedence in public -- on billboards, in official declarations and on monuments. The pupils and teachers of Janos Selye High School consider that a restriction of their liberty, and that is why they have decided to use only their mother tongue today.

'Unshakeably Loyal to Your Motherland'

At the close of the ceremony, the music blaring out of the loudspeakers is not the Slovakian national anthem but the "Szozat," a patriotic Hungarian song from the 19th century. One of the lines of the song is "Oh Hungarian, be unshakably loyal to your motherland."

More than half a million ethnic Hungarians live in southern Slovakia. Nationwide, they account for almost 10 percent of the population. In Komarno -- the Slovak half of the Hungarian town of Komarom cut in two after World War I -- ethnic Hungarians are even in the majority.

Apart from a few scuffles between soccer hooligans, the Slavs and Magyars -- that is, ethnic Hungarians -- have lived side-by-side in relative peace up to now, as they have more-or-less throughout history. There have been occasional flare-ups over sovereignty of the Carpathian Basin, but the Slovaks and Hungarians have not engaged in any bloody ethnic cleansing in recent times -- a veritable anomaly in multiethnic Eastern Europe. And yet fully five years after Hungary and Slovakia joined the European Union, Bratislava and Budapest suddenly find themselves squabbling over the ethnic Hungarian minority.

The Slovaks are driven by fears of age-old Hungarian megalomania. Not without reason: Their country was known as Upper Hungary and ruled by the Hungarian monarchy for almost a thousand years. "Hungarians keep insisting that southern Slovakia is their territory," says Slovakian President Ivan Gasparovic.

For their part, ethnic Hungarians are frustrated at being a minority in the small Carpathian state. Hungarian President Laszlo Solyom calls Slovakia's new language law "a breach of multilateral agreements" that degrades Hungarian and demotes it to a "kitchen language." Although Slovakian Prime Minister Robert Fico and his Hungarian counterpart, Gordon Bajnai, sought to calm the waters at a summit last Thursday, the fact remains that relations between Bratislava and Budapest are worse than those between any other neighboring countries in the EU.

One of the guests of honor at the high school is Mayor Tibor Bastrnak. He is also an ethnic Hungarian. Bastrnak recently sparked a relatively major diplomatic crisis when he erected a monument on the town's main road. The monument is topped by a statue of Hungarian national hero Stephen I on horseback and in imperial pose. The guest list for the unveiling ceremony included Hungarian President Laszlo Solyom, but not Gasparovic, the Slovak head of state.

In a tit-for-tat move, the piqued Slovakian government refused to allow Solyom to cross the bridge over the Danube that marks the border separating the divided town and the two countries. After all, Stephen I (969-1038) is seen as not only the founder of the Hungarian empire but also the conqueror of Great Moravia, the entity nationally conscious Slovaks consider the medieval precursor to modern-day Slovakia.

Mayor Bastrnak attempts to defuse the tension. "Slovaks can be proud of Stephen, too," he says graciously. Hadn't King Steven, he asks, expressly wanted "many languages to be spoken in his kingdom"?

Just in case local ethnic Slovaks think otherwise, Bastrnak has taken the precaution of posting a squad car next to the statue, which is now guarded by two police officers around the clock.

The mayor chairs a municipal council in which the ratio of ethnic Hungarians to ethnic Slovaks is 23:2. Hungarians also dominate the public spaces in the beautifully restored old town, which is packed with monuments to Hungarian heroes. Freedom fighter Lajos Kossuth has a plaque next to the town hall just because he spent the night of November 6, 1848 in Komarno.

Bastrnak doesn't think he and the other ethnic Hungarians are being oppressed in Slovakia. He says most sections of the controversial new language law only apply in areas in which ethnic Hungarians make up less than 20 percent of the population, and official forms and inscriptions are always bilingual anyway. Nevertheless, he thinks the language law has had a devastating psychological effect. "It gives the impression that we now have to assimilate," he says. And he blames Slovak nationalists for the worsening relations.

Bastrnak has a point. Jan Slota, the founder and head of the Slovak National Party (SNS), has gained political capital for years with anti-Hungarian rhetoric. The SNS is part of the governing coalition, and the language law was enacted to appease him.

The Hungarians aren't alone in having national symbols; the Slovaks also cherish theirs. A few hundred yards from the stone statue of Stephen, a bronze twin-bar cross points up into the sky. The distinctive cross erected in 2003 above the entrance to the Matica Slovenska, a global Slavic cultural institute, is one of the five national symbols of Slovakia and associated with Saints Cyril and Methodius -- medieval missionaries and national heroes credited with bringing Christianity to the Slavs.

Josef Cernek heads the office in Komarno. But the 31-year-old businessman is anything but a fervent nationalist. "The language law is completely superfluous and creates unnecessary concern," he says. Cernek even admits he envies his ethnic Hungarian compatriots for their "strong feelings of cohesion and great pride in their culture."

Cernek organizes concerts and poetry readings and is keen to show Hungarians that "the Slovaks also have something to offer." He's less worried about the flood of Hungarian monuments in his town than the fact that Hungarian politicians are trying to play the national card. "Because they don't have a solution to the crisis, they claim Slovakia is doing minority Hungarians an injustice," Cernek says. That, he believes, could have serious consequences.

Former Slovakian Deputy Prime Minister Pal Csaky, the leader of the Party of the Hungarian Coalition, wants to raise the issue of the alleged discrimination against ethnic Hungarians before the US Congress. And Hungary's opposition leader, former Prime Minister Viktor Orban, promises to represent the interests of "all Hungarians in the Carpathian Basin" if his party wins next year's election. That would include not only ethnic Hungarians in Slovakia, but also the larger groups living in Romania, Serbia and Croatia. Orban's party believes the plight of all Europe's minorities could be solved by adopting the Kosovo model.

The Magyars have been scattered across a number of eastern European countries ever since Hungary was chopped up by the 1920 Treaty of Trianon imposed by the victorious Allies after World War I and the breakup of the Austro-Hungarian Empire. The treaty slashed Hungary's sovereign territory from 282,870 square kilometers to 92,963, and cut the domestic population from 18.3 million to just 7.6 million.

Another world war later and after the collapse of the Eastern Bloc and Hungary's return to a democratic Europe, many ethnic Hungarians are still suffering from the after-effects of this dispersal. Peter Korpas is one such example. The slim 39-year-old studied protestant theology in Budapest, and worked as a pastor for a few years. When he could no longer satisfy the needs of both his family and his congregation, he quit the church and began selling PVC flooring. He speaks Slovakian with a very strong accent.

Korpas doesn't feel comfortable in Komarno. "We are repressed," he says -- even though the borders are now open and he could wander across the bridge into Hungary and back again whenever he wants. "It's just not our state," Korpas insists, adding that his Hungarian grandfather was expropriated after the war. "What became of the land?" he asks. "I never got it back."

Korpas has formed a citizens' action group. He's had silver rings made and engraved "1920, Trianon." He sells them for 8,000 Hungarian forints (about €30 or $44) each. Korpas says he's already sold 400 of his rings. In another 18 months, he reckons he'll have enough money to set up a monument to commemorate what he considers the disgrace of 1920. And he plans to erect it in Komarno -- that is, on Slovakian territory. "The monument will remind Hungarians that we will never accept Trianon," Korpas says defiantly.

If he does, he'll probably trigger yet another monumental row.