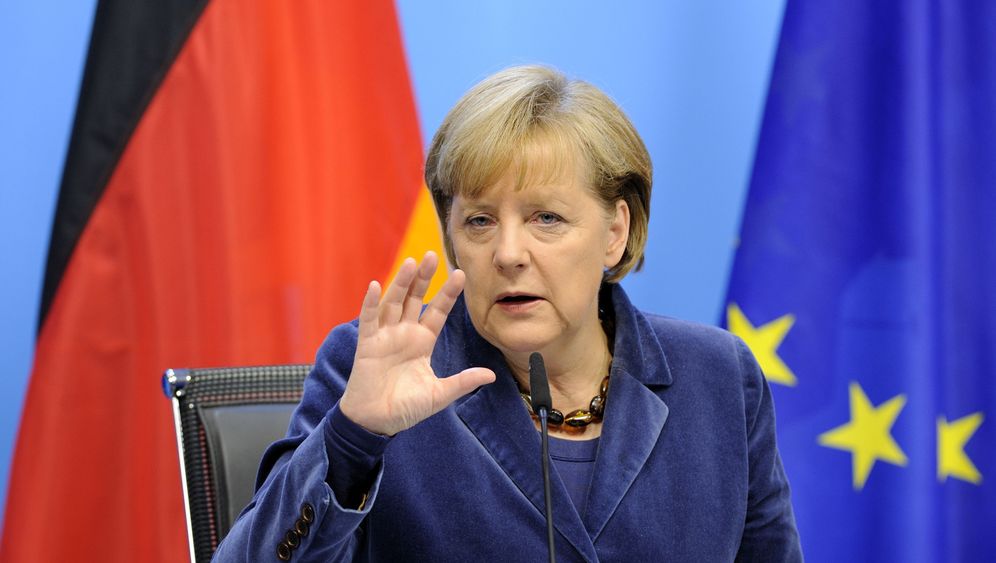 Photo Gallery: Europe Meets to Save the Euro

Normally, European leaders have nothing against extended bargaining sessions with seemingly no end in sight. But on Wednesday night, they gave themselves a deadline. Belgian Prime Minister Yves Leterme announced prior to the meeting that the 17 heads of state from the euro zone would have to finish up their haggling before the first markets opened in Asia. Otherwise, he seemed to suggest, global stock prices would plummet on Thursday morning.

And yet, summit participants ignored one deadline after another. At 2 a.m., the markets opened in Japan, but euro-zone leaders continued to haggle. At 3 a.m., Singapore opened, and the meetings were still going on.

It was only just before 4 a.m. -- the stock exchanges in Shanghai and Hong Kong had already begun trading -- that a visibly exhausted French President Nicolas Sarkozy stepped before the press in Brussels. Euro-zone leaders, he announced, had agreed with private creditors on a 50 percent reduction in Greece's debt burden.

The announcement was consistent with the number which had dominated the headlines for days. Euro-zone leaders had reached their primary goal.

"France had always wanted to avoid the drama of a Greek insolvency," Sarkozy said. He left unmentioned the fact that he had long resisted the idea of a substantial, voluntary debt haircut for Greece. It was one of several positions that France was forced to abandon in the course of the last six days of summit meetings.

German Chancellor Angela Merkel, on the other hand, seemed fresh and energetic when she stepped before the media just a few minutes after Sarkozy. "It was clear to me that the world was watching us today," she said. "We Europeans showed that we are able to reach the correct conclusions. We found agreement on a complete package."

The primary goal of Wednesday night's summit was to convince Greece's creditors to accept a voluntary debt haircut. And to hear Merkel tell it, European governments piled the pressure on the Institute of International Finance (IIF), which was representing the interests of private creditors at the meeting. If they weren't prepared to voluntarily accept a 50 percent reduction of debt, European politicians told them, then it would be forced upon them. "We only made a single offer and said that it was our final offer," Merkel said.

But it took hours before the IIF negotiators finally buckled and agreed to the deal. Sarkozy and Merkel spent much of the evening and night going back and forth between the euro group meeting and the office where the bankers were sitting. They were also pushed to offer €30 billion in guarantees on the remaining value of new bonds in order to sweeten the deal.

Thursday's agreement essentially ripped up the deal agreed to in July, worth €109 billion. It had become apparent in recent weeks that Greece's financing needs were significantly higher and that its economy was not developing as hoped.

The July deal had gone easy on banks and other private holders of Greek debt. They agreed to accept a debt haircut of 21 percent -- based on the low market value of the bonds at the time. The new deal, however, is much more painful. It foresees banks writing down 50 percent of the face-value of their Greek bonds -- a loss of €100 billion and genuine debt relief for Athens. The remaining €100 billion will be traded in for bonds with longer maturation periods and lower interest rates. The exchange is to take place in January 2012. It is these new bonds which will be guaranteed by the EFSF to the tune of €30 billion.

In addition, a second aid package for Greece has been revised and now has a total value of €130 billion, up from the €109 billion that had been agreed in July.

By 2020, Greece is expected to decrease its debt level from a current 160 percent of gross domestic product down to 120 percent. That's the level at which it is believed the country would again be able to raise fresh capital on the markets.

Despite the deal on Greece, leaders did not succeed in reaching the comprehensive package they had been seeking. They did, however, provide fundamental approval to the three key elements they believe are necessary:

But details of the leveraging of the EFSF remain scant. The euro-zone finance ministers have been tasked with reviewing both of the models for leveraging that were discussed -- that of offering insurance or first loss guarantees, and of creating a special investment vehicle. Merkel and Sarkozy assured that the solution would increase the €440 billion rescue fund's firepower to over €1 trillion. But so far that remains little more than a claim. For example, it remains unclear how interested foreign governments will be in buying up bonds from troubled euro-zone countries. On Thursday, Sarkozy is expected to conduct his first sales discussion -- with Chinese President Hu Jintao.

Merkel and Sarkozy also praised the pledge made by Silvio Berlusconi to make a greater effort at austerity and to introduce more structural reforms. The Italian prime minister agreed to reduce his country's debt level over the next three years from a current level of 120 percent to 113 percent of GDP, they said. Starting in 2026, Rome is also expected to increase its retirement age from 65 to 67.

On Sunday, the French-German duo had applied considerable pressure to Berlusconi during a personal discussion with him. The fact that Merkel and Sarkozy smiled during a press conference when asked if they trusted Berlusconi caused a stir in Italy. But at Wednesday's summit, Merkel appeared to be seeking conciliation. As she entered the room with Sarkozy, she smiled and the Italian prime minister was the first person she approached. During a break in the summit, Berlusconi said in a television interview that Merkel had apologized to him -- a statement the German government immediately denied. "The chancellor has no reason to apologize," a government source said.

With a few hours having passed since the deal, Europe has yet to plunge into chaos. Asian markets responded positively to the package on Thursday morning, even if it is still incomplete.

Editor's note: You can read a PDF file of the official concluding statement from the EU summit here.

13 Bilder Photo Gallery: Europe Meets to Save the Euro 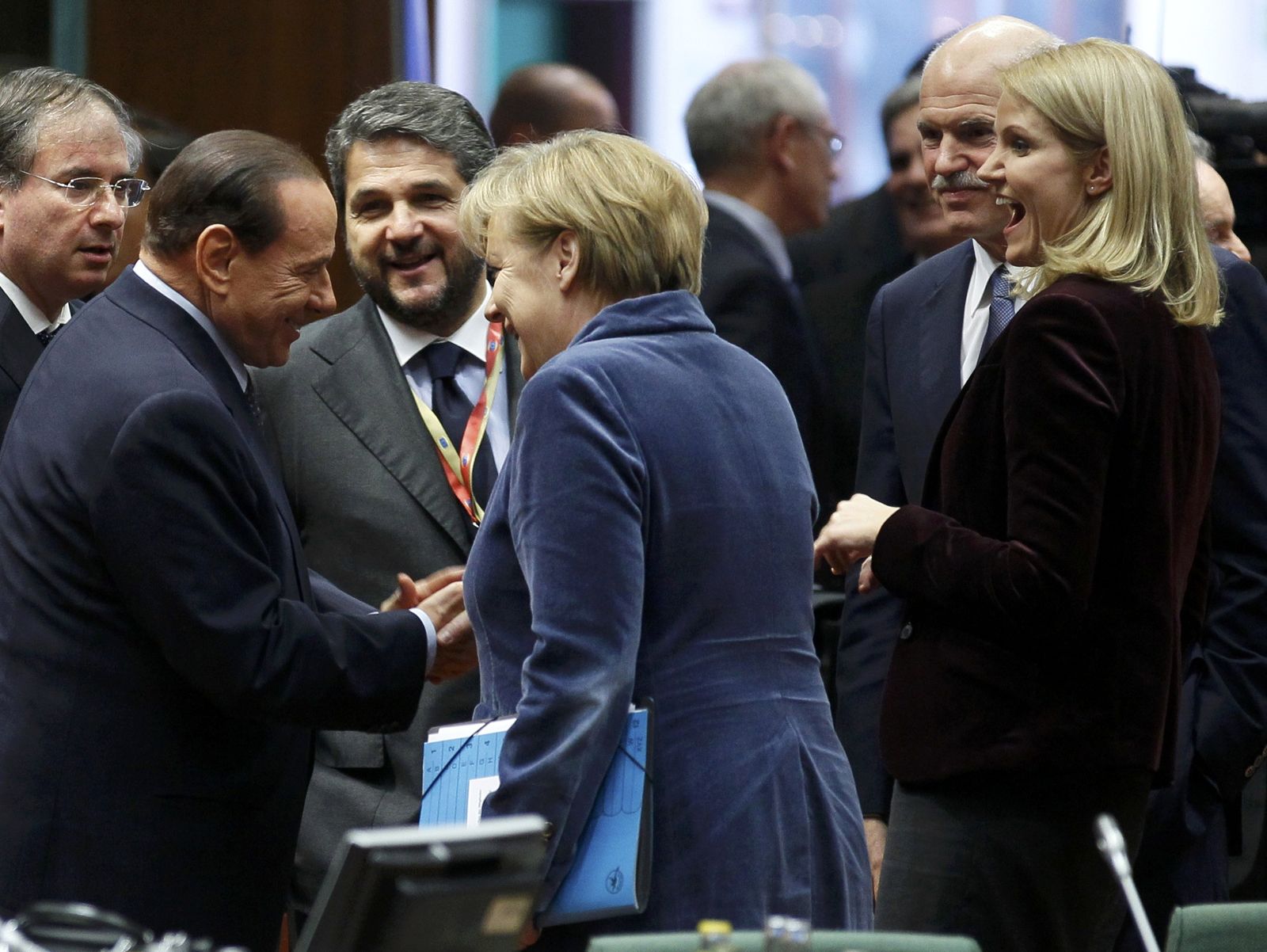 But Berlusconi and Merkel were all smiles when they greeted each other in Brussels on Wednesday. Later, Berlusconi said that Merkel had apologized -- which Merkel's spokesman later denied.