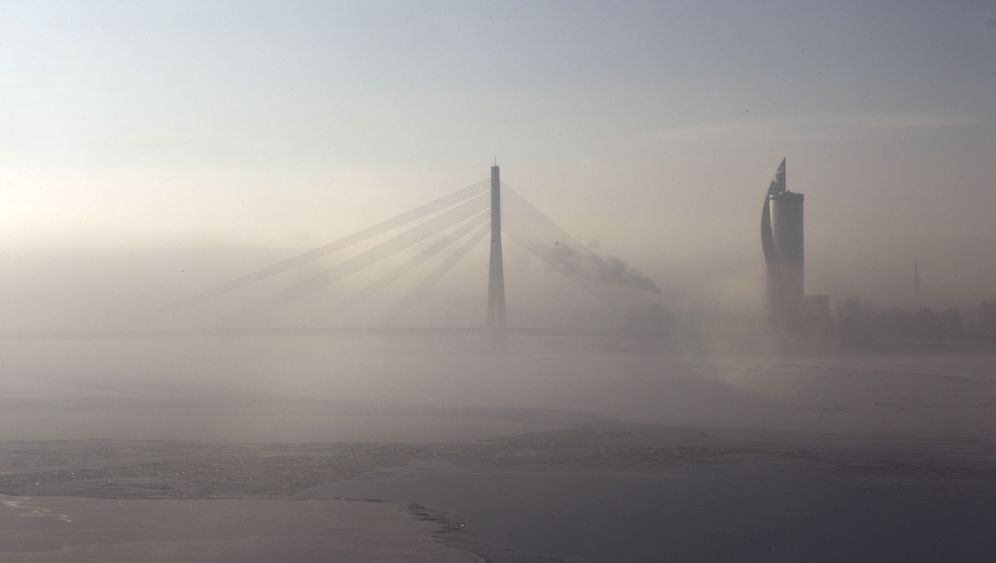 Rietumu Bank isn't in Riga's best neighborhood. The streets are dusty, and graffiti on one building reads: "If Jesus comes back, we'll kill him again." The city's biggest soccer stadium -- which opens onto a meadow on one side -- is right next door.

This is the scene that bank manager Ilya Suharenko surveys from his top-floor office in the Rietumu Capital Centre. But Suharenko, 30, is optimistic about Latvia's future nonetheless. European finance ministers on Tuesday gave the Baltic country the go-ahead to join the common currency union on January 1 next year. Furthermore, new tax laws are set to go into effect at the same time. These laws, says Suharenko, will put his country "on a level with Ireland, Malta and Cyprus."

"It is a seal of quality for Latvia as a financial marketplace," Suharenko says. "The euro is coming and capital will follow."

Many observers don't share Suharenko's euphoria, though. Riga's planned reform has been designed to transform Latvia into the euro-zone's next tax haven. And it highlights the degree to which rhetoric and reality diverge in the European Union.

Ever since the International Consortium of Investigative Journalists (ICIJ) exposed the vast scale of tax evasion undertaken by multinationals around the world, the European Commission has made combating financial trickery a top priority. Theoretically, at least. In practice, exactly the opposite has happened. "Instead of eliminating established tax havens, we have added a new one to the euro zone," says Sven Giegold, a financial expert with the Green Party in the European Parliament.

Latvia's corporate tax rate is just 15 percent, far lower than the EU average of 23.5 percent. Within the euro zone, only Ireland and Cyprus, each at 12.5 percent, have lower rates. Yet the banking systems in both of those countries have collapsed -- and both have been forced to seek emergency aid money from EU bailout funds.

Holding companies -- firms that hold stock of other companies -- enjoy further benefits in Latvia. Since the beginning of 2013, their foreign profits earned via dividends and stock sales have been tax free. Transferring such profits out of country is also not taxed. Furthermore, as of 2014 Latvian holding companies will no longer have to pay taxes on interest and licensing fees they pay to foreign companies.

Such structures allow foreigners to not only park their money in Latvia, but also use it as a bridgehead to transfer money at low cost from Europe to tax havens such as the Cayman Islands. Indeed, Latvian law will impose even fewer limitations and lower fees for such transfers than exist in such countries as Malta, Ireland, Cyprus and the Netherlands.

Markus Meinzer, an analyst with the Tax Justice Network, has already begun calling Latvia a "Luxembourg for the poor."

There have been instances, however, in which Latvia has gone beyond merely offering a variety of legal possibilities to avoid taxes. Formally, Latvia has improved its laws relating to money laundering. But several loopholes still remain, according to an analysis performed by Moneyval, the Council of Europe body focused on combating money laundering and terrorism financing. The report noted that adherence to regulations is not strictly monitored in all cases.

The result is that money with shady origins keeps appearing. In April 2012, the United Nations Security Council determined that Latvia's Parex Bank (which has since changed its name to Reverta) assisted military officers from the Ivory Coast in circumventing international sanctions. The bank refused to comment on the allegations. In mid-June of this year, a different Latvian bank was fined €191,000 ($249,000) for allegedly helping launder hundreds of millions of dollars that were stolen from the Russian government.

Latvia's financial marketplace is primarily attractive to customers from Russia and former Soviet states. Many private and corporate clients from these countries seek to keep their money safe from the kleptocratic elite at home. Others have darker motives.

Connections between Latvia and Russia have always run deep. Every second person in Riga has Russian origins and seven flights a day connect the city with the Russian capital. Even outside Riga, most people understand the Russian language and mentality. "Since the beginning of the 1990s, Latvia has continually expanded its status as a regional banking center for the former Soviet territories," says Tatiana Lutinska of Prime Consulting, a law firm in Rietumu Bank headquarters which manages foreign customers' holding companies.

Thanks to lower tax rates and the euro, interest is growing, Lutinska says. "We are receiving hundreds of inquiries from Russia, Belarus, Kazakhstan and Ukraine. Many want to move their money from Cyprus to Latvia. We are now better than Cyprus," she says.

Others are also trying to profit from the atmosphere of fear which has surrounded Cyprus. Privacy Management Group, an offshore agency headquartered in Cyprus, offered customers special conditions at the end of March for those who wanted to open a new account in Latvia. The offer was made just as the banking crisis was erupting in the Mediterranean island nation. At the time, Nicosia was forced to close the country's banks for 12 days to prevent huge quantities of money from being moved abroad.

For the moment, there is little concern about Latvia's financial health. Bank balance sheets in the country were only equivalent to 128 percent of the country's gross domestic product at the end of last year. The EU average is 359 percent.

But with lower tax rates and impending euro-zone membership, that could soon change. "Latvia's share of fees paid by offshore havens has risen sharply in recent years," says Meinzer of the Tax Justice Network. "This trend is likely to continue." Rietumu manager Suharenko hopes that "at least 10 percent of the capital in Cyprus comes to Latvia" in the next three years.

The EU, by contrast, wrote in its Convergence Report on Latvia in early June that the country's financial system is stable. Latvian Prime Minister Valdis Dombrovskis has also sought to calm worries. "The new tax law was introduced in order to strengthen the competitiveness of our financial marketplace, but it will definitely not create a massive capital influx," he said recently in an interview with SPIEGEL ONLINE. "The law does not conflict with the stability criteria of the euro zone."

In reality, however, the stability criteria do not call for an analysis of the risks posed by the Latvian tax model, despite the problems encountered by Cyprus. "It is a mistake that euro-zone member states only look at inflation and the health of public finances when new countries are admitted to the currency union," says Green Party politician Giegold.

He demands that laws be made consistent with the euro-zone norm. But that doesn't seem realistic. As long as countries such as euro-zone founding-member Luxembourg continue to defend their own financial marketplace, tax havens will continue to be admitted to the common currency area. And they will continue to present even more risks to the already shaken currency.