The best thing Angela Merkel can do for Germany is to resign. Not immediately, but after the term of European Council President Herman Van Rompuy expires, namely in one-and-a-half years. Then Merkel should become his successor. Others can govern in Germany, but Merkel is more important for her country in Brussels. In taking the position, the chancellor could demonstrate that she takes the European Union seriously, as seriously as is appropriate.

Recently, it seemed as if Merkel were feeling particularly well disposed toward Europe. During the banking crisis and the euro crisis, she represented, and still represents, what she believes to be German interests, and in doing so she alienated many of Germany's partners. Since then, Germany has come across as a national egoist. This role is not good for us.

Germany needs Europe, and Europe needs Germany. This is still true today, but for different reasons than in the past. In the first few decades after World War II, our neighbors wanted to contain Germany so that they could tame the German demon. The Germans needed Europe so that they could play a role on the international stage once again. Even back then, it was about national interests, but it was also about emotions, because Germany's enemies in the war were called upon to forgive the Germans for many transgressions. The fact that they were able to do so sparked a deep feeling of gratitude among the political generations of Chancellors Konrad Adenauer, Willy Brandt and Helmut Kohl, who had also experienced the war. The European Union is probably the biggest product of reconciliation in history.

Merkel, too, is familiar with this gratitude, but she doesn't perceive it as deeply as the members of the war generations. But it isn't even necessary that she does. Germany should not forget the magnanimity of its neighbors, but 60 years have now passed and there is nothing wrong with coolly pursuing interest-based policies. So what are Germany's interests?

In Search of the West

In the past, the so-called Atlanticists were at odds with the Gaullists in Germany. The Atlanticists supported close ties with the United States. The Gaullists saw France as the more important partner, and they had a stronger European bent. Today there is hardly any basis left for the trans-Atlantic position, because the entity that was long called "the West" is in the process of dissolving.

The West consisted of the Western European countries, Canada, New Zealand, Australia and, as its leader, the United States. But now the leader is no longer cooperating. Ever since China began growing rapidly, a new dualism has emerged, with the two superpowers wrestling with each other while at the same time seeking compromise. But unlike the military dualism with the Soviet Union, America does not need any allies to support its relationship with China. It does not need countries to provide soldiers, tanks, aircraft and parade grounds. For this reason, Germany no longer really has a trans-Atlantic option.

The Federal Republic of Germany is a late birth of the West. Before 1949, the Germans were not interested in cooperating. Their attitudes toward what the German historian Heinrich August Winkler called the "normative project of the two Atlantic revolutions" in his major book "Geschichte des Westens" ("History of the West") ranged from skeptical to hostile. The Americans fought for democracy and its principles in 1776, while the French did so in 1789. Those principles included recognition of the sovereignty of the people, the separation of powers, the rule of law and human rights. The Western powers imposed all of this on the West Germans after the war.

As a result of its break with history from 1933 to 1945, the Federal Republic of Germany has no founding myth and no identity grounded in history, like France or the United States, whose people fought for democracy centuries ago. It was only the East Germans who successfully completed a revolution in 1989, but it wasn't enough to shape an overall German identity.

The West is Germany's political identity. Germans have incorporated the achievements of other nations, inserting the revolutions of the French, the English and the Americans into their self-image. The essence of Germany as a successful country today is based on the normative project of the Atlantic revolutions. It was not conceived as a nation-state from the very start. Instead, it was to be part of something else -- part of the trans-Atlantic alliance NATO, part of Europe and part of the West. If the United States gradually bids farewell to this classic version of the West, the only real home left for Germany will be in Europe.

There is no independent, national path for Germany. During the term of former Chancellor Gerhard Schröder, Germany was still referred to as a medium-sized power, but that was before everyone realized how much China's rise to prominence would change the world. Nowadays, being "medium-sized" is no longer effective. Because China is so big and continues to grow, all other countries have become smaller. Policy is now made in different dimensions, based on the yardstick of 1.3 billion people who can be motivated by the promises of capitalism. Today Germany can only exert political influence through the EU, and even that is becoming difficult, because of the strong reciprocal relationship between China and the United States.

Because Germany is strong economically, it could be tempted to pursue a separate path. There is a widespread notion that we are the best and that others are trying to deprive us of something. The true part of this statement is that we are once again among the best. German products are so good that others, particularly the Chinese, are eager to get their hands on them. But this success also creates dependencies. In the worst case, Germany would become China's industrial park, affluent but remote-controlled. It would be an existence without dignity. That's why economic strength must go hand-in-hand with political strength, which Germany can only attain through Europe.

The Germans gave up their beloved deutschmark for the euro. It was the right decision. The euro was effective for many years and is good for Germany, because an exporting nation needs the biggest currency area possible. However, the financial crisis showed that the euro has a serious design flaw, namely that it is not supported by a uniform fiscal and economic policy. The proud nations of Europe were unwilling to give up more than a small amount of their sovereignty, a position that came back to haunt them during the crisis. This is why Germany must stop trying to bolster its position to the exclusion of others. The euro needs a uniform and committed fiscal and economic policy. Then it will be up to politicians to skillfully insert German ideas about stability into the European processes.

The US Is from Mars, Europe Is from Venus

Another area in which greater European unity would be in Germany's interests is security policy. In his 2004 book "Of Paradise and Power," American author Robert Kagan describes the world as follows: The United States is like Mars, the Roman god of war, armed to the teeth, defensive and aggressive, while Europe is like Venus, the goddess of love, gentle and peaceable.

Of course, the soft and cuddly image of Venus is more appealing. But Kagan's theory that Venus can only live in peace because Mars would bail her out, if necessary, should not be dismissed. Like it or not, military might plays an important role in this world. Anyone who hopes to exert influence on the world order must be able to deploy soldiers and fight.

As the situation in Afghanistan shows, the Germans are struggling with this. After the catastrophes of the 20th century, Germany is now a deeply peaceable nation. Nevertheless, it wants to play a role internationally. The best way to achieve this is through a European foreign policy that has at its disposal a European army that brings together the French awareness of power, the British fighting spirit and the German love of pacifism to pursue a reasonable course. Beyond such an army, it makes no sense at all for each European country to maintain a complete military force. In a truly united Europe, Germany would not sacrifice an ounce of security if, for example, it were to transform its navy into a floating museum.

On the whole, focusing narrowly on national interests is no longer compatible with the current era. The world is growing closer together, and the prevention of crises and catastrophes in matters of finance and climate requires a lot of cooperation. In addition, the world's populations are becoming more diverse as a result of migration, which calls individual countries' customs and traditions into question. Germany, too, will not be able to remain the country it is today.

The population will change considerably in the coming decades. New immigrants and the children and grandchildren of immigrants will inject their own ideas into society, ideas that will compete with traditional German ideas. Demographic change will make Germany a far more multiethnic country than it is today. There is nothing wrong with this, but should it also be shaped by multiculturalism? Put differently, how can the good aspects of Germany be preserved?

The attempt by conservative politicians to establish a so-called German Leitkultur ("dominant culture") has failed. No one knows exactly what it should be, and a consensus is not possible. Memories of the period from 1933 to 1945 are still too oppressive for it to be possible to come up with an appealing and welcoming definition of what it means to be German. The nation is most likely to attract new immigrants through its social welfare state. Those who don't need it do not feel particularly attracted to a life in Germany.

The concept of a European "dominant culture" sounds better. Europe encompasses the entire foundation of the West: democracy, which arose in Greece; the legal system, which has its roots in Rome; the Renaissance, which began in what is now Italy; the heliocentric worldview, attributable to the Polish-Prussian astronomer Nicolaus Copernicus; the Enlightenment, whose key thinkers were mainly French, British and German; the concept of social solidarity, first developed in France and Germany; environmental protection, which comes from postwar Germany; and, as a basis for everything, the concept of altruism, which, so they say, originally arose in Asia but influenced Europe early on.

It took horrible struggles and wars before all of this took hold, creating a wonderful continent, whose dominant culture includes democracy, the rule of law, reason, altruism, forgiveness and solidarity. These things could also be part of a German identity, but it is better founded and seems more appealing as a European identity. Immigrants may be attracted by the prospect of being part of Europe. It seems reasonable to have high expectations that those people who want to live here will accept that offer.

It is also a difficult path. Europe's present isn't exactly intoxicating. Bureaucracy dominates in Brussels, and EU policies lack sufficient democratic legitimacy, while European leaders are motivated mainly by national interests. And now, on top of everything else, the euro is under threat. For the Germans, this means they ought to devote their efforts to making sure the European Union is more unified and becomes a fully legitimate, democratic federal state.

It could take time, but it's the goal we should have in mind. Europe is a wonderful home, with a fascinating history and a fascinating unification project in the present. As a German, one can even be a passionate European. Politicians, for their part, shouldn't be afraid of talking about Europe's advantages, even if doing so isn't immediately popular. It would be best if the chancellor got to work right away. As of June 2012, she can continue her efforts in Brussels. 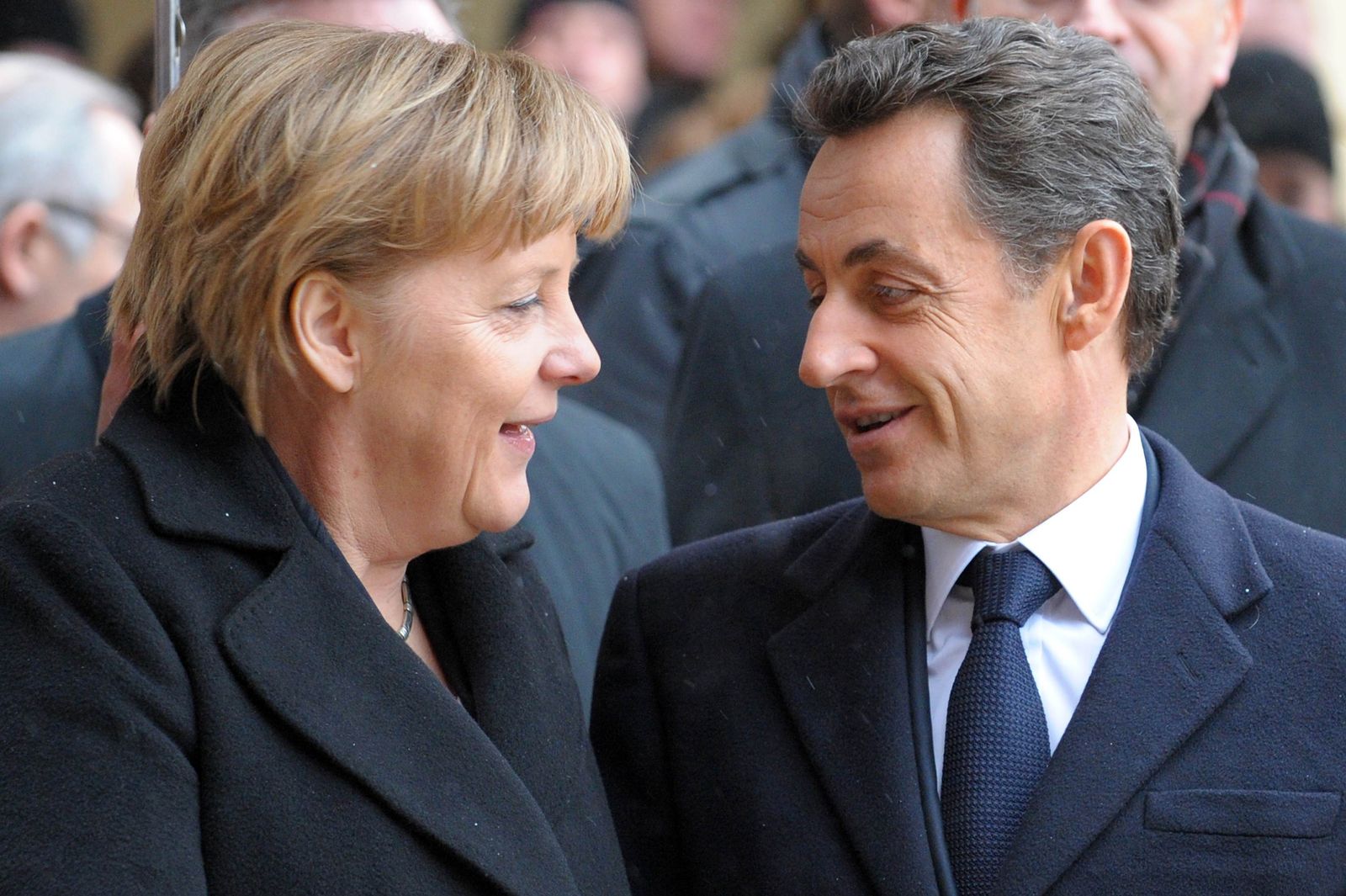 German Chancellor Angela Merkel and French President Nicolas Sarkozy at a German-French meeting in Freiburg on Dec. 10: Germany needs Europe more than ever.