Will 2008 be remembered as the year that killed the euro-skeptics? It certainly didn't begin that way.

Back in June, the people of Ireland stunned the world by voting down the Treaty of Lisbon, bringing the project of ever-closer European integration to a screeching halt. The failure of the Irish vote -- the only popular referendum on the treaty anywhere in Europe -- seemed to ratify the verdict delivered by French and Dutch voters in 2005 as they torpedoed the European Constitution: no more power for Brussels. 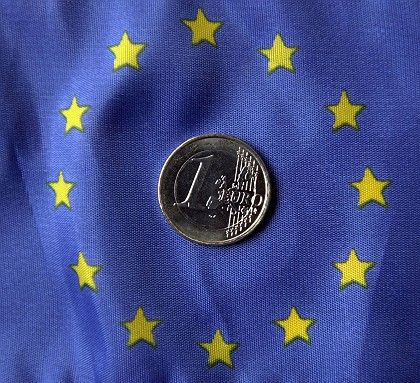 Will anything be left standing after the financial crisis? The EU and its currency are among the few winners.

Then, in August, the EU got another jolt when war broke out between Russia and Georgia. As conflict raged in the Caucasus, European officials struggled to come up with a unified response, underscoring tensions between member-states. The old-guard, led by France and Germany, sought to balance their affection for the newly-democratic Georgia with their dependence on Russian natural gas imports. At the same time, newer member states like Poland, for whom the experience of Russian intimidation was all too familiar, clamored for solidarity with Georgia. The EU looked weak and riven by internal conflict.

These days, though, such bickering seems like ancient history. Between summer's turbulence and today's reality, the New York investment bank Lehman Brothers failed in mid-September, sending the world into a financial tailspin from which it might take years to recover. But instead of sounding the death knell for what was an already flailing EU, the financial crisis has had the effect of breathing new life into a bloc that just a couple months ago looked deflated and defeated.

Now, from Iceland to the Czech Republic, previously wary populations are warming to the EU, heaping praise on the very Brussels-based behemoth they had spent so many years deriding.

Denmark and the Euro Effect

The most obvious way the financial crisis has strengthened the image of the EU among the less-than-faithful is by making the euro look like a safehaven. Denmark, one of the few countries that deliberately opted out of the euro, may now be regretting its decision. As Danish prime minister Anders Fogh Rasmussen told fellow party members at an annual conference in October, "the current financial turmoil makes it evident that Denmark has to join the euro," which he called a source of "political and economical stability."

Like its Scandinavian neighbors, Denmark has long taken pride in maintaining a degree of independence from Brussels. But now it seems that many are coming around to the view of the Prime Minister who argues that "not being a euro member has its costs."

For small countries like Denmark, those costs often come in the form of higher interest rates. Because Denmark keeps its currency pegged to the euro, in times of economic turbulence its central bank is forced to take drastic measures to prevent its local currency from depreciating. Right now, Danish interest rates stand at 5 percent, putting the country at a considerable competitive disadvantage to its neighbors in the euro zone countries, whose interest rates recently dropped half a point to 3.25 percent. Further cuts are expected.

As the Danish economy joins the rest of the continent in the march toward recession, those high interest rates will feel increasingly punishing. According to a report from Deutsche Bank AG, the Danish economy is set to shrink 0.2 percent in 2008 and 1.4 percent in 2009. Unemployment is on track to double in the next two years. High interest rates, which discourage the easy lending that helps to fuel growth, are salt in the wound.

A recent poll compiled by Statistics Denmark shows that a narrow 50.1 percent majority of Danes now favor adopting the euro. In a referendum in 2000, Danish voters rejected the euro by a seven point margin.

Still, Johannes Andersen, a political scientist at Denmark's University of Aalborg, cautions that we shouldn't attribute too large a role to the financial crisis in shaping Danish opinion. Although he says the prospects for a new Danish referendum on the euro in the next year are "quite good," Andersen says the rising stock of the euro in Denmark is more the result of a long-term trend than a sudden response to financial shock. On the left, in particular, Andersen sees a steady movement in Denmark toward a more EU-friendly position, particularly regarding the euro. In part, he explains the shift as a positive reaction to the EU's east-ward expansion. Now that the 27-member bloc contains many poorer states from the East, it's easier for left-wing politicians to frame affection for the EU as a progressive gesture.

But Andersen acknowledges that the financial crisis has affected the debate on the euro. "It used to be possible to be pro-EU and anti-euro," he told SPIEGEL ONLINE. Now, since interest rates started nosing upward, those already predisposed to be friendly to EU are likely to be pro-euro as well.

Of all the countries on Europe's periphery, perhaps none has experienced as pronounced a shift in EU sentiment as Iceland, a nation which, not coincidentally, also serves as Ground Zero for the financial crisis. Since January, Iceland's currency has lost nearly half its value against the euro, plunging the country's economy into chaos.

At the same time, opinion polling has registered a large shift in public attitudes toward the EU. According to a poll published on Nov. 24 by the Icelandic newspaper Frettabladid, 68 percent of Icelanders now favor joining the euro. Somewhat fewer, 59.6 percent, think the country should join the European Union, but that's still an 11-point jump from September of 2007, when only 48.9 percent of Icelanders wanted EU membership.

According to Gunnar Harraldson, director of Iceland's Institute for Economic Studies, the surge in EU support suggests that Icelanders have lost faith in their own government. "The system here is very rigid," he told SPIEGEL ONLINE, "and a lot of people don't trust Icelandic politicians." This is particularly true in the more developed south-eastern portion of the island, in and around the capital city, Reykjavik. The big spike in EU support has come from the educated middle-class, Harraldson stresses, a large segment of whom "would rather give power to Brussels" than risk financial oblivion. Rural populations, especially those involved in the country's sprawling fishing industry, remain wary of surrendering national sovereignty.

Ironically, precisely because of the country's "political rigidity," Harraldson doesn't see EU membership on the horizon for Iceland anytime soon. Even though the idea now enjoys broad support among the populace -- as well as broad support in Brussels -- key politicians in Iceland's Independent Party, the senior partner in the country's governing coalition, remain hostile.

The Independent Party has announced it will meet at the end of January to reopen debate on the EU issue, though it is by no means certain to change its position. Two months is a political lifetime in any country, and polling has already recorded a slight drop off in EU enthusiasm. In a poll taken in October, when the financial crisis still seemed fresh and scary, support for joining the EU climbed as high as 68.8 percent. As the intial shock wears off, support for the EU could erode further.

Still, should the crisis worsen again, the "join now" chorus could get louder. In Harraldson's view, most countries have historically joined the EU because of "some kind of crisis." For Iceland, the economic storm of 2008 might be the one that pushes it over the edge.

The Celtic Tiger Loses its Claws

By rejecting the Lisbon treaty in a referendum in June, the people of Ireland brought the EU to its knees. Now, after a bruising ride on the financial crisis roller coaster, they might be the ones that get the EU back on its feet.

The Irish economy used to be envy of Europe. Now it holds the dubious honor of beating all its peers to the punch by becoming the first to fall into recession. With jobs disappearing, migrants leaving, and total debt standing at an eye-popping 265 percent of GDP, Ireland can ill-afford the added burden of frozen credit markets. According to a report released last week by Ireland's Economic and Social Research institute, unemployment is expected to rise from 6 to 8 percent next year, with double-digits remaining a significant possibility.

Somewhere in economic storm, Ireland lost its fiercely independent swagger. Many are now saying the country might hold a second referendum on the Lisbon Treaty, expecting that this time the "yes" camp would have an easier time cobbling together a majority. A poll published on Nov. 17 by the Irish times showed that the Lisbon Treaty would pass if given another chance, with 52.5 percent in favor and 47.5 percent opposed. That represents a 12-point swing from the vote in June, which saw the treaty defeated by a margin of nearly 7 points.

Why exactly the financial crisis would cause the Irish to reconsider isn't entirely clear. Unlike Denmark and Iceland, Ireland is already a member of the euro zone. But Steven Collins, political editor for the Irish Times, says the financial crisis has "clearly" been the main factor in moving the debate. Just like in Iceland, the biggest movement in Irish opinion has been with the urban, educated middle-class. "It's ironic, really," Collins told SPIEGEL ONLINE, "because the working class are the ones losing their jobs, but it's the middle class that is paying close attention to the crisis." Although the urban middle-class tended to support the Lisbon Treaty before, they now do so in overwhelming numbers.

That doesn't mean a new referendum is a sure thing. Although Collins believes a new vote would have "good prospects" for passing, the "no" camp could score another victory if it can capitalize on discontent with the current government, which is deeply unpopular. The government in Dublin recently indicated it was going to put off a new referendum till next autumn, but Collins figures that whenever it happens, it will require support from the opposition to get through. Although the government could theoretically avoid another vote by passing most of the treaty through parliamentary means, it probably lost its opportunity to take this route when it decided to hold the June referendum.

The EU might not be out of the woods yet, but it is in a considerably stronger position heading into 2009 than many feared would be the case six months ago. This uptick in institutional strength comes at an especially important time.

In January, the rotating EU-presidency will shift from France, one of the most loyally integrationist member states, to the Czech Republic, historically considered one of most independent. Czech President Vaclav Klaus, a committed EU opponent, has made headlines several times this year for likening the EU to "a communist state" and for urging skeptics across Europe to unite in opposing the Lisbon Treaty.

But even in the Czech Republic, a new day might be dawning. Klaus's position as president is mostly ceremonial, and on Wednesday the highest Czech court removed a significant obstacle for the Lisbon Treaty by declaring the agreement to be compatible with the Czech constitution. If the Czech parliament manages to push it through, the treaty would still need Klaus's signature for final approval.

Even the cantankerous Klaus has indicated in the past that he would sign the document if the Czech Republic were the only country left holding up the treaty's ratification. That would seem to throw the ball back into Ireland's court, but the Irish economy continuing to tank, the world may soon get to call Klaus's bluff. Europe's dream of ever-closer union might be happen sooner than we think.