German Chancellor Angela Merkel was visibly relieved. She broke into a smile when the result of Friday's vote on the euro rescue package was read out in the Bundestag, the lower house of parliament. She clapped her hands a few times and then, together with Foreign Minister Guido Westerwelle, walked from the government benches over to where her party's parliamentary leader, Volker Kauder, was seated. They exchanged a few words -- perhaps she was thanking him -- and then Merkel took her bag and left the floor alone.

Merkel had achieved her goal. The Bundestag had just approved the euro bailout plan and paved the way for German loan guarantees for up to €148 billion ($185 billion).

Achieving this victory was not something she had taken for granted. She seemed tense during the hours of debate leading up to the vote. A number of members of parliament from her party, the conservative Christian Democratic Union (CDU), its Bavarian sister party, the Christian Social Union (CSU) and its coalition partner, the business-friendly Free Democratic Party (FDP), had expressed doubts about the bailout plan, and several politicians had been absent from the vote due to illness. Could the coalition still garner a majority of votes? In the end, it did, with the relatively tolerable blemish of only 10 "no" votes or abstentions among coalition members of parliament.

But even if Merkel was spared embarrassment last Friday, the nail-biter in parliament was symptomatic. These are tough times for Angela Merkel, the toughest, in fact, she has experienced in her four-and-a-half years as German chancellor. She has never seemed this lonely and beleaguered. Merkel is losing the confidence of voters, the approval ratings of her center-right CDU/FDP coalition have slumped to around 40 percent and more than 50 percent of Germans are dissatisfied with their chancellor.

She has few friends left in Europe at the moment. The days are over when Merkel was feted at EU summits for her diplomatic skills. In the negotiations over aid for Greece she stubbornly resisted a rapid agreement, often resorting to a shrill tone that made her unpopular with the governments of many EU member states.

Merkel is no longer the celebrated euro star. After blocking a rescue deal for Greece for months, she is now forging head with calls for a new "culture of stability" that some EU partners regard as unwarranted lecturing. In addition, France, Germany's most important partner in Europe, was annoyed at Germany's unilateral ban on naked short selling last week. One should "at least consult other member states first," said French Finance Minister Christine Lagarde.

Merkel's new-found enthusiasm for a financial transactions tax, something she long resisted, has been met with a mixture of surprise and suspicion in Europe. The move, many observers believe, is primarily aimed at helping to restore her flagging popularity at home.

Merkel has "botched" her responsibility to deal with the euro crisis in recent months, former Foreign Minister Joschka Fischer said in an interview with SPIEGEL this week. "Germany is more isolated in the EU than ever before but we Germans are still bearing the brunt of the financial burden while the French president is being celebrated for it," said Fischer. "That's really first-class statesmanship! I can't remember anything as embarrassing as this happening since 1949."

Her loss of confidence abroad is coinciding with declining support in Germany. Her domestic power base has started to crumble. She isn't just facing sharp resistance from the opposition -- her own coalition is increasingly divided as well. The FDP feels neglected, there is growing unrest in the CDU/CSU parliamentary group and state governors from her own party have started sniping at her.

Growing Criticism From Own Ranks

The latest salvo has come from the southern state of Bavaria. The governor of Bavaria, CSU leader Horst Seehofer, has attacked Merkel with a ferocity that resembles a declaration of war. "There are times when I really have to control myself so that I don't fly off the handle," he told the daily newspaper Süddeutsche Zeitung last week. He also suggested that he might not be as likely to hold back in the future.

And as if to prove that his threats were more than just words, Seehofer promptly joined Hesse Governor Roland Koch, a member of the CDU, in the upper house of parliament, the Bundesrat, in opposing the government's plans to increase financial aid for students. In the days following the conservatives' dramatic defeat in the state election in North Rhine-Westphalia on May 9, Koch had already placed himself at the head of a group of disgruntled CDU governors.

The CDU/CSU members of parliament are not venting their anger quite as openly. Nevertheless, there is palpable resentment among them at being asked to approve a second huge bailout within just a few weeks. "When we look at the increasing number of decisions that are being portrayed as being without an alternative, we are left with no room to maneuver whatsoever," CDU domestic policy expert Wolfgang Bosbach warned in the weekly news magazine Focus. CSU lawmaker Peter Gauweiler, who voted against the bailout package on Friday, says: "If we're told that there are no alternatives, we might as well abandon politics altogether. Politics, in fact, means setting directions."

The opposition already feels that the Bundestag has been degraded to a rubber-stamping body. In Friday's parliamentary debate ahead of the vote, SPD Chairman Sigmar Gabriel vented his fury by launching unusually sharp attacks. He accused Merkel of having "no line and no goal" and of playing tactical games that her EU partners were tired of. The chancellor, Gabriel said, had embarrassed herself internationally. Referring to her first term as head of a grand coalition between the CDU and SPD, he said: "You were a courageous chancellor only while you were being watched over by Social Democrats."

Merkel could easily have greeted such attacks from the opposition with a wan smile, but she was noticeably uneasy during Gabriel's comments, fidgeting in her chair. The attacks have hit home because there is a kernel of truth to them.

The references to the grand coalition have also had their effect on Merkel. She knows that she has severely strained relations with her current coalition partner, the FDP, by trying to secure SPD support for the Greek bailout and the euro rescue plan.

Merkel's relationship with Foreign Minister Guido Westerwelle, the head of the FDP, gives an indication of the tensions within their coalition. In recent weeks, there has been no evidence of the Merkel/Westerwelle duo. "In the past, there was the Merkel/Müntefering axis," says one FDP member, referring to Merkel's cordial relations with former SPD leader Franz Müntefering in the days of the grand coalition. "But where exactly is the axis in the current coalition?" Officially, the relationship is described as "collegial and friendly," which doesn't exactly sound euphoric.

On Friday afternoon, Merkel held a press conference with Britain's new prime minister, David Cameron, who was on an inaugural trip to Berlin after having visited Paris on Thursday. Even though they have an array of differences on Europe, she seemed pleased to be standing side by side with a new Conservative head of government. Perhaps Merkel identified with Cameron, who like her has formed a coalition with a smaller liberal party. It was a first for Britain, where only one party at a time has consistently controlled the government since World War II. For the first time, says Merkel, she was now able to discuss coalitions with a British prime minister.

She couldn't have had much good news to report to Cameron. 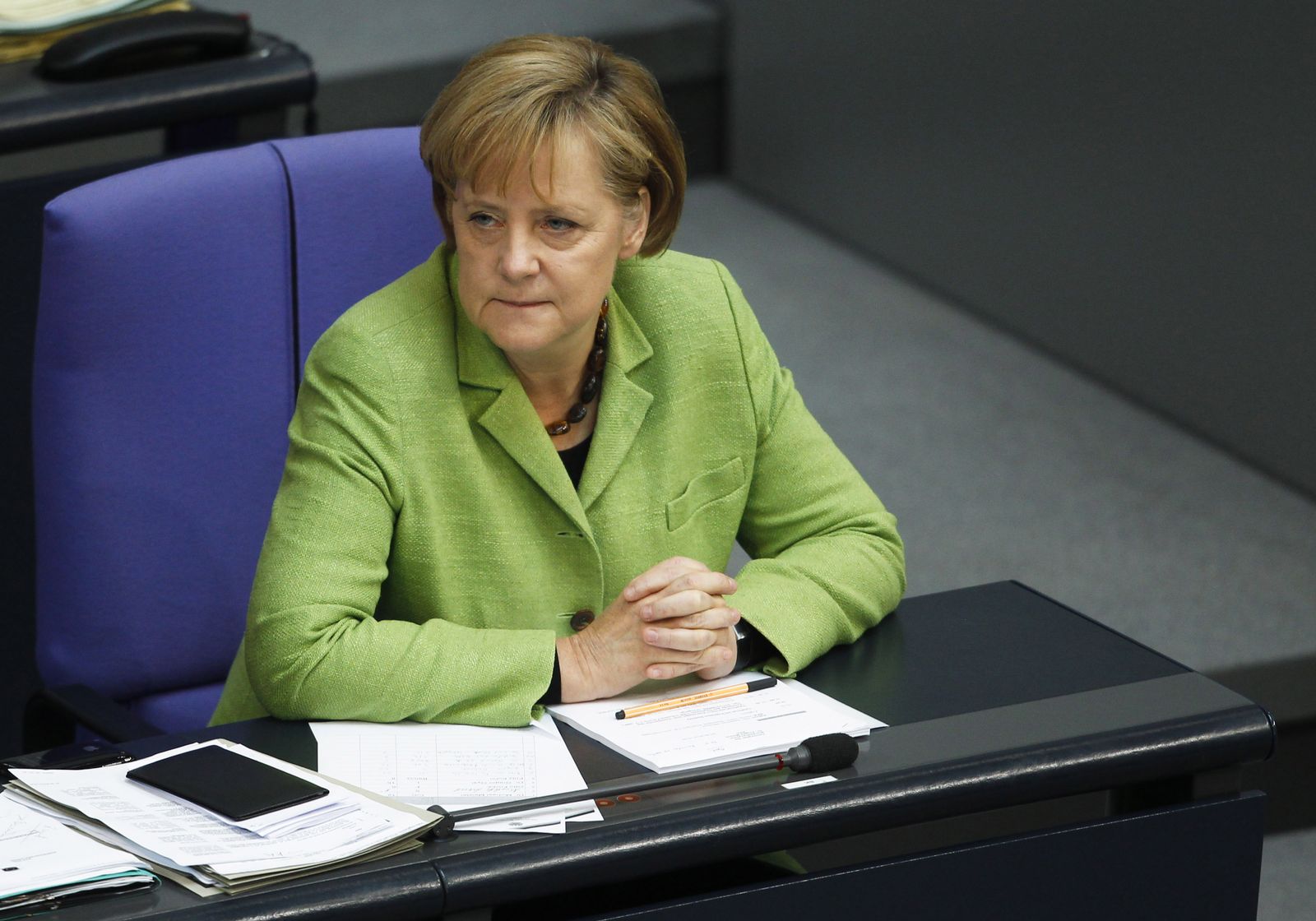 These are hard times for Angela Merkel.