Those looking for the best football players in the world need go no further than Spain, where both Christiano Ronaldo and Lionel Messi -- the last two winners of the Ballon d'Or -- are under contract.

The most successful clubs, in turn, play in the English Premier League. Indeed, three of the four semi-finalists in the 2009 Champions League were English teams. 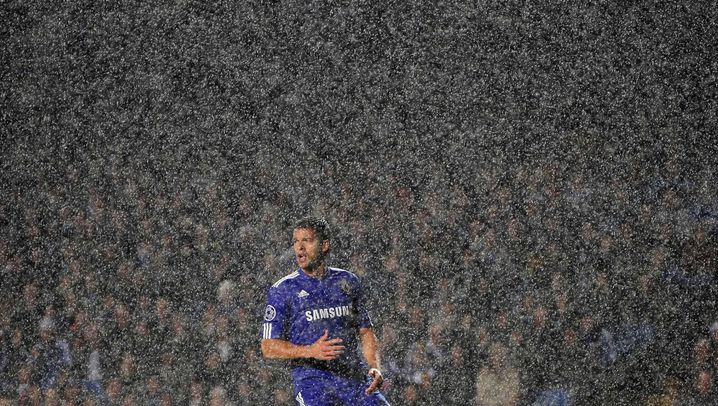 And Germany? The German Bundesliga has Bayern Munich -- and not much else. It has now been nine long years since a Bundesliga side won a European competition, eight since a German team even made it to a semi-final and internationally known players are a rarity.

That, though, may soon change. New Financial Fair Play regulations recently proposed by UEFA, European football's governing body, could significantly alter the current hierarchy in European football. The idea is to impose penalties on those clubs that live and play far beyond their fiscal means. Book-balancing leagues such as the German Bundesliga could emerge as the greatest beneficiaries of such reforms.

The Very Brink of Bankruptcy

"The cake is going to get smaller," Wolfgang Holzhäuser, chairman of current Bundesliga frontrunner Bayer 04 Leverkusen, told SPIEGEL ONLINE. "Everything will become a little more equal. More star players will come to the Bundesliga."

At issue is debt. During the last decade, several teams in Europe have spent astronomical sums to secure stars and, through them, success. In doing so, however, several teams have slid to the very brink of bankruptcy. According to UEFA, the situation is neither fair nor sustainable. The new rules under consideration would require teams to limit debt, rein in spending and balance the books. Otherwise, they may face stiff penalties.

In other words, UEFA wants European teams to become more German. Many of the new Financial Fair Play regulations -- which are currently circulating among European clubs to familiarize them with the potential new regime -- are based on rules already in place in the Bundesliga. And they are coming not a moment too soon.

Holzhäuser's team was the last German club to appear in the final of a European competition -- way back in May 2002, when thrifty Leverkusen lost to Real Madrid. The team from the Spanish capital has long been famous for its spending excesses and that night saw one financial model beat out another.

The trend extends throughout Europe, from metropolitan star ensembles to backwater amateur outfits. A UEFA study due out this month found that of the 650 clubs surveyed, 50 percent incurred losses every year. One in five teams spent at least 120 percent of their revenue annually. Rising player salaries have only compounded the problem, with many clubs spending more than 70 percent of their revenue on wages.

Consequences of the profligacy are mounting. Belgian first division club Excelsior Mouscron went bankrupt in December. Premier League clubs Portsmouth and Westham could soon follow suit. And money from overseas has not always helped. US businessman Malcolm Glazer bought Manchester United in 2005, and promptly signed the debt he incurred in the purchase back over to the club.

The boom in the Premier League has largely been funded by such buy-outs. Chelsea was bought up by Roman Abramovich in 2003, marking the beginning of an unparalleled spending spree. Five years later, Sheikh Mansour bin Zayed Al Nahyan of Abu Dhabi bought Manchester City and spent over $200 million on players his first year. Those who want to compete have had no choice but to open their wallets as well.

It is a problem that UEFA's new Financial Fair Play regulations seek to address. A first draft states that such overspending "may be sustainable for a single club, but it may be considered to have a negative impact on the European club football system as a whole."

Bundesliga Chief Financial Officer Christian Müller argues that this passage captures the essence of the Financial Fair Play concept. "It acknowledges the systemic effect the behavior of a single club can have," he says. The richest clubs drive up players' salaries and transfer costs, forcing smaller clubs to overstretch their budgets to compete.

Knocking Out the Small Clubs

Wolfgang Holzhäuser of Bayer Leverkusen agrees. "The current system ultimately leads to the big clubs knocking out the small ones," he says.

The Financial Fair Play rules are modelled, at least in part, on already existing Bundesliga regulations. And it's no wonder. While teams in the Spanish Primera Division are a combined €5 billion in debt, as are their counterparts in the English Premier League, Bundesliga team debt, when added together, is just €700 million.

The German league checks the health of its teams annually, with those found wanting forced to open their books a second time. Teams must demonstrate an ability to pay their bills through the next season and may not go into debt to pay player transfer fees.

"The Bundesliga is the forerunner," Müller says. "We don't need to lament that we can't compete internationally. Financial solidity is more important to us than glamour and superstars."

The new UEFA rules envision penalizing clubs that repeatedly spend more than their generated revenue. Teams that regularly incur losses could even face expulsion from European competitions, according to UEFA. Clubs will still be allowed to carry debt. But high interest payments could drag balances into the red, meaning the new regulations will encourage indebted clubs to scale down their spending.

The result could be a bright future for Germany. "Progressively, players of high quality will be choosing the Bundesliga," Müller says hopefully. "Players throughout the world know: Our teams pay well, and they pay on time."

Still, the draft regulations have not yet been made mandatory. While European clubs will not be able to veto the plan outright, they are heavily involved in consultations. Müller, for his part, says he thinks the rules will eventually be adopted.

Whether enforcement is practicable, however, remains an open question. Holzhäuser says that expelling teams from European competitions "works in theory, but not in reality." Indeed, UEFA's most indebted teams tend to be the ones that draw the largest audiences to UEFA competitions.

Müller also deems such penalties unlikely, instead choosing to believe that clubs "will adapt to the new situation over time." But even that seems unlikely, at least until rules are finalized. It remains to be seen, for example, whether club owners will be able to buy up the debt their club has incurred. Last December, UEFA publicly congratulated Chelsea owner Roman Abramovich when he converted his club's substantial bank debt into private equity. But speaking to the Associated Press in January, UEFA General Secretary Gianni Infantino said, "it will not be possible for the big sugar daddy just to write off a check at the end of each season."