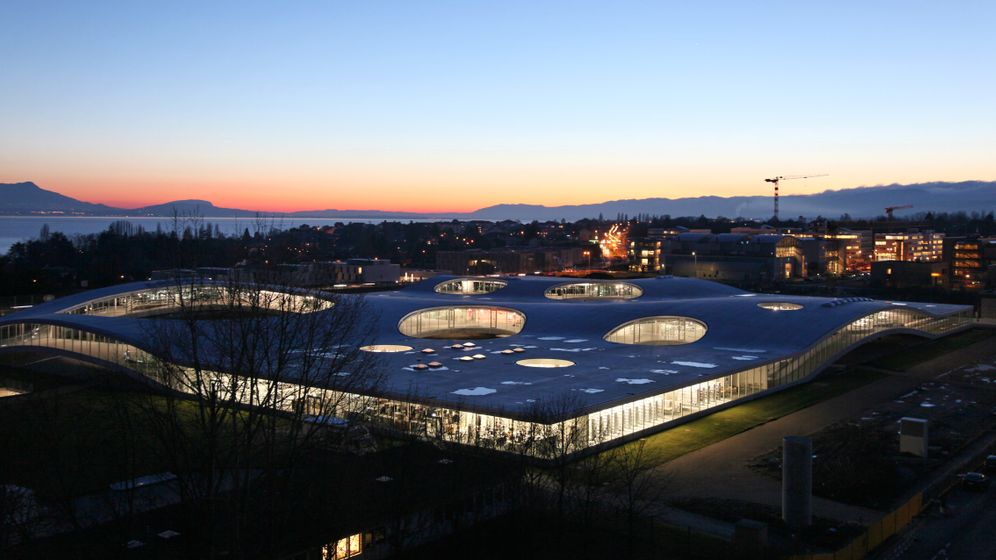 A building appears to hover, cloud-like, on the northern shore of Lake Geneva. This is the new library of the Swiss Federal Institute of Technology in Lausanne, a futuristic expanse of glass and concrete.

The Rolex Learning Center, as the complex is officially known, draws together the libraries of 10 separate academic departments into one new central location. Here, studying alone among steel shelves is a thing of the past. Instead, this library of the future is meant to be a marketplace for ideas.

The difference from traditional libraries is already evident in the entranceway, which has glass cases displaying electronic gadgets made by Logitech and walls bearing oversized Rolex watches, in a nod to the library's funders.

A café sells fresh croissants and newspapers in English, French, Arabic and Chinese. A bookstore sells Tintin books and kitschy postcards. The complex even boasts an upscale restaurant.

Disabled-accessible paths, curving like ski slopes, meander through the building. The windows open automatically when the air grows too stuffy. And when they do, sparrows get in and swoop around the colorful beanbag chairs where students doze and chat. Couples flirt beneath designer lamps made by Artemide.

The only things you rarely see here are, well, books. Indeed, the whole setup seems designed to send visitors a message that learning is fun, not laborious.

The Next Big Thing in Architecture

"Never before have so many libraries been built," says Winfried Nerdinger, a professor of architectural history in Munich. Nerdinger recently organized an exhibition on libraries past and future called "Wisdom Builds Itself a House."

The libraries of the new millennium are often grand, cathedral-like constructions, meant to demonstrate a city's readiness to face the future. The book accompanying the Munich exhibition notes: "The list of builders behind the spectacular libraries constructed in recent years reads like a who's who of architecture." Herzog & de Meuron, for example, developed a curving, amoeba-shaped honeycomb of a library in the German city of Cottbus, with a candy-colored interior. Santiago Calatrava created a new library in Zurich, Zaha Hadid in Vienna, Rem Koolhaas in Seattle and Toyo Ito in Tokyo.

Even China has gone in for a modern super-library. German architects expanded the National Library in Beijing with an extension that also seems to float. The glassed-in lower portion is hardly recognizable as a foundation on which the rest of the building sits, while the upper section resembles a giant computer hard drive. The building has room for 12 million books.

Kazakhstan is hoping to gain prestige with a new national library, as well. The building in Astana, the capital, resembles an endless Moebius strip, seemingly without a beginning or end. It's a book lover's fata morgana, financed by the former Soviet republic's oil and gas revenues.

Focusing on Users, Not Books

It's a paradoxical trend, and one not without its ironies, especially since it comes at a time when digital books are replacing traditional ones. Amazon, the American online retailing giant, now sells more e-books than printed ones. The trend has its consequences for these new libraries as well, which are becoming multimedia meeting places.

The Rolex library provides an extreme example of the transformation of a library into a kind of center for new experiences. In fact, if it went any further, it would be an amusement park.

"We've created something like a Disneyland of knowledge here," says David Aymonin, the man who oversaw construction of the Rolex Learning Center, with an ironic smile. "We librarians are no longer beholden to the books as much as to the users."

As Aymonin sees it, the construction of so many libraries can be attributed to the fact that books are being digitalized and students are spending fewer years completing their studies. "Many students spend a large part of the day here," he says, "and so we meet many of the students' basic needs: food, rest, shopping and, of course, access to the books they need for their courses." During exam time especially, demand doubles for books, food and coffee.

Still, departing from a tradition of libraries that resemble monasteries also has a downside. Tourists come by frequently to snap pictures of the building and catch a glimpse of the future. "Sometimes we feel as if we're in a zoo," Aymonin says.

While the Rolex Center embodies the concept of an extroverted library, the Grimm Center at Berlin's Humboldt University is the polar opposite, inspiring reflection, calm and concentration. Still, the building's architectural highlight is a terraced reading room with 300 Wi-Fi-equipped workstations. Here, hundreds of narrow, symmetrically arranged windows resemble a shelf of lined-up books.

In late October, an even more introverted library will open in the southwestern German city of Stuttgart. The new city library is an elegant study in shapes, a cube on the outside with a funnel shape inside. Critics have derided the Spartan building as a "bunker" or as "Stammheim II," in reference to a high-security prison on the outskirts of Stuttgart.

But South Korean architect Eun Young Yi is undeterred by the criticism, saying that humans need more than just the playfulness of commercial spaces. He has given his design an additional element, as well: a large and completely empty "room of silence" in the middle of the building.

Sometimes the most interesting books are found where one isn't necessarily looking for them, says Rem Koolhaas. The avant-garde Dutch architect designed a "library of the future" in which sections such as "economics," "law" or "medicine" were replaced with prosaic categories such as "parking," "personnel," and "office." The 12-storey Seattle Central Library sits like a sphinx with unconventional parts, enthroned as a new landmark above the city center. With its open form, jarring colors, and plush Starbucks-style comfort, it could be viewed as a kind of counter-project to Berlin's Grimm Center. Libraries are changing. Fortress-like book treasuries are morphing into service-oriented culture centers.

The designers of the Bibliotheca Alexandrina in Egypt have also chosen a radical path. Here, on the site where the ancient world's most important collection of knowledge burned down some 2,000 years ago, a modern, high-tech palace has risen in its place. "We are born digital," says Ismail Serageldin, the library's director.

Printed books hardly play a role in Alexandria's modern-day library. With its treasures stored on servers rather than shelves, it is considered a prime example of a digital library.

Serageldin, who used to work at the World Bank, now raves about the opportunities that digital libraries afford, saying: "Dead texts come alive!"

But because users still need somewhere to read texts, even if they're online, virtual libraries can't do without a brick-and-mortar building. Cafés often lack the necessary network connections, while using laptops outside in the sun often creates screen glare. The result is that digitalization is actually contributing to the demand for more public reading rooms.

At the same time, some question whether laptops really are beneficial to student learning. "If you have a book in front of you, it's easy to hold a discussion over it, but a laptop screen is a visual barrier that separates people from each other," says Frédéric Kaplan, who conducts research on the future of reading with educational specialists and programmers at the Rolex Center. "We want to replace the personal computer with an 'interpersonal computer,'" he explains.

Kaplan stands in front of a robot that can project graphics and text onto a tabletop. His dream is to create databases that can be explored by multiple users together by manipulating the images directly on the tabletop.

"Book learning is something anyone can acquire individually, but applying it is something we only learn through discussion with others," Kaplan says. "Here, we're researching how to foster intelligent discussions."