If possible, anyone hoping to get a feel for Russia's new wealth should avoid traveling by train. Indeed, Russia might have the world's second-largest railway system, but it still needs a lot of work.

Worn down rails and a museum-quality rolling stock attest to decades of ideological wandering, which began when Vladimir Lenin embarked on a memorable train journey in 1917 from Switzerland to Petrograd, where he took over as the leader of the Bolshevik Revolution. Russia's new elite depends on fleets of private aircraft to travel around the country.

Grundmann is the head of the Munich-based group's transportation division, and he is clearly doing his best to treat Russian Railways (RZD), the state-owned railway company and Siemens customer, with the polite deference of a well-trained conductor. Beginning in December, five Siemens-made ICE 3 high-speed trains will commence scheduled passenger service between Moscow and St. Petersburg, where they will be joined by three more by the beginning of next year.

The trains -- dubbed "Sapsan," the Russian word for a peregrine falcon -- have been modified to travel on the country's broad-gauge tracks. And thanks to special insulation and other modifications, they can operate in extremely cold temperatures.

Siemens' latest export coup represents yet another triumph over the French company Alstom, which produces the TGV high-speed train. Russia has now joined Spain and China in voicing its preference for Germany's far more sophisticated version. For example, it features an under-floor power train, while the TGV is still propelled by end cars using the old locomotive principle. This lets the ICE 3 trains have more room and 20 percent more seats than on traditional trains of equal length.

But these railcars are also the most expensive in Siemens' lineup. Russia will have to pay about €35 million ($52 million) for each train -- an investment that makes about as much sense as driving a Ferrari on a dirt road.

The "falcon" will bump along on an old, only slightly improved stretch of rail between St. Petersburg and Moscow. It will complete the 650-kilometer (406-mile) route in 3 hours 45 minutes at an average speed of 173 kilometers per hour (107 miles per hour). A standard express train would complete the journey in the same amount of time -- and at half the cost. The Russian example demonstrates, once again, that even the most advanced train is still only as fast as the tracks it travels on.

Still, fans of the Russian railway system can be comforted by the fact that only one country in Western Europe has taken this realization to heart and implemented the necessary transportation policy. France is the only country with a nationwide system of high-speed tracks, on which even relatively ordinary trains can clock sensational travel times. For instance, the TGV completes the 750-kilometer Paris-Marseilles route in about three hours. To let its trains achieve such record speeds, the French government had to invest huge sums in to upgrading the country's railway lines. And while new trains cost millions, new lines cost billions.

Germany does not have a similarly high-performance track network yet. The ICE reaches speeds of up to 300 kilometers per hour on certain high-speed stretches, such at the one between Frankfurt and Cologne, but Russian conditions often prevail elsewhere. Nowadays, the travel time by rail between major cities, such as Hamburg and Cologne, is hardly any shorter than it was in the days of Kaiser Wilhelm.

The Siemens train is being used more appropriately in Spain, where it hurtles along most of the 630-kilometer Madrid-Barcelona route -- which Grundmann calls "magnificent" -- at 300 kilometers per hour. It is also even expected to reach speeds of 350 kilometers per hour soon, which would be a world record for scheduled rail operations.

Since the distance between Madrid and Barcelona is almost the same as it is between Moscow and St. Petersburg, the Spanish route is particularly helpful as a benchmark for the Russian system. The Spanish ICE (known there as the AVE S 103) completes the trip in only two and a half hours.

Vladimir Zinner, the engineer in charge of the Russian railway line, says that Russia will try to reach the same speeds and times as in Spain. But, he admits, these can only be achieved by constructing a new corridor through partly marshy terrain -- and with a different power supply system.

On the current route, the train is powered by a 3,000-volt direct-current line. This voltage is too low for a train traveling at very high speeds. The extremely high levels of power needed by the trains to reach these speeds would cause their transmission elements to overheat.

The Sapsan reportedly reaches speeds of 250 kilometers per hour along a short segment of track under standard operating conditions. Engineers have driven the train at higher speeds in order to figure out when things become unsafe. They called a halt to the experiment at 281 kilometers per hour -- a new Russian railway speed record.

In fact, they are less concerned about the tracks than the pantographs -- the devices that collect the electric current from overhead lines -- where impressive electric arching has occurred. Project engineer Mathias Merta uses the example of electric arc welding to illustrate the problem. "At some point," he says, "the thing is just simply burnt off." 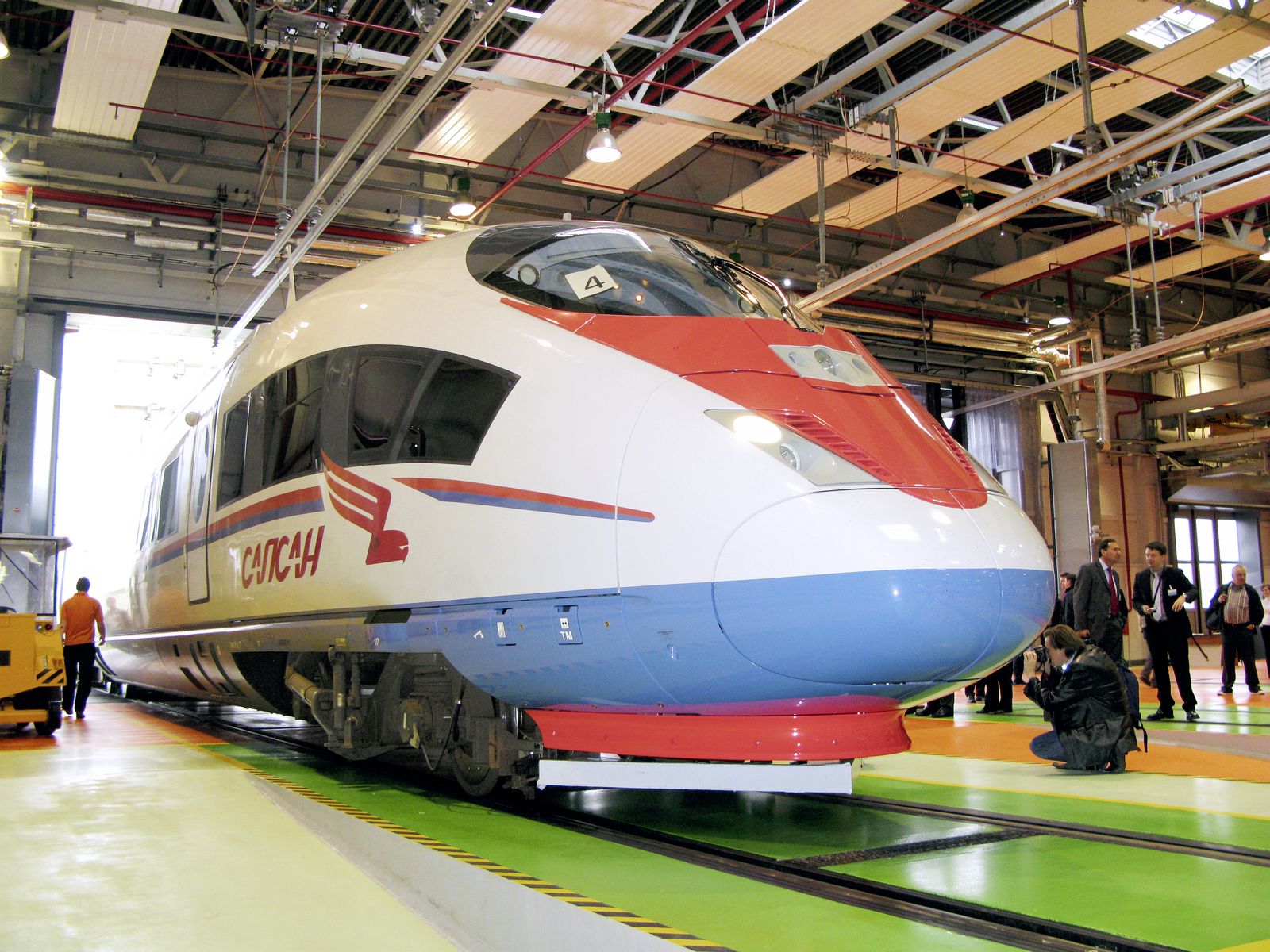