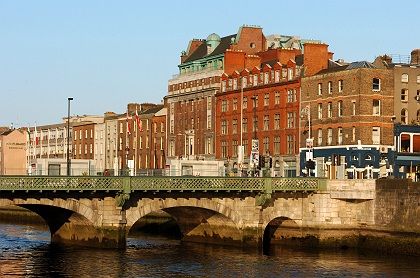 Irish voters are still unsure how the Lisbon Treaty will benefit them.

When their entry Dustin the Turkey crashed out of the semi-finals of the Eurovision Song Contest last week, some in Ireland could have been forgiven for thinking it was final proof that their country was losing influence in Europe.

Opposition leader Enda Kenny looked on the bright side, saying Dustin may have been "gobbled up" by the opposition but Ireland just needed to vote 'Yes' to the Lisbon Treaty to ensure it had a presence at the heart of Europe. The question now is whether Irish voters are quite so enthusiastic for Europe or are on the verge of giving the EU Reform Treaty nul points in two weeks time.

The future of the European Union now hangs on how the voters in this small country on the far western edge of Europe vote on June 12. And with less than two weeks to go to polling day, the referendum debate has been hijacked by issues that have little to do with the Lisbon Treaty. While many have accused the campaign against the treaty of being aggressive, populist and misleading, the reality is that it has also been pretty successful.

The latest opinion poll has the 'Yes' camp inching ahead, but only a bit. A poll published in Ireland's Sunday Business Post showed that 41 percent were now planning to vote for the treaty, up 3 points from the previous poll. However, the 'No' side had seen a bigger increase, jumping 5 percent to 33 percent. With a full quarter of the electorate undecided, the spectre of a repeat of France and the Netherlands' rejection of the European Constitution in 2005 is looming.

In the end the Lisbon Treaty, which replaced that constitution and which is designed to make the workings of the EU more efficient and coherent, could fall victim to the prevailing economic uncertainty that has now begun to touch Ireland.

The Irish "Celtic Tiger" is losing its teeth as the global financial crisis begins to eat away at job security and leaves many people shouldering the burden of huge mortgages and worrying about their financial future. In addition Irish farmers are riled at EU plans to open up Europe markets to global trade, so much so that many farmers are threatening to reject Lisbon.

No More Checks from Brussels

Ireland, the only country that is legally required to hold a referendum on the treaty has long been regarded as one of the main beneficiaries of EU membership. For years hand outs from Brussels helped Ireland build up its infrastructure. This combined with high investment in education and Ireland's attractiveness to American companies as a low-tax, English-speaking base paved the way for the economic boom that lasted from the mid-1990s until recently.

But the checks are no longer coming from Europe and Ireland's love affair with the EU may have waned. After all this is the country that rejected the Nice Treaty, the agreement that essentially paved the way for enlargement back in 2001. The referendum had to be held a second time before the treaty passed. "That showed a lack of respect for the will of the people," says Peadar Ó Broin of the Dublin based Institute of International and European Affairs (IIEA), a think tank. It seemed to many a "cynical rejection of democracy."

This time around many issues are muddying the waters. From Ireland's political neutrality, to its ban on abortion, to its low corporate tax rates, the 'No' campaign seems to have successfully focused on what Ireland might lose, while the pro-Europe campaign has found it more difficult to argue what is specifically to be gained from the treaty.

The only mainstream political party to oppose the treaty, Sinn Féin, has been raising fears that Lisbon could somehow open the door to tax harmonization, forcing Ireland to give up its low corporate tax rate that has lured so many foreign companies to the country. EU Commission President Jose Manuel Barroso was forced to rush to Dublin in April on a mission to convince voters that Ireland would still have a veto on tax issues.

"Now is the time to play on the fears of a vulnerable electorate," says Ó Broin of the IIEA. He points to the prevailing fears of an economic slowdown in Ireland. "There is a negative atmosphere now that the boom is over. The Celtic Tiger is gone," and people don't want to do anything that will change the status quo.

Brendan Butler of the Irish Business and Employers Confederation (IBEC) told SPIEGEL ONLINE that the 'No' side is casting doubts with "red herrings and myths." "The issues are quite murky. People can't really get a clear sense of what the treaty is about."

Butler points to the example of pamphlets that claimed that Brussels would be able to decide how many children people can have or the fear that abortion would be made legal. Abortion is banned in this predominantly Catholic country, except in cases where the mother's life is in danger. Ireland was given a guarantee way back in 1991 when it signed the Maastricht Treaty that this ban would be secure. That didnt stop a Catholic newspaper recently featuring an ad pleading for devout voters to reject the treaty on the grounds that it would "create a new European identity based on radical secularism and atheistic philosophies."

On Thursday Ireland's bishops tried to quell these fears and condemned those introducing "extraneous factors" into the debate. Archbishop of Dublin Dr. Diarmuid Martin told reporters: "I do not believe that this treaty changes the current position" on abortion. He also called on the country's political community to show "stronger leadership," and to explain and ensure that citizens have enough knowledge to help them decide "in favor of the common good of Europe."

'The Larger States Have Made the Greater Concessions'

Admittedly the Lisbon Treaty is a complex and often convoluted work, really a series of amendments to existing treaties. Ireland's current EU commissioner, Charlie McGreevy, recently quipped that "no sane person" would read it. However, the Referendum Commission, an independent statutory body set up to provide impartial information in advance of any referendum, has taken a stab at explaining it to the electorate. Its easy-to-read guide to the salient points of the treaty landed in the post box of every household and the commission has already explained that Lisbon will not affect Ireland's neutrality or taxation.

Although the vast majority of establishment Ireland is backing the treaty, including business leaders and trade unions, the 'Yes' campaign still hardly made things easy for themselves. A row between the various parties blew up last weekend with Brian Cowen, Ireland's somewhat abrasive new prime minister, lashing out at opposition parties for not been pulling their weight in the campaign.

John McGuirk, of Libertas, a group campaigning against the referendum, says the 'Yes' campaign has tried to present the treaty as a "bland soft package that doesnt affect anyone." Libertas is focusing its campaign on the so-called "democratic deficit" in Europe, which McGuirk argues will actually be deepened and entrenched by Lisbon. "The president and commissioners represent 500 million people and never have to ask anyone for a vote," he told SPIEGEL ONLINE. He said the increase in policy areas where majority voting will apply as well as the loss of a permanent commissioner would not be "a good deal" for Ireland. "It is like Turkeys voting for Christmas," he said.

Libertas activists believe the treaty leaves the big countries firmly in the driving seat. "France and Germany along with two other states could block any legislation. That is not good for smaller countries." IBEC's Butler disagrees. "We knew we had to reduce the number of commissioners  It's more important to have decent portfolios than every country having a commissioner." And he argues the new voting procedures are actually weighted in favor of smaller nations like Ireland. "The larger states have made the greater concessions."

While Libertas may argue Ireland could renegotiate a better deal, the tone coming out of Brussels is very different. The message is: there is no Plan B. On Monday Barrosso warned that if Ireland rejects the treaty: "We will all pay a price for it."

The irony would be that the process of further integration that began with the European Constitution that was hammered out during Ireland's 2004 EU Presidency, would see its downsized version -- the Lisbon Treaty -- perish at the hands of the Irish.

One group of voters that could make a big difference in the June 12 vote are farmers. This group, normally very pro-European, is accusing EU Trade Commissioner Peter Mandelson of trying to destroy the Irish agricultural industry. The World Trade Organization wants to remove many of the long-standing restrictions on international commerce in agriculture, and Madelson is expected to try to reach a compromise deal at the next WTO ministerial meeting at the end of June. The Irish farming community is vehemently opposed to his proposals to open up Europe to more agricultural imports.

Irish Farmer's Association spokesperson Niall Madigan told SPIEGEL ONLINE: "The proposals will wipe out our livestock sector. By our analysis, 50,000 farmers will be out of business and another 50,000 jobs in the food processing industry will be lost." Madigan claims Mandelson is essentially going to tear up the Common Agricultural Policy that governs farm production in Europe. "One arm of the EU is urging us to vote yes (to Lisbon), and the other, the commissioner, is trying to wipe out what we have."

While these resentments might have little to do with the Lisbon Treaty, they could still jeopardize it. According to an opinion poll released Thursday, four out of every 10 farmers are planning to vote 'No' while only two in 10 are voting 'Yes,' the rest are still undecided.

This is significant. The IFA is heeded not only by farmers but also rural constituencies and what Ó Broin describes as the "newly urbanized who have sympathies with farming communities." Butler warns the farmers against the making the mistake of rejecting Lisbon ahead of the ministerial talks. He says IBEC also has concerns about the WTO meeting but says: "Our people will stand a better chance with the warm wind of the 'yes' vote at their backs, than the cold and rocky turbulence of a 'No' vote."