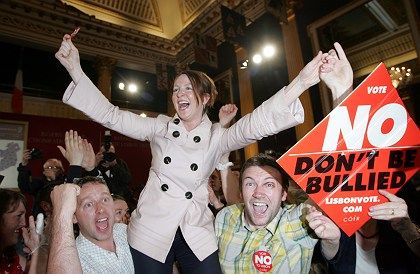 Supporters of the "no" vote celebrate in Dublin after the Lisbon Treaty was rejected.

Lunching with Gordon Brown is never much of a pleasure. The hapless British prime minister is known to be cranky and brusque -- the polar opposite of Tony Blair, who always seemed to be wearing a smile.

Until Friday, French President Nicolas Sarkozy was still hoping that hed have an opportunity at his upcoming lunch with Gordon Brown to crack a few jokes with his colleague. Sarkozy had invited the prime minister to Paris just before the two-day European Union summit of European heads of state and government to discuss possible candidates for the EUs top political posts. The Treaty of Lisbon, which has already been ratified by 18 of the 27 member states, envisions creating a number of top posts, including an EU president and a high representative for foreign affairs.

But as the news came early Friday afternoon that the Irish had rejected the treaty in a national referendum, any hope of a pleasurable lunch faded. For now, there will be no treaty, no new jobs and instead of discussing peoples future careers, Sarkozy and Brown will have to practice a bit of continental crisis management.

After six years of work on the text, endless negotiating rounds with 27 editors at the table, countless requests for changes and suggestions for improvements, the EU finally seemed close to achieving its goal. The 27 member states were united in their desire to create something that looked a lot like an EU constitution.

Following a long journey through the EU institutions, the name of the text had been changed from the EU constitution to the more harmless-sounding Treaty of Lisbon. Still, the treaty, which to a large degree had been shepherded through by German Chancellor Angela Merkel, appeared to have the power to streamline EU decision-making and to give it a single voice to the outside world by creating a position equivalent to an EU foreign minister.

But that didnt happen. Now everything is up in the air once again. The 860,000 "no" voters in Ireland have blocked the path of a half-billion Europeans. In any case, the treaty will no longer be able to go into effect as planned on January 1, 2009, lamented Luxembourgs prime minister, Jean-Claude Juncker. And no one can say for certain now whether it will be possible to overcome the blockade.

This is an utter disaster, one diplomat at the French Foreign Ministry commented. Its an even deeper crisis than in 2005, said Jo Leinen, chairman of the committee in the European Parliament responsible for drafting the original constitution. Back then, the French and the Dutch rejected the draft constitution in national referenda. It took three difficult years after that to get the treaty back on track as the Treaty of Lisbon. But, as French Prime Minister Francois Fillon said, If the Irish people decide to reject the Lisbon Treaty, naturally there won't be any more Lisbon Treaty.

Even committed members of the European Parliament, like Germanys Elmar Brok of the conservative Christian Democrats, who is an advisor to German Chancellor Angela Merkel on EU matters, believe this weeks development threatens to bring an end to a united Europe in its current form. The community of 27, Brok believes, may wind up getting reduced to a casual economic alliance of friendly states and a mini-Europe based around Germany and France. This multi-speed model, however, would be the worse case scenario for Berlin in terms of Germanys foreign and European policy.

During a meeting last week in Germany, Merkel and Sarkozy together agreed on how they would respond if the Irish rejected the referendum. But neither really knew what they should do. Capturing the sense of helplessness both felt, Sarkozy said, Whatever happens, we will offer a joint German-French response. No matter what, the two said, the ratification process should continue, and an exit clause could be provided for the Irish if they werent willing to hold a swift second referendum on the issue.

On Friday afternoon, Frances minister for European affairs, Jean-Pierre Jouyet, who described himself as "devastated," suggested that the scope of the treaty could be limited to the other 26 member states and that Ireland could be offered some other type of legal arrangement.

The Irish disaster was predictable but nevertheless came as a surprise. The political leaders in Dublin, Brussels and the other European capitals realized too late just how bad the mood was among the Irish, even though they had profited from the EU more than any other nation. The Irish economy has been booming since the mid-1990s, with growth rates of 8 to 9 percent.

Prime Minister Brian Cowen feely admits that Ireland's transformation from a "backward agricultural country on the edge of Europe" to one of the continent's economic powerhouses couldn't have taken place without the EU. Since 1973, the country has received a net total of almost €40 billion ($61 billion) from Brussels. The country invested in schools and universities and attracted investors from all around the world with its low corporate tax rates. In particular, American high-tech companies like Microsoft and Dell and pharmaceutical companies like Viagra manufacture Pfizer were attracted to the country.

But then, one or two years ago, the economic wonder began to fade. The real-estate boom came to an end. Around Dublin today, unsellable villas stand on green fields, while new rental properties in the suburbs remain empty. Incomes are unevenly distributed and the rise in prices has once again deprived lower-income groups of their share of the increased prosperity. Many Irish are afraid of too much immigration. Suddenly, practically overnight, the most generous financer of the Irish economic miracle started to look suspect to many people.

Now it's not clear what to do next. The simplest way to get out of the political dead-end would be to persuade the Irish to conduct a second referendum. This approach has already worked well on one occasion, when the stubborn Irish rejected the Treaty of Nice in 2001. Two conciliatory qualifications were added to the document, which then passed without a hitch with 63 percent of the vote in a second referendum a year later.

But Irish Prime Minister Brian Cowen has already rejected a second vote à la the Nice model. The EU would have to offer the Irish substantial changes to the treaty, he said, if a second vote was to be held. But every change to the text would inevitably mean a return to the drawing board -- all 27 EU member states would then have to ratify the agreement again. By that point, at the latest, the euro-skeptic Poles or British would decide that they had new wishes for the treaty, and "the whole thing would be dead," in the words of one Brussels diplomat.

The most probable option that remains is an exhausting marathon. The EU would continue working, at least for a while, with the instruments and powers that it already has. Then, in a couple of years, a new round of negotiations would begin in order to come up with a more efficient set of rules for the club. That would take a long time and by that point the old longing for a smaller, better "core Europe" among committed Europeans would once again have been awakened.

Euro-skeptics, on the other hand, can happily live with the Irish "no" vote. Poland's President Lech Kaczynski was the first to publicly express his satisfaction with the result. "It is no great tragedy," he said.