With not a single opposition politician winning a seat in this weekend's parliamentary election in Belarus, international condemnation has been harsh. Amid claims of widespread fraud, the country's Elections Commission said the turnout was 74.3 percent, though local observers it was closer to 55 percent.

The opposition, which failed to agree on a unified approach for protesting the election conditions, received no coverage by the state-run media in the run-up to the vote. And at least 20 independent election observers were held by authorities, activists said.

The rubber-stamp parliament is now filled with politicians from three parties that support authoritarian President Alexander Lukashenko. The 58-year-old has been in power since 1994 in the country commonly known as "Europe's last dictatorship." Western observers say that since 1995, no election in the country has been free or fair, and the latest vote is likely to deepen its diplomatic isolation.

Economic and travel sanctions have already been levied on Belarus by the United States and the European Union in response to the regime's treatment of opposition groups and independent media, and the West may now take an even tougher approach. In a statement released on Monday, Germany's Foreign Minister Guido Westerwelle said that Berlin and its European partners would seek to further isolate the country, citing "glaring irregularities" in the vote. "The aim of giving President Lukashenko's regime the appearance of democratic legitimacy has clearly failed," he said.

With EU talks on the Belarusian political situation scheduled for next month, there has been discussion of strengthening sanctions against the country's leadership. One concern is Minsk's increasingly close relationship with neighboring Russia, which has provided significant financial support to Belarus in recent years.

German commentators on Tuesday lament the helplessness of the feeble Belarusian opposition and the West to take on Lukashenko, but failed to muster much optimism for the country's future.

"Once again the West has looked on helplessly as the Belarusian head of state strengthened his authoritarian power over a terrified population. But Belarus isn't the only country Europeans are worried about. The Continent is also anxious about whether elections in Ukraine this October will be free of manipulation, and what will become of the imprisoned former leader Yulia Tymoshenko, who has long been in the grip of a suspect judiciary. And next Monday, Georgia votes too. A rather unsavory power struggle there is making it terribly clear to the West just how far the country has to go in creating a democracy. Meanwhile, power becomes more consolidated from month to month ... in Russia. And European hopes that the democratic spring might break out in Azerbaijan under the spotlights of the Eurovision Song Contest were shown to be misplaced. Indeed, it is not democracy or civic participation that is en vogue in Eastern Europe, but government control and the power of autocrats."

"Just a few years ago the boundaries between East and West appeared as though they would melt away. But now a wall that was thought to have disappeared is taking hold between democracies and non-democracies. One reason is that the persistence of eastern power elites has been underestimated in the West. The joint struggle against terrorism and an increase in shared economic interests were sold as strategic partnerships, spurring the hope that democracy and freedom were just a matter of time. But that is not the case."

"But the eastern rulers still shouldn't feel too confident.... People's lust for democracy is less dangerous to the autocrats' long-term power than the desire for economic growth and prosperity. Lukashenko can only afford his relentless course because Russian money keeps his regime alive. ... In the end, the people must decide how much they are willing to suffer, and when they will rise up against their rulers -- and no well-intentioned appeals for democracy in the West will help."

"The conclusion that Lukashenko's position has been strengthened after the elections falls short. Anyone who uses such broad terms is just afraid. Regardless of the election outcome, the EU must now agree on policy steps to strengthen sanctions against the Lukashenko regime, to support Belarusian civil society and finally enact visa facilitation. Lukashenko will continue to act in the same manner, but the West must not do the same. "

"Elections in Belarus are a farce, which the parliamentary election on Sunday have confirmed. But what does this mean for those who want democracy? The Belarusian opposition was divided on this issue, and this dispute makes them look even weaker than they already are. … But it is pointless to condemn the opposition for this. They face the same dilemma that also troubles the EU: How far must they go in order to make a difference at all? During his two-decade reign, Alexander Lukashenko has weeded, cleared and paved over the political field. There is no life there, unlike in neighboring Russia, where there is at least debate between parties in parliament and protests in the capital.... Like the opposition, the West must also recognize the bitter truth that the foundation for democracy has been completely destroyed in Belarus."

"True to its reputation, Belarus remains the last communist dictatorship in Europe. … But its European neighbors should not simply shrug their shoulders regretfully. First, the EU can put more pressure on the regime, which has run the country into the ground economically. And second, Brussels should bind its services to concrete expectations of how the regime will behave. Understanding for the customs and traditions of the Lukashenko regime should be doled out very sparingly. … Europeans will have to find the balance between moral disapproval and practical influence."

"European democracies and the Belarusian opposition are in a similar situation in view of the 'parliamentary elections' in Belarus -- they are helpless. … After all attempts at cooperation have failed, the only option that remains for the West is confronting Lukashenko with harsh condemnation and isolation. This might work if not for Moscow's support of the dictator in order to gradually gain more control over the Belarusian economy. The great danger is that the country will eventually fall into the Kremlin's lap like a ripe fruit. Then democracy in Belarus definitely doesn't stand a chance." 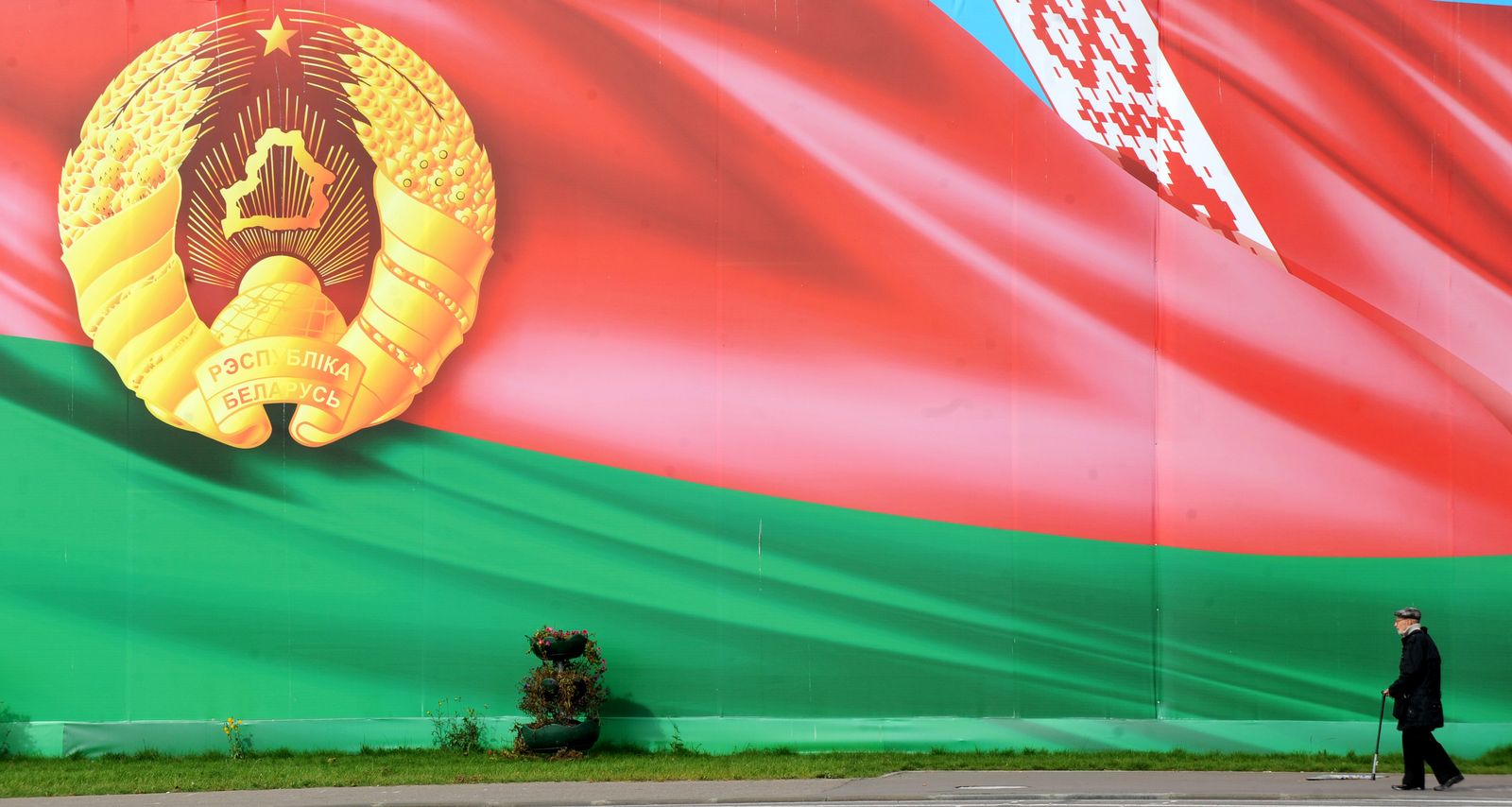 A man walks past a huge image of the Belarus flag and state emblem in Minsk on Monday.