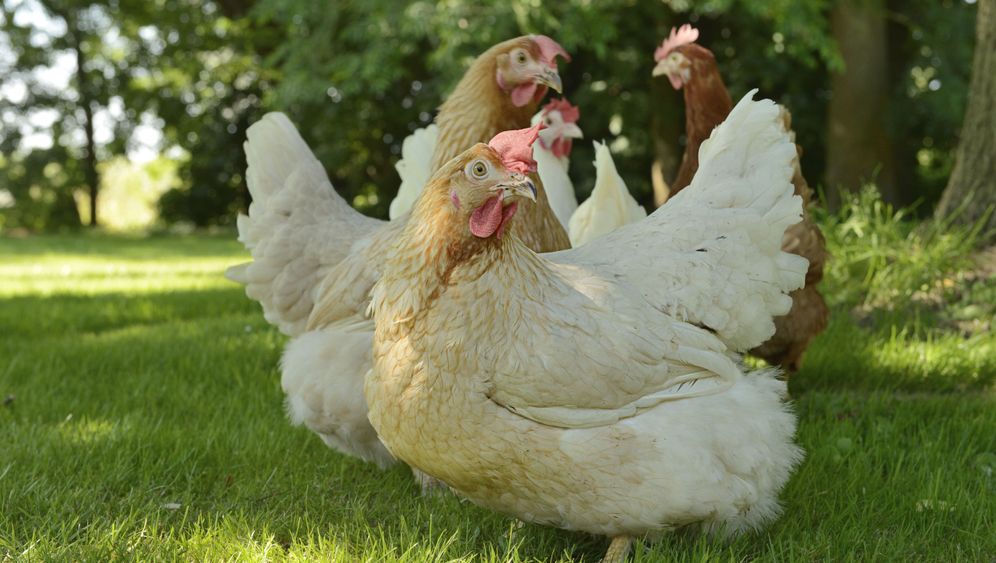 In the town of Kitzingen, in the south German state of Bavaria, a nondescript barn houses some heavily researched chickens. The building contains two long rows of tall wire cages, each three meters (10 feet) long and two meters (6.5 feet) wide. Each cage contains 24 chickens. They look healthy and vigorous. Some are sitting on poles, others are scratching on the ground, and a few have retreated to nests at the end of the chicken coop.

This new breeding line, "Lohmann Dual," is a registered trademark of the world's largest producer of egg-laying hens, Lohmann Tierzucht, which has its headquarters in Cuxhaven in the northern German state of Lower Saxony. They were created by Lohmann Managing Director and Chief Geneticist Rudolf Preisinger. For years now, the 55-year-old professor has been working on this breeding line -- crossing breeds, measuring birds, counting eggs and weighing chicken feed.

Now he has traveled to this testing barn run by the Bavarian State Research Center for Agriculture, where the birds will be compared with other breeds under controlled conditions. Preisinger gives a loud clap with his hands and then carefully observes his birds. Hundreds of chickens fall silent for a second and stretch their necks, but none fly up in panic. "That's how it should be," says the geneticist, "very calm, good-natured animals."

This new breed of Gallus gallus domesticus, the domestic chicken, is a small sensation in the agricultural industry. The bird is the first so-called dual-purpose chicken in the product range of the company, whose hatcheries in Germany alone produce some 45 million laying hens every year. This means the new breed supplies both eggs and meat: The female animals of the breeding line reportedly lay 250 eggs a year, while the males make respectable broilers -- meaning a bird fit for broiling -- at an age of 70 days.

Lohmann bred the dual-purpose chicken in response to growing criticism of conventional practices in modern egg production. Millions of male chicks belonging to egg-laying breeds are destroyed immediately after they are hatched. They are worthless for the poultry industry because they don't lay any eggs and, because of their breed, don't produce much meat. The male chicks are thrown alive into a kind of meat grinder, called a macerator, and then discarded as refuse. Or they are suffocated with carbon dioxide. This at least allows their bodies to be used as feed at zoos and reptile farms.

For years, animal-rights activists and consumer associations have been denouncing this "mass murder" in the hatcheries as one of the perverse excesses of profit-driven factory farming. The legality of this culling is also the subject of considerable debate: Germany's animal protection laws prohibit the killing of vertebrates without "reasonable cause." Until now, local authorities have tolerated the practice, at least when the dead chicks are marketed as animal feed.

But in late September Johannes Remmel, the agriculture minister of the western German state of North Rhine-Westphalia, decided to intervene. "This practice is absolutely horrifying. We cannot allow animals to become the object of an overheated and industrialized system," says Remmel, who is a member of the environment-friendly Green Party. The minister has decreed local authorities ban the killing of male one-day-old chicks within the next year. Lower Saxony, the state with by far the largest hatcheries, will perhaps soon follow suit. Remmel's fellow party member and counterpart in Lower Saxony, Christian Meyer, is currently exploring the possibility of introducing a ban.

The root cause of the mass killings is the industrialization of poultry production. Up until the 1960s, chickens were raised together with many other animals on farms. The hens laid eggs, and when their productivity declined, they ended up as stewing hens. The roosters were sold on the market as broilers. As the demand for eggs and poultry grew, breeders sought to optimize the animals -- laying hens to be lean and tough; broilers to be meaty. Since then, there have been egg-laying breeds and meat breeds.

The specially bred laying hens manage to produce 310 eggs a year, 100 more than their ancestors 50 years ago. But they hardly put on any meat. By contrast, meat chicken breeds weigh 2 kilograms (4.4 pounds) within five to six weeks. Then they are slaughtered before they even become sexually mature.

These days, the industry uses virtually only hybrids: high-performance chickens produced by crossing a number of breeds. This is a good business for companies like Lohmann because the animals -- in contrast to purebred birds -- cannot be bred on farms. Chicken farmers have to continuously buy new chicks from the breeders.

Chicken breeders have even managed to introduce a gene whose sole purpose is to make it easier to identify the sex of the chicks. Males and females have slightly different color feathers, allowing them to be quickly sorted for culling after they hatch.

The dual-purpose chicken bred by Preisinger could put an end to the massacre of male chicks that has existed since the introduction of the hybrids. But there are problems: the animals are still not very efficient, despite all the breeder's efforts. "The hens lay fewer eggs than the egg-laying hybrids. Their brothers need 50 percent more feed than conventional broilers before they are ready for slaughter," admits Preisinger.

Furthermore, broilers sold in the supermarket have always appeared round and compact, while the dual-purpose chicken tends to be long and bony. Where hybrid meat chickens have breast meat, the new breed only has a thin, protruding breastbone. On the other hand, the bird has more meaty thighs. "Consumers will have to want something like this," says the top breeder.

But customers -- and thus also the retail food trade -- yearn for light breast meat; the rear third of the bird's body is largely unsellable. To make matters worse, the eggs of the dual-purpose chicken are two to three cents more expensive. Many customers are particularly price-conscious when purchasing eggs.

Not surprisingly, Lohmann's super chicken, which has been on the market for two months now, has suffered dismal sales. Only three farms in Austria have ordered the young hens. Even organic farmers are reluctant to buy the new birds. While those farmers allow their chickens more movement and give them different feed than conventional farmers, they rely on the same high-performance hybrids. Indeed, millions of male chicks are also killed for the production of organic eggs.

Meanwhile, researchers are exploring another possible high-tech solution to the chick problem: a way that allows the birds' sex to be recognized while still in the egg. Male animals could then be sorted out before they hatch, which would circumvent the animal-protection debate and cut costs at hatcheries. For the past eight years, the University of Leipzig in eastern Germany has been researching a method based on hormone analysis of the fertilized egg. Researchers at the University of Leuven in Belgium are also testing a technique that involves scanning the eggs. But both systems are not yet reliable, and they will probably be too expensive.

Such a process would allow Lohmann and other producers to continue with the profitable hybrid breeding they have been doing for years -- though even that strategy has its own shortcomings, because hybrid animals are susceptible to diseases. The high laying performance also means the hens rapidly use up the calcium stores in their bones. After only a little over a year, they are -- just like their brothers before them -- disposed of as animal fodder or, at best, stewing hens.

Back to the Basics

This has prompted some organic farmers to go another route -- by returning to traditional methods of chicken farming. Two years ago, the organic food association Naturland launched a pilot project which relies on an old French breed, the Bresse chicken, instead of intensively bred hybrids. One of the participating growers is Lutz Ulms, who has an organic farm on the outskirts of the small town of Sonnewalde, about 100 kilometers (62 miles) south of Berlin. He bought 500 male and 500 female chicks, bred the next generations himself, and let the egg-laying hens live longer than one year.

His organic food customers are delighted with the project, says Ulms. But, for him, it hasn't paid off. "It's a hard way to earn a living," he admits. When he wanted to have the young hens vaccinated, he had difficulties finding a vet. "It's not worthwhile for farm animal vets to drive out to our place. Small animal vets don't know anything about raising poultry," he says. He also had to pay extra at the slaughterhouse because he deals in such small quantities.

Even the chickens turned out to be more unpredictable than expected. Many of them injured themselves or died as a result of feather pecking. Others tried to brood their eggs rather than lay new ones. Ulm's birds ultimately laid between 160 and 170 eggs each year. Four eggs sold for €2.40 ($3.25) in natural food stores (in comparison, 6 organic eggs sell for €1.55 at Aldi Nord, the German discount food chain).

But Preisinger's dual-purpose chickens aren't much of a money-making venture either. Although they are diligently laying their eggs in the barn in Kitzingen, their eggs are much smaller than expected. "For weeks now, they have only been large enough for weight class S," complains the geneticist (S being the smallest weight class for eggs). In the store on the experimental farm, 30 eggs from the super birds go for just one euro. But just like the chickens, the eggs aren't selling. 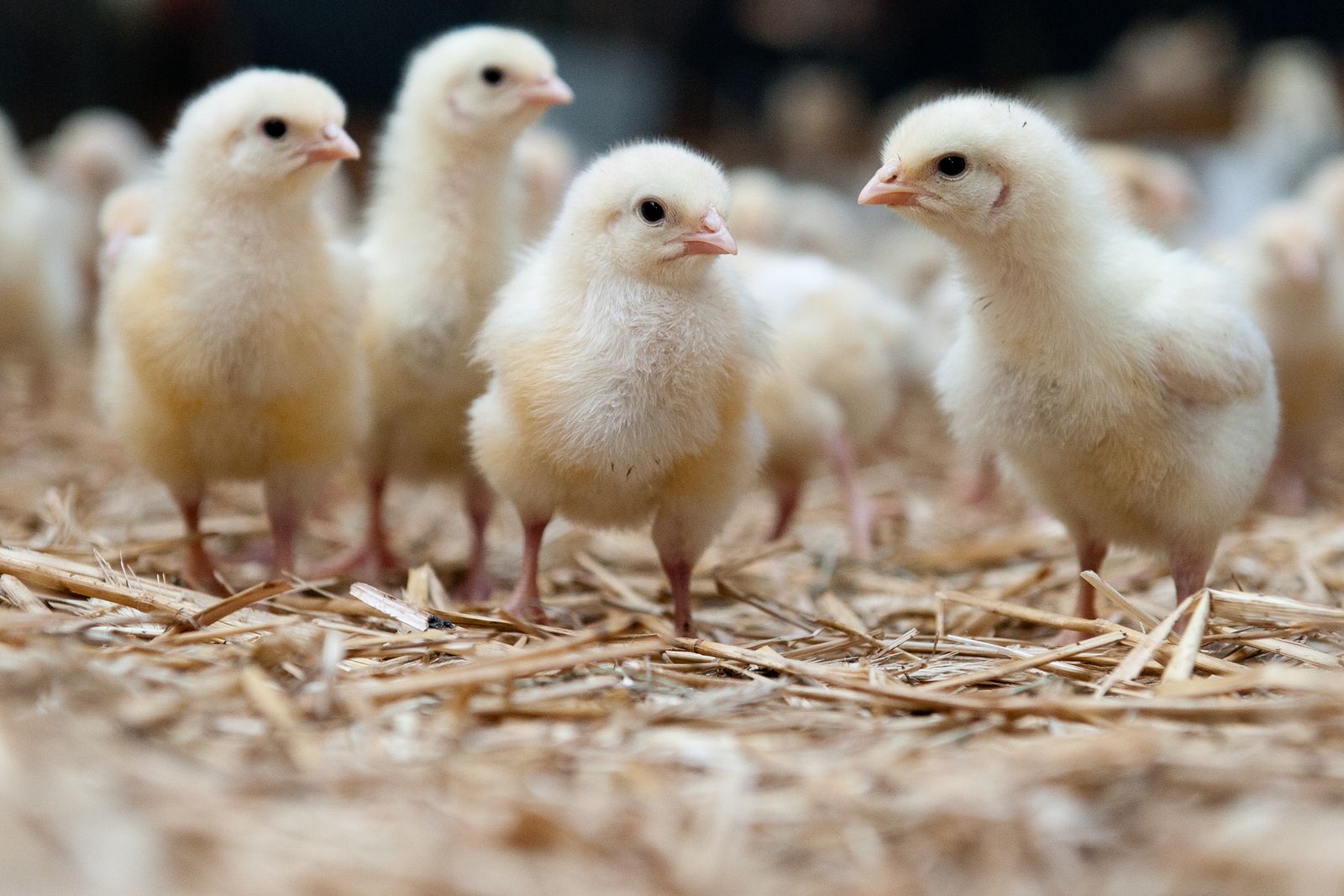 Lohmann bred the dual-purpose chicken in response to growing criticism of conventional practices in modern egg production. Millions of male chicks are destroyed immediately after they are hatched because they don't lay any eggs and, since they belong to an egg-laying breed, don't produce much meat. Pictured: Female chicks in a shed in Germany.