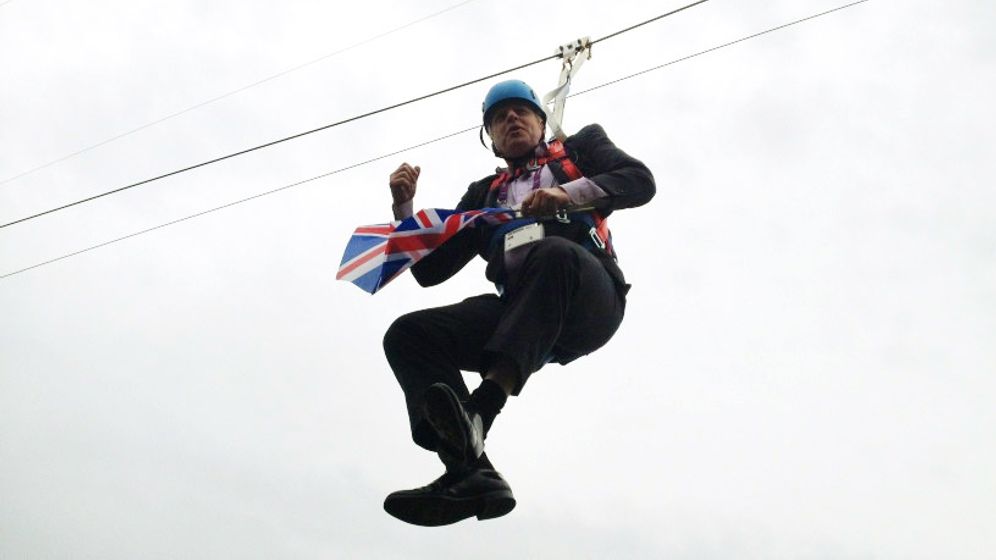 The stunt had a little James Bond to it. With a Union Jack in each hand, London Mayor Boris Johnson whooshed along a zip line hanging over a park near the city's Olympic grounds. Despite his less-than-debonair safety helmet, he could enjoy that 007 feeling for a few moments -- until he suddenly lost momentum and was left hanging in mid-air. "Fetch a ladder! Fetch a rope!" Johnson called out to those below. Instead, they rushed to take a few photos of the mayor with their mobile phones as he flopped around in the air for minutes.

The move was pure Boris -- apparently spontaneous but completely hilarious. Indeed, this sort of slapstick performance is what has come to set him apart from the stuffed shirts in City Hall.

Boris' unintentional airborne performance on Wednesday became an instant hit in the Twittersphere. A quickly launched photoblog named Dangleboris soon had featured photoshopped pictures of the mayor hanging over several British landmarks and in a number of iconic photographs, some less tasteful than others. There was Boris suspended from London's Tower Bridge, Boris hanging over Prince William and Kate Middleton in a wedding photo, Boris being dipped into a teacup, Boris being held out of a Berlin hotel by Michael Jackson, and Boris dripping snot-like out of a number of celebrity nostrils.

Pundits were quickly unanimous in their verdict: What would damage your average politician has done nothing but give Johnson yet another boost in popularity. The Financial Times even concluded that the zip-line snafu "may only serve to confirm Boris's reputation among the British public as Westminster's most loveable buffoon."

These days, the 48-year-old Tory is being celebrated as the true Olympic victor. In popularity polls of Conservative politicians, he lies at the top, far above Prime Minister David Cameron, and a majority say they would like to see Johnson replace Cameron as the occupant of 10 Downing Street. Of course, Johnson has stressed that he holds no such ambitions, but his actions during the Olympic Games have rekindled the debate.

Indeed, Johnson has used his status as the leader of the city hosting the Summer Games to shamelessly market himself. Not a day has gone by without his shaggy blond mane making an appearance in the newspapers or on television. On one day, he'll be seen accompanying the queen on a tour of the Olympic Park; on another, he's seen making himself comfortable on a bed in the athletes' village in front of a throng of cameras. This week, he was photographed taking pictures of a beach volleyball competition with his Blackberry.

And when the images don't attract attention, Johnson makes sure that his bon mots at least grab headlines. In a column published in the Telegraph on Monday, Johnson celebrated how London had "semi-naked women playing beach volleyball in the middle of the Horse Guards Parade … (and) … glistening like wet otters."

The mayor has also become a star among the gazillion international journalists in London for the games. His name recognition is skyrocketing abroad, and the aristocratic eccentric is viewed as a genuine British rarity. His growing renown is being closely followed in government circles -- and interpreted as yet another sign of his ambitions to one day become the country's prime minister.

The Cheerleader of a Nation

In the weeks before the games began, the British media got into a tizzy about every tiny flub in the preparations. But Johnson used this period to project himself as the country's cheerleader-in-chief. In the opening days of the competitions, when the British had yet to win many medals, Johnson noted how: "We have shown natural restraint and politeness in not hogging the medals board so far." And, last week, when US presidential candidate Mitt Romney questioned whether Londoners could really get excited about the games, Johnson made a highly public response. "There's this guy called Mitt Romney who wants to know if we are ready," Johnson bellowed out to a crowd of about 60,000 in Hyde Park. "Are we ready? Yes, we are."

Johnson views spreading good cheer as one of his primary tasks. And he's been good at it. Even backers of the opposition Labour Party, who usually can't stand Tories, have let themselves be won over by Johnson's rogue charm and ready wit. Indeed, it was precisely this ability to inspire people of various political stripes that secured him another term at the helm of City Hall after elections in early May.

This popularity is what makes him Cameron's most dangerous intra-party rival. The prime minister is currently enduring a phase of weakness. The country has slipped back into recession, and the austerity measures ushered in by his Conservative-Liberal Democrat coalition government have been met with mounting criticism. Indeed, the situation has become so dire that there have been rumors that Chancellor of the Exchequer George Osborne will be replaced in the fall.

Given these circumstances, all the yearnings of Britain's Conservatives are suddenly being projected onto Johnson. Even though he would probably pursue the same policies as Cameron, his status as a possible beacon of hope leads people to overlook this fact. Indeed, as the media darling, the clown-politician can get away with things that no other elected official can. Johnson can defend the City's bankers without having his popularity take a hit, and he was even able take Ruport Murdoch, the much-maligned media mogul, to some Olympic events on Friday.

An article in the Telegraph on Tuesday claimed that Johnson has "snatched the spotlight away from the prime minister and used the Games as a launch pad for his leadership ambitions." The Cameron-friendly newspaper also noted how there has been a "sudden outbreak of Boris-mania" among Conservative donors.

None of this is being lost on the opposition. In a piece published in the Guardian on Wednesday, Alastair Campbell, a former spin doctor for Tony Blair, wrote how Johnson is "charmingly and ruthlessly exploit(ing) the Olympics to build and extend his profile." Although he admits to never having taken Johnson very seriously, Campbell says he is "defying gravity" and using "a very calculating display of raw politics at the expense of a currently rather vulnerable leader."

The prime minister "has a fairly long list of problems," Campbell writes. "Boris Johnson is without doubt one of them."