SPIEGEL: For years, you were Europe's darling. But now, people in Brussels, Paris and Berlin see you as the leader of a tax haven. What happened?

Jean-Claude Juncker: What happened is that some of my counterparts say one thing today and something else tomorrow, and do not stick to agreements. And some adopt a tone that we find unpleasant. 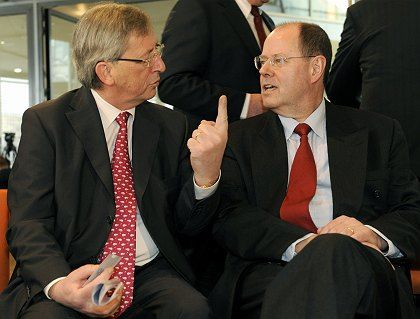 Jean-Claude Juncker (left) and Peer Steinbrück (right) are not the best of friends.

Juncker: For example, we Luxembourgers don't like it all when someone like Social Democrat Chairman Franz Müntefering says calmly, apparently thinking it humorous, that in the past soldiers were sent to resolve the sorts of problems they are now having with us. We don't find it funny. We have been occupied before, and we suffered under German occupation. Thank God we no longer use soldiers to resolve our problems.

SPIEGEL: You're right, it wasn't funny at all.

Juncker: It also isn't funny to hear German Finance Minister Peer Steinbrück, who apparently has a better understanding of Karl May than Karl Marx, using images of the Wild West. He apparently wants to deploy the US Cavalry from Fort Yuma to fight the Indians. And when he mentions the Indians, he means either the Swiss or us. We don't talk about the Germans that way. And the Germans have no right to talk about the Luxembourgers that way.

SPIEGEL: Luxembourg, together with Belgium and Austria, is refusing to do something that all other EU countries do as a matter of course, namely to report the interest earnings of foreigners to tax authorities in their home countries. That's why you, along with non-EU countries like Switzerland and Liechtenstein, were placed on a so-called gray list of tax havens.

Juncker: Wait a minute! Belgium, Luxembourg and Austria have agreed to satisfy the tax standards of the OECD regarding so-called "exchange of information on request." In other words, if a German tax office has questions about the tax information provided by one of its clients and asks us for help, it can receive any information it desires. After this commitment was made, the EU heads of state agreed, at their summit meeting in March, that none of us would be placed on a list of tax shelters, whatever you want to call it. That is what is stated in the public communiqué. But a few days later

SPIEGEL:  at the G-20 summit, the meeting of the 20 most powerful industrialized nations in London

Juncker: at which small countries like ours are, of course, not represented, precisely the opposite step was taken. We were placed on a list of countries to be pilloried. That, as far as I am concerned, is an outrageous procedure.

Juncker: I am disappointed by all our EU counterparts who broke their word in London, after having given it to us in Brussels.

Juncker: Now we will have to have a serious discussion in the EU over the dependability of joint resolutions. This, at any rate, is unacceptable.

SPIEGEL: But your critics are trying to fight the use of foreign bank accounts to commit tax fraud. What exactly is so objectionable about reporting interest income?

Juncker: There is nothing objectionable about it. But in 2003, we in Europe agreed on a rule governing the taxation of interest income, under which the three countries -- the three that are now being ostracized -- would collect a withholding tax on the interest income of foreigners and turn over most of these revenues to the home countries. The other countries practice information exchange instead.

SPIEGEL: They generally send every interest statement, even unasked?

Juncker: Yes. We didn't want that, because we think it's incredibly bureaucratic. Besides, we doubt that it puts more revenue into the national treasuries than our withholding tax.

SPIEGEL: That sounds like an excuse designed to make Luxembourg attractive for tax evaders. Please tell us unequivocally: Should capital gains be recorded and taxed the way, for example, wages and salaries are -- even in Luxembourg, a banking center?

Juncker: Of course. The owners of capital should be taxed just as employers and employees are taxed. And, of course, I don't want to see Austria or Luxembourg enrich themselves at the expense of neighboring countries by attracting tax evaders. In the 1980s and 90s, who objected to the sensational advertising of German state-owned banks when they used their Luxembourg branches to attract customers? I did. But the state governments responsible for these banks expended precious little effort on the problem. And was there any moral outrage in Germany over the fact that, until July 2005, Frenchmen, Italians, and Belgians -- none of whom lived in Germany -- were not required to pay any taxes at all on interest income from their bank accounts in Germany? Germany was Europe's biggest tax haven until July 2005.

SPIEGEL: Be that as it may, it belongs to the past. Now we are talking about the last remaining refuges for tax evaders.

Juncker: Well, I could certainly name a few. Look, I have nothing in principle against renegotiating the taxation of interest income. But then I want rules that apply equally to everyone, both materially and geographically.

Juncker: What I mean is that corporate foundations, for example, and the enormous British trusts should be included. And then, of course, the world's biggest fortunes, which the British government now single-mindedly attracts to London and only taxes minimally, ought to be subjected to adequate regulation. And all they ever talk about is the Cologne butcher who has an account in Luxembourg or Austria and hides the interest income from the tax authorities. Who mentions the tax havens for multibillionaires from our countries, who can hide their income in London? You don't hear a word about this from Berlin or Paris, and certainly not from Brussels. But I believe that they too should pay.

SPIEGEL: Rumor has it that all the aggravation of recent weeks has prompted you to lose interest in your position as chairman of the Eurogroup. Is that true?

Juncker: No, it's not true at all. We will hold both parliamentary elections and European elections in Luxembourg on June 7. Only after that will it be clear whether I will become finance minister again. Only then could I be the president of the Eurogroup again. I would be willing to accept the post, even though the job comes with no risk of my having to pay the entertainment tax.

SPIEGEL: Perhaps you would be interested in other EU positions. The presidency of the European Commission will soon become available, and once the Lisbon Treaty becomes reality, there will be a president of the European Council for the first time.

Juncker: First, I am running for re-election as prime minister of Luxembourg. Second, we'll have to see whether the Irish people accept the Lisbon Treaty. Third, one cannot run for such offices, but has to be nominated by others. And fourth, my political instinct tells me that, after the spats of recent months, some of my EU colleagues will not be terribly enthusiastic about appointing me to such posts.