Luxembourg? The American security guard wrinkles his forehead, as if hearing the name of this small European nation for the first time. "Everyone out," he tells the driver of the silver sedan. Asked if that command applies to the minister as well, the guard replies, "Which minister?"

The chauffeur points to a man with a moustache and styled hair. "Everyone," the guard repeats. Jean Asselborn, foreign minister and deputy prime minister of the Grand Duchy of Luxembourg, peels himself from the passenger seat, commenting, "They're all a little nuts here."

This is Monday of last week, the day before the start of the United Nations' annual General Debate, in New York: Iranian President Ahmadinejad is in the city, and United States President Obama and Israeli Prime Minister Netanyahu have also announced plans to attend. Entire streets are closed and entry to many hotels requires a full body search -- this is New York City under extraordinary circumstances.

A bomb-sniffing dog comes bounding up, the men can't get the car hood open and it's nearly 8 p.m. "Sir, they're expecting us," Asselborn calls to one of the guards, but the man doesn't even look at him.

The fact that these men are not treating him like the government minister he is seems to bother Asselborn less than the possibility of arriving late to this dinner, where he plans to campaign on behalf of his country in front of around 25 of his colleagues from around Europe and the Middle East. This is the final phase of Luxembourg's candidacy for one of the UN Security Council's non-permanent seats, which are due to be allotted for another two-year term later this month.

A short while later, Asselborn is standing on the terrace of a penthouse with a view of the East River, the UN Headquarters at his back and a glass of water in his hand -- the dinner in question is here at the International Peace Institute. Norwegian diplomat Terje Rød-Larsen, president of this non-profit think tank, organized the secret talks between Israel and Palestine in the 1990s that led to the Oslo Accords. "Jean is a special person," Rød-Larsen says of the minister from Luxembourg. "Everyone likes him."

The Longest Serving Foreign Minister in the EU

That statement may be a bit of an exaggeration. German Foreign Minister Guido Westerwelle walks right past Asselborn when he first enters the room, while Sweden's Foreign Minister Carl Bildt greets him with the words, "Ah, the great empire of Luxembourg!"

Asselborn is the longest-serving foreign minister in the European Union, yet many still seem not to take the 63-year-old politician quite seriously. This is partly because Asselborn rarely gives major speeches; he is also overshadowed by his prime minister.

At the moment, though, Prime Minister Jean-Claude Juncker is too busy dealing with the euro crisis to have much time to spare for foreign policy. The opening this creates for Asselborn is not a large one, but he makes good use of it. And Luxembourg's foreign minister is not a man inclined to conventional diplomatic turns of phrase. This particular evening, as most of the dinner's attendees talk about Syria and about riots by Islamic fundamentalists, Asselborn warns against forgetting the Palestinian conflict. European colleagues shake their heads over Asselborn's comments, but his direct manner has won him friends in the rest of the world.

As a child Asselborn wanted to be a milkman; his father worked at a steel mill. After completing a basic level of secondary education, Asselborn worked shifts during the day and completed his university entrance qualifications at night school, then later studied law. After 22 years as mayor of Steinfort, population 4,500, Asselborn became his country's foreign minister in 2004. Security Council membership would be the crowning achievement of his political career, and it's something the Social Democrat has been working toward for the past eight years. Candidacies for these positions are often established far in advance -- the UN has, for example, already received Syria's application for the year 2038.

'We're not Burdened by Colonialism'

Gaining UN Security Council membership depends on successfully closing a good number of bilateral deals, sometimes promising to support another country's candidacy in exchange, sometimes promising more development aid. Asselborn's approach has centered on specific lines of argument. "We're a founding member of the United Nations, yet we've never held a seat on the Security Council," he says. "And we're not burdened with a legacy of colonialism. When we make foreign policy, we're not pursuing any hidden agenda."

Asselborn has flown around the globe, sat through conferences in Africa and accepted unusual invitations. Once he was served a sheep's eye. "I just thought, eyes closed and swallow," he says of that experience. Afterward Asselborn, not generally inclined to drink hard alcohol, ordered himself vodka.

On Oct. 18, Asselborn will know whether all that effort paid off. He needs the votes of at least 129 of the UN's 193 member states in order to win a Security Council seat, for which Luxembourg is competing against Finland and Australia.

It's grown late and the foreign minister is standing on the terrace, the skyscraper of the UN Headquarters jutting up against the night sky behind him. Even if he doesn't achieve his goal, Asselborn says, at least he was able to increase awareness of his country.

Then he points down toward the square in front of the UN building, site of a famous bronze sculpture of an oversized gun with its barrel tied into a knot. The knotted gun has become a symbol of the UN, but few people are aware of this little-known fact: The sculpture was a gift from that small country known as Luxembourg. 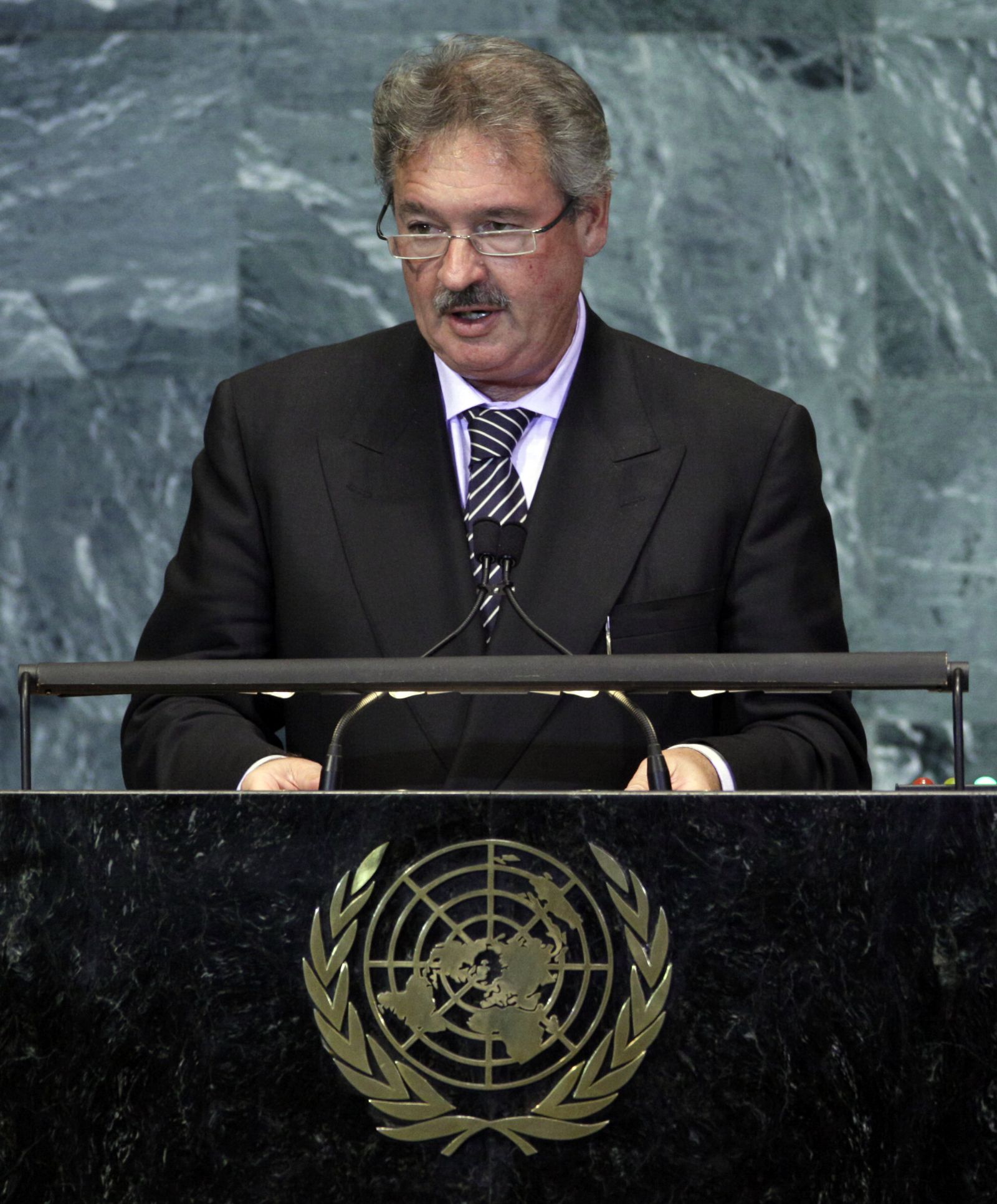