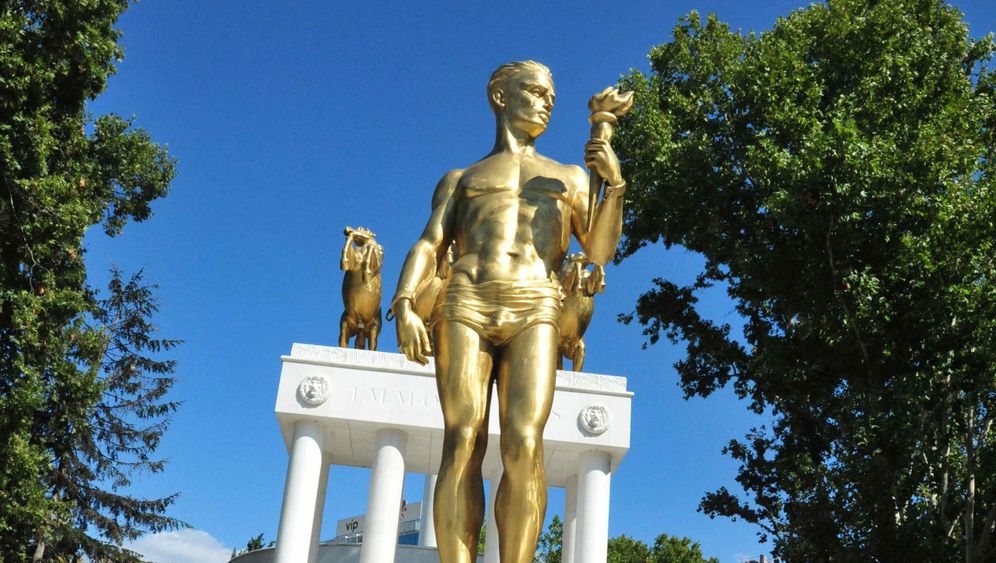 Jets of water spurt into the air in front of the warriors: red, yellow, blue, violet. The eight bronze men stare fiercely through the spray of the fountain, while far above their heads, Alexander the Great sits enthroned, raising one sword up at the sky. Wagner and Tchaikovsky blare out of the speakers and the water shoots more or less in time with the music.

Skopje has a new landmark: The Warrior on a Horse monument on the Plostad Makedonija, a square at the center of the city, is almost 30 meters (100 ft.) high, cost €10.5 million ($14 million) and is about as authentic as the imitation Grand Canal in Las Vegas. More heroes from Macedonia's colorful history pose nearby, sculpted on a large, if somewhat misshapen scale. The feet of the saber-rattling flag-bearer, for example, are disproportionally large.

On the other side of the Vardar river, near the entry to the old town, a statue of Philip II of Macedon -- Alexander's father -- shakes a colossal fist at the sky, while bronze horses jump out of a nearby fountain. New temple-like ministry buildings, a theater and a museum -- with its own line-up of 19th- and 20th-century poets and revolutionaries -- have been built between the monuments to the two kings.

And the construction project isn't finished: Numerous facades are still obstructed by construction cranes. Buildings are being retrofitted with the dictated sugarcoated new style that the local media diplomatically calls "baroque" or "neo-classical," and architects call "historical kitsch."

The redevelopment is called Skopje2014 and is costing VMRO, the conservative and nationalist governing party, hundreds of millions of euros. The official budget is €207 million -- which includes the renovated ministry buildings, the new national theater and triumphal arch.

Critics believe that's an impossible figure, that it won't buy half of what the plans call for. Even Skopje2014's overall theme -- a celebration of ancient and Slavic heroes -- has been condemned by experts because it ignores many of Macedonia's ethnic groups and favors a small section of the national fabric.

According to news reports, the contracts for the project were made illegally. But the Macedonian media have been restrained in their protest. "Too much criticism can quickly cost you your job. The VMRO has long had control over the media," says one journalist, who does not want to be named. There's a reason Skopje2014's monumental style has an authoritarian feel.

The case of Tomislav Kezarovski is yet more evidence of this: The journalist recently received a four-and-a-half-year jail term for having allegedly revealed the identity of a witness in a murder trial in 2008 -- an accusation independent observers claim is an attempt to muzzle a journalist critical of the government.

The Organization for Security and Cooperation in Europe has been sharply critical. The group's press freedom appointee Dunja Mijatovic says she fears the court decision could become a "strong message of censorship directed at other journalists in the country." The people in power have long made their threats known, and countless critical media organizations have shut down in the past few years.

The current economic situation offers little reason to build a triumphal arch. The financial crisis has hit Macedonia hard. Every second young person is unemployed, and the overall unemployment level is one of the highest in the world -- almost 30 percent. Those who have jobs are relieved when their salary tides them over until the following month. The universities are underequipped, as are the hospitals. Renovations are necessary in many places, but the government apparently has other priorities.

The government and its construction project have provided people with some strange stories. Two young architects, Boro Gadjovski and Filip Dubrovski, stand in front of the recently erected Fallen Heroes of Macedonia monument. Behind them, a torch-bearing young man glistens in the autumn sun. "In the beginning you could only see his steeled muscles," they say with a laugh, referring to its original nude state. There were waves of indignation: Such a nakedly "classical" statue wasn't allowed, and so the torchbearer was fitted with a pair of pants.

The two men don't take any pleasure in the Skopje2014 prestige project -- they'd rather remind people of another city construction project which had come about after the city was destroyed in a 1963 earthquake. After the catastrophe, "the reconstruction was a unique opportunity for modern city planning. Under the leadership of the United Nations a number of countries were involved. Skopje became a symbol for worldwide solidarity," says Gadjoski. "They were going to build a humane yet utopian city," adds Dubrovski.

The master plan for the post-earthquake reconstruction was designed by Japanese star architect Kenzo Tange, and resulted in angular cement structuralist icons and sleek skyscrapers that diverged from the normal apathetic prefab constructions of the time. Tange designed a train station that was never finished. "He wanted to put up footbridges for pedestrians to cross the streets going into the center. Pedestrians treated as more important than car traffic -- where else did people think so progressively in the 1960s?" asks Dubrovski.

The Gradski Trgovski Centar shopping center is the square's last remnant of that period. It won a national architecture prize in Tito's Yugoslavia, and yet the Skopje2014 plan calls for it, too, to be "baroquized."

There is a group of architects in the city who oppose this transformation. They demonstrate on the edge of the shopping center in the evenings. Gadjovski and Dubrovski take part, along with another 30 allies. A woman sings lovely jazz in the cold autumn evening. Others distribute hand-decorated balloons. Only a small local TV station sends a team to cover the event. "In the summer we were still a thousand people," says one of the demonstrators and shows the photos on his smartphone.

But it's not just the protests giving the Skopje2014 planners a headache. "The new buildings are much too close to the river," says Boro Gadjovski. "When there's flooding there could be damage."