The staging was similar to that of French President Emmanuel Macron's groundbreaking speech on the need for European Union reform delivered at the Sorbonne last fall. Surrounded by a handpicked audience, German Foreign Minister Heiko Maas spoke last week about the lessons that Europe must draw from the policies being pursued by U.S. President Donald Trump. Maas demanded that Germany "join forces with France" and said that, "given the uncertainty in trans-Atlantic relations in particular, it must be absolutely clear that we are working hand in hand."

In the question-and-answer session that followed, one young listener asked if Maas could be a bit more precise about what Germany and France would be proposing this week. The foreign minister responded that he "could not yet conclusively answer because we are still engaged in intensive discussions on many points."

In truth, that means that Germany and France are far away from "working hand in hand." Whereas leaders in Paris and Berlin have repeatedly insisted how important the German-French relationship currently is, the differences between the two countries remain vast.

When the German and French cabinets meet on Tuesday in the Meseberg Castle just north of Berlin, Macron and German Chancellor Angela Merkel will likely find it difficult to prevent the dissent from breaking out into the open. The French president is frustrated because the German response to his reform proposals came so late and was so timid. At the same time, the two countries have competing views on a number of issues: the trade conflict with Trump; the path forward on eurozone reform; and the future of European foreign and defense policy.

Intense discussions are ongoing behind the scenes. For the last several weeks, the ministries in question in Berlin and Paris have been negotiating and almost a dozen papers have been drafted. But thus far, the two governments have been unable to agree on substantial results.

Yet the expectations of the Macron-Merkel duo remain significant, with Europe needing to finally find a response to the anti-European policies of the U.S. president. Trump's "America First" chest-thumping offers a perfect opportunity for Europe to finally become "sovereign," as Macron has been demanding for quite some time. The Germans and the French have little choice but to cooperate following the U.S.-induced collapse of the G-7 summit in Canada.

But Paris is consumed by disappointment at the German response to Macron's efforts to relaunch Europe. The proposals from Berlin, says a source close to Macron, are a "cute signal," but they don't go nearly far enough.

The French would particularly like to see more when it comes to the eurozone budget proposed by Macron. Merkel's idea of using the European Stability Mechanism (ESM), the EU bailout fund, to supply short-term aid to EU countries in need is interesting, French Finance Minister Bruno Le Maire said, in an interview with DER SPIEGEL. "To be clear, though, it is not enough. This proposal does not make a eurozone budget superfluous."

The tone is becoming increasingly irascible in the two capitals. "The Germans surely believe that they have already made far-reaching compromises," says one Macron adviser, but Paris sees things quite differently. Berlin must finally realize, the adviser says, that "for the first time in 15 years," France is being governed by a partner at the same level as in Germany. And just as the Macron government is pursuing reform at home, it is going to continue to demand that the EU be renewed as well. Berlin, says the adviser, is apparently no longer used to such persistence.

On the German side, some have begun reacting with exasperation to the constant stream of French demands. Macron is wrong if he believes that, just because he held a speech a few months ago and has been repeating his demands since then, everyone will start dancing to his tune, says one German diplomat. He refers to it as the "Macron Method," a clear retort to the accusation that the "Merkel Method" involves waiting for things to develop before taking a clear position.

The international community works a bit differently than France does, says the Merkel adviser. "Just because Macron said something doesn't mean that we have to do it." Berlin refuses to reduce itself to the role of fulfilling Macron's demands just to avoid a disgrace, he says.

But it's not just on issues pertaining to the reform of the eurozone where Germany and France have competing philosophies. Nobody denies the need to reform the EU's common security and defense policy. And on paper, at least, it has existed in the Maastricht Treaty since 1992. But so-called "battle groups" that were founded 15 years ago have never been deployed and the EU foreign policy chief is far from becoming a real EU foreign minister.

The EU's principle of consensus often means that the 28 member states can often only agree on the lowest common denominator. A single country is able to block important decisions. We must put an end to "the curse of unanimity," said Foreign Minister Maas in his Europe speech last week. But that is about the only thing that Berlin and Paris agree on.

Reacting to Crises and Conflicts

The competing philosophies are easiest to see when it comes to questions regarding Europe's military profile. Last December, a German initiative resulted in an agreement among 25 EU member states to launch joint defense projects. The French president, to be sure, also joined the initiative, called Permanent Structured Cooperation, or PESCO. But the fact that he is pushing a competing project would seem to indicate that he doesn't believe in the German initiative.

In his Sorbonne speech last September, Macron presented the idea of a "European intervention initiative." The idea is that of forming a coalition of the willing under French leadership to be able to react militarily to crises and conflicts. "We want to strengthen diplomacy, the French want to strengthen the military," say one German cabinet member.

Back in March, Paris spoke with nine potential partners, including Denmark and Britain, both considered somewhat on the outside in the EU. On the issue of defense, Denmark negotiated an opt-out for itself several years ago while the UK will be leaving the EU in March 2019.

Florian Hahn, a defense expert with the Christian Social Union (CSU), the conservative sister party to Merkel's Christian Democrats, was briefed on the plan in the Defense Ministry in Paris and is extremely skeptical. "I'm not sure if it makes sense to configure a third form of military cooperation in addition to the EU and NATO," he says. Within the Social Democrats (SPD), Merkel's junior coalition partner, even the name of Macron's crisis reaction plan is enough to make them turn away. "With us, you can only lose with the term 'intervention,'" warns one senior SPD party official.

The SPD is also less than enthusiastic when it comes to even equipping the Bundeswehr, as Germany's military is called. During last year's election campaign, the SPD referred to the NATO target of increasing defense spending to 2 percent of gross domestic product by 2024 as a "rearmaments spiral." In the budget debate, Finance Minister Olaf Scholz of the SPD would only agree to an increase to 1.5 percent, a position that infuriated Merkel's conservatives.

"The current plans of Minister Scholz ignore the urgent needs of the Bundeswehr," reads a paper drafted by defense experts from the CDU and CSU. The experts claim that the defense budget would resume falling again after 2021. "Conservatives won't allow that," says Johann Wadephul, deputy floor leader for the conservatives in Berlin. "Such a mid-term financing plan is clearly in violation of the coalition agreement."

Conservatives say that an underfinanced Bundeswehr endangers Germany's ability to act overseas, a critique that Paris shares. Last year, Paris invested 2.3 percent of its GDP in its military.

A further sticking point for Macron is the fact that the German parliament must approve military missions overseas, a provision that is often referred to as the parliamentary caveat. Back in 2015, a commission led by former Defense Minister Volker Rühe proposed a cautious reform of the parliamentary caveat. But it wasn't acted upon. "We passed up a great opportunity to demonstrate our reliability to our partners while maintaining parliamentary control over overseas missions," Rühe says today.

Now, only a minority of parliamentarians belonging to Merkel's governing coalition continue to support a reform. "If Germany wants to be reliable internationally, our partners must believe that we can act quickly if needed," says Fritz Felgentreu, an expert on defense issues with the SPD.

"I can understand the French skepticism of the German parliamentary caveat, particularly if we want to develop the strategic culture that is necessary," says CDU foreign policy expert Roderich Kiesewetter. "We need a parliamentary caveat that is consistent with Europe's international commitments."

But as significant as the German-French differences are when it comes to reforming Europe, it would be even more dangerous if Trump were able to drive a wedge between Paris and Berlin on the trade conflict. And it wouldn't be difficult, because the two countries also have differing interests here too.

The Germans would like to see the European Commission negotiate a deal on industrial tariffs with Washington to avoid punitive tariffs on the European automobile industry. But Macron has no interest in making concessions to the Americans. He fears that Trump may target agricultural products next - and that would negatively affect French farmers. And Macron's concerns are not unfounded, as Germany leaders in Berlin know full well.

For the Germans, however, when it comes to the relationship with the French, nothing is currently more important than jointly repelling Trump's attack on the German automobile industry. In Meseberg, the Germans will thus have to offer the French something in exchange for their support in the stand-off with Trump.

From the SPD perspective, it is Merkel in particular who must make a move. It's good that the chancellor finally responded to Macron's proposals, Foreign Minister Maas said in his speech last week. "I firmly believe that we also need ... courage to throw some of our own orthodoxies over board." 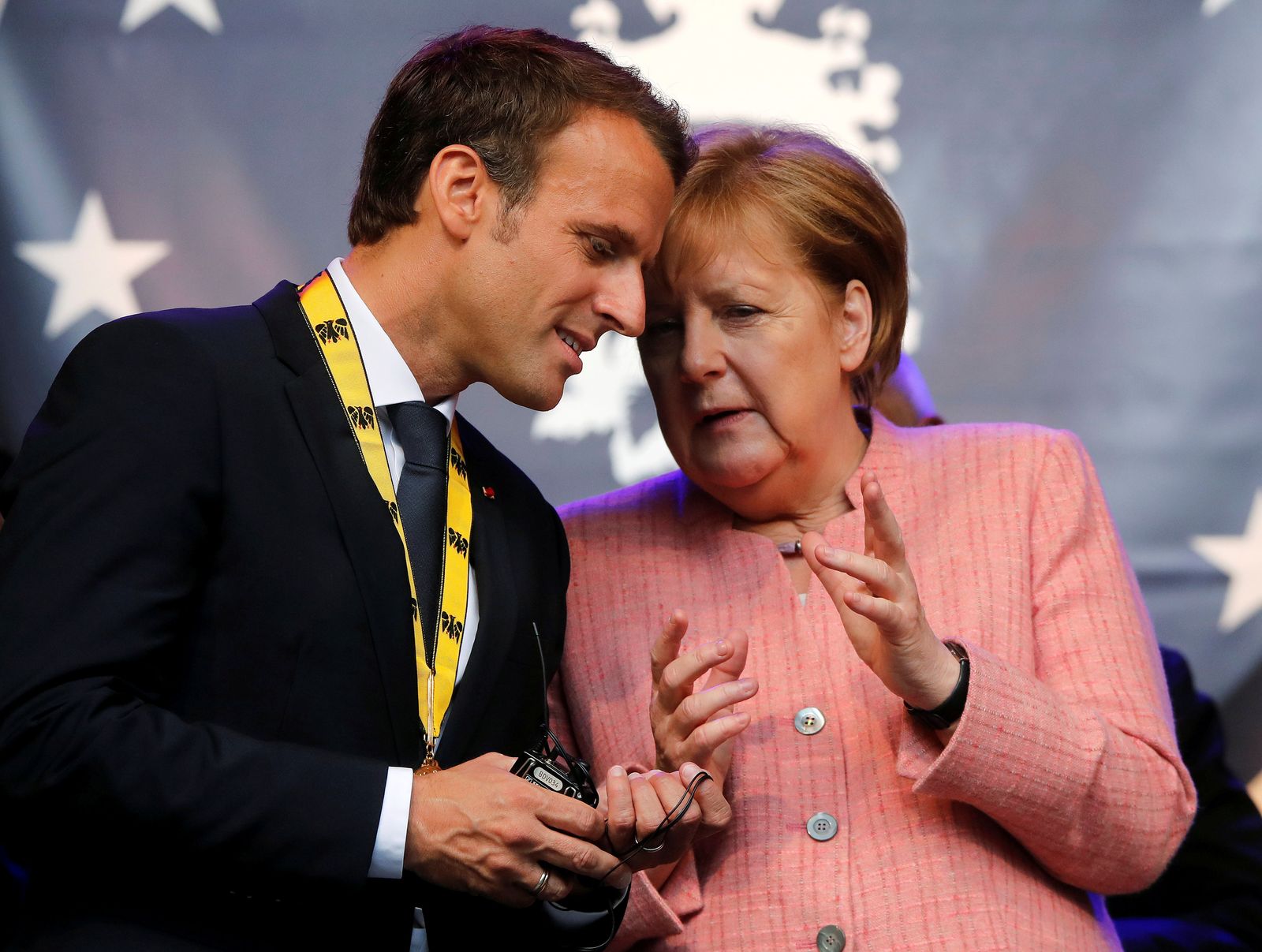 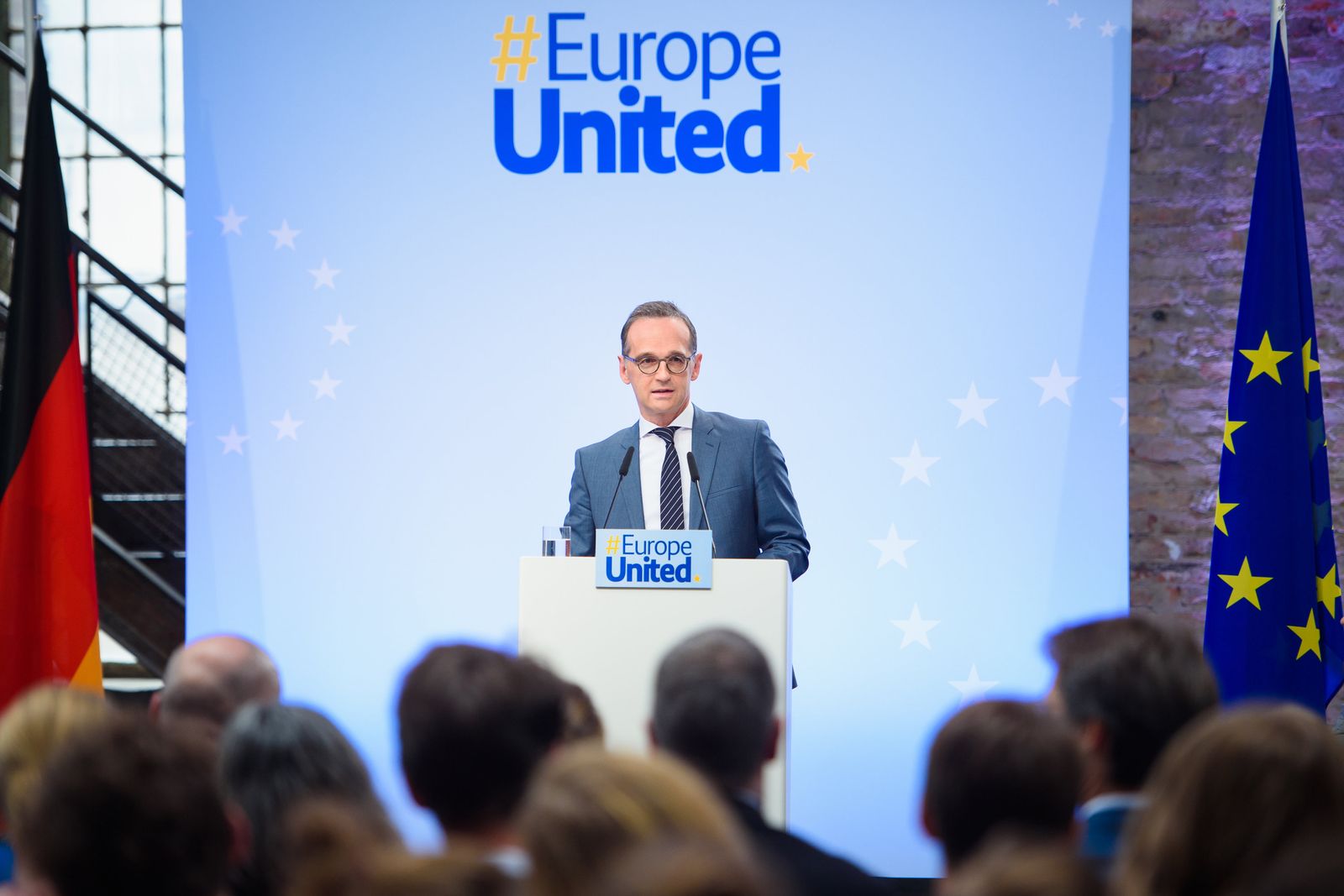